quick before the hubby gets home!

I should be sitting at this desk and computer paying bills, but the hubby isn't here yet, so I'm gonna quick share my quilting from the past week!

I finished the blocks for last week's Very Vintage Christmas sew-along before the next set was assigned on Friday. 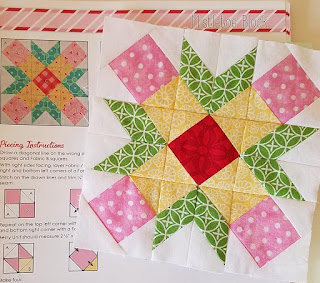 This one was fairly difficult and required some ripping of seams.  I think there may have been a better way to construct this, but was not in any mood to figure it out just then.  It's a lovely block, but I don't see any more of these in the future!

Then number 20, putting me very near halfway done! 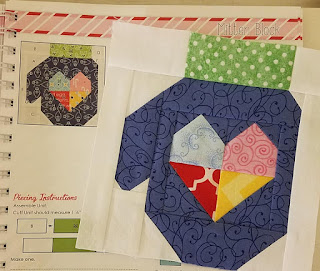 A super cute mitten.  And that blue for the main part?  I rescued that out of the trash at a sew-in group I belonged to many years ago.  It seems to have been cut as border strips or something.  I have no idea, but I still have a bit of it and am hoarding it for life.  I don't know why, but I adore it still.  My tastes in fabrics and block styles and everything have changed a lot over the years, but this fabric is still IT.

Thanksgiving happened in here - lots of eating!  And I worked Black Friday.  My first experience working the day in retail.  I didn't open, so I didn't experience the mad rush at 6am, but when I arrived at 10am, the store was calm, customers were kind and patient, the lines weren't very long (and the other cashiers said the early rush wasn't even that terrible!) and the store wasn't even in that bad of shape.  We stayed relatively, but not crazy, busy until about 2pm and things dropped off significantly.  So the other cashier and I traded on and off who was at register and who was working to straighten the areas near us, with an eye towards the line getting backed up so we would come back.  And I know there are other stores out there that were probably a mad rush with a clientele that are less likely to be patient (farmers...well, they sorta have to be!), but I am thankful that it was as easy as it was.

I managed to have the following weekend (both Saturday AND Sunday) off, but Saturday, after a round of morning sewing (the hubby had Thursday and Friday off, but not the weekend...go figure!), I started to feel not so great.  Symptoms were as described by one of my cashier coworkers...well, we share the same area most days, so it didn't surprise me I caught it...but at least I had an idea of what was ahead.  Nothing as terrible as the last round that knocked me out for 11 days and I was STILL coughing from it when this hit.  I took it easy Saturday evening and most of Sunday, though I did make a run to the grocery store...partly due to the predicted snowstorm (we did get 7" - an inch more than the high predicted, but we survived just fine!) and partly because I knew if I was sick, I'd better have hubby-friendly foods (bologna and white bread, Little Debbie snacks, etc.) around so he wouldn't "starve"...as if...  Anyways, this cold hasn't been terrible, but I'm trying not to overdo things!  The worst right now is I'm on day two of almost no voice - that's hard to do when you're a cashier!!!  (Also hard when you have an Emma-No who is training a Gabby-No!)

BUT...I did sew all five blocks already this week! 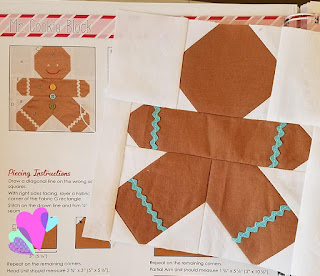 I snagged that awesome turquoise ric-rac from my mom at Thanksgiving.  I think it adds more pizzazz than the white (which she didn't have). 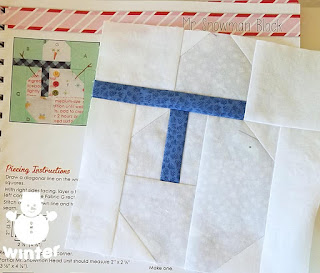 I had to go stash-diving to find something that would work for a snowman on a white background.  This is leftover from the Tula Pink kitty plus quilt I made earlier this year and, other than that one butterfly hanging out on the snowman's shoulder, does look a bit like snowfall on a grey day!  (Though one gal at my local quilt shop suggested I make him yellow...oh Janice...) 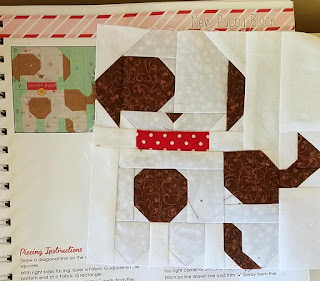 This little guy.  Oh. My. Goodness.  Lots of pieces, lots of lost corners, lots of trimming and lots of ripping and realigning things.  But he's so doggone cute!  And look - I used the grey-white again!  (It's not showing up quite as distinct from the background in these photos as in real life, but many of these photos were taken after work...in the evenings...) 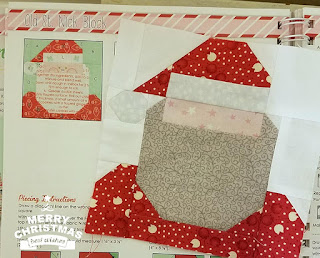 Grey-beard Santa!  Another of those I had to figure out how to make it not-white.  Stash-diving again produced this grey.  I was actually looking for a white-on-white that had swirls printed on it, but never did find it.  (I think I used it up a while ago, but you never know...)  I think he looks great.  And who's to say he has a white beard anyways?  I've never seen him!

Also, this red is in the stash with the same status as the blue.  Hoarding for life. 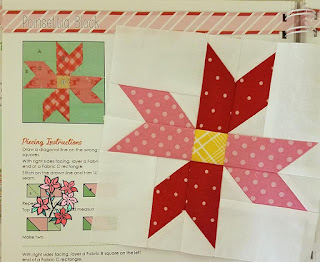 This one was so easy.  I'd say like cake, but I've made a few cakes that were far harder than this little block!  I'm thankful for an easy one mixed in to the bunch.  (The snowman wasn't bad...once I wrapped my head around his scarf...)  I've peeked ahead and it looks like next week there will be more traditional-looking blocks, which will be a nice change from the character-based blocks.  The quilt seemed to have a good balance, but I felt like I was doing a lot of character blocks lately, so now we swing the other direction!

I still have embroidery to do on quite a few.  Last night I finally did the reindeer and ice skate, both of which had a fair amount, so the few that are left will be easier.  And some of the details I'm going to use buttons or beads for after the quilt is quilted.  (No need to try to quilt around tiny buttons and accidentally break a needle (or worse) instead!)

Today I have the day off work (as well as the next two in a row!!!), so I tidied up the house, being mindful to not overdo things (I want to get better fast!) and then relaxed on the couch with my graph paper, crayons and a quilt photo for inspiration.  My middle niece on my side of the family is graduating this year.  She and her sisters have attended a Christian school for years and this niece is the one that finds the most solace in the church teachings, so I thought this pattern would be wonderful.  But she also has a very curious, intelligent mind, so the tessellating pattern is a nod to that.  Sadly, there is no pattern or even a link to anything that could help me.  So I pulled out the graph paper and made a drawing.  It's going to be a doozy to get together and require a lot of attention, double-checking and some sort of design wall, but I'm excited to make it for her!  Now to decide on colors...hmmm...

And now, being caught up on Christmas blocks for the week, UFOs for the YEAR (!!!), I think tiny stars will take center stage for a day or so.

But first, I'd better look like I'm busy paying the bills, as the hubby is due to come through that door any minute!

PS I put up my Christmas tree the other day... 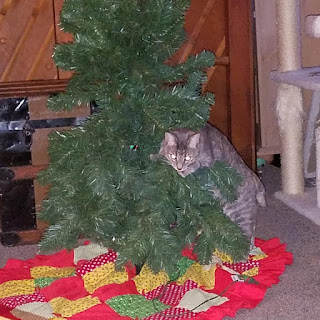 ...Gabby is bigger and has a shorter tail, but is having much the same fun as last year... 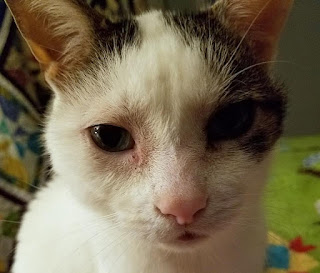 You've certainly been busy!! I'm glad you survived Black Friday - and got both Saturday AND Sunday off. Great photos of your helpers - Emma-No is training Gabby-No - too funny - ;))

With all you do, working, etc., I can't even imagine how you have time to sew so much! Yet you seem to have something going all the time! What' more, all of it is really cute or very pretty. My machine is totally closed down, and hopefully the cabinet will soon be covered with Christmas! ---"Love"

I don't even like to shop on Black Friday, I can't imagine what it would be like working and having to deal with crazy customers! Glad you got through it without too much trouble. I did like being busy when I was working though, it made the day go by so fast! I am loving the Christmas blocks, they are so cute and your fabric choices are wonderful! This will be such a cute quilt. Love the kitty in the tree, much mischief there and Emma is a cutie. Enjoy!

That Christmas QAL is looking sharp. Sorry to read that you have the lurgy and hope that by the time you read this, you have improved.