It's another slower week between challenge prompts, so I've been sewing some, but thought another of the 2019 finishes should be presented!

Today we'll work though Casey's quilt.  It started out as the Little Miss Sawtooth quilt along.  I was intrigued and loved the mixed low-volume backgrounds.  I'd never done anything like this on my own (I had done it with a kit), but thought it would be fun.  But I wasn't sure what to use.  And almost talked myself out of it.

Then inspiration struck!  I had a fair amount of leftovers from Adrian's quilt.  A little time spent with the coloring page (and some scissors) and I had a plan.  I wanted it bigger and the sides evenly spaced, so I came up with a plan. 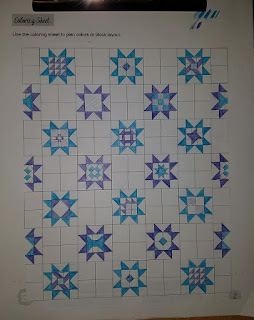 And then further inspiration: Adrian's best friend could use a quilt, right? 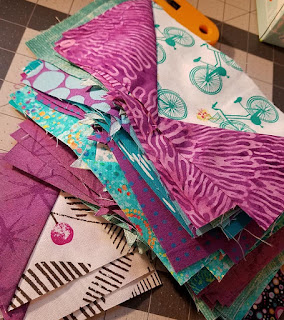 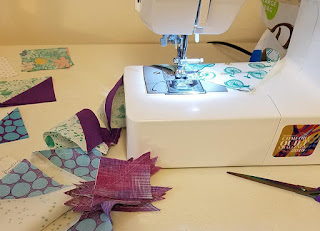 I sewed along with the new patterns that came out every other Friday.  Some weeks they were done earlier than others, but I never got behind.  Even when I had to make extras of the blocks to fill up my coloring sheet plan.  (Individual blocks were shown as I completed them here on the blog, but in the interest of keeping this from being a marathon, I'll leave those out today!)

I sewed the alternate blocks leader-ender style, instead of waiting until the end, so I would have a little more time for top construction at the end. 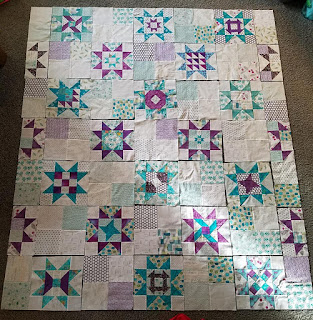 And, after what seemed like forever, I was ready to sew it all together!

Next up I needed a back.  Off to the local quilt shop sale room for the best bargains around! 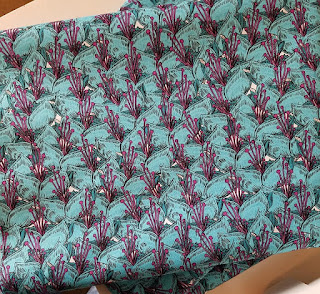 While this is obnoxious, it works for me.  The colors are perfect and it will hide a multitude of longarming sins, if needed. 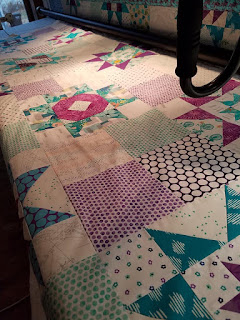 I didn't do fancy quilting on this one.  I just couldn't figure out WHAT to do and time was getting short.  So just an overall swirl flower worked for me.  It went fast and will make the quilt more snuggly, right? 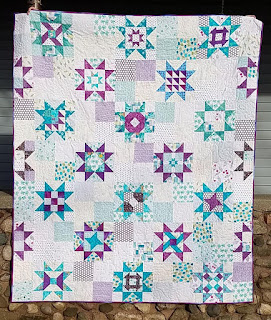 So at this point, knowing I was going to make it, I asked my niece if she wanted to give it to her friend.  Of course she said yes!  So I labelled it and packed it up for Christmas.  This friend is often around for holiday family gatherings and has earned the title of niece just by being around so much, but this time she wasn't able to come.  (I can't say I blame her parents - it WAS Christmas day after all!)  The quilt went home with my niece and her family and was given to Casey the next time she was visiting.

And while I know Casey gravitates towards golds and burgundies (I've taken the girls shopping a few times), these are Adrian and my favorite colors, so I think it's okay.  I haven't seen much of her since the holiday (Adrian moved in with her mom and is only with her dad on weekends, so until summer rolls around again, the girls won't be around as much), but I think she liked the quilt.

What have I been working on since the last challenge ended?

Well, I've been dragging myself into the Triple Crown project.  For whatever reason, this one started off with a bang, but my interest has waned since.  Perhaps it was the days off midway through?  Or maybe just the realization that there are 204 triangles to be dealt with?

Regardless, last Friday I talked myself into laying out all the triangles.  The hubby watched.  He watched the cats help.  We have a laser light - he could have at least distracted them with that, but he was "busy"... (*eyeroll*) 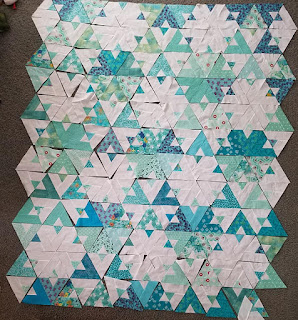 The first layout needed work.  There were a couple of fabrics that had more than their fair share of blocks, so I needed to make sure they were dispersed evenly.  And I also wanted to make sure that the lighter and darker blocks weren't clumped too much.  But I knew that I could spend all day tweaking this, so decided to call it quits before too long. 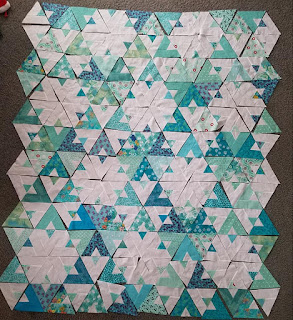 Then came the long task of picking everything up in rows.  But I could see the end, so I kept going.  (And by this time, the cats had decided to do other things, so at least I didn't have to defend my layout any longer and could focus on picking it up properly!)

The rows seem to take forever to sew.  There are 17 triangles across a row and 12 rows.  I sewed them in sets of two - leader-ender style - and that made it even seem LONGER.

But today I have all the rows sewn together. 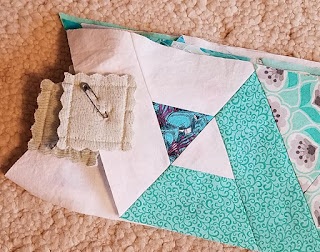 They're all piled up in one long row-stack, as there are still a fair number of bias edges, so I'm trying to avoid handling, folding, and draping them.  I'll work on sewing them into a top in the coming week, as my goal is to have them into a top before the next Project Quilting prompt comes out - 1pm on Sunday (my time).  Even with three shifts at work this week, I think I can do it.

(I can do it if things stop hurting.  I managed to pull both hamstrings while laying out the quilt and then, as that eased up, I have re-aggravated a back injury - while sleeping!  I'm not complaining and know continuing to move helps keep the muscles from hurting worse, but darn it, getting older is not fun some days!)

Last but not least, I've promised to give away the last of the green fabrics. 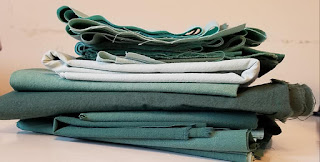 It's definitely a smaller stack than I started with and definitely leaning towards the darker greens, but I'm done with it and just want it out of my stash.  Some of the fabrics are faded (as though they were stored, folded, on a shelf exposed to sunlight) some seem to have water spot stains and others have odd splotches that may be from dyes not being fully mixed.  They are by no means perfect, but they are free and I'd guess this is at least a couple of yards.  No itty bitty pieces - the smallest are a few 2" strips - and I think the largest pieces I saw were about a yard.

If you want the fabric, mention it in a comment.  (If you want to comment, but not be entered, that's okay!)  I'll draw a winner Friday afternoon and hope to have them in the mail to you Saturday before the post office here closes at noon!

Casey's quilt is beautiful, I love the fabric and color combinations. Great way to use leftover fabric and it is a super cute quilt. The backing fabric is perfect for it, it coordinates well with the colors on the front. Just perfect! Triple crown is shaping up. I love the colors and fabrics in there, too, but all those triangles would be daunting to me. I can see it takes a lot of care in the layout but you are making great progress. I will pass on the green fabrics, I have more fabric in the stash than I know what to do with now. They did make a cute tree quilt though.

I'm sorry you're hurting - and agree that getting older is not fun some days - especially when you have to learn the names of body parts that you didn't even know you had - and "ice" becomes your new best friend - LOL - ;))

Ditto on what Marsha B said - I love the backing fabric that you chose for Casey's quilt - it's perfect! Triangles are one of my favorite shapes - but NOT those with bias edges - so I would pass on that pattern. Your layout is great and I'm looking forward to seeing how you decide to quilt it.

Green fabric - faded - water spots - splotches - may sound imperfect to some - but none of that matters in my "confetti" quilts - so YES - please enter me in your "give-away" - LOL - ;))

Oh Katie, this (Triple Crown) is beautiful. I love everything about it - the pattern, colors, and the workmanship (neat points). The understated elegance is fantastic. It is a labor of love and it comes through beautifully :-)
Sending lots of hugs and feel-good wishes so that you may feel 100% yourself soon.

Your star quilt is beautiful! You may have thought the backing is obnoxious, but when I first scanned your post, that backing grabbed my eyes! My quilting buddy was here, and she agreed it was the perfect backing for your quilt. It looks like those little sprigs are just popping out of the background. I love it! ---"Love"