The weeks seem to be flying by.  I'm not sure if it's because I know Christmas is coming or what, but I guess if the winter months pass faster (and we're not even really into winter yet!), I'm okay with that.  I prefer the warmer weather of spring and fall...

But I have been carving out sewing time between all the other chores and shifts at work.  (Extras of the latter because of the holiday rush that has already started...but don't worry...it's gonna get worse!)

After I finished my "assigned" Christmas blocks last week, I decided to dive into my Arcadia Avenue project.  The last block was my UFO for the month, but putting the whole top together was not on the list.  I hoped I could fit it in somewhere (and when I completed an extra UFO while on vacation this summer, I knew I had a month!), and last week was it!

But holy cow did that thing get crazy!

I don't have any in-progress photos because I was kinda overwhelmed with just the sewing part.  I left most of the papers in, hoping it would help stabilize the edge seams and whatnot.  Perhaps I could have pulled out some of the more inner pieces, but once you pull one, the others start coming...and they were doing a healthy job of that on their own!

It got HEAVY and bulky and awkward to say the least.  But I persevered and got it done!

I layed the whole thing out in the middle of my living room because that's the only room large enough to lay it out and still be able to walk around it... 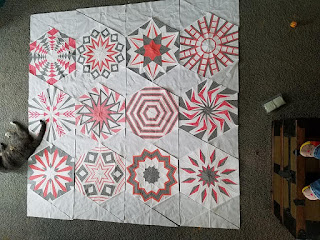 ...and then climbed on top of an old trunk and took a photo.  While Lexie lounged at the other end.  (See my toes?  Those socks with the kitty faces on them were a Christmas gift my dad picked out last year.  My mom thought he was nuts, but they are WARM!  Meant to be slippers, with little grippy dots on the bottom, they are my go-to for days off or inside boots to stay warm!  I LOVE them!)

Up and down the stairs a lot (the living room, alas, in on the main floor while the sewing room is tucked away upstairs) to keep the arrangement correct and help with aligning seams (they're pieced on the diagonal-ish at this point), it took probably 5 hours.  (There may or may not have been short breaks of exasperation in there...) 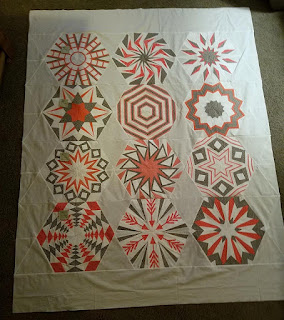 It was rather dark outside at this point, so my true white background does look grey here.  But I assure you, the background is all white.  (It also looks varied because some of the papers are in and some are out.)

All that was left to do was pull the papers from the blocks.  What remained.

There were a lot, despite Gabby's efforts to help earlier in the process...she also helped in the actual process, but mostly I had to ball them up and toss them across the room to keep her occupied...and not clawing me from somewhere inside the project!

I sat with it while watching television and it took about three hours to get all the papers out.  I had my super-pointy tweezers next to me and a trash can in front of me and I went to town.  It was still awkward (and heavy...each block had about 6 sheets of paper in it...multiply that by 12 blocks and that's a nice stack of paper!), but as the papers came out, it got softer and easier to manipulate, but this is not my favorite part of paper piecing.  Well, to be honest, no part is a favorite.  I'm not a fan of the technique (I can't get the accuracy some folks claim can happen, but I also haven't invested a lot of time in learning their tricks because I don't want to have an excuse to use the technique!), so no step is my favorite.  Except maybe the part where it's done!

So the quilt is done.  It took about two and a half years to get it finished.  Okay, three and a half...I just went looking and found this post where I started it and shared the first round of sewing...  It feels really good to have it done.

But now...how am I going to quilt this?  The centers have like 40,000 seams all coming together.  Other parts have nearly as many.  I'm not sure my longarm can handle that.  I mean, it's a beast and all, but I don't want to ruin it...the longarm or the quilt!  This is going to require some thinking and procrastinating.

Then there's the Christmas sew-along.  Five more blocks were "assigned" last Friday and I've managed to get three done.  Another is on deck (I hope!) tonight, but again with the extra shifts at work (the bigger paycheck will help with holiday bills...just keep swimming...), time has been more limited than before. 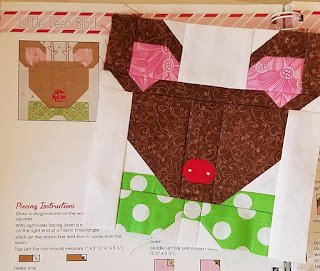 This adorable reindeer needs eyes and antlers.  I'm thinking buttons for the eyes, but need to get my behind in gear on the embroidery for the antlers.

Also, I did NOT plan those dots on his nose.  But they make me giggle. 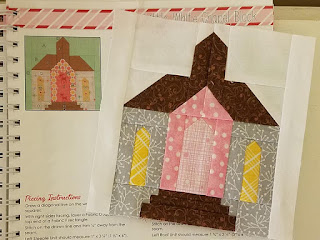 My "little white chapel" needed to be not-white for this block to work.  Since my backgrounds will all be white.  I kinda wish I had done darker grey for the doorway opening instead of a pink, but it's okay.  Only I'll know what the original looked like, right?  (Maybe a more stained-glass-looking windows, too?)  And this one makes me smile, too, because the door fabric has a dot placed right where a doorknob would be!

Also, I feel this is missing a cross in there...hmmm... 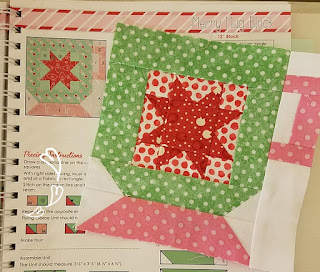 And last but not least is this sweet mug.  The star finishes 3" and I had some issues with the points, but the background of the star is busy enough, you'll not notice unless you get your face in there.  Please don't put your face in there, okay?

Also, I have a dot problem.

And last night, lying in bed trying to get to sleep, I saw a better way to make the handle.  Less angular.  But I am not ripping this out.  Yet.

So that's it.  Tonight I expect to be making a block called "mistletoe," but it looks more like a traditional block than these three.

Oh, and my makeshift light box so I could trace lines that need to be embroidered... 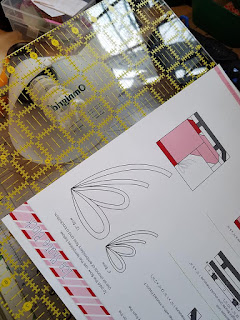 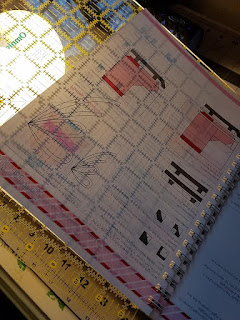 ...and it works!  Since the book is so heavy, holding it up to a window would probably prove a disaster.  This wasn't as ideal as an actual light box, but since I don't have one (hmmm...Christmas ideas for the family...), this worked well enough.

Now I just have to do the actual embroidery...it's sitting there next to my chair in front of the television, but do I pick it up?  Nope.

Off to work on the next block.  I have to work tomorrow (we have a pre-black Friday sale starting at 7am), at the boss' request for extra help beyond what she initially scheduled (yep, you saw "sucker" on my forehead earlier...), and am scheduled to work black Friday (but got super lucky that a coworker wanted my early, opening shift so she could prepare for houseguests, so I got a 10am-6pm shift instead!).  It's gonna be insane, but I'm gonna kill 'em with kindness.  Nothing else I can do, really.  Being grumpy isn't going to solve anything.

Is there any way you can trim down the inner seams on that arcadia quilt? I was thinking that it should make it easier for your machine to go over it if you can. I know that's not always possible, but I thought I'd suggest it just incase. Raising the foot a bit sometimes helps, too; I know it does for me when I'm doing thicker quilts. I'm liking your other blocks ( but not enough to want to do them myself)... the reindeer has two teeny tiny snowflakes on it's nose :).

Your newly finished quilt top is going to be well worth the time and effort when you get it quilted! It truly is beautiful! My son is dreading Black Friday too, but I'm not. I'm sleeping in; not even going to set the alarm! I cooked late last night and again this morning to take goodies today to be with him, my DIL, her family, and my grandson. It was definitely worth it, but I'm tired tonight! Hope you had a Happy Thanksgiving! ---"Love"

Wow, Arcadia Avenue is an impressive quilt, I'm glad you stuck with it and it is finished. Those blocks are so intricate! I don't enjoy paper piecing either but your results are so nice. Your Christmas blocks are darling, the quilt will be so cute. I am tempted to put the book on my Christmas wish list but I really don't need another Christmas quilt. We'll see. I hope Black Friday isn't too crazy for you, I don't get out in the crowds to participate. I tried it a couple years when it was a new idea, did not enjoy it a bit. Hope you get time to relax and sew as much as you want over the weekend!

Your Arcadia looks GREAT! You could try quilting up to within a 1/4" of those center points - rather than trying to quilt "through" them - you might break a needle or the longarm. I did that on one of my quilts where the patches "finished" at 1" square - I thought of stitching "in the ditch" but decided to quilt down the center of the patches instead - avoiding the spot where all of the seams came together. It was much easier and looked pretty good.

Your Christmas blocks are cute. The chapel doorknob and the reindeer nose dots are perfectly placed! And I like the idea of buttons for eyes - or googlie eyes - ;))