My first UFO for Judy's 2017 UFO challenge is done.  (That is, if you don't count the elephant quilt I added as a December extra and finished on New Year's Eve...)

I saw this gorgeous quilt - totally not my usual style - in a booth and had to have it.  Of course, they were sold out of kits, so I ordered one.  Turns out the shop I ordered from is close to one of my aunts - in my communications with them, they confirmed they knew her.  800+ miles from home and they knew my aunt... 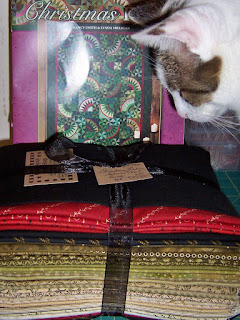 (Emma approves.  She usually does, but sometimes not that I'm taking photos when I should be feeding her - which is All. The. Time.)

I'm usually a bright, modern gal, but this quilt just grabbed me and all these years later, I still love it.  (But the leftovers went to my mom - a Civil War repro lover.)

I started on some of the arcs way back then...

Paper piecing...bleh!  But again, I persevered because I loved what I knew I was getting in the end.

Then it seems I hit a lull for a while and didn't do much.  To be honest, I didn't do much quilting at all for a few years.  Life got harder and I had quilts that needed my attention, so this got the back burner.

In 2014, I worked more on them while on my yearly vacation to Drummond Island. 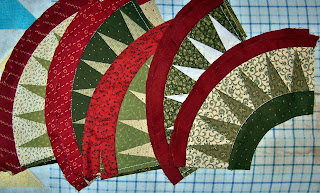 And then, the following week, at my guild's yearly retreat, I made a LOT of little (4") pinwheels. 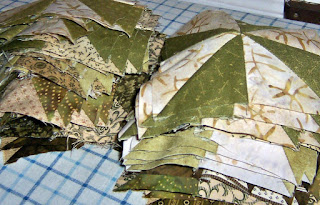 I used a technique here where you draw a grid on the lighter fabric and sew along the lines, then trim along other lines and have a pile of half-square triangles to press and trim.  I used a heat transfer pencil and word to the wise: it goes THROUGH batik, does not transfer TO batik fabrics very well.  (I made some fancy lines on the ironing board cover, though...oops!)

The scary part was sewing those arcs.  I had a few more pieces to sew in before I had full blocks, but with lots of pins, lots of patience and LOTS of deep breaths, I got them all together with minimal fuss.  (Guess I'm more of a quilty rockstar than I thought?) 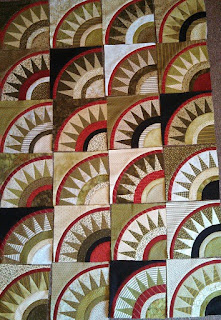 Then I had to lay everything out.  The hubby was gone for a business trip and I was off work or something - I vaguely remember being home alone and allowed to spread out all over the living room floor with complaints only from Hungry Emma.  There were a LOT of pinwheels, but few enough color combos that I needed to lay everything out.  (I do not have a design wall - I don't really have a good wall to put one on, so I envy those of you who do!)  I didn't want too much touchy-touchy of the same fabrics. 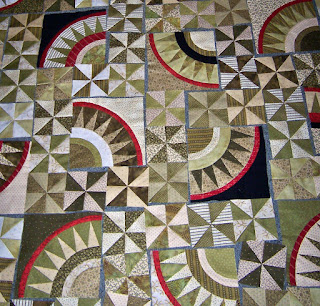 Part of the layout.  Getting all the arc parts going the right way was a challenge, too - they don't all just go one direction like a nice little lineup of soldiers!  (But I like it this way.)

And this photo helps me remember that I DID in fact take over the living room floor.  So that means it was likely the hubby wasn't home.  (He's pretty tolerant of my crazy, but sometimes I push it too far, so I gotta watch what I do and when I do it!)  You can see I set up my machine at a TV tray and rolled my desk chair over to it.  This was the easiest way to keep all the parts straight...back and forth from the floor to the sewing machine over and over and over.  Don't leave it unattended, though, because Luka likes to help rearrange blocks... 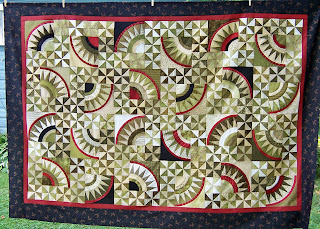 Clearly it was warmer out when this photo was taken.  Note the green grass.  And if you look closely over there on the left you can see my hostas.  So it was definitely summer 2014 when the top was finished.

I purchased a back for it sometime after this and then stalled out.  How to quilt this?  If you say "Feathers" I'm going to throw a shoe at you.  I don't like feathers that much.  And I'm not good at them.  And because I don't care for them, I have no desire to practice them.  Okay?

Doodle here.  Doodle there.  I found doodles I made at work before September of 2015 (I remember doing them at my old lab before they moved us out to BFE and the upper management at HQ started telling us we're "overstaffed" and don't attend meetings at HQ (30 minutes each way) any more and we're a bunch of lazy employees.  If they only knew...there is no more doodle time.  There's no lunch time.  There's barely bathroom time any more!) and a few from home after that.

I had good intentions.  I really did.  I really, really, really wanted this quilt finished.  But I just couldn't figure out how to quilt it.  I have that longarm, but envy those who just know how to quilt stuff.  Sometimes quilts tell me, but this one was being stubborn.

I doodled some more and finally saw that if you connected the red, skinny arcs (use a little imagination here), you get an apple core design.  While I didn't exactly quilt the apple core design, somehow that allowed my brain to free itself from the tangle and settle on a quilting motif! 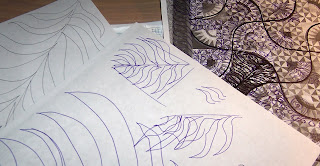 I pieced the backing - cut that large piece in half and sew it back together the other direction and it should be good, right?  Usually I buy backing so I can do just that.

Turns out I didn't buy it that way.  Or I did the math wrong.  Who knows?  That was probably 3 years ago!

Unload.  Ask the hubby to help me lay it out on the floor (after moving a few small pieces of furniture so I had room to do it properly) and make sure that if I cut off some on the end, it would be enough for the sides and not short me on the end.  Okay.  All good. 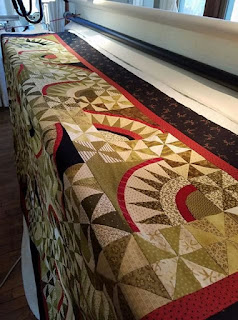 Lots of deep breaths and prayers to the Longarm Gods.  (Perhaps a blood sacrifice should have been in order?  Too bad I use Red Snappers to load, or I might have done it unintentionally with pins!) 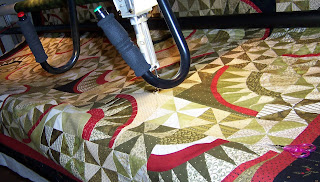 I was having a little trouble with my motif.  As you saw from the whole quilt layout, the blocks rotate directions.  That means, on the longarm, your motif has to rotate, too.  I could do a decent job going two of the four directions.  The other two?  Well...you can probably pick those out if you see the whole quilt...

But I have to wrestle this thing around to sew on the binding.  (I have a friend who knows how to attach the binding with her longarm.  I think I might have to pay her a visit...) 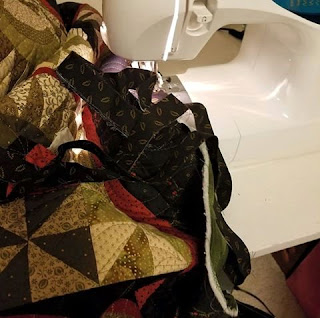 A few weeks of slowly working around the 37 sides the quilt has now manifested (and sewing purple stuff...) and finally the binding is done, too.  I was waiting for a nicer day (you know, the kind with sunshine...a rarity in January where I live), but I settled for Not-Snowing yesterday and made the hubby hold it up outside for me. 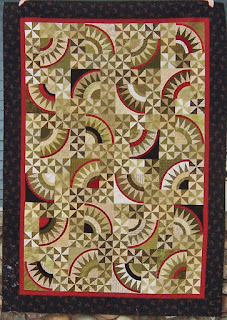 And a few closeups of the quilting.  Please don't judge.  I'm still learning!

(and it seems I need to hit this with the water bottle, as I forgot I marked the quilt with blue water-eraser marker...) 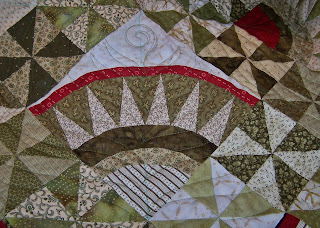 (it's not the easiest to see...perhaps a shot of the back will help?) 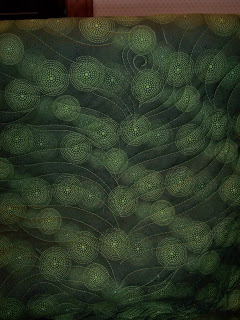 (at the very least, you can see my cool back fabric...yes, let's focus on that and not my quilting abilities, okay?)

Now I'm ready for the February number to be drawn.  I'm excited, even if it means tackling another quilt I'm not sure of.  I'm motivated to complete this challenge and have 13 at-least-throw-sized quilts finished by the end of 2017.  It will deplete my Closet of Shame by almost half, though I'm sure I'll add a few new tops before the end of the year...ummm...sorta already have one...

It is gorgeous and I know you are thrilled to have it done. You did a wonderful job with the quilting, too. I will stay tuned to see what number is drawn next! Enjoy it!

Oh yes, Katie, you definitely are a "quilty rockstar"! Don't ever forget that; you've just proven it! That is one gorgeous (and complicated!) quilt! ---"Love"

Oh, Katie, I love this quilt. Green is a personal favourite of mine, and I love that you persevered with all of that paper piecing. I am excited to see what you get to work on next. Almost makes me wish I had lots of unfinished projects (almost).

What an amazing quilt!!! The quilting looks wonderful, too. You must be very proud to have finished it - it has quite a story.

Love the quilt, Katie!
I envy you! I don't have space for a design wall or a long arm machine!
Your quilting looks great and I bet the finish feels even better! Congrats!

What a beautiful quilt! And congratulations on finishing something that has been waiting for a while.

what a fun blog post- I really enjoyed reading it. The quilt is just stunning - really stunning. congrats

Oh, Katie - it's BEAUTIFUL!! You are definitely more of a quilty rockstar than you thought!! And being able to "see" the "apple core" design in the first place was sheer genius - good for you!! - ;))

Gotta call this gorgeous! I love CW and modern quilts too. Congratulations for perseverance through the many stages of the quilt!

I read this post and enjoyed every word. Amazing is all I could think. The pickle design looks so hard to me and to think you quilted it yourself too. It is beautiful truly.

Congrats on a gorgeous finish! I enjoyed the story behind the finish. It has to feel so good to that one off the list right off the bat.

What a gorgeous quilt - well worth all the effort! I, like you, have a longarm, but don't have the "know how to quilt it" gene. I think you did a great job! And I know what you mean by being DONE - that happens about every 5th quilt for me! Good luck as you continue on the UFO challenge!