Not having a formal job (who says housework ISN'T a job?!), having no rigid schedule I must conform to, has already started causing problems!

We all have that mental list of stuff we'll do when we retire, right?  Or when we're "older."  When we have the time.

Well, it seems I now have the time.

So I started doing whatever.  I started new projects.  But I didn't finish them.  Thankfully I haven't gotten myself in too deep yet, but it's happened.

For example, I pulled out bags of bits and scraps and made two dolly quilt tops.  And then, as I was lying in bed the night after I made the second one, guilt started inching in.  Why did I start another top when it would have been so easy to just quilt the first one instead?

So I resolved, so early in my new employment status, to move things forward.  It's okay to start a new thing here or there, but not without finishing a few things, too.

I got up yesterday morning ready to quilt those dolly quilts!  (But first, every day, I am to make a rainbow scrap challenge block.  Then I can reward myself with a less forced sewing task!)

It didn't take long, and I even sewed the binding on last night as I watched a movie - a movie of my choosing because the hubby is recovering from a nasty cold or respiratory flu and was exhausted after working all day.  (He's doing better, just tired and still a little stuffy.)

It was raining ice chunks from trees yesterday (also cold and grey), so I waited on a photo, hoping today would be better.  Now we've got snow...and grey skies...  So inside photo shoot it is... 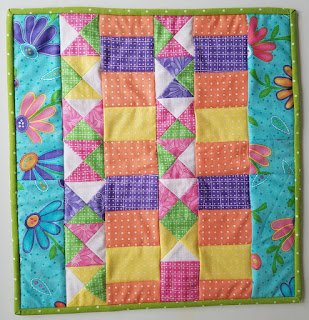 Neither are quilted fancy, but they don't need to be.  And they're DONE.  Off the list and two bags of bits and scraps are out of my sewing room...well, out in the form of dolly quilts I'll donate by the end of the year.  (The gal who collects them isn't at guild a lot, so it might take a few weeks of trying.)

I didn't have enough time last night, but next on my evening couch-sitting list is binding the UFO for the month.  Again, my initial goal, when working, was to finish the top.  But Friday I quilted it and sewed on the binding.  Moving it forward, sure, but not finishing.  It's about twin-size, so binding is going to take longer than a single movie, but it's feeling good to have a plan. 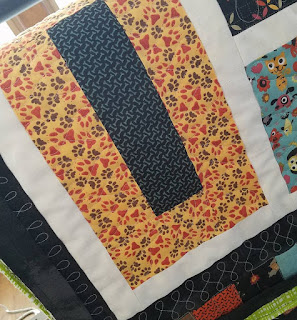 Also last night, before the hubby went to bed, I worked on the "seeds" from the Tula Pink Bird Seeds quilt I started last summer.  These seeds are going slowly because the require prep and I'm lazy.  But I prepped four (I need four from each fabric...I think...I have a list, so not to worry!) and there those sat, too.  So I got these out of the way first...no finished photo, but at least I have an in-progress this time! 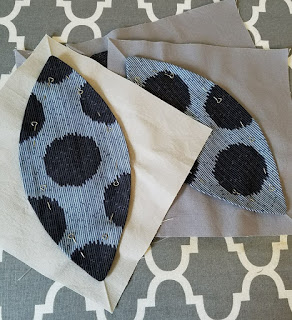 But there HAS been plenty of time for blog reading, Instagram-checking and general time wasting.  (Hey, I'm cleaning too...this morning I pulled everything out from under my kitchen sink (cleaning supplies, mostly) and scrubbed the shelves.  What a gross mess, but because a floral-smelling powdered carpet cleaner had spilled and caked under there years ago (yes, I know, I should have cleaned it better when it happened), it smelled mighty pretty!)

In the reading and looking, I have found a few more charity projects.

So, today, after my required rainbow scrap challenge block (two more to go this month!), I will be working on sewing some cats.  Turns out these are the same pattern from my rainbow scrap challenge cats from last year, just with borders.  The info is on Instagram here.  If the link doesn't work, there was a little girl named Emma.  She was only 6.  She passed away from Influenza earlier this year.  Her mom is trying to collect enough blocks to make a small quilt for each of the children in her daughter's class.  Such a tragic story (and an Emma to boot!), I can't say no to this one.  And I'll probably end up making way more than I think I will right now...

Also, and this one I am debating due to international postage, there is a call for blocks to make quilts for those affected by the tragic loss of an entire junior hockey team in Saskatchewan.  The Saskatoon Modern Quilt guild is leading the call and the blocks are simple.  I'm not sure if I have enough gold (my yellow stash is lacking, but gold wasn't a favorite in the first place...), but once the kitties are sewn, I'm going to see what I can find and think on it a bit more.  You can read the post here to get all the details if you're interested.  Such another sad, tragic story, but I'm so glad I'm in a position where I can do the things to help, even if I know they're small.

I'm not going to share my rainbow scrap challenge blocks today.  I'll save those for another post.

And until then - I'm going to keep telling myself "move stuff forward"...meaning stuff I've ALREADY started!

PS The ice storm.  We didn't lose power (we were lucky), but it left us with some beautiful contrast in the trees.  (And showers of ice chunks from the trees as it melted and chipped off the following day.)

(I took this across the parking lot when getting groceries (in a store with no power - generator-run make for a very quiet shopping experience!), so never mind the light post!)
Posted by Katie at 10:19 AM

Welcome to 'retirement' where you think you're going to finally get to do all those things you had on your mental list that you were saving... haha! Hope it works for you. I'm just not leaving the 'someday' mode and realizing that if I haven't done it by now, it's probably not going to happen.

As for the blocks for the hockey team, that's something that you could bring up the guild and I'm sure there will be one or two who would like to make a block and share in the expense of shipping ( I sent a small manila envelope at Christmas time and it cost me almost $10). Give me the details and I'll make one or two, too ( and share the shipping).

Still RIPing here and probably will continue doing so for another couple of days. Got one sore thumb right now. :(

Moving things along is satisfying. Sometimes I need to start something new just to get the creative juices flowing again, but when I start too many new things, I grind to a halt because I can't decide what needs my attention most urgently. I'm till working on finding that balance. Your doll quilts are cute. No long term damage done to your plans for those two little cute ones :)

Oh dear me! In the first several paragraphs of your blog, I felt as though you were preaching me a sermon! For several years after I began quilting, I never started a new project of any size until the current one was finished, complete with binding and label! Now I'm wondering, would it be better to get all my stash pieced into flimsys so when I die, (like that were possible --- ha-ha!), all anyone would have to do is get them quilted, or would it be better to have fewer finished quilts, and tons of fabric left so whoever could make whatever she chooses? What a dilemma! Even today, while piecing on my stars, I've been thinking about what I want to try "piecing" next! But I did promise myself not to start on it, until I get the stars together! Like me, just don't worry too much about housework! (Sorry this is so long, but.....) ---"Love"

I always wonder how I had time to work with all the things I find to do now! There is always something popping up. It will take a little time to find your groove but it will come. You have a good idea though, finish some then reward yourself with some new projects. It just takes a little work. I love the doll quilts, so cute! As long as you are making progress, it's all good!

You certainly are moving things forward and some progress is better than none at all. That ice storm is rather spectacular. We’ve been ***enjoying*** an extended summer so hopefully cooler weather is just around the corner.