I have a few projects to share, but first let's start with the important one.

Somewhere in the middle of 2015 the Vintage Farm Girl quilt started popping up all over Pinterest.  I was in love from day one.  I went looking to find out what this pattern was and found out that not only was the book just coming out, but there was a quilt-along on the designer's blog, too!

Quick get some white for background fabric.  A big piece of it so it all matches without hassle.

Lori Holt, the designer, had us make two blocks a week.  We went through the book in order, which to my OCD brain, worked rather nicely.

I more or less kept up and posted on Instagram.  Not so much with the blog...there were a few posts in September with lots of blocks...

I chose to make the 6" blocks because I'm crazy.  Well, okay, I didn't know it was crazy until after I started.  I just liked the idea, okay?  (I still like it, but I'm also still crazy.)

There were a lot of little pieces.  A lot of fussy piecing.  But with the exception of one block that I feel is too dark, I LOVE every single block.  (And my dislike is not of the block, but of my color choices.)  Yes, all of them.

Some are traditional blocks given a new farm-y name.  Some are blocks Lori designed herself.

The book is well-written.  The instructions are spot-on.  Lori provided a lot of side-projects with each weekly blog post and lots of beautiful photos of everything.

Most weeks, I enjoyed making the blocks.  Some weeks were harder for me than others (less a quilty problem, more due to personal garbage), but once I dragged myself into the sewing room, things usually got better.  (That's a lesson I keep having to remind myself of - true again this weekend, though there was less dragging and more needing-a-shower-ing...)

I got the top together at a retreat in January of 2016.  My mom was working on the same quilt, 6" blocks, and my friend Colette was also working on her quilt (12" blocks), too!  My mom was using more traditional 30's reproduction prints and quickly tired of the teensy pieces (which is funny because usually that's her thing!) and Colette was using a black background and slightly more traditional colors (versus my bright 30's-ish (heavy on the -ish) fabrics) so it really looked different.  Sadly I don't have photos of either of theirs, but I know for sure Colette's is done.  Not sure about my mom...

Finally I decided I didn't want a border and bought backing fabric - December 2016 - you know, only 11 months after the top was done.  It was a debate between the orange I used in the pumpkin and a teal-blue.  Both had been purchased as fat quarters at the local quilt shop and both were in the sale room by the time I decided to buy backing.  Bonus. 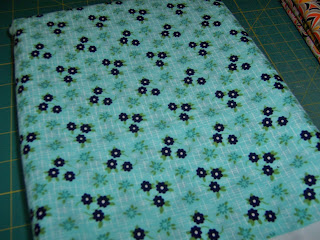 Blue won.  While I loved the orange, this one just seemed more appropriate.

I think I purchased the fabric before I knew about the UFO challenge, but maybe not...it's dated December 26th (the photo)...

So it was first to go on my UFO list.  I love this quilt and I wanted it finished.  I kinda dreaded putting it on there, but I kinda dreaded putting ANY of them on there.  But it's getting easier each month to get the quilts done.  Well, last month was a struggle, but less for using the longarm and more for deciding what to quilt.  Usually it's both.

April 1st the Vintage Farm Girl UFO number was called.  April 9th, a Sunday, I quilted it.  It's not very big (43x55" maybe?), and I decided to do an overall pattern because I'm not good enough (yet) to fussy quilt 6" blocks that are all different.  And really I wanted you to see the blocks, not focus on the quilting.  (Though Colette did fussy quilt all her blocks (her 12" blocks, thankyouverymuch) and I love what she did, so it made me second guess my choice, but I'm NOT ripping anything out!  And though she's had her longarm less time than I've had mine, she's quilted a TON more quilts than I have in that time, so she's a lot better with the fussy stuff - part of the joy of being retired, I guess?)

Anyways, it took me until this past Wednesday, the 26th, to finish sewing down the binding (why do I procrastinate such an easy step?) and call it done. 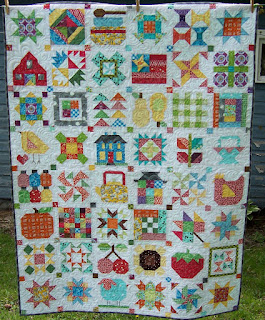 The photo looks a little dark, despite being taken outdoors in daylight, but I love it.

Wanna see some of my favoritest blocks? 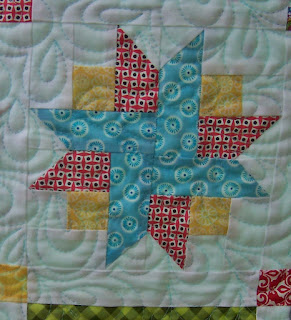 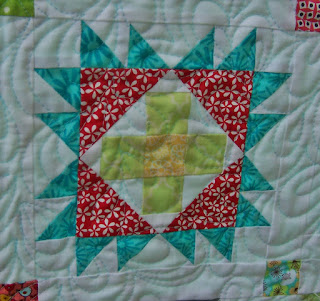 You can see the quilting better here, though I feel like that turquoise thread looks like it's bleeding in the photos.  And the white is not a true white either, though it is in real life.  Since when can't you take good photos outdoors in broad daylight?  (Maybe it's time to replace my camera?  It is about 15 years old...)

At our guild meeting Thursday before last, we exchanged boxes again.  This month I'm making 12" churn dash blocks.  Her only request, aside from size, is no solids.  She only wanted one block each, but there are 8 or 9 blocks in the box after just two people (other than the owner) have had it.  So I guess we're over-achieving.  And I had to giggle because some of the blocks took the "no solids" to a whole new level.

I chose some funky fabric combinations earlier in the week, making sure none of my fabrics read too much as solids, and woke up this morning inspired to get them done.  I've had a busy, rough week at work and really needed something that I enjoy and sewing a rather simple block fit the bill.  I didn't even bother to shower before heading into the sewing room - I made three blocks and then decided that it probably wasn't appropriate to wear penguin-adorned pajamas all day and went to remedy that situation.

While showering, inspiration struck.  (Seriously, all my best, craziest ideas happen in the shower.  Maybe I should just move my sewing room into there?  It's a fairly large room - do you think the hubby would notice?  Or mind?)  I had pulled out a bright yellow fabric to inspire me for my May dolly quilt.  Thinking seeing it on my cutting table for a few days would help me decide what to do.  I'd already perused Pinterest and found something I liked, but that shower. 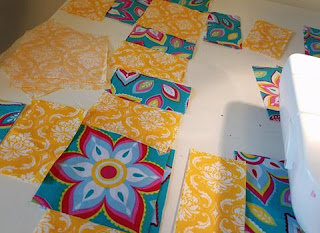 I should have taken a photo sooner, but this funky floral (we'll call it turquoise because the background is) started screaming that it needed to be paired with that yellow and in churn dash blocks.  Four of them, two in each way of assembly, no sashing, for a dolly quilt.

Well, who am I to argue?

The hubby dragged me out for lunch (oh the horror!) and when I got back, I had had time to do some math and figure out how large I wanted these blocks to be to get a reasonably-sized dolly quilt.  (A 9" block should do nicely and be easy on the math.)

A short while ago I took this photo: 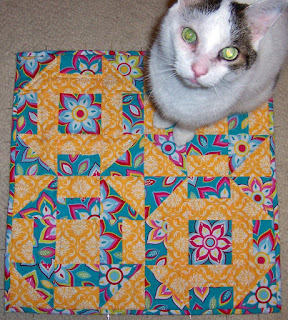 Emma is very angry with me.  I am not feeding her.  I had been not feeding her for about an hour at this point (let me assure you, she is NOT starving to death, though you might think so from the effort she puts into getting fed every few hours), so she was rather annoyed that I was taking photos of THINGS and not FEEDING her right NOW!

A few other fun shots from my day...

The messy cutting table before I started (I'm not very good at putting my stuff away)...

And a photo after cleaning up and sewing the churn dash blocks...

You see those cat toys on the box?  Those were made from some small-ish scraps.

I also had another helper.  Emma likes to be between me and the sewing machine.  Luka decided he needed to be on the cutting table.  Like every 2 seconds. 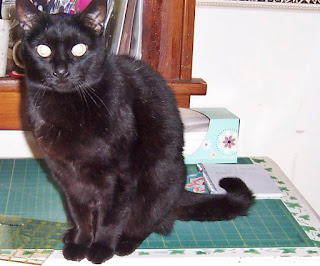 Emma was also not helping with the block assembly... 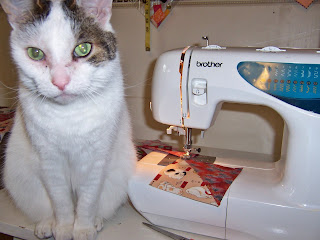 ("hi mom. i see you are sewing some fabric with cats on it. those cats do not have any actual fur on them. here i will help")

But when it was all said and done, these two "helpers" got the toys.  (The other two cats minded their own business and are generally not pests.  But that is not why they didn't get toys.  I just didn't have any other appropriately-sized scraps.) 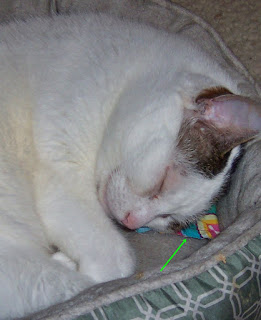 See the cat toy under her head?  (there's a green arrow pointing to it)  She's all tired out from playing with it.  Photos like this make her look so sweet.  She's a stinker and a pest.  But she's also a good snuggler when she's not STARVING to death.

The hand-sewing side of the bonus April dolly quilt quilt needs to be done yet, so I think it's off to watch some Netflix and get that done.  Monday brings a new UFO number and a new scrap challenge color, so I'd better be ready!

You are just motoring through the UFO list. I think the no-borders choice works really well with the fabrics you used for your Farm girl Vintage quilt. It also seems you're doing a great job with your longarm! Love your helpful kitties :) I have a canine supervisor, myself, so I don't have to deal with the pet on the table. Chairs yes, but so far no tables.

Your decision to quilt an all over design on Vintage Farm girl was the right one for six inch blocks. In a quilt like that you want the blocks to be the stars. It's a fantastic quilt and I love the colours in it. Funny kitty kats *helping* with your sewing. The churn dash blocks are terrific - love the play of colour and pattern.

Can't wait to see in person what all that hard work produced; I've been 'fighting' with Mo'e over tension issues... I'm using So-Fine for the first time in awhile and I don't think he liked it. Finally got it set right, I HOPE... after having to unsew several sections.

First thing, let me agree with you; you definitely are crazy to make that many different 6" blocks! Ask me how I know! By the time I finish 40 Moda Block Heads 6" blocks, I'll be certified as crazy too, if not already! Your quilt is really cute and well done; hope mine will be that nice. I love the fussy cut centers in your churn dash blocks! That's going to be a pretty quilt! --- "Love"

You are so productive with your UFO list and I love your quilt, it sings to me :)
Karen

I love all the blocks in your Farm Girl Vintage quilt, too. Great colours. And, who could ignore such sweet kitties!

Congratulations on your April finish! The quilt looks terrific!

Love your Farm Girl 6" blocks - and your Churn Dash dolly quilt - and your fur babies. If you think you're crazy for making 48 6" blocks, I must be "certified" insane for making 99 6" blocks for my sampler quilt - especially since I am seriously considering doing it again - ;))

Those kitties -LOL. Love you quilt. Congrats on the finish. I almost got there.

Your Vintage Farm Girl quilt is to DIE FOR! I would love to have one! Congratulations on a great finish even if it was last minute!