After finishing my 13 purple cats last weekend, I had a pile of purple strips that were annoying me...

...these leftover strips, at 1.5", were too skinny for me to really use, but I felt bad throwing them out...

They were left over from this quilt - the photo is dated 2006, so I'd guess that's about when I gave it away, but it could have been earlier... 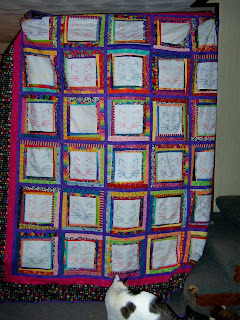 This quilt was made for a little girl who was like a niece (she was actually my sister-in-law's niece, but events since then have, sadly, distanced us from her) for Christmas.  She was about 3 when she got it.  I started with the intention of making a twin-sized quilt, but my math was wrong and it ended up closer to queen-size!  It's all good - bigger is better when it comes to quilts, right?

I embroidered the cat faces and then used bright, fun scraps to frame the faces into a log cabin-like setting.  My first try at wonky, but not too wonky as the blocks could only be so large.

This was well before my longarm and I didn't want to spend a lot of money (and didn't really have the extra time - nothing like beating a deadline by minutes here...a theme that will repeat below...), so I decided to tie it.  I clearly remember setting up three large tables in a church basement, where a quilt group I was a member of met once a month on a Saturday, and climbing ON the tables to tie the center.  I'm not too heavy (and was even skinnier then), but was a little concerned at first.  But the tables held and there are probably photos roaming around somewhere of me crawling around on those tables...  We all had some good giggles at the whole process, but it worked!

I gave the quilt at Christmas and got a phone call the next morning - how do I wash the quilt?  Apparently with all the excitement and candy involved with the holiday, Chloe overdid it and saw some of those sweets again...the hard way...  No worries - throw it in the wash, use cold water, and don't worry.  I knew it would get washed, just not so soon!

So, back to the scraps...an idea had started in my head for a dolly quilt.  I wanted a white or light background and went looking in my stash.  I found some 3" strips leftover from another project - perfect! 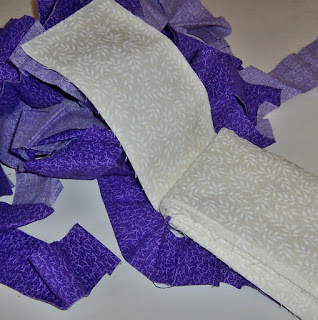 The purple strips were 12.5", so I cut 12.5" strips of the white and sewed two sets of alternating colors with six white and six purple.  I trimmed 3/4" off the end white strip and then sub-cut the strips crosswise at 1.5" strips, flipped half and sewed them back together.

No points to match and it seems the purple squares are floating!  Easy peasy! 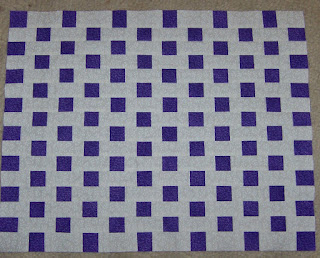 I got this far and realized I had enough of everything to make a second...  Do I want to make a second?  The wheels started turning again and I began thinking of two of my nieces, both four, who love dolls, but I've never made any of the nieces a doll quilt.  Maybe I should make a second and give them to these girls?

I asked the hubby and he said it was a great idea, so off to make a second.

I am proud to say I have no more 1.5" purple strips measuring 12.5".  (I have a few skinnier ones and a few shorter ones, but the pile is greatly reduced and the remainder can go into my string quilt pile...that grows way faster than it should because string quilts are really not my thing.)

I dug through my stash, debating on using a purple for the back (I have some larger pieces, but wasn't sold on any of them).  I debated making the backs different so the girls could tell which was which.  Then I found a piece of lime green with large (dime-sized) white dots.  PERFECT!

The quilt told me how to quilt it - just a stair-step kind of zig-zag that did require marking the quilt, but went fairly fast.  But I don't recommend using the blue water-erasable marker and quilting with lime green thread.  It's hard to see where the marker needs a second shot of water!

And then I found some perfectly matched lime green with tiny dots for binding!

I finished them this morning - good thing because the hubby is headed out to pick up the girls to go bowling this afternoon in a few minutes!  (See - last minute finish again!)  They're identical (the quilts, not the girls), so I hope it doesn't cause any fuss, but I could see an equal fuss over who gets which one initially, too.  It's a lose-lose for this tiny part, but inevitable - these girls are more like siblings than cousins! 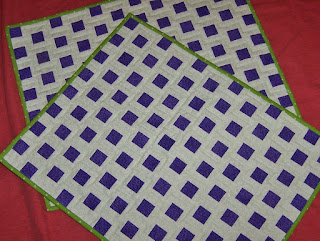 (And I hope next month's color doesn't turn up another pile of frustrating scraps that end up with this great idea...)

(Getting that quilt photo took some effort and fighting with my computer - there's a song about that - the computer problems, but there you have the whole story of the scraps!  And a bonus is that I went looking for and linked to the song while trying to find the photo and thinking I'd be unsuccessful!)

What a tale!! Alas, no more PURPLE strings AND a duo of Doll Quilts. Here's hoping the girls really like their new quilts!! (What's not to love?!)

The quilts are really cute! What a great idea to not have to match points, that made it so easy. The girls will love them, too. Have fun with next months color!

It started as a frustrating pile of scraps, but look what a cute pair of quilts it turned into. Adorable!

Those are really cute doll quilts, the girls are going to love them. A full size quilt in that pattern would be fantastic! villacrestfarm@gmail.com

Great idea for how you made those cute doll quilts! They are precious, and I'm sure the little girls will love them. ---"Love"

Your dolly quilts will be a huge hit I'm sure and now those pesky scraps have been used. Win-win. I'm excited about next month's RSC colour.

A great story with a wonderful finish. Hope the girls enjoy their dolly quilts.

Darling doll quilts. They look almost weaved! I'm sure the girls are going to get a lot of use from those for their baby dolls!

What a great way to use up those scraps! Those little quilts are adorable!

Oh, my! What a lovely way to float those squares-this looks fantastic and I am sure the doll quilts will be much loved! (I still have my first one from a woman I called Grandma-it is now an antique! lol)