This week, the challenge was the traditional block Birds in the Air.

Not a particularly inspiring block for me, but that's okay, it's all part of the challenge!

I surfed the 'net looking for something inspiring and came up with almost nothing.  Apparently the block isn't all that inspiring to artsy quilters either!

I did find a very good video tutorial from none other than Eleanor Burns on how to make these buggers - eight at a time!  So, I watched and scribbled some notes, rewinding in places to make sure I had all the instructions down correctly, and moved on to my stash.  (But I want you all to know that when my mom first started quilting, Eleanor Burns was just hitting it big with her Quilt in a Day series and was on local television once a week.  My mom would either watch it then or record it with the VCR (I think one of us kids programmed it for her) and watch it later.  And I HATED her.  (Well, her voice.)  She is a wonderful quilter and has a lot of good ideas and her books are fantastic, but that voice!  I called her Mrs. AnnoyingLady for years.  I never even bothered to remember her name, I found her voice so annoying.  So it was with trepidation that I embarked on the 26 minute video to learn how to make these blocks.  I knew she would teach me well, but I also knew...that voice...  I made it, but wonder if she speaks like that in normal conversation?!)

I decided to just dig in and make some blocks and see where it took me.  Worst case, I have some blocks that will make a baby quilt - or something larger.  I pulled some fabrics that coordinated and started cutting.  And sewing.

No photos were taken until I got halfway done with the blocks! 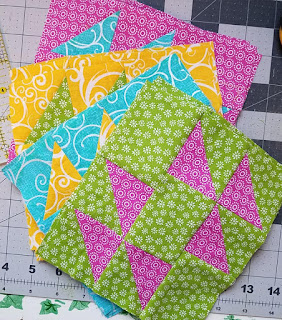 But, oh, did I not enjoy making all the half square triangles!  96 of them here in this stack.  But I broke things up and did one set at a time, so only 24 were trimmed before I went to sew a bit again.

I even resorted to writing a haiku about those stupid half square triangles.

This is a new idea for me, these rectangles that get chopped in half, but it's been around a while.  Just something I never tried to wrap my head around before.  But for this block, it seemed efficient and eliminated having to work with a lot of bias edges.  And worked very well. 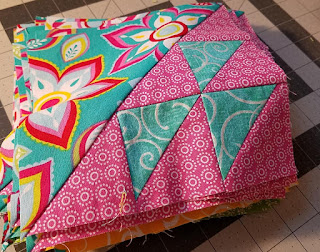 Funky fabric for the large piece!  This was left from a quilt back and kinda one of those "what do I do with it now" pieces!  Works here!

Then I had this idea for a layout. 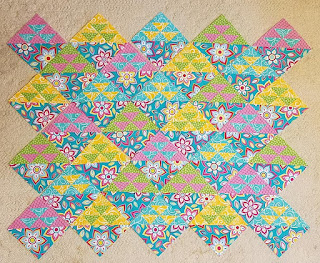 In my mind this was longer than it was wide.

Will it work to just turn it on its side? 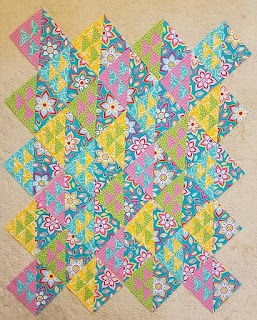 Thankfully this only took walking around to the other side of the blocks, but oh no.  Ugh.  This is not right.

NOW I have to flip them ALL 90 degrees. 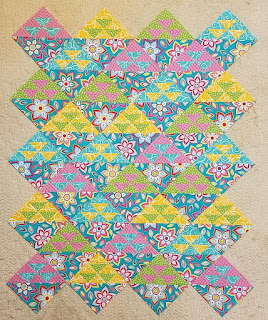 Setting triangles, I'm coming for you! 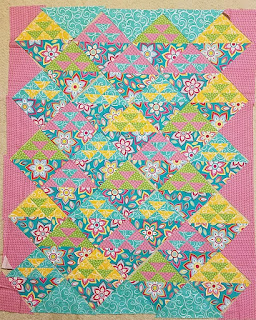 But oh man, what a trial.  I didn't have any more green, not enough yellow, but pink.  Pink looks like there's a chunk.  Pink will work.

NO.  There is not enough pink.

(Glad I found this out AFTER I cut most of them...)

Okay blue.  I have some skinny strips of the blue (also left over from a quilt back), I'll use that.

BARELY enough blue.  But I made it.

Quick!  Label rows and pick it up before a cat-tornado comes through and rearranges things!

I ended up laying them back out two days later when I was ready to sew things together, but I was in the room and could monitor tornadic activity.  (I heard my weatherman use that word, so despite my spellcheck telling me it is not a real word, I'm sure it is.  Weathermen never lie.) 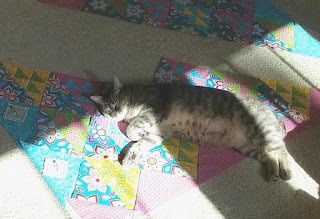 With all that sunshine, one would not expect any cyclic air events, but you might need to know that "sleeping" kitten there is quite the terror.  She was just pretending to sleep.  So I would try to pet her.  So she could try to chew my arm off.  (She claims it is "playing"...right...)

After some tedious long seams, this was a top.

Time to make some binding.  I had a good amount of the blue that was used for setting triangles left over as binding from the turquoise and white quilt I still have not sewn the binding down by hand yet, so I cut a few more shorter strips (nearly decimating that blue - thank goodness!  It's got metallic silver printing and that sticks to my iron and makes a horrid mess...note to self: no more metallic!) and added to it and had that done.

Oh, I have some comma-birds that are pink and turquoise and yellow on a darker pink background!  Left over from another quilt back.  That will work.

Oh, look, some owls (also left from a quilt back)!  Just long enough to add to the other birds and make a wider-than-needed, but adequate backing! 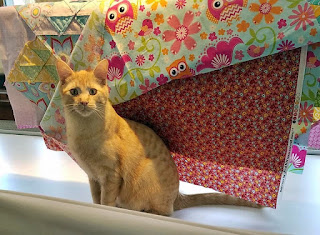 I forget to take photos, but after I draped it over the longarm, while it waited for me to oil and clean and prep the machine, Finn hopped up and posed for you.  So you can kinda see the little birds and definitely see the owls.  (And there are comma-birds in with the owls, too!)

And then it was on the longarm!  The much-dreaded step of prepping (which takes forever and if I had a quilt fairy, I would forgo the dreaded long seams just to have someone set up my quilts for me so I could push start and away I would go!) was finally done and I was ready to quilt.  I expected with swirls (my lazy go-to again), it would take less time to quilt than it did to prep. 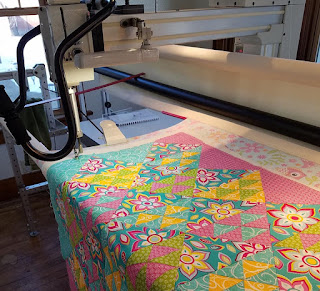 About 45 minutes later, it was quilted.  And I took a few short breaks.  You know how your phone is dead silent all day while you're procrastinating doing things you should be doing and you just wish someone would start texting you and give you an excuse to not do that thing and then as soon as you decide to do that thing, your phone blows up with three people simultaneously sending you texts?  Yeah.  That happened.  Again.

But it did go fast and my tension was spectacular until the very last swirl where I was just about out of bobbin and it does that to me.  Not bad enough to rip out, but enough to annoy me.

Being a good girl, I hauled myself right back upstairs to the sewing room and sewed down the binding.  The machine-sewn side at least.  And decided to take a break at that point (yesterday evening) because it was getting dark and no matter how many lights I turn on, it seems I'm always in my own shadow when binding.  And then I end up in all sorts of oddly contorted positions and my arm starts to throb and my leg goes to sleep and...well...any excuse is a good one, right?

Anyways, today, after seeing the hubby off to (second shift) work, I pulled up my Gilmore Girls on Netflix and started binding! 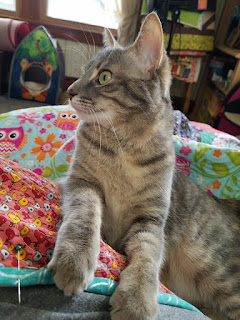 And Gabby, who does not do laps (except if you're my hubby and on the toilet - so he claims!), decided, once again, that binding a quilt is THE time to snuggle.  She is giving you her profile shot here so you can admire her beautiful tabby stripes.  (And you can get a better look at the back here, too, if you can tear your eyes away from the kitty!)

Finn, on the other hand, after exploring and being told "no, you cannot eat the pins" decided his newest, favoritest (other than the plastic springs maybe) toy, the Ripple Rug, could be demonstrated instead.  (And I am not kidding when I say this was the best money I've spent on a cat toy.  The plastic springs are great, but this thing...they wouldn't even let me get it out of the package before they were diving into it!) 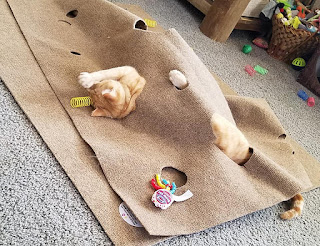 You might think, on inspection, that there is more than one cat in there.  But no, it's just Finn.  (And you can see many spring toys laying around too, as I just went on a hunt-and-gather mission under furniture to reclaim about 8 of them!)  Soon after, Freddie came over and they had a whap-fight through the holes, but Freddie declined to be photographed and made himself blurry for every attempt.  He has also recently entered his "teenager" phase where if you pet him, he licks that spot clean of any human smells.  He will not snuggle unless it is his idea, but you'd better not like it.  And you must bring his food to him, he will not lower himself to be lured into the kitchen and eat with the other two cats.  (Can you hear me rolling my eyes?)

Finally, the quilt was finished.  Three Gilmore Girl episodes (and I found Sheldon's dad, from Young Sheldon, in an episode! with no sourthern accent...it was so odd...and he was quite a bit younger!) later and I was ready for a photo shoot.

Mother nature has cooperated today with sunshine and little wind, but is torturing us with temps in the 20s.  Fahrenheit, for any of you out there thinking Celsius and wondering why I'm complaining.  But the sunshine has me happy, so I'm going to focus on that. 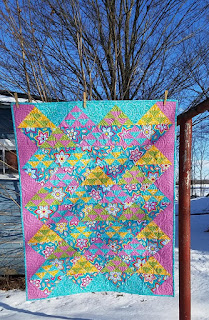 Anyways, here is my submission.

It measures about 35x44.
It will be a good baby quilt.

It looks like a scrambled Easter egg, but it is what it is.  And some stash reduction happened, too, so all is good.

And since I can find photos of all but one quilt that these leftovers came from, let's have a collage, shall we? 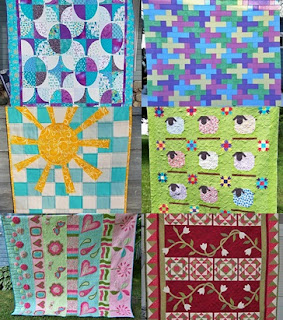 The only one I'm missing is the owls on the back and I've gone looking for photos of the quilts I thought I used it on and so far three were wrong and the fourth I have no evidence of having made.  (Too long ago!)  Oh well, I'm sure it was a quilt back somewhere...

And with that, it is dinner time.  Time to scrounge up something that sounds better than the leftovers I've been working on for days...

We had Sandy Turner come to our guild last summer. She does a lot of quilts with the birds in the air block. These blocks let her accent large prints. It makes the blocks look like an “on point” setting with side by side straight setting. Take a look at some of her stuff.

Hi Katie, I absolutely love the colours in your quilt. It's so cheerful - it'll be perfect for a baby quilt! Your cats sound like they are good (or not) companions - at least entertaining :-)

Thanks for the link to Eleanor's tutorial! Your post was highly entertaining. That challenge quilt is SEW adorable! Some baby will be happy that you took the time to use up some of your (quilting) leftovers.

Loved your post.....and creation. Now off to look at ripple rugs!

Working on a project as part of a team makes it that much harder! I love the low contrast with your birds in the air...the birds pop out, but softly. And wow, I think Finn just sold me on that contortionist hole cat toy...I think Molly would love it.

I love the colors in your quilt, it is so bright and cheerful! Your cats are adorable as always. That looks like a great cat toy!