In the next few days following the last post, I loaded the Christmas squirrel on the longarm... 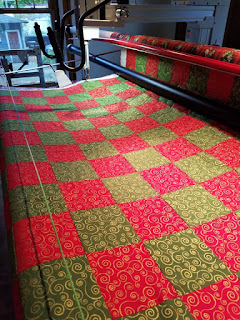 ...and quilted it in just a few hours.  I did an overall meander with holly leaves, free motion.  Originally I had thought to do swirls, my go-to, but with the fabric being all swirly to start with, I felt that might be overkill.  And both my hubby and a quilty friend suggested the holly.  The back is plaid with holly bunches, so it made sense.

And I sewed the binding down by machine and dug right into the hand-sewing portion.  I got about halfway around before my guild meeting that Thursday... 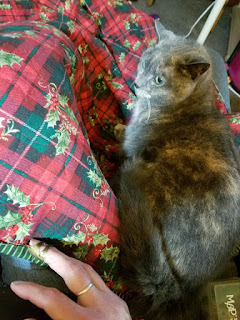 ...but not without help from Lexie.  She may be deaf, but she still knows what a good snuggle looks like!

Friday and Saturday I worked.  Saturday I headed in to work with a dry, scratchy throat, but thought little of it.  The furnace has been running a lot and I chalked it up to that.  By 10am, I knew it was NOT dry air.  I had a fever and chills and was alternating between freezing and sweating just standing at a cash register.  But the boss-lady at work did a poor job of scheduling, plus the closer cashier called in sick, and I was stuck there the whole shift - despite my hopes to leave even a few hours early.

The next week was spent mostly sick and in bed.  I went through more fever and chills, nausea and vomiting, stuffy nose, headache, body and bone aches, coughing and no appetite.  The boss-lady is Patient Zero at work - she came in sick and coughed all over everything.  Yes, I say she coughed on everything because she did.  (And I'm still angry about it.)

(Please folks, if you are sick, STAY HOME.  Not all of us have a robust immune system.  Not all of us can down just any cold medicine we want to feel better.  Not all of us can afford to stay home and not get paid.  If you come in sick, you put EVERY. SINGLE. COWORKER. at risk.  And end up with  more work on your plate as your coworkers call in sick.  Never mind the families of coworkers and, if you work with the public, every single person you come into contact with.  I may or may not fit into all of those categories, but I'm angry enough to get up on my soapbox here on my mostly-quilty blog.  And now I'll get down.  But I'm still angry that I'm STILL sick.)

I finally regained my appetite the following weekend, though it's still spotty.  I still, 11 days later have a hacking cough and a stuffy nose.  But I feel like a person again.  And am not so bad I have to call in sick to work.  So I'm celebrating that!  Today, when I'm done with this blog post, I'm gonna go make tiny stars...if the hubby is home or not!  We're doing leftovers for dinner, and I did chores earlier, so it's my afternoon!!!

When symptoms finally subsided enough to think, I got back to the quilt binding.  I wanted to turn it in at the meeting this past Thursday, and didn't have THAT far to go... 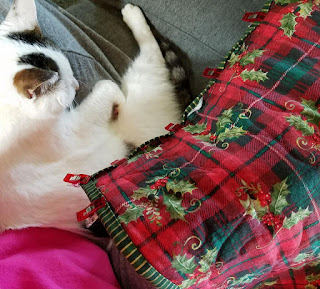 ...Emma helped with round two.  And I tried to be very aware of not touching my nose or face while doing this.  (Or getting up to wash my hands if I had to!)  I ran it through the dryer for quite a stretch after to get any stray cat hairs off and hopefully kill off any germs before I donated it.

But Thursday evening rolled around and I was tired.  So I decided, also because the cough was getting worse instead of better, to just drop the quilt off at the meeting and head out again.  There are many older ladies in my guild and NONE of them need what I had.  If I was that miserable, I can't imagine someone nearly twice my age having it!

First, though I had to get photos.  It was rainy and cold and getting dark, so I asked the hubby to help and our messy back room has the best lighting for this sort of thing.  He's a smart-aleck... 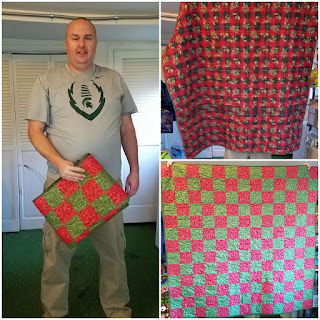 ...first he held the quilt out, folded, at arms length.  I missed that shot.  Then he held it up backwards, acting like he couldn't tell the front from the back.  He's a goof and I think was just glad I was feeling well enough to get up from my bed to do anything.  (He'd been going out every night and getting us food from the local fast food places - getting me a kids meal that I barely touched - just to help in one of the few ways he truly could!)  (And I thought about blurring out his face, but he so rarely smiles in photos - he prefers the "mug shot" grimace - I just left him there.  He's much better looking when he smiles!)

Anyways, I dropped off the quilt and felt some relief that this one is done.  One more deadline met!

But I still have the Rack of Shame... 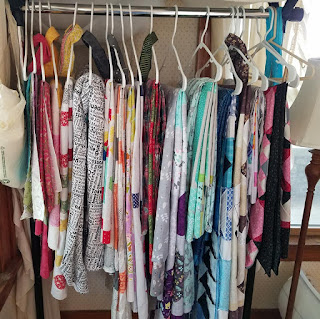 ...these are mostly tops I've completed in the past year.  Many of them have backs and even bindings ready to go.  This is my to-do list for the cooler weather.  (Now I just need batting to go on sale!)  Maybe I'll load one tomorrow?  (But which one!?)

In the middle of all this illness, our little kitten (who is a 9.2 pound cat now, at just over a year old) had gotten her tail smooshed and was worrying it excessively.  We tried some painkiller/anti-inflammatory meds earlier, but they weren't working any more.  So she went to the vet this past Monday.  They shaved the end-half of her tail and x-rayed to assess the damage, as she'd been chasing, catching and crying/growling at it for weeks, and it was awful.  Bloody slashes and cuts all over, but not broken.  The vet offered two options: 1. attempt to bandage and antibiotics or 2. amputation.  Since she is still fairly wild and decides when she is going to be a housecat (instead of a beast running rampant through a house), I figured the first option would not go well.  So we went with more drastic option 2. 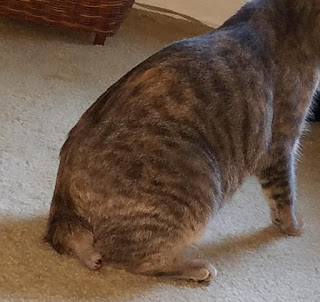 I know it's kinda gross, but they took most of her tail.  I know they took what needed to go and it's okay.  She's young and resilient and will bounce back.  But last night was rough.  We confined her to my bedroom because she was still quite loopy from the anesthesia and were warned against stairs.  The bedroom has cat beds, a people bed, a couch, a window seat and a litterbox.  All I needed to add was water and a little food and it was perfect.  Plus, all night there was a human momma to snuggle, if she chose.  She struggled with how to set the tail down and not have it hurt and I heard her pacing a lot of the night, but finally, at some point, she figured it out and I woke to find her sleeping on my legs, peacefully.  Eventually she moved to one of the cat beds and was crashed out when I woke up this morning.  But the anesthesia has worn off and she's no longer wobbly.  Still adjusting to the pains of setting it down wrong and the lack of claws (they trimmed them up aggressively, but she was not declawed), but she came home with pain meds and has her human momma home with her for a few more days, too, to help her remember to not pick at it.  She's sleeping peacefully in one of her favorite spots - about 5 feet up on a platform in the cat tree.

I did sew a little Monday night - something to keep my mind busy instead of feeling guilty at making a drastic decision for my cat and then leaving her with the vet... 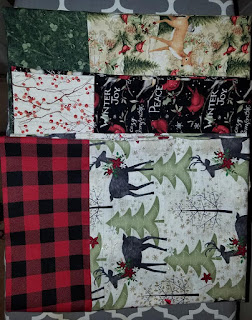 ...three Christmas pillowcases for the three nieces on my side of the family.  This has become a yearly tradition - sometimes they wrap the gift, sometimes they're just folded neatly and given.  I know they already each have a few from past years, but things wear out and sometimes it's nice to just have something new like this.  They went quite fast, even with me messing up how to do French seams and having to unsew a bit.  (It seems this year I've been doing a fair amount of unsewing...)

So that's why I've been gone.  And where I've been.

I hope you all are well and quilting away.  I look forward to feeling truly myself (I think I should buy stock in the companies that make tissues with as many as I've been through lately!) and getting back into the swing of quilty things.

And with that...off I go to make some tiny stars!

You said you had reasons - and you certainly did! Poor cat - maybe that's why her human momma got sick - so you could stay home with her and not get yelled at by boss lady - who made you sick in the first place. Sorry you were/are sick - boss lady should have stayed home - we can only hope that she does next time. Your Christmas quilt came out nice - I like the backing that you chose and your husband "holder" is funny. Glad you finally feel well enough to get back to your tiny stars - and your "Rack of Shame" - love that name! - I've got one just like it - LOL - ;))

YAY!! Welcome back to the land of the living. Poor Gabby... she'll be fine - eventually... she's young and resilient - she can be an indoor bobcat :).

Sounds like you've had a couple of weeks much like mine, except instead of me taking care of a cat, my neighbors and son have been taking care of me! Your Christmas quilt is really pretty! Looking forward to seeing your little stars! Hope you feel much better soon! ---"Love"

Oh, gosh! You really have had a time of it lately. The backing fabric is so pretty, too, on the Christmas quilt. Somebody will be so happy to get that. Your poor kitty - how did she smoosh her tail?

You certainly have had a serious dose of the lurgy. You poor poppet. I’m glad you are feeling better. Hubby is a handsome chap and sweet of him to do his best to care for you. You did the best thing for your kitty. She’ll be back to full manic in no time. Holly quilting on the quilt was a great idea. My collection of quilt tops is threatening yours. Although I don’t have backings and need to send mine out for quilting.

Your Christmas squirrel turned out well before you got sick. Sounds like you have been through the wringer the past few weeks. Thanks for spreading the word about staying home when sick! It was good of you to decline to pass the bug on to your quilt guild :) Poor kitty :(