Who would have thought that the UFO for the month, a paper pieced project I'd been procrastinating for a couple of years, would trump the rainbow scrap challenge for what to start first?  Certainly not me!

But I'm still struggling with my project choice for the rainbow scrap challenge, and I knew it would create a big mess in my sewing space for quite a while when I started, so I decided to go for the UFO first.

This month it was, as previously mentioned, another block from the Arcadia Avenue quilt.  It was pretty much how I spent all of last weekend.  But it put my new machine to the paper piecing test (passed with flying colors) and gave me this... 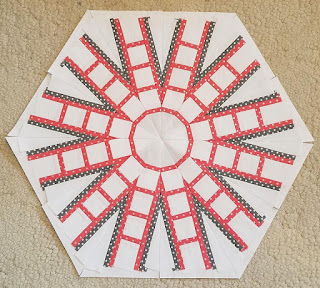 This block is called "filmstrip" and though it's not as obvious in this colorway, you can definitely see how it earned the name!

Only three more blocks to go (out of 12)!  Then comes the task of squaring up the blocks (hexagoning?) and putting them together.  That's not actually on my list for a number, though it probably should be...

While sewing, I decided to try "watching" something on Netflix.  Usually I like to focus on what I watch when I decide to watch television, so I knew I'd have to choose something I didn't have to really pay attention to and decided to watch "The Office."  I'd only seen bits and pieces of a few episodes and wasn't sure about it.  Recently I'd seen a compilation on YouTube of funny bits and decided I'd give it a try.  While so much of the nonsense is far beyond what would truly be tolerated in an actual workplace (I hope!), I am finding myself laughing and it makes tedious tasks like paper piecing a block of 180 pieces a little more enjoyable!

But with this block complete, I had to pull out my greens.  Much like my blues, they are getting out of control.  I am pondering a squirrel project for the greens, but nothing has slapped me in the face in quite the way the blue squirrel did.  (Though there is a project brewing...the origins of which did slap me, but it's the figuring out how to make it work with what I have part that's troubling.)

So during the week I managed to make a few blocks.  I thought this would lighten the weekend load... 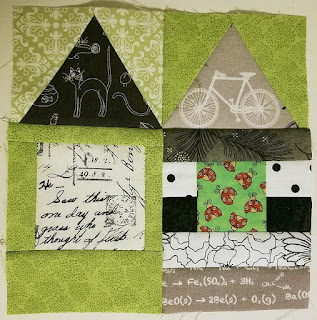 This one is square.  Once again I can't take squared-up photos with my phone camera.  The colors are also a little off, due to late-night photography sessions.  But even with templates, it came out okay.  No worse than any others. 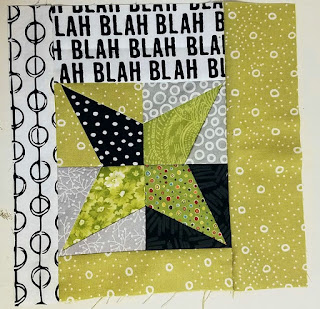 Again, colors off and failure to take square photo, but done.  I decided to try paper piecing those center parts instead of templates.  My results?  I think they might be worse than if I'd used templates!  But I'm at the point with this quilt that done is better than perfect.

I also made tiny stars as leader-enders, so lets see the whole stash of green stuff so far... 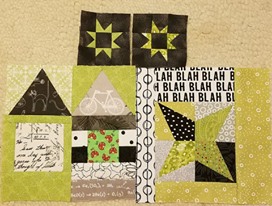 Hoping for better photos today, as I'll be sewing in the daylight.  At least I should be if I get my behind in gear here soon!

First are a few chores, including helping a quilting neighbor get the machine part of her longarm loaded into her car so it can go visit the doctor.  I have a strong, willing hubby, so she's borrowing him to help.  Neither of us mind the trouble and hope that when we're older and unable to do such tasks for ourselves that we have kind neighbors and friends that will help us in return.  (But we also hope those days are a LONG way off!)

To the sewing room...via shower and laundry folding...

Happy quilting,
Katie
Posted by Katie at 8:11 AM

I think the center of your star block looks perfect. Lots of lovely greens while you wait for that squirrel to pop up.

.... and your quilting neighbor ( a mile away lol) really appreciates you and your husband's willingness to help us 'old' folks out.

Love your analogy of the squirrel project that slaps you in the face! Don't worry about straight on photos with your phone camera. Take them deliberately at an angle and quit worrying!

Hmmmm---in your paper pieced block, I saw firemen's ladders, not film strips. Of course, I worked at the fire dept., so you would know why I saw ladders. Anyway, it is a very interesting block. I look forward to seeing more of what you do with it. ---"Love"

Great blocks, all of them are beautiful! Love the bicycle ;)

That's quite a nice stash of GREEN sewing!!

Oh, those squirrels! They are tricksy little folk!
It looks like you've had fun with the other blocks while you're waiting!

Love your blocks - especially the "bicycle" in the "attic" - very clever fussy cut!! Tell us more about the squirrel that you are trying to figure out to make work with what you have - ;))

LOVE that Spotlight block. Those olives and blacks are fabulous together.

Nice blocks and projects, I really like the Spotlight block, not sure what the colours should really look like, but I do like what I see.

Your blocks are great!

That film strip block is terrific! SO clever. These green RSC blocks are some of my favourites so far.

The Filmstrip block is wonderful! I might want to make one myself. Is it paper pieced? That is how I would do it.


I am visiting from http://dreamworthyquilts.blogspot.com and am currently logged into a different Google account which would make me hard to find.

And I thought the film strip block was a Christmas tree skirt. Of course, it probably isn't big enough, but I couldn't really tell what size it was from the picture!

The Arcadia Avenue block is amazing, it looks so complicated! You will have that quilt finished in no time! The green blocks are so interesting and I love the little stars! Have fun!