Since I've finished my "assignments" for the month, I don't have anything specific to report, but I have been sewing!

First, on Monday I finally got it together and mailed off the two quilts I made plus a few my mom made for the Share the Love quilt donations for A Doll Like Me.  You've seen one of the quilts in finished form, but I'm just going to share both again.  I love them both so much! 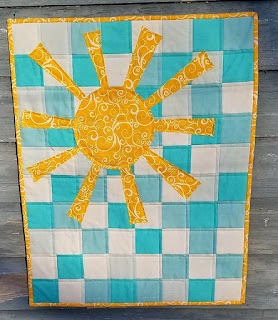 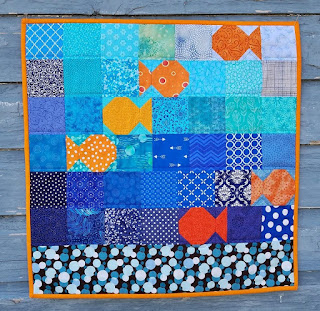 I didn't take photos of the quilts my mom sent.  We shared a box, and I did the sending, but photos?  Yeah.  Probably should have.  Oh well.  Far too late now!

But a strange thing happened with the shipping.  I contacted the gal running the project and she gave me the address of A Doll Like Me.  It was a PO Box.  No big deal.  I plugged that into the UPS website (I was shipping from work - using MY account thankyouverymuch - because we have a daily pickup and doing this on my lunch was far easier than any other option) and no error or warning messages came up.  Good to go.  Hit send!  Then I started wondering...it's a PO Box.  That's Post Office.  Will UPS just deliver to a post office?  So I googled.  Turns out they "can't" but will attempt to find an actual address.  So they did.  I got notifications the day it was delivered that they had found the problem (only took 2 days...) and resolved it!  But they found an actual street address.  Probably I could have googled the name of the gal I was given and gotten the same result, but I think there was a reason she had a PO Box!  I just hope she doesn't think I was being creepy.  I truly did NOT go looking for her personal info.  And I hope the box actually made it (UPS says it was left on the front porch).  How terrible would that be if it was delivered to a cranky old fart who just threw my (and my mom's) quilts away?!  But I can't worry about that now.

With these squirrels out of the way, I decided that last weekend I would quilt Philip's quilt.  I hadn't made a decision, but figured having it done would allow the decision to be made either way and not because of a lack of finishing.

It took a while and far more bobbin winding than I wanted (I just ordered 20 longarm bobbins...how is it that only 2 were empty?!), but I got it finished.  I went with an overall design, but I think it suits the quilt...well, a wedding quilt... 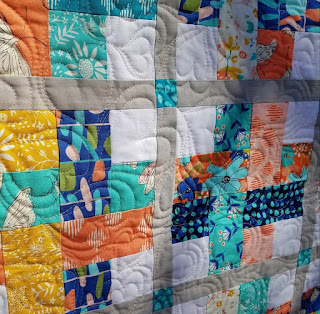 This photo shows the colors pretty well.  The next whole-quilt shot does not.  It's been beautiful and sunny here for about a week.  Still cold, but I'll take the sun and cooler temps over snow any day!

But that means tree shadows on my quilt photos.  At least it wasn't ridiculously windy... 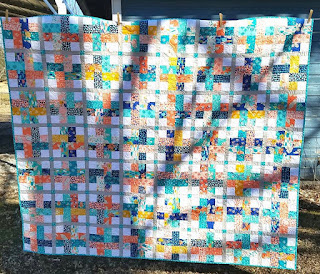 It's about 76x84 or something.  I don't remember what the pattern said.  And I'm too lazy to go look.  It's called "Dream Weaver" by Missouri Star Quilt Company.  There's a nice tutorial how to make the blocks.  Which aren't hard, but Jenny did discover a little trick with keeping stuff going the right way since there is some fussiness with pieces.

But once it was done (binding and all!) on Wednesday, I had to start thinking really hard about whether I was going to give this quilt or not.  I thought about what you all had said and wished I didn't have this silly timeline.  In the end, I decided to wait.  I truly don't think I'll be invited to the wedding, but if I am, I can give the quilt.  And if not, I suppose it will have to become Not Philip's Quilt at some point.  Until then, we wait.  The wedding is in 3 months, so I expect in about 2 I'll know for sure.

This past weekend, my guild also had our annual quilt show.  No photos...sorry...  I didn't enter anything.  That's a whole other story, but it's okay.  We had a lot of nice quilts and a nice show.  It sounds like the turnout was quite good, too, so the folks doing the advertising did a good job.  We have tables set up around the room for members to work on projects while the show is going on.  While I've heard mixed reviews of visitors, generally it seems folks like to see us hard at work.  (or giggling...but no one at MY table was giggling...)  I decided I'd take my tiny stars because they're easy and I had a lot of pieces cut and ready to go.  And we share tables and cram ourselves into much less space than we normally would, so this being a smaller-scale project, I could easily share a table.  100 little baggies of sets of 8 squares went with me.  I sewed the first point for every fabric (4 sets of points per block) I took.  I also pressed them.  And they were turning the lights out on me as I was finishing.

No photos of that, but last night, I worked on trimming the wonky sewn points back into squares so I can wonky sew the second point onto all the colors... 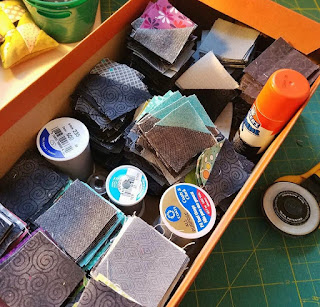 They're all tidy in this box, and it's hard to believe there's 100 blocks (plus extra background squares) in this box, but there are!

This will definitely help my efforts.  I have probably 200 made already, but needing over 1000, this is gonna take a while.  But for the most part, I'm having fun doing it and if I try to push it and rush it, I'm going to hate it.  So I'm taking my time.  (The times I'm not having fun are the times when I trim the background instead of the color fabric.  Or when I sew something wrong and have to unsew it.  But who likes that stuff?)

Tonight the hubby has taken two nephews to see Pacific Rim.  When he left, I went into frenzy mode and cleaned the house.  Gabby, aka Spazarella, likes to destroy paper.  Tear it to shreds with her little, sharp, evil kitten teeth.  I have never seen a cat this determined to shred paper.  So there were bits everywhere.  (And I'm sure she'll make more tonight.)  And then there's the usual - dishes, laundry, bathroom - they all got done, too.  The house will be tidy for the weekend and now I can sew without feeling too guilty.

So what will I do tonight?  Probably tiny stars.  Unless I end up just watching something on Netflix.  Probably sewing, as I look at the clock and realize the movie started 2 hours ago!  But I have found that I can watch some stuff on my phone, using Netflix and headphones, while sewing.  I have to choose more mindless stuff (I've been cruising through "The Office" lately and find that easy enough to follow without really watching), but it's a nice alternative to music sometimes.  (Particularly when Pandora has a bad day and thinks Taylor Swift should be played on the Green Day station...  For anyone who doesn't know who those folks are...Taylor Swift is a young, female pop star, Green Day are punk rockers who swear a lot.  I'm not much of a Taylor Swift fan.)

And now it's off to finish folding the laundry and wait for the hubby.  He mentioned something about bringing home a late dinner.  He's been in the big city south of here with the kids, so I wonder if he'll bring something we can't get locally?

11-19-2019: Philip's Quilt is Not Philip's Quilt.  The wedding invitation never came (not a surprise) and the quilt was instead donated to Saved By Zade, a cat rescue organization, to be used as a fundraiser.  See post from 11-19-2019 for more details.
Posted by Katie at 6:45 PM

The quilt turned out really pretty, and your quilting on it is special. I kinda hope you get to keep it! ---"Love"

you make me look like a slacker!! lol I know it was hard to decide what to do with that 'wedding' quilt - guess it just needs to sit and 'age' for a bit. You lucked out on that UPS shipment; usually they just tell you that they don't deliver to post office boxes ( yet they deliver to post offices); we've had some problems shipping pkgs to our daughter who lives in Wyoming (state) - no one has mailboxes at their homes.. EVERYONE has to pick their mail up from the post office which is open 'whenever' and mail gets 'lost' quite often. We usually have to send her's through USPS while everyone else's goes through UPS.

Sorry ---- I failed to say that both those doll quilts are precious and will be much loved no doubt. ---"Love"

I love your quilting on the large quilt! Perfect for a "possible" wedding gift. Over 1000 of the tiny stars??? Wow! I know you have been making them for a while, but I don't know or forgot what the plan is for them. I'm sure I will find out eventually. I don't know if I would want to make that many of them. Well, I decided to try to find out what the stars are going to be for and scrolled and scrolled down thru your posts until I didn't see them any more and I may have missed - or didn't go far enough - the explanation of what they will be for. So, maybe in your next post you can share again - maybe a picture of what the finished quilt will look like? No pressure here.

Those are two cute quilts and I think the joy of receiving them will put aside concerns over delivery. Love the Not Philip Quilt and your plan to give/not give makes sense under the circumstances. 1000-yikes! Still slow and steady wins that race.

The doll quilts are adorable. They will be loved. The maybe wedding quilt is a beauty. Great fabrics and beautiful quilting. Now all you have to do is decide. ;)

I love the doll quilts, some lucky little kid will enjoy them so much! The wedding quilt is so pretty and that backing is perfect! Wow, all those little stars, I'm amazed at how many you need to make, I will enjoy seeing what you will do with them!

I love your doll quilts. UPS is so odd about shipping to a P.O. box. I only have mail delivered to a P.O. box and UPS will deliver there. In fact, before we moved here, most smaller UPS deliveries were made by USPS. Just makes me shake my head.

I haven't read your back story about Philip's quilt, but it is a beautiful quilt. Perfect for anyone in fact.

You sound just like me when Hubby says he will bring home something for dinner. I always hope it is from somewhere other than our local choices.