Last year, as she did this year, Judy L. hosted a UFO challenge that I joined.  For 2017, I decided that instead of allowing myself to create more tops (the Closet of Shame isn't getting any emptier this way!), I'd make a list of tops and challenge myself to quilt the quilts.  For whatever reason, this quilt got quilted on time, but the binding part lagged and lagged.

But let's give with the whole story, shall we?

At some point before the end of October 2010, I purchased a jelly roll and charm pack of Bonnie & Camille's fabrics "Bliss."  I also purchased the pattern "French Kiss" by Fig Tree & Co.  I loved the colors Bonnie and Camille were putting together - this was their (I think) second line using red and aqua together and I was in love.  A semi-local quilt shop had the fabrics and I couldn't resist.

In late October of 2010, my hubby went on a business trip for a week.  So I took the week off also.  Probably I told my work I was going with him, but what I was really doing was having a personal quilt retreat at home.  I know the date because I can look it up on my blog and see this post detailing some of my work on the quilt.  I got it started!

But it seems, again from searching my blog, that it didn't get finished in that run.  It ended up on Judy L's. 2011 UFO challenge list for me.  In fact, it was the first one on the list, though its number wasn't called until March.  It seems I got the quilt together, after waffling some with borders, again working during a home quilt retreat while the hubby traveled for work.  I did get borders sewn on and, upon realizing they were quite wavy, it went into the Closet of Shame for another day's problem. 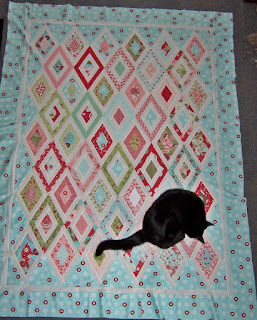 I dreaded its number being pulled, but 2017 was all about finishing quilts and I knew this was one I wanted done.  I mean, I still love it every bit of it.  And I have some leftover fabric of the blue and a red in yardage that I'm using sparingly (aka hoarding) so it never goes away.

Judy pulled the number in December.  (But if you go look it up, she actually pulled #6 a second time in December - with no #10 in sight...oops!)  Out it came and an assessment of the situation began.  At this point, I wasn't blogging much, but I did share photos of the mess on my guild's facebook page and asked for advice.  I was pretty sure this level of waviness wasn't going to quilt out and I'm not experienced enough to really want to try to figure it out.

So I spent a lot of hours removing both the blue and white borders.  First the blue came off, hoping that would solve things, but once it was off, I knew it wasn't much better, but also could see the top itself was laying quite flat.  So the white borders came off and then the debate whether I'd re-measure, re-cut and re-sew, or let it stay small.  I kinda wanted the larger size (the outer blue borders are 4", I think), big enough to really use, but once I had the borders off, I didn't mind the quilt without them.

A decision was made to quilt it without borders, and then the decision of how to quilt it came quite easily.  I did a LOT of quilting, which helped ease the little bit of waviness due to bias edges on varying sides of setting triangles, and it ate a lot of thread and time, but I LOVE the finished quilt.

I had the binding already made a long time ago (I've learned it's nice to have the binding ready to go, so while you're piecing the back or finishing the top, cut and prep your binding and store it with the top - not only does that allow your remaining fabric to safely return to your stash, it's also ready when you are!) and sewed that on quickly.  And then it sat.

I did have a few other quilts that all sorta finished in a last-minute race in December of last year, so it took a bit to not only motivate myself for the hand sewing, but also to get it done.  This quilt was the last in the pile, but today I sewed the last stitch in the binding while sewing with my mom and assorted new friends at a truly local quilt shop. 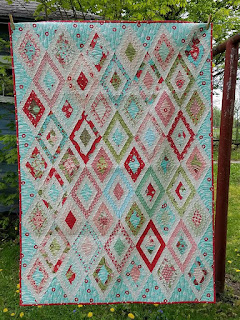 Please don't ask me how big it is.  The cat in the photo above was about normal size (RIP Tucker!), so extrapolate from there because I just got it folded up and stowed away on a shelf that is NOT going to squish any more quilts on there and I'm not going to pull it off for fear of a quilt avalanche!

And a close-up of the quilting, which may have been shown in a 2017 round-up at some point at the end of last year or so... 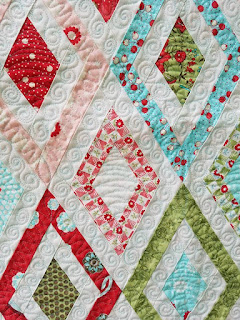 I'm pretty proud of this.  While most of it isn't perfect, I finally feel confident enough to tackle smaller motifs (those strips finish, I think, at 1.25, maybe 1") and do a lot of quilting.  And show it to you all.

And let me see if I can find the photo of the backing fabric, found at my local quilt shop when the number was called in December... 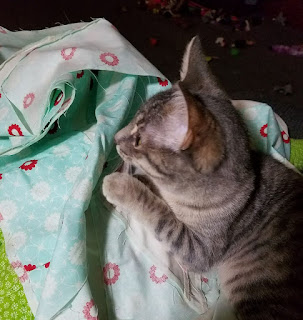 Wait, that's not a quilt back!  That's our newest addition, Gabby, helping me remove borders.  Well, mostly laying on what I was doing because if you move she pounces, so when she sits on you, you gotta sit still.  Still.  I love her to death, but I'm so looking forward to her grown up cat phase because kitten phase...well, you know we call her Spazarella!

Okay, there it is, but apparently I didn't take a photo until after I'd quilted it! 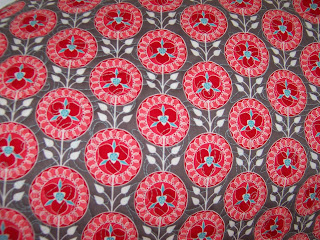 Super fun, right?  Probably a little too busy for most quilt fronts (those medallions are maybe 2" across, so fairly large), but perfect for my tendency towards wild quilt backs.

So there you have it.  Only like 5 months late, but I have officially finished ALL the UFO projects from 2017!

Off to fix the cat enclosure so Spazarella can't also be Houdini and escape again.  This cat...how old is it when they start acting like cats and not whirling dervishes again?

Every step in that quilt is lovely; from fabric selections, pattern, precision piecing, and your quilting is just perfect for it! The waiting to finish was worth it for sure! I've been working on one from the past also. ---"Love"