At 9:30pm December 31st, the elephant quilt binding was finished.  I finished my #0 UFO before December ended! 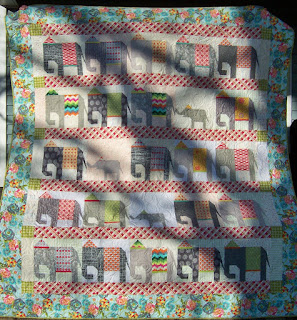 The colors are a little off here, but it's hard to get a good photo of a quilt this large no matter where I put it - trees everywhere make shade and a cloudy day means no shadow, but even worse colors...  Ah well, I like my trees and the shade they provide in the summer just fine, so we'll do with shadowy photos.

"Elephant Walk"
by Peggy and Laura

made with a kit purchased at an AQS show in 2105

I'm so glad it's done.  I'm not sure I can exactly say I enjoyed making the quilt, but I love the end product.  The pattern instructions were fairly lacking (a diagram of the elephant block with sizes of pieces noted inside each piece), but for an experienced quilter, it wasn't too much trouble.  I'd say the worst was having to make a list of all the pieces and what colors to cut just to be sure I had them all.  Having to get fabrics out to cut more pieces is even more frustrating than having to get them back out because you mis-cut something.  And then the tails...paper piecing...yuck!

I love the quilt, but with four cats and that much white, I'm a little concerned about using it anywhere.  I guess this might be a couch quilt, but one that doesn't get flopped wherever when I get up to go to bed at night?!

And this is truly my last finish of 2016.  I couldn't have squeaked much more in there!

My guild donates dolly quilts to a local charity that pairs them with dolls and gives them to needy children in the area at Christmas.  I think I've talked about this before, but it's pretty cool.  The local fire department is involved and they drive Santa around in a fire truck, bells and sirens blaring, on Christmas Eve to make sure these kids get their gifts in time.  I'm an hour away, celebrating the holiday with my family, so I've never actually seen this happen, but my understanding is that to a newcomer, it seems as if the whole town is on fire!!!

So last year I made and donated about 9 quilts.  Some I've shared (in varying states of finished-ness), probably some I haven't.  The gal who collected them did take photos of all we donated:

I think she said we had 48 total.  Our goal was 40, but she panicked around the last month and made about 15 herself.  Not fair to her at all.

I decided in early December that I was going to challenge myself to make one doll quilt a month for this project.  Those of you who have been reading my blog for a while might remember how I did this for a year or two with a different group where I actually purchased the doll, too.  This time I don't have to purchase the doll, but I'm confident if I could do 12 doll quilts in a year before, I can do it again.

I shared my personal challenge on my guild's facebook group and asked if anyone wanted to join me.  They make their own rules for what they want to make, but my real goal was to get and keep folks thinking about this all year, not to panic in October or November.  I had about 5 members jump in and most of them I think will actually follow through, so I'm excited!

I got going really early on my December doll quilt, but stalled out at actually sewing down the binding.  I don't know why - it took about an hour total - but I did.  But I also finished it before the end of the year.  One down, 11 to go! 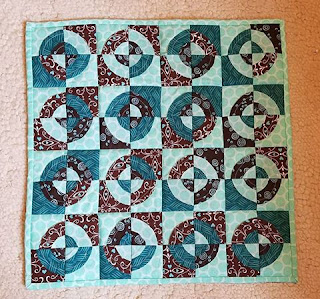 It measures about 16"x16" and is a raw-edge circle technique that you cut it into quarters and sew those back together.  I thought this would be simple to get matchy fabrics not touching...not so much!  But I did it.  I just quilted in the ditch with my little machine to make it easy.

Most of the fabrics (all except the lighter brown) came from the bag I got at our UFO auction a few months back.  I still have a few fabrics pulled from that bag that I really want to use, then it will be more of a challenge, but my plan is to use those as a starting point and pull from my stash to finish.

I've already gotten the January top done (no photo yet) and binding made, but with retreat looming and having to go back to work tomorrow, the quilting of that isn't likely to get done any time soon.

It's been a busy quilty weekend here, too, besides the elephant quilt and January doll quilt.  I also cut pieces in preparation for retreat - I cut pieces for blocks #5 and #6 for Arcadia Avenue!

I'm tempted to keep cutting for more blocks, but don't want to get too far ahead of myself either.

I knew I was getting low on white.  I don't know how much I bought, but this quilt EATS fabric.  It's paper pieced, so it starts there.  And then you cut pieces ahead, which is fantastic and makes it super easy, but they're often rectangles, which I cut from strips, so fabric goes fast.  (Block #6 ate about 1/3 yard of fabric for the color alone!)

So I went back to JoAnn Fabrics, where I bought the first chunk of white.  I even saved my receipt so I'd know what brand I bought.  At the time they were carrying a Made in the USA brand.  Guess what?  They don't have it any more.  At least not at the store I went to - where I bought it in the first place.  So I looked around for something similar in color and weight.  Kona was too heavy.  Muslin was the wrong color.  But I found one bolt of white that matched and seemed the right weight, so I went and bought 5 yards of it.  I brought it home and threw it in the washing machine, scratching my head a little at how much space that 5 yards seemed to take up in the washer.  And the dryer.  And then I pulled it out to fold it sloppily until I ironed it.

I'm not sure exactly how wide it is, but I'd say I actually have about 10 yards of white fabric now.

Guess I won't run out.

But this brings me to the next reason I don't want to cut more blocks.  I attempted, with the help of my hubby, to fold that monstrosity of fabric.  Nicely so I could cut it easily.  Easier said than done!  I may decide, when I get to that point, to lop off a smaller chunk and fold it properly, but these blocks do take quite a bit of time to construct and I have a few other projects for retreat, so it might not become an issue for a while yet.

As for preparing for retreat, I stopped by one of my local quilt shops today and picked up some white fabric to sash my Max & Whiskers quilt I shared in a previous post.  The pattern says 1 1/8 yards, so I said let's go with 1 1/2 yards just to be safe.  (This pattern seems a little sketchy from my first reading, and though I'm confident I can figure it out - it's not that complex - I don't want to run out in the middle of retreat either!)  The owner questioned if that was ALL the sashings and I decided to just round up to 2 yards to be safe.  It's off-white Grunge, so it will be useful somewhere else if I don't need it for this project.

So Project #2 for retreat is ready to go.

I'm still contemplating the 30's bundle as retreat project #3.  I found another pattern today in a book (I found a stash of books that hadn't been put away, so why not leaf through those instead of washing dishes?!) that I rather like.  It would require more fabric to be purchased, but I'm on a roll there, so why not?

So if you're still reading, I'm open to suggestions. 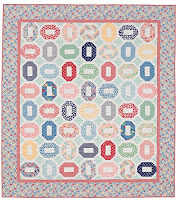 "Candy Bracelets" on the left (or top), "O Happy Day" on the right (or bottom - depending on what Blogger decides to do with these images).

And last on my list of things to share is that Judy picked #3 from the UFO list.  That's my "Christmas Pickle" quilt.  The one quilt I SHOULD be quilting.  The one quilt that I'm TERRIFIED to quilt.  I was really hoping she'd choose that one in December, but I suppose if I can get this one out of the way, the rest of the year will be easier.

With that, I'm headed to relax a little and then head to bed.  I have a 2-day week ahead with leaving for retreat on Thursday, but I'm sure that won't make the amount of work I have to do in those two days any less - probably more!

The elephants are beautiful.
Enjoy the Retreat. Looking forward to see what pattern you choose.

Your elephant quilt is simply charming and as time passes you'll forget the grief piecing it caused you (hopefully). I'm afraid I had to chuckle bout your buying the extra width fabric. At least it's white. For your 1930s fabric - Candy Bracelets is my pick. Christmas Pickle is first up, eh. Once it's done, the rest of the year should be a doddle. Happy Quilting!

The elephant quilt is great! I like the little elephants in with the bigger ones! Wow, you have gotten a lot done and ready for your retreat. Have fun sewing with nothing else to worry about. Hmmmm, Christmas Pickle is a wonderful quilt, are you sure it is number 3 on your list? Maybe it just looks like a 3 and it is really a number Judy hasn't picked yet.

Your "Elephant Walk" quilt turned out really well - Congratulations on getting it done before the end of the year!! The doll quilts are cute as always. I laughed at the extra wide fabric - I've done that - more than once - LOL. "O Happy Day" would be my choice of the two patterns - and could you swap out "Christmas Pickle" for another number? - we won't tell - ;))

I am exhausted just reading this post. The elephant quilt is beautiful. You will definitely have to hide it from the kitties! Candy Bracelets gets my vote, although either pattern would make a wonderful quilt project. I have bought extra wide fabric, too. I think it took almost 2 years to use it up! Hope you have a wonderful retreat, Katie. And, if I haven't already said this, it is so nice to be reading about your quilts and kitties (and life) once again.