I'm still not sewing much.  It's still hot and I'm procrastinating my Rainbow Scrap Challenge blocks, as usual...

But there HAS been some sewing...

I cut pieces for my July UFO (block 12 of Arcadia Avenue).

And forced myself to sit down and sew some here and there.  I thought it would take longer for each set of pieces (16 sets total), but they're smaller pieces, so at least shorter seams for many of them made sewing time less! 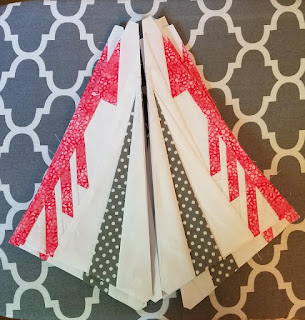 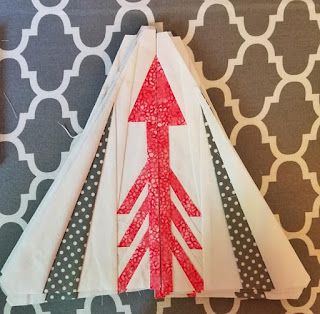 The day I was working most on this was an actual day off work, but between the hubby having a half day to go to the dentist and the septic sucker guy making requests to water the ground where he had to dig and the hubby texting, it was slow going.  I was happy to at least get them this far! 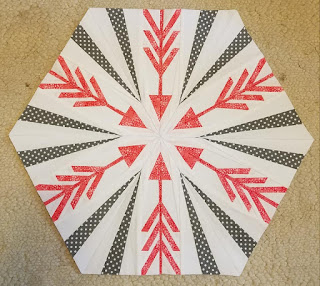 Not perfect, as paper piecing aficionados try to promise, but good enough.  Two more to go and then I get to put them together.  And pick out all the paper bits.  Ugh.  (But I bought a super pointy tweezers a while back, so that will be at least easier for that!)

In other news, there were two quilt shows near me this weekend.  One was Friday and Saturday and the other was Saturday and Sunday.  Between work shifts, I managed to do both!  Friday I went with a friend who recently moved away, but was back for a few days, to one of the shows.  The quilts were wonderful, but we had way more fun at the "garage sale"...great stuff, great prices!

I got these lovelies, ranging from fat quarters up to three yard cuts: 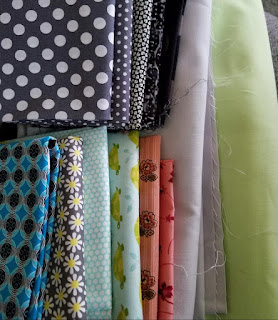 The grey and lime green I'm hoping to use for quilt backgrounds.  The remaining pieces were just fun, though that one Civil War pink went directly to my mom, who uses such fabrics.

Then I found these...

I think these are Cherrywood fabrics.  And most are at least a fat quarter.  I haven't opened them all up yet (it's been a busy weekend!), but I got this big stack for $7.  Yep, $7.  I kinda have an idea for these, but we'll see where the squirrels take me.  Worst case, they end up in my stash or shared with a friend somewhere along the way.

The second show didn't have as great of a garage sale (of course, getting there on day two didn't help!), but there were a few quilts that caught my eye and I remembered to take photos.  My mom went with me and being a more traditional quilter who likes Civil War fabrics, these mostly got the thumbs down, but that's okay.  We both enjoy quilting and realize we don't like the same things, but can appreciate the techniques involved and understand what is good workmanship, so it's all good.

I should have taken photos of the tags, but, well, I didn't... 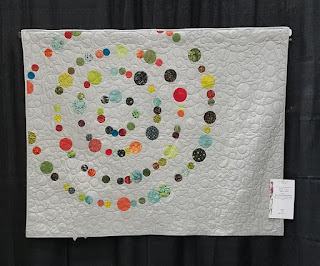 This one is just fun.  But the closer you get, the less you see the secondary pattern of a circle of circles. 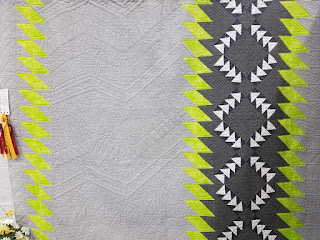 This one has amazing quilting that continues out from the green diamonds.  Very much an inspiration for me when I have too much negative space! 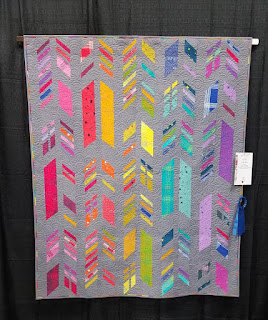 I've seen this pattern before, but it's even more striking in person.  And just fun. 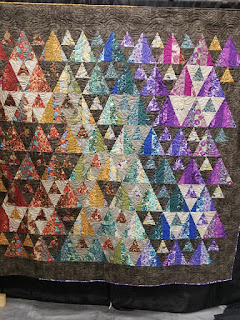 And last, this one caught my eye for the pattern, but the colors weren't just doing it for me.  I stepped back to take a photo (because I really do like the pattern) and the quilt really took on a new life through the lens of my camera.  It's still a little darker and less-contrasty than I might have done, but I do like it a lot more this way.

After the show, we headed to the quilt shop that's not only near this show, but open on Sundays!  I picked up a set of TriRecs rulers for a project squirrel I might be starting soon and my mom picked up a few pieces of fabrics.

Then we headed to a little larger town a few miles over and got lunch at a good Mexican place and then headed into JoAnn's, as they have a good sale on calicos and I had an extra 25% off coupon that came special, separate from the usual mailer, in the mail last week.

I got this fabric for the back of my Rows of Cats quilt: 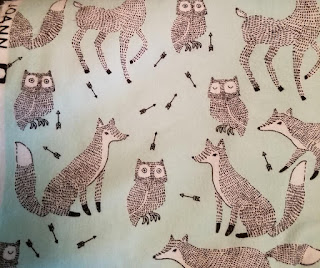 And this one for my Tula Pink Tabby Road plus quilt: 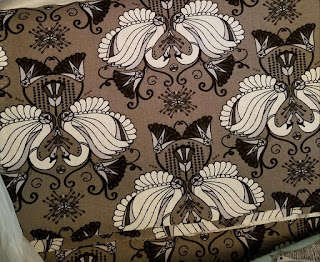 I'm pretty excited about both and they're in the process of being washed right now.  It's hot out, but I'm doing it anyways.

And then there's that squirrel...  There's this blog hop/quilt along going on over at Confessions of a Fabric Addict's blog.  I'm really tempted to make this quilt with the leftovers from the quilt I made for the hubby's aunt and donate it for one of the charity groups my guild helps...  We'll see how today goes...I hurt my back Friday night, so the weekend was kind of a wash.  Today it feels better, but I've got to play catch up on all the chores that were neglected over the weekend.  I'm nearly there, but the day is passing quickly, I have a mess in my sewing room from my new purchases, I have to work later and it's hot upstairs!  (We'll see how loudly the squirrel is hollering when I'm done blogging and finish the remaining chores...like putting the sheets back on my bed that are currently in the dryer...)

So that's it for my fun lately.  It seems like a lot here, but doesn't seem like much in real life...

Oh, and let's leave you with a photo of now 1-year-old kitten, Gabby, practicing that teenager selfie look I see so often on social media... 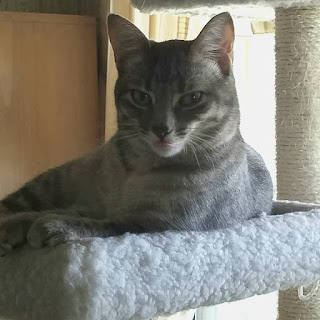 (totally candid...she and the other grey kitty were both on the cat tree, so I thought it would be a cute photo...then I realized what she had done...little brat!)

Happy quilting,
Katie
Posted by Katie at 9:48 AM

Your hexagon block looks perfect and it gorgeous! But doesn't look like fun to make - I had a lot of "not fun" ones in my DJ quilt, but one just goes ahead with it anyway and they come out great, don't they? Of course I always had to rip a lot of those tiny stitches out and fix things. I can enjoy modern quilts even though I'm more like your Mom when it comes to quilting. Some of the modern ones are very striking - and of course some I don't like, but that's fine. I love quilt shows that have garage sale areas. I have found lots of things that way. One of the best is in Salem in November - Quiltopia. The actual show is rather small, but they have a great big "sale" area. I'm already looking forward to it.

you missed out on some really great stuff by having to wait until Sunday to go to the show in Marshall... I helped a fellow quilter decide whether or not to buy this gorgeous, hand stitched 1" hexi quilt top ( for $100 and too rich for me). I wish I had taken a pic of it- it wasn't fancy, just very nicely stitched TINY hexies... about 47 x 78 but will look great on the back of a couch, which is what she plans to do.
Gabby looks so pretty :)

WOW - that IS a lot stuff happening! Sorry to hear that you hurt your back - hope it wasn't serious. I like your hexagon block - and only TWO more to go - good for you! Your "stash enhancement" acquisitions are pretty - how lucky to get all of those Cherrywood fabrics for $7. The "Circle of Circles" quilt is now on my Squirrel list since I have some circle dies and some fusible in my stash - THANKS! And your Gabby is something else - LOL - ;))