I've been up to a LOT in the last week, but I need to get these 2019 quilts blogged before it gets too much further into 2020, so here we go!

Since I don't remember how much I told about this quilt as I constructed it, I'll just start from the beginning.

Quite a while ago, my high school friend Sarah (who got her own quilt here) announced via Facebook that her oldest daughter, married a year or two ago, was pregnant.  This is the friend that, with her pregnancy of this daughter, started me on my quilting journey.  Of course this, my friend's first grandbaby, needed a quilt to celebrate!

The birth announcement had bees on it.  I'm not entirely certain of the relevance there, as our lives have taken different paths in different cities and we're not that close any longer, but I thought that bees on the quilt would be fun.  So I contacted Sarah to make sure the quilt would be okay (and not weird) and bees were acceptable.  Both were given the green light, so off I went to buy fabrics. 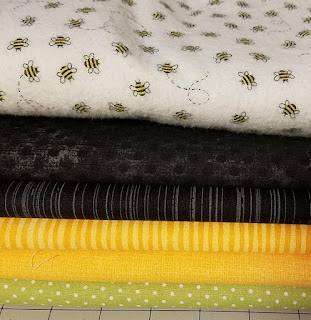 I had a pattern in mind, but I'm not sure if I even had it handy when I went shopping.  The pattern was for a single bee anyways, so I had to wing it.  (ha ha ha ha ha!)  The flannel on top is for the back.  How perfect!

I dug right in after washing and pressing everything. 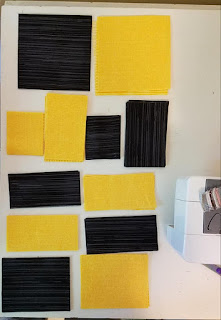 Not too many pieces...well, compared to a Sasquatch I constructed recently... 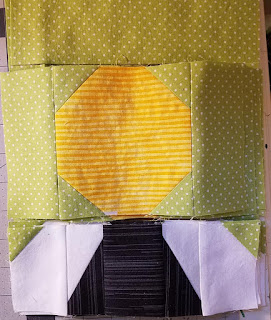 Now I just have to sew the strips together.  Those stripes going different directions were kinda annoying and I tried to cut them properly, but at this point, I was ready to be okay with them.  (I was also struggling because those elongated half square triangles weren't going to have points where they should have been - I'm not sure if it was the pattern or me, but I also made my peace with those.) 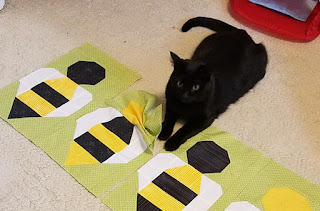 Once the bees were together, I had to decide on a layout.  Freddie helped.  (Yes, that is a devilish look on his face and yes, he was messing things up about as fast as I could fix them.) 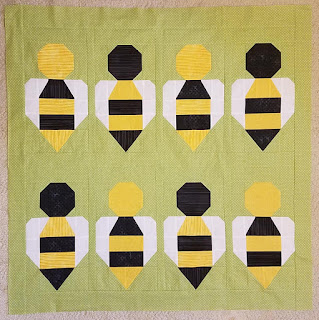 Once the helpers tired, the top went together quickly.  Technically this is just eight blocks with sashings.  Not too bad!

But those bees needed antennae and this was before my amazing garage sale bargain of a $10 light box.  Once the top was together, using a window to trace the lines wasn't going to be very easy.  But wait... 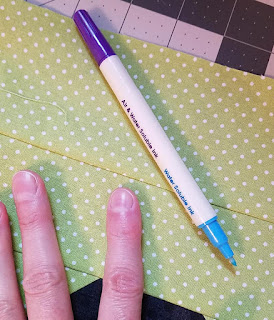 My finger is just about right!  Well, that was easy!

Embroidering them wasn't so easy, but I got it done one night.  With the birth looming and knowing the quilt needed to be mailed, I was finally urged on to get this step done.  And get it on the longarm! 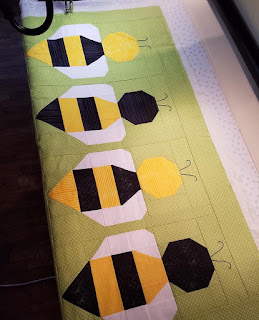 I wimped out and opted for just loop-de-loops over the whole quilt.  (After I pieced the back that shrunk to be too narrow...I had bought enough extra, anticipating this happening, but it was still annoying!)  It went super fast and I was ready to bind it in no time.

And finally, I had a finished quilt! 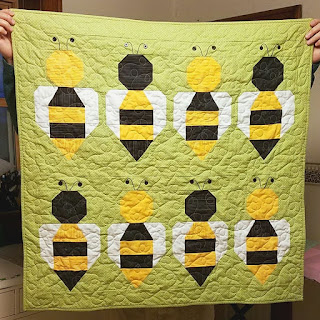 Of course, I did not plan ahead, so I had to take the photo indoors, later in the evening, as a post office run had to be squeezed in the following day, so the lighting isn't great.  But there it is.  It looks kinda small in the hands of my hubby, but it measures about 34x35.  Not huge, but with bees being a very rectangular specimen, it got harder to make it larger without making a LOT more bees!  And I think this is a good enough size for a little one.

I sent it off, knowing mom was due early 2020.  I wasn't sure if there had been a baby shower, if there would be, if this quilt would be given immediately or saved or what.  But I knew it arrived and that was enough.  My friend was the go-between and I trusted her judgement.

A few weeks ago, I was tagged in a photo on Facebook... 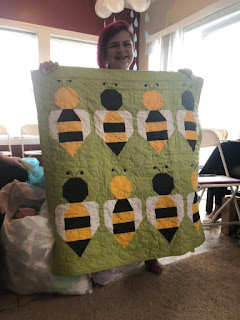 Sarah said those are happy tears.  I didn't really see she was crying until prompted, but yes, it does look like she is either squinting into the sun or maybe crying.  She loved it.  And I'm going to guess that this gal, who has never met me, was absolutely surprised.  But she is the reason I quilt, so she deserves this.

Baby was born just a few days ago.  Mom had a rough go and both were still in the hospital recovering yesterday.  I hope to hear good news soon, but they've been in my thoughts a lot these last few days.

Okay, now what I have been up to recently!

First up, Sasquatch is a top!

I used the design floor last Tuesday (or was it Wednesday?) to figure out a layout... 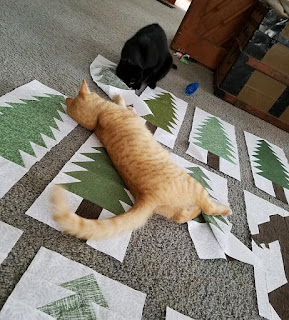 (Of course I had help!  Please ignore the cat toys.  The cats do.) 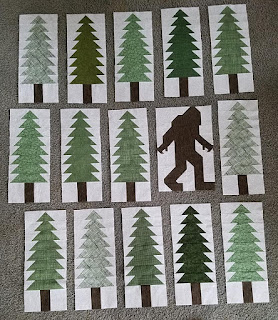 And then sewed it up into a top! 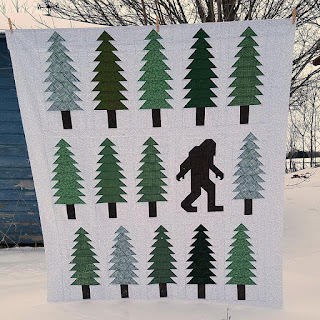 I also pieced the back (yuck!) and made the binding.  Now it is properly read for procrastination until about November...

Up next, while waiting for the next Project Quilting prompt (due out Sunday at 1pm my time), I decided to cut pieces for the Triple Crown quilt project.  My blue/turquoise stash is overflowing into the purples, so it was time to do something drastic.  And I had a hunk of white just sitting there.

Yeah, that's a lot of different fabrics.  A few got put back because they weren't turquoise enough, but quite a few more are no longer in my stash at all!  The spot where they live is ALMOST large enough now, with just that bottom fabric hanging out where it shouldn't be.  At least five of the fabrics in here have come from quilt backs, so I had long, skinny leftovers.  This was a good project to use them up, as it originally calls for a jelly roll!  And though it doesn't seem like a lot, I feel my stash was visibly reduced at least a little. 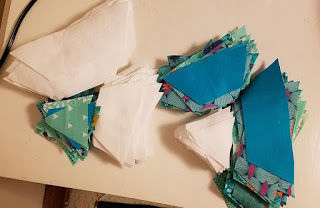 And then I sewed. 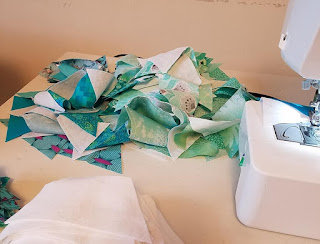 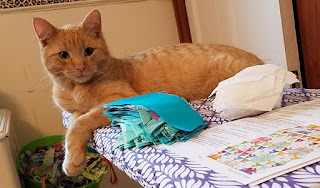 Finn is learning how to supervise.  More often, though, he likes to help. 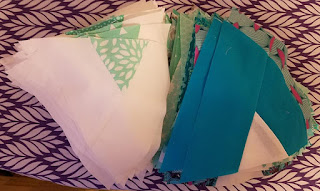 The blocks are all sewn, and I debated trying to lay them out either Saturday evening after work or at some point Sunday morning, but time got away from me and, let's be honest, I wasn't in the mood to crawl around on the floor and label 204 blocks quite yet.  Soon.

And then the Project Quilting prompt was announced.  "Team Colors."  It doesn't have to be a sports team, just anything with colors that represent it.  I went to Michigan State University and of course those colors are the first thing that came to mind.  But I just wasn't into making an MSU quilt.  I mean, I've made one before, and it occurred to me to dig out my pattern and make another, but that would be a big task and I just wasn't feeling it.

So, since we were out doing errands in the big city north of us, I had time to think while driving (and my hubby played his silly game on his phone and, if he answered me at all, it was in grunts...boys...) and I kept thinking.  I've been green and white literally since kindergarten.  Every school I've attended has had green and white as their colors, though the mascot changes.

And then I remembered these maybe-Cherrywood fabrics I snagged at a guild garage sale during a quilt show a while ago... 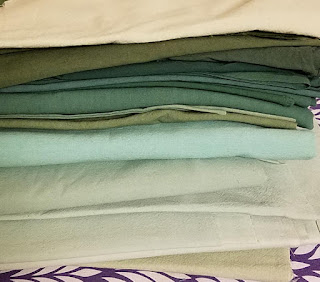 ...and remembered my idea that I wanted to use them to make a tree quilt.

I had recently seen a video to make wonky trees and revisited that (and had to watch it a second time because I flaked out and didn't catch everything and then sewed things wrong) and was off and running.

I'll share more of my process and whatnot soon enough (I don't want to repeat myself too much), but I thought you'd at least like to see Gabby helping... 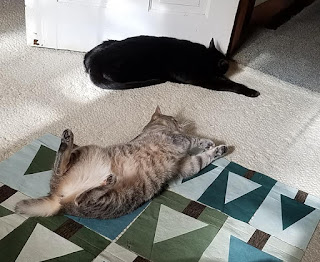 She was trying to get Freddie to help, but ever since Finn has come to live with us, he generally declines the helping with quilts and snuggling part of catting.  I think he is happy, but I worry...of course, about the time I seriously think he is depressed, he goes tearing through the house after a milk ring like he's never seen anything so amazing before in his life...

Speaking of doing things that make me believe he is happy, Freddie did help, now that I think about it... 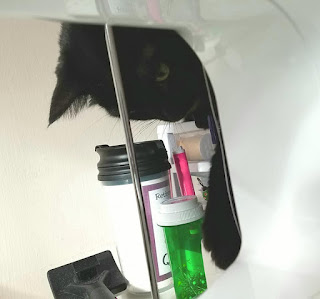 ...he inspected and pre-moistened my thread.  (Yeah...that did cause some problems...)

And while this was happening, Finn was taking a turn at camouflaging himself... 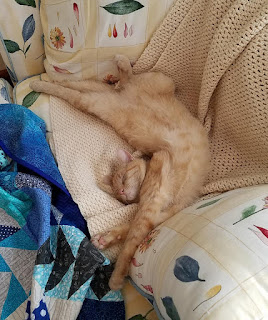 He's pretty good!  (Gabby melts into our blue-grey carpet quite well - as did her sister Lexie - super fun when that decision happens on the stairs...  Freddie, being black, stands out in most situations, but we regularly trip over him in the evening when walking through the house without turning on every single light... Ah, cats.  We love them.)

And with that, it is dinner time!  I'm keeping up with my one book a week reading goal and plan to do more of that tonight after I eat.  The challenge quilt blocks are all made and a layout has been chosen and labelled and picked up already!  I work a long shift tomorrow, so construction will likely commence Wednesday with longarming perhaps Thursday or Friday...we shall see!  But I feel confident at this point to stop and take a break.  And my next post will likely be about my finish!

Love your long posts!! The stripes on the bees going different directions give them personality - and the Sasquatch top didn't seem to take you long at all! It's always fun to see photos of your "helpers" helping - and Finn camouflaging himself - now I'm looking forward to seeing your triangles and tree tops - ;))

I'd forgotten about that bumble bee quilt...it makes it more special when the receiver loves it, doesn't it... I'm sure that 'someone' will enjoy Sasquatch just as much :)..

That baby quilt is the bees knees! (tee-hee). I just love your newsy posts and all the amazing projects you are working on. Kitty-cat antics are an added bonus.

I love everything about the little bees quilt, it is just adorable! Sasquatch is great, too. I know your Dad will love it! The fabrics for your Triple Crown are so pretty, and it's fun to see all the kitty help you get. Just so much fun! The tree quilt is looking good, too. All your projects are coming along nicely.

The bee quilt is darling! And I love Sasquatch. Last year I gave one of my sons (who has 2 boys) a handy Sasquatch hunting booklet. I wonder if they have used it yet. The tree blocks don't look very wonky to me, but, of course my view was hindered by your helper.

The Bees and the Trees!!!
Girl, you are the Bees Knees!!!