You may remember a while back, I decided to participate in the Jelly Roll Waves quilt along? 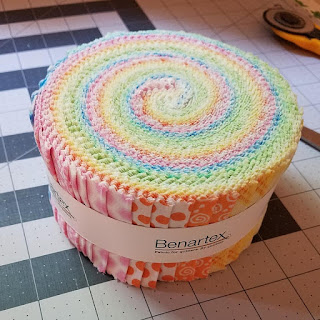 ...but I stalled out even before starting to cut.  I think part of my problem was the number of colors and patterns and trying to wrap my head around how it would all fit together.  This is my usual trouble when using precuts, but since this one was purchased for me, I can't be blamed for the problem.  (Remember, I swore off precuts without a purpose a while ago...and I've been very good!)

But finally, I worked out a plan and got busy cutting! 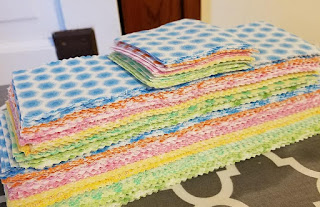 This still didn't motivate me a lot to sew them, but I was getting closer.  And finally, because there were weekly (or every other week, depending on the step) link-ups, and I wanted to participate, I decided it was time to get with the program. 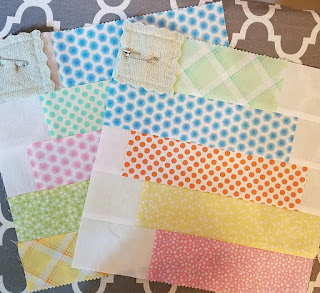 I think this will work!  And the colors are so sweet.  Very springy, but also a refreshing change from my usual in-your-face brights!

Since the weekly link-ups were set up for half and all of the blocks, I have a few in-progress shots! 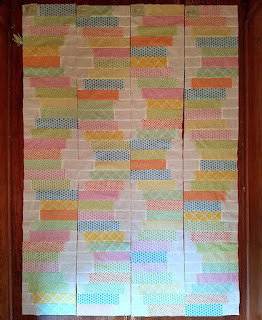 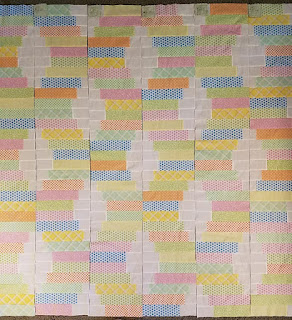 That is not to say there wasn't help laying them all out to make sure there weren't too many of the same colors in the same areas... 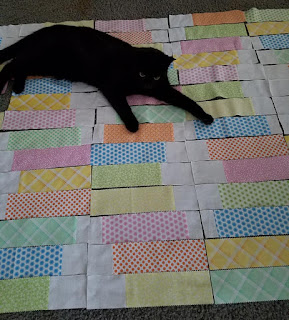 The columns went together fairly fast, despite all the seams I had to match and pin.  Thankfully, they were just straight seams, no points or anything to fuss with.

And then it was a top! 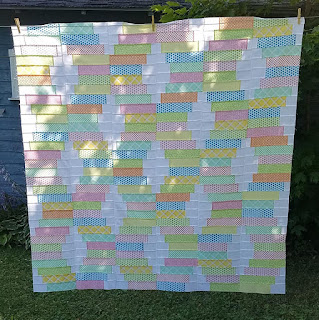 Despite the final quilt reveal not being until this week, this was the second quilt on the longarm during Longarm Week. 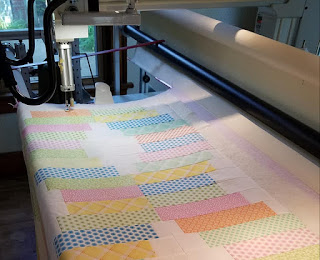 I decided to do my echoing heart motif that goes quite fast.  And it did! 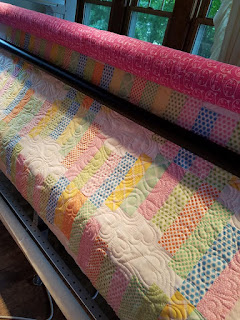 Before I knew it, I was unloading it and realized I hadn't taken an in-progress shot!  So I guess this mid-removal shot will have to do!

I had prepped the binding ahead, so it was just a matter of sewing it down by machine and then another Gilmore Girls marathon to do the hand-sewn side.  It went fast, but when your mind is occupied with things other than binding, it does go faster. 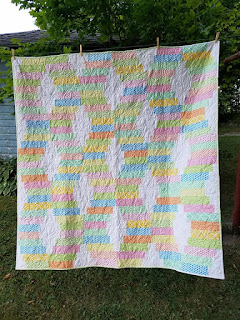 And there you have it!  It looks all crinkly already, but it has not been washed.  It is slated to be donated, so I will let whoever receives it make that decision later. 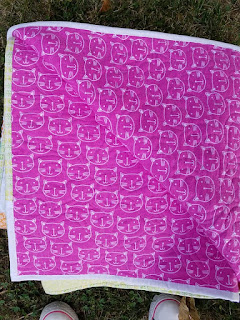 I was trying to stay away from anything too girly, but decided that this hot pink kitty flannel was too cute to pass up.  And the colors on the front really don't lend themselves to making this a boyish quilt anyways.

But this quilt is not what I have been doing this week. 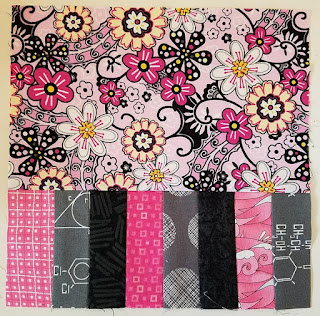 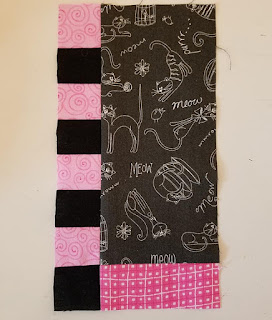 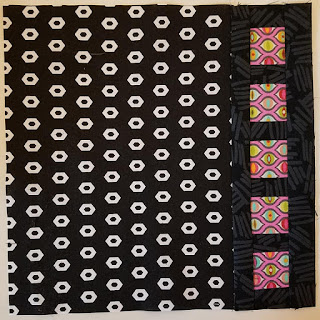 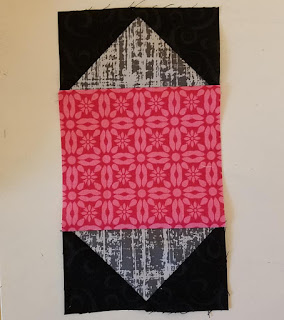 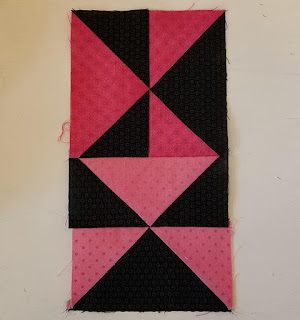 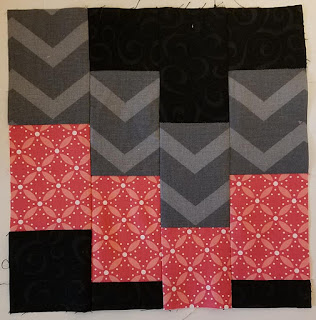 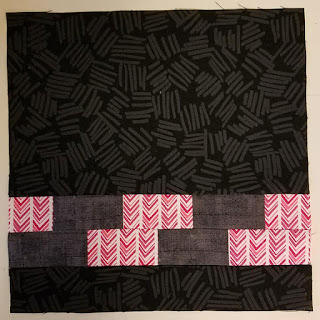 Well...that didn't load in order, but whatever.  That one with the chevrons up two?  I fussy cut them so the points would be centered.  Bonus?  They matched up at the edges!  I didn't even try when I was sewing and they came out that well.  Go figure.  When I actually try, things never go that well.

I also worked on sewing blocks for Adrian's quilt after the show with my sister-in-law.  I got through all the turquoise blocks and then, this week, I worked through the purples! 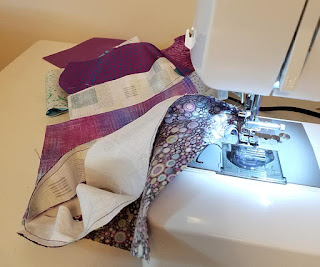 I have done my Tuesday chores already, which means the design floor has been vacuumed, so tomorrow I hope to get the blocks all arranged and start sewing the top.  Of course, little (who is not little at all any more) Freddie is currently chasing the sunlight streaming through the trees in that space...and the trees move, so the sunlight does, too, and he thinks it's grand fun.  I know I keep saying it, but this cat is such a goofball.

Remember how there was an adoption event at work in December and that's how we ended up with Freddie?  And how I told my boss not to schedule me any more adoption event days?

Well.  She did.  This past Saturday.

And I resisted, though there were tons of adorable kittens.  So many black ones.  And tabby ones.  And this guy... 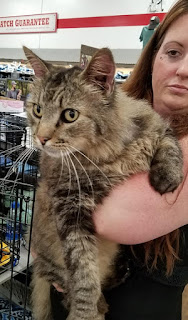 Chocolate Kisses.  He is 5 and weighs about 18 pounds.  His former owner (a man) passed away and he ended up in foster care.  My parents had adopted two senior kitties who looked a lot like this guy a few years back, from a lady who had also passed away.  Those kitties have crossed the rainbow bridge after spending their final years in a good home, so my parents have just two kitties right now.  So I sent my mom this picture.

My dad said no.

My mom said to send the pic to my dad.

In a little over an hour, they were there to adopt this guy.  The group doing the adoptions even lowered the adoption fee because it was going to "an employee"...not entirely true, but they knew my parents were coming for him and were happy to find an older cat a home.  (Everyone loves a kitten (until they climb your bare legs and pull down the curtains and wake you up by pouncing your face when you breathe in your sleep...))

My dad, growing up, was a "NO CATS!" person.  We had cats, but he was just as aloof about them as they were about him.  But in his old age, he has mellowed.  And this kitty was a man's cat, so guess what?  This guy follows my dad around and jumps in his lap every chance he gets!  He settled right in, the other two cats not even giving him a proper hissing to welcome him.  And my mom sends pics about every day of the new spot he's found to lounge happily in.  He fit in so quickly and I am so glad he found a new forever home.

(And my husband is happy we don't have any more cats living here than we had before I went to work that day.  That's not to say I didn't donate a bunch of food and litter to the entirely volunteer and donation funded rescue group.  But seriously?  Anyone who can give me such a wonderful cat as Freddie deserves all the donations I can afford.)

And with that, it is time to go make myself some dinner and relax.  I worked today and it was a busy day, so I'm looking forward to some kitty snuggles and a good book!

Whoot Whoot!!! Glad you got back rolling on the Jelly Roll waves!! it looks great!!

It definitely gives off a girl vibe with the pretty soft colors. Love the backing, too! Your 100 blocks are coming along well, too. It was quite a happy accident with the chevrons, it's great how they worked out! Can't wait to see more of your niece's quilt as it progresses. You have been busy!

What a sweet ending for the kitty story, a new home with your folks. Hope he has a long wonderful life with them!

So I followed the link on your jelly roll quilt and saw that you won some patterns - Congratulations on your win!! Your blocks look good - and Freddie is such a good helper - love seeing photos of him. I'm glad your parents adopted Chocolate Kisses - sounds like it worked out nicely for them and him - ;))

The jelly roll quilt is very interesting. I've never bought a jelly roll; maybe I should someday. Your 100 blocks intrigue me more and more with each one. Can't wait to see how how you get them all together. ---"Love"

I love the jelly roll quilt and Love, Love, Love the hearts quilting! I have never purchased a jelly roll, but recently I came across some jelly roll parts (it looks like it must be a couple jelly rolls and someone gave me at least 6 years ago), with matching yardage. I had been thinking about making a quilt around the world with it (with scrappy blocks, not a huge one block type, but one like Bonnie Hunter's scrappy trip pattern. Maybe your JR pattern would work well with those. I will have to think about it - don't really have time to do it now, though. Your Dad sounds a little like DH when it comes to pets. DH would originally say NO, but when the pet arrived, he would warm up to it pretty quick - never admitting that he liked it, however.

Katie, the jelly roll waves quilt is so sweet - like freckles on a little girls' face. I love the fresh and spring-like colors. And the fabric on the back is so much fun. If you can part with a scrap or a sliver, I'd be thrilled. The cat and the dad story is both funny and heart-warming. Love this post for so many reasons!!!

Your Jelly Roll Waves quilt in calm colors is beautiful! Thank you for participating in the Quilt Along.