row exchange - catching up and reveals

As I was thinking this afternoon about blogging about my UFO progress, I wasn't sure how much I wanted to reveal.  And I honestly haven't done much sewing this week other than today.

But then I realized I have a few quilts and projects I've never shared - one of them is the row-by-row exchange I did with my guild in 2015.  Well, it's about time for that, right?

I'm not sure how much I've shared, but I know the rows I made were kept hush-hush because I wasn't sure who was reading my blog.  They have all had their rows for a while now, so I think it's safe!

The first box I got was for Margaret.  She'd made this row:

and included this great stash of fabrics: 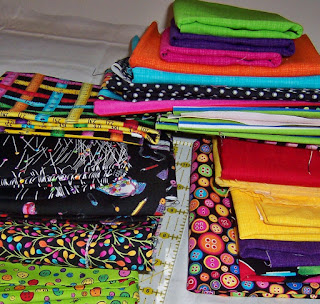 It was almost overwhelming the selection and variety, but she'd asked for quilting-themed blocks and when I saw this block, I knew it was the perfect fit! 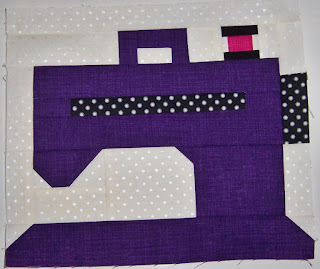 I drafted the pattern myself from a few I'd seen online and this was my test block.  I don't often make them, but wanted to be sure my math was right.

I even paper pieced the spools!!!

Perfect, right?  It was fun choosing the fabrics for accents - the thread colors and machine bits.  I used some strips and bits that wouldn't be usable otherwise.  And since this was the first row in the box after hers, I set the bar kinda high.  Oh well!

Next up, I had Mary Jean's box.  She provided this row:

She wanted Michigan-themed rows.  I'm not exactly sure where she thinks all these moose live (I know there's some in the upper peninsula), but I might have chosen deer?

Anyways, she had included some more traditional-colored fabrics, and I was kinda stumped.  What should I make?  I could do the state bird or flower?  I spent too much time on Pinterest...and then I found it... 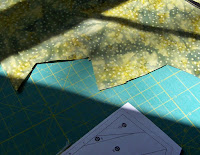 It was paper piecing and I had to purchase the pattern and fabrics and resize the pattern for what I was going to make, but what about a fish?  I mean, there are a lot of lakes, right?  The original pattern is a rainbow trout.  I kinda took some liberties and it looks a bit more like a cross between a bass and a trout, but it's a fish, okay?

I even went so far as to purchase a few small fly fishing lures to include, but put them in the box with a note, knowing they'd be hard to longarm around!

They were kinda fun to make, but I don't see more of these in my future!

Next was Polly's box.  Polly included this row made with Kaffe Fasset and like fabrics:

From this row you can pretty much see how many and the wide variety of fabrics she included.  Kaffe Fasset's style is truly nothing I would choose, but this project was meant to stretch us, right?  So let's go.  Pinterest and I had some fun again, but Polly is a realtor and had asked that we do something related to houses or home - whatever that meant to us.

I found a pattern that had used Kaffe Fasset fabrics for houses - God-awful busy, bright houses - with traditional blocks for the main part of the houses.  Get out the graph paper again and I even found a site where I could download paper piecing patterns for a small-ish pineapple block! 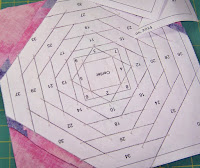 (what is it with this project and paper piecing?)

There were other blocks:

The 5x5 grid.  I kept looking at it, thinking UGH.  Then I realized, it's ugliness to me is PERFECT for this project!  Nailed it!!! 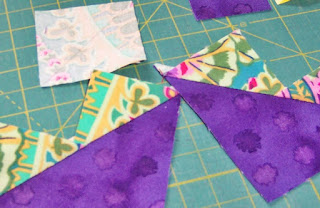 Some flying geese.  This one took some math, but I got it. 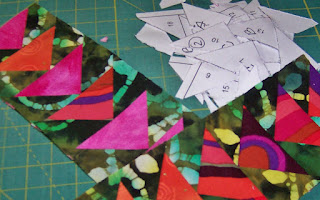 These geese, too, were paper pieced.  I'm not sure what went wrong and you can't see it here, but there were some short geese by the end.  Oh well...they're all matching, so whatever.

And the last row was Ruth.  This one actually gave me the hardest time!

She wanted flower blocks.  It could be flowers in the blocks, blocks named for flowers, whatever.  This was the last box for me, so there were already four rows in there.  That made it even harder because I was trying to fit with what others had done and not give her a totally wacky row.

I searched the internet and my quilt books for blocks that had flower names.  I found a few I liked, but of course they were too big or too small to make a row the proper length without huge sashings between or major remaking of the pattern.

I had about three ideas that I tossed out one after the other.  Time was closing in.  I didn't have much wiggle room left - I needed a block!

And then it hit me.  Why not use flower prints and make a picket fence that they're poking through? 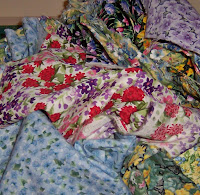 I went to my mom's house and raided her stash of florals.  I knew she'd made a floral quilt with stars formed by the sashings, and she's a scrappy quilter, so I knew she'd have what I wanted.  Ruth wanted all fabrics washed first, so I had a project there first, but as you can see from the above photo, I had no shortage of fabrics I brought home.

I designed the block to fit the size I needed, but tweaked it a few times before I was happy - you can see below I made the fence pieces from paper and layed them on the fabric to be sure I had the right proportion of fence to flowers... 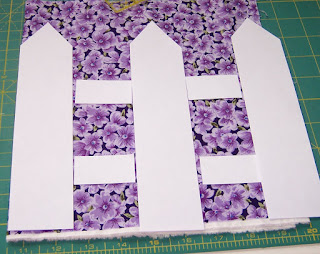 I made sure the flowers weren't entirely the background - I used blue for sky above the fenceposts, but varied the amount so it seemed more like the flowers were growing more here than there.  Kinda like a normal garden...or perhaps a slightly overgrown one? 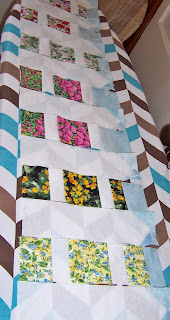 I tried, too, to make the colors flow into each other so it didn't seem too choppy.

And at the end, I had a row I was fairly happy with...

Clearly Emma approves.  Let's see if I can find a photo that hasn't been bombed by a cat (this one was already edited - I didn't realize she was in it...)

I guess this one is a little cut off on the one end, but you get the idea.

It wasn't as smooth of a transition to the sky as I had thought in my head and I might do it differently if I did it again (applique a curve perhaps?), but it's done and I think it fits her request.

And then there's my set of blocks.  I started out with this row and a request for solids and wonky/free-pieced blocks.

I believe I shared the fun of trying to make this work - I tried two different patterns before I found one that worked to my liking and turned out the correct size (a block that is 5 3/8" unfinished is going to make trouble for everyone else!)...

The one on the right is the winner!

But those wonky blocks sure can be wasteful!  (Then again, so can paper piecing, but I don't have any photos of that nonsense!) 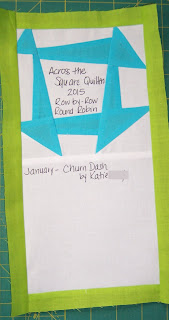 And I made lemonade out of lemons with the first block - it's a label!  I included this in my box of fabrics and asked everyone to add their name and block.  It's nice to have it all written in their hand and I know many folks don't like to sign their blocks.  This was a little bit easier way to get something almost the same accomplished.

What did I get back? 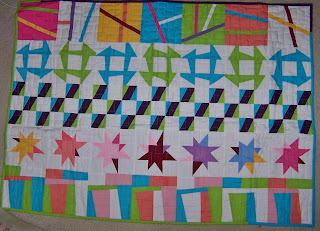 I love it!  I had it quilted and ready for our show in March of last year well before it was needed.  We actually had a month after we got our own boxes back before the big reveal.  I was the only one with mine completely done.  I have only seen Mary Jean's finished from my group.  There was another group of five and they all had at least their tops hanging in our quilt show last year, so that was fun to see, but I was kinda disappointed in my group.  I wish they'd all been finished because there were rows I never got to see - the boxes were kept closed when exchanged, so no one knew what was in them.

But I had a lot of positive comments about mine.  It was a stretch for everyone in my group, but they all said they enjoyed it.  I'm not sure most of them would do it again, but much like I did for their rows, they tried something new and learned something.

Today I did a little quilty sewing.

First, I ran to a quilt shop looking for fabric with bricks on it.  I made my hubby drive because I have a nasty sinus infection and between the cold medicine, the bubble-head feeling of the congestion and the left side of my face running like a faucet and needing frequent Kleenex breaks, I didn't think driving 30 miles was a good choice.

Thank goodness they had what I wanted... 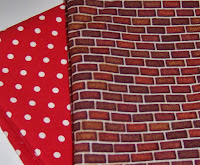 My guild is starting a block exchange project this Thursday.  It's kinda like the row exchange except you make only one block.  I'll share more when I get my block together and have shared the plan with my guild on Thursday.  There are a few who read this and I want my box to be just as much of a surprise as theirs will be!

Then I came home and decided that this month's UFO is not going to quilt itself.  I could sit on the couch and feel sorry for myself, or I could stuff the pouch pocket on my hoodie sweatshirt with Kleenex and make the best of it.

I had looked through books and photos on the internet for ideas how to quilt this and actually had a pretty final plan, but in a congested haze yesterday, I figured out exactly the perfect motif.  I'll share more when the full reveal when it's finished, but here it is on the longarm - getting ready! 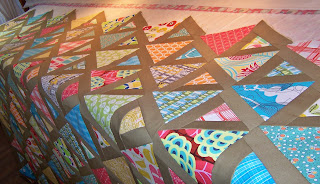 Right now the quilt has been trimmed to rectangular (not wonky as the edges here show, but I thought quilting first made the most sense to end up with a square, er, rectangular, quilt) and the binding machine sewn down.  I have to do the hand-sewing, but I'm hoping this faucet-face will be better soon because looking down?  Worse!

I wonder if the hubby will make me tacos for dinner?
(if not, you'll find me in the kitchen just shortly...)

The row by row exchange looks like fun! There are some great blocks in there. Your quilt is so pretty and bright. Hope the germs bugging you leave soon and you feel better fast!

One thing for sure, you have more patience and detemination than I have going on right now! Your blocks, make that rows, all look great! Glad you had fun with it all. ---"Love"

You've demonstrated so well the challenge of a row quilts and having to think outside the box, design outside your comfort zone. From the photos you've posted I think you've done really well to make a row that works for the other quilter. Your row quilt looks terrific. Love the brights. Hope you are feeling better soon and looking forward to seeing this UFO's quilting pattern.