For those of you who aren't aware, this is a challenge inspired by the television show Project Runway.  Only with quilts!  We are given prompts every other Sunday and have just one week to complete a quilt.  Not a top, mind you, a whole quilt!  I participated last year and had a blast.  (My hubby might tell you of the neglect he suffered, but do not mind him.  He exaggerates something terrible.  Most meals were provided during the challenge weeks...)

This Sunday the first challenge prompt was posted: Notably Numeric.

Anything to do with numbers - in any way we could justify it - is fair game.  Wide open, right?  Kinda terrifying, but since this isn't my first year, I was a little more prepared.

I had a few ideas, but Pinterest is always a good place to expand your ideas and this time it did not disappoint.  The second quilt here was my inspiration, but as it seems to be, this was actually a single piece of fabric, quilted nicely.

Not to fear!  I have graph paper! 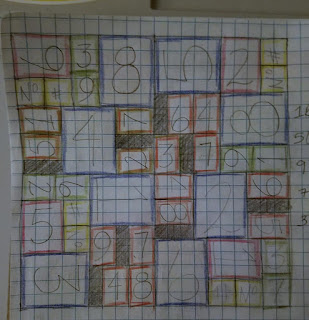 Poorly lit, as I was working late Monday night on this (remember I was gone all weekend and the hubby wanted to spend some time with me before he left for (second shift) work Monday night), but you get the idea.

I decided that each number would be one color, making it fairly evenly distributed with four of each number on the quilt. 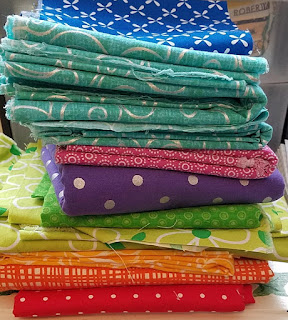 Next up was the numbers.  No way am I going to be able to draw those nicely, so off to the computer.  I found a font I liked and blew it up to like 600% to get the right size for the largest numbers.  Of course, my printer (the most temperamental printer on earth) threw a tizzy fit and I only had to print the pages about 4 times each, plus two rounds of print head cleaning and then, when it FINALLY started working nicely, jammed.  ARGH!  But, I successfully printed what I needed and only made up a few new curse words.

I then dug through my Closet of Nonsense (much less organized than the Closet of Shame) and found three (THREE!) different kinds of fusible stuff.  Tested them all and chose the least stiff of the three.  It also looked to be the most of the three.  It was not.  Less than halfway through, I realized it was the instructions rolled up in the middle.  Hmmm...I could go buy more?  I could use the other stuff?

But what if I just glue baste them down and then go over them with the longarm?  That will work!

To the tracing (again) on freezer paper for templates and cutting!  I am so happy with myself for purchasing that light box at a garage sale this past summer.  Brilliant! 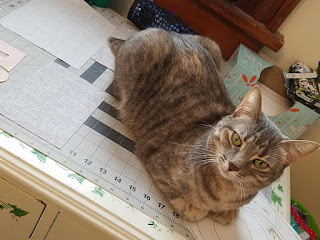 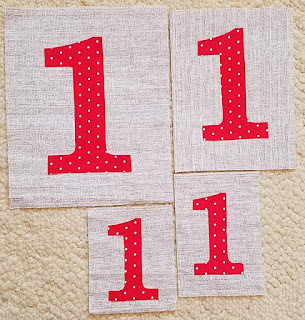 The glue held better than I anticipated (just a touch of Elmer's school glue, set with a hot, dry iron) and these seemed to go pretty quickly. 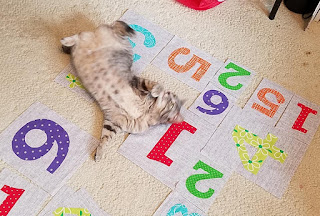 Gabby continued to help, of course.  Here you see her re-furring the floor I vacuumed the previous day.  Along with the quilt blocks I had foolishly put on the design floor cat's place. 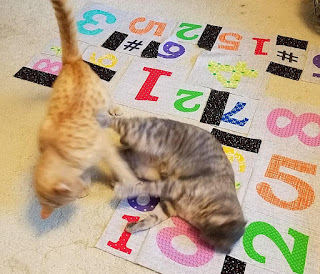 Soon after, Finn, who is learning to cat from his sister, had to check things out and they decided that my design floor was now a cat WWE ring.  Amazingly they didn't scramble too many things, but they sure did have a fun time.  (I'm very glad that these two are getting along this well in such a short time, so I hesitate to break anything up that seems playful and not hurtful.)

Finally all the blocks were done... 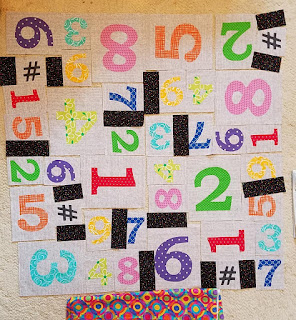 While working on cutting and gluing these down, it occurred to me how much work longarming in those tiny numbers could be and how stiff the quilt could become (I envisioned this as a baby quilt from the start).  And I struggle to echo well with that large machine.  I've been working on it, but these require more precision than I can muster at this point.  (And honestly, the harder I try, the worse the echoing gets!)  So I decided to straight stitch each one very close to the edge in matching thread (which, by some miracle I had every single color on hand!) on my domestic machine.  This took a while, but I cranked up the tunes and dug in.  I got better and faster and then, 4 numbers from the end, remembered I had a CLEAR foot.  THAT would have been a wonderful revelation about 32 numbers earlier!  (Less brilliant...)

And then I had to figure out if the back was wide enough.  The quilt is 40"x40" and you all know how fabric manufacturers are making what used to be a 44" wide piece of fabric smaller and smaller each year...

It was not, so I had to piece it.  And lay it out to make sure if I had to load it one way or another on the longarm, I knew which way that would be. 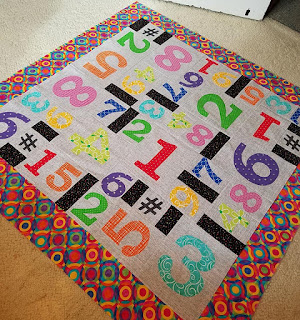 Just about square perfect!  Back to brilliant!

And, up until this point I was thinking a darker binding, but seeing this made me second-guess it.  (If I had enough fabric, I might have even added a border of this, but I did not and was not going to go buy more and fabricate a reason to run my washing machine a THIRD time for fabric for this quilt this week!) 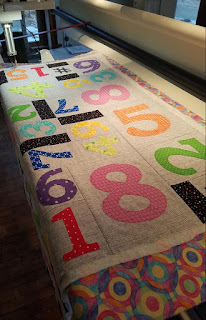 Once I switched out the mostly-empty bobbin of thread that decided it did NOT want to come out to play (resulting in some unsewing), the tension was perfect and the quilting went fast.  I decided to just do a large stipple (something I haven't done in about 100 quilts - I think quilt 1 and 2 had it and I haven't used it since?!) because this really didn't need more.  Swirls would have been too much and many of the other overall designs I like are directional.  And, if you haven't noticed yet, this quilt is not exactly directional...

I decided, in the absence of a colorful border, a colorful binding (made from backing leftovers!) would be a good choice.  The dark still haunts me, but with the quilt being so bright, I just hope those black with bright dots in there don't stand out too badly to whomever this goes to. 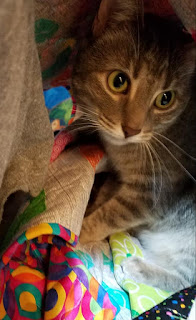 As I turned the last corner and started to sigh with relief that I was so close to done, Gabby reappeared to help.  She burrowed right under.  So much for the lint roller I used to get the cat hair off when it was on the longarm...

Quick, outside!  Get a daylight photo before it gets any darker.  It was dusky out, but I think this turned out well.  No photo editing (other than cropping) was even done! 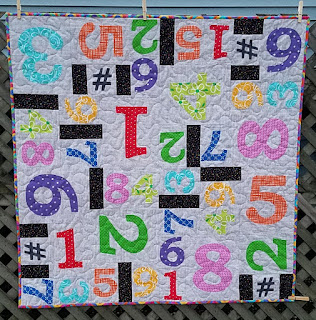 And there you have it.  I haven't named it, but it is done.

Now don't think the kitties were entirely neglected.  On my way out of work Tuesday night, I picked them up a new toy. 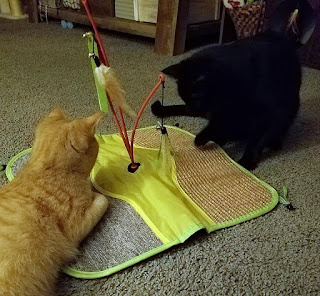 Actually, they also got more plastic spring toys because Finn had figured out where I hid the extras and helped himself and now they are ALL missing.

But all the cats seem to like this toy.  Gabby has worked at destroying the little do-bobbers that are attached at the corners, while Freddie has decided those upright stick-things are great for brushing teeth.  Finn mostly just rolls on it like it is infused with catnip.  Maybe it is?  Anyways, they've been having fun with it.  Between sessions of "helping".  I prefer Freddie's help best - he sits in the comfy chair next to the WWE cat ring and looks disdainfully at all of our moronic doings.  He will tolerate some head scritches, but only for a short period of time and then he stalks off to find a more suitable (hidden) spot to practice his condescension.  (At nearly 15 months, he has mastered catting like no other cat I have ever been owned by.  Except when he sleeps upside down in the middle of the floor in the back room.  Then he is perhaps channeling a little dog because he will stick around for the inevitable belly rub and doesn't try to chew off your arm!)

And now it is time to go find something else to do.  Perhaps some Monty Python?

Way to adapt and overcome to get the quilt you wanted!! The reason you are having so much trouble with echo quilting is you are tensing up your arms and shoulders. That makes it hard to keep a smooth line. Try to relax before you start, roll your shoulders, stretch your back and arms, take a deep breath and let it all out before you go for it. When it starts to go wonky, repeat the relaxation steps. I also find that quilting with music going on makes it easier to "dance" with my machine!! Your quilt turned out great!!

Have I ever told you that you are a glutton for punishment? Yikes! One week per month to be dedicated to the challenge quilt? I wouldn't even be able to do one a year! The numbers quilt turned out great though and I will look forward to your future creations! Your description of the cats is so funny!

This is fantastic!! I absolutely love it!! Thanks for giving all the ups and downs of the process! A colorful and wonderful addition (pun intended!) to the Project Quilting group!

I love all the work those cats put into this 😉 lol
Such a fun happy little quilt!

Oh I really like this one. Graph Paper is my favorite "tool" for quilt making. I gotta give this one a go for a donation quilt for kids...

LOVE your numbers quilt! And your fur baby helpers - makes me want to get some of my own - almost - ;))

Sew Much For Free Time said...

This is wonderful! And impressive for less than a week! I remember how amazing your entries were last year, and I'm looking forward to seeing what you create this year!

I love what you created! It is so colorful and happy. It would be a great quilt for a child to play with the numbers! It's amazing how fast you got it designed and made. Love your kitty helpers, too. They are so cute!

Thanks for sharing your design process. Someone will be very happy with this quilt. Those cats! If hubby didn't have breathing problems around cats, your kitties would definitely make me head to the nearest shelter and bring one or two home.

I love your bright, cheery number quilt. That was a kind of large undertaking for the time frame!

Oh I didn’t realize that Project Quilting was like its counterpart where we work in teams. No wonder you did such a stellar job so quickly with such active, feisty team mates.

Very nice finished piece. I enjoyed all of your design choices along the way.

I can completely relate to printer whoas. I was ready to take a baseball bat to mine last week. Way to persevere and create a really fun quilt. Although I am still curious to learn more about your Closet of Nonsense and Closet of Shame!!

Wow! You had quite the adventure to get your quilt done! it turned out BEAUTIFULLY though and I'm so happy that you're playing along again this season!