Or, as my cousin said on facebook this morning, the day before 50% off chocolate day.  I like her version. 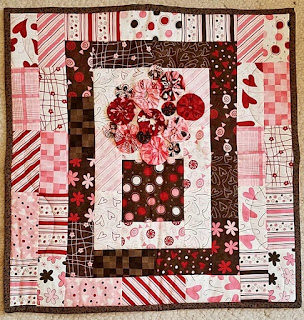 This is a little wall-hanging I made years ago.  (Little as in about 18" square.)  I think it was kind of a kit in that it took a charm pack and pattern, but otherwise I don't remember much about it.  It hides in my Closet of Nonsense (you can see the fold lines) because I am terrible about remembering to hang up holiday stuff.  Also, I am terrible about remembering to take it down.  So if I put it up, there is a chance it will hang there until next Christmas.

A week ago, I was bad and ordered a bunch of stuff online.  I bought the cats some new stuff (a couple pieces of carpet-like material called a "ripple rug" and a laser that works by itself - both are highly recommended by all three cats!), but also a kit for the princess castle quilt and a sweatshirt for myself.  All of it has arrived...the cat stuff is less than tidy, so we'll just let you imagine that mess. 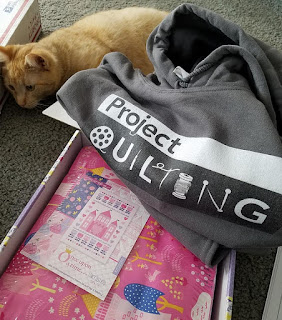 Finn was checking out the box.  Freddie came by shortly after and chewed on the hoodie to make sure it was of good quality.  (No photos - he was adamant about that and made sure to put his worst side forward so all photos looked ridiculous enough that I will not share them.)

These both came while I was at work yesterday, so it was a fun way to arrive home after a snowstorm.  (That was really not as bad as they had predicted, though the cold that followed was accurate.)  The hoodie came from Zazzle, via Project Quilting.  The kit is from an etsy store and I got the only one they had.

In other news, I decided that once the stars quilt was together, I was going to use this (blurry) fat quarter bundle.

I think it's been in my stash for about 20 years.  I vaguely remember getting it from a friend of my mom's at a quilt retreat.  It might have been a door prize?  And though it's not bad, it's kinda not me either, so it just hung out.

And then I had a pattern in mind to use.

But that just didn't want to work.  So I moved on. 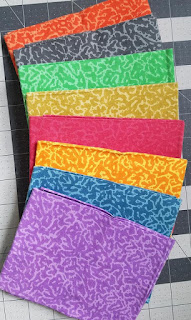 The fabrics are pretty, though that grey seems to be the oddball.  I went looking for a fat quarter friendly pattern.  I own few books of that nature and seem to have trouble finding quilts that don't use a whole bundle of like 40 fat quarters.  Then I found this.  It takes exactly eight fat quarters.

I had to buy a little yardage for background (which also has been used for binding), but it was worth it to get this out of my stash!

But, as I was pressing and cutting these, a couple were closer to 17" wide, rather than 18".  This caused some trouble, but I made it work and my quilt is an inch or two smaller than the original.

I also found some markings on two of the fabrics: 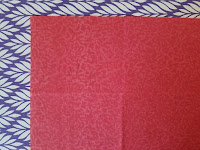 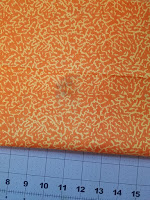 They are more obvious in person, but I was discouraged.  The pink was close enough to the selvedge that I was able to work around it.  The orange, however, required some piecing to get it out. 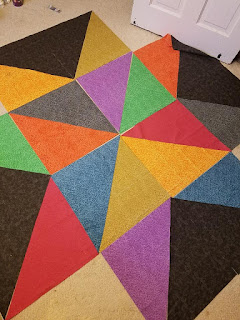 I figured out a layout on the floor in my sewing room (obviously it wasn't quite big enough), but waited to cut the four corner squares until I knew for sure what size the half square triangles would trim to.

And then I lost motivation.  All those things working against me just sucked my quilty mojo right out of me.  (Also, the attempt to get my hair cut that failed and the wanting to go to recycling while I was out and about yesterday was thwarted by their closing due to the storm that wasn't so bad after all.)

So I decided to read. (Ignoring the quilt that I quilted on Monday that still needs the hand-sewing portion of binding sewn down.)

So I spent some time trying to find it as a free e-book, which failed.  But I did figure out that my local library has a copy.  Today I went to the library and got a new library card (because they expire?!) and requested a hold on the book when it comes back - it had been checked out just a few days ago, the nice librarian let me know.  Ah well, I can wait and just start a new book in the meantime.  I have plenty.

I also got my hair cut today.

So I figured it was going to be a better day and decided to make myself sew those pieces together.  They're large and needed trimming and it was not my first choice, but if I'm going to have a clean slate of quilting stuff for the Project Quilting prompt on Sunday, this needs to be done. 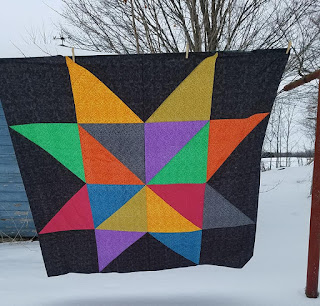 So I finished the top.  And made the binding.

It finished about 67x67, which is respectable for a charity quilt.

And those fat quarters are gone.

Can you see where I pieced the yellow-orange?  I bet you can't!

Also, you probably can't see where some of the fabrics had faded due to sun.  They were mostly in a closet, but still had some fading.  Once it's quilted, I don't think anyone is going to notice any of these things.

I'll get it quilted eventually.

Back to the banana bread.  (I swear my hubby refuses to eat the last three bananas on purpose so he can have bread!)

Sounds like your day started out about as upsetting as mine do quite often. Glad you got the handle on it in spite of yourself. That is indeed one big star! I think I can see the pieced top left hand star, twice out near the point. I had to enlarge the photo twice, so I don't think it will ever be noticed. Nor do I think anyone will care if they do notice. They will just be grateful to be the recipient of the quilt. Go easy on your husband. I purposely buy three bananas and let them ripen to make bread too. In fact, I think my bananas are probably be ready to make the bread tomorrow! Thanks for that reminder. ---"Love"

Oops! I hit Publish too soon again. I love your little quilt. The brown with the flowers reminds of chocolate candy, and who doesn't love that on Valentine's day? ---"Love"

For some reason, when you hung the star quilt top out for the photo op, I thought it was quilted already. Banana bread does sound good. :) I had to laugh about your holiday 'gear'... I have a St Patty's day quilted wall hanging that's been hanging next to the microwave for YEARS.. and I left my gnome wall hanging up after Christmas - I figured they were good for winter in general - let's see if I remember to take them down when Spring finally gets here.

Cute Valentine quilt! The star quilt is great! Great big too! I like the idea of making something like that. Seems like it would go together fast. BTW, I think I will go make some banana bread as I have 3 1/2 ripe bananas.

I like your cousin's version, too - it also works for Easter! Good job on using up those fat quarters - giant blocks is a great way to do it - now, why didn't I think of that? And I'm like your hubby - sometimes I buy bananas and forget about them on purpose so I can make banana bread - ;))

The little quilt is perfect for Valentines day, enjoy it! Cute hoodie and the pink castle fabric is pretty. That will be a fun quilt to make. The fat quarter of fabrics is nice and I love the big star. I like the color on the dark background, the star really pops. Mmmm banana bread sounds so good!