Today was a smaller quilt, but also one that was made a bit ago with the intention of donating it as part of the Hands 2 Help 2020 effort. I blogged about its start here and I guess it wasn't all THAT long ago.  Seems like longer...

But since this is a finished quilt post, I'll review some...

I made a quilt for my friend Jennica - her second baby was on the way.  But I had a bunch of left over half square triangles... 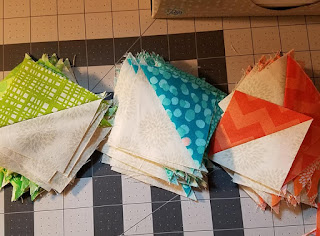 ...and I am trying hard to not let stuff like this languish any more.  (Please don't look in my sewing room.  I AM trying!  And succeeding to an extent...)

I sewed them up into "butterflies" and layed them out on the design floor... 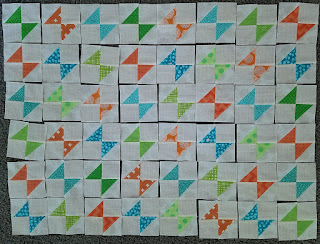 ...and then realized just a few more blocks would give me a square layout.  So I made those and sewed them up.

They looked pretty pale, so I raided my 2.5" square bin (which was sadly lacking in all three colors) and added a bright border. 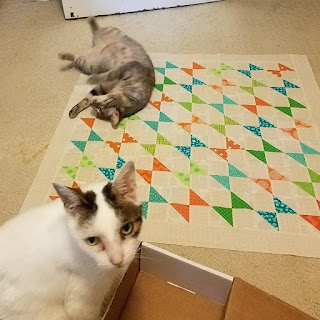 (Oops...this photo is before the bright border.  But it is one of my favorite photos ever.  Gabby is a goofball when quilts come out and Emma...if she could roll her eyes, I think she would!)

I pieced a back with leftovers from another quilt and added it to the Rack of Shame (that is 3 quilts lighter now!).  Today I decided it was time.  It's smaller, but that allowed time for photographs and blogging and some other projects later tonight!

I knew it was going to be close - the back was just barely bigger enough (something I am mad at myself for doing to me, my longarmer!), so I had to work something out to keep the machine from getting hung up on my fancy Red Snapper quilt-back-holder-to-the-leader thingies.

There is actually a plexiglass thing that fits over it, but these CD cases and some masking tape work well, too.  (I'm gonna ask for the fancy thing for Christmas!)  If it's not obvious, where the CD cases are taped, there is a drop-off from the needle plate area.  Normally you can load a quilt and leave enough back fabric at the top to avoid the drop-off from catching as you try to come back.  Not this time.  (Does that make ANY sense?!)  But I've done this before.  Not my favorite, but easier than sewing on extra fabric and then removing it later.  And I'm kinda lazy.

So I got busy quilting...and before I knew it, I was done.  So my only on-the-longarm photo I have was taken after I finished quilting! 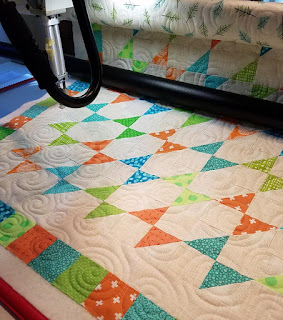 Yep, swirls.  I was going to do something fancier, but I had so little extra on the sides also that I needed to work some extra hands-on magic with that and decided something I could do in my sleep was a better choice so I could use my brain power to focus on not sewing myself to the quilt.

(I did not sew myself to the quilt.) 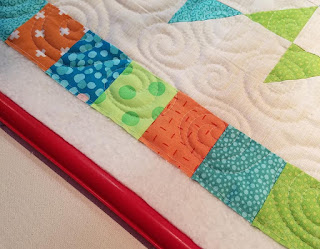 See that red thing?  That's the Red Snapper.  See how close it is to the edge of the quilt?  Remember, those are 2.5" (unfinished) squares you're looking at there.  And there is only about 3/4" of fabric in there.  I skimped and I made it.

Public service announcement: DO NOT do this to your longarmer.  They will hate you.  They will cringe at the sight of you walking up to their place of business.  They may let your phone calls go to voicemail.  This is terrible and stressful and not nice.  Buy that extra half yard of fabric.  Don't be like me.  I hate me when I'm my longarmer and I do crap like this.

Anyways, back to the quilt.

I had made the binding for this one when I finished the top (trying to be good about that, but it doesn't always happen...), so it was a quick trip up to the sewing room to put the walking foot BACK on.  (It's been on and off about 300 times this week, I swear!)

And then back down for a comfy spot on the couch and another Gilmore Girls marathon while I sew down binding.  (Remember, I've seen them all before, so I don't have to watch-watch to know what's going on.  If you put something on television that I haven't seen - and want to see - I will not sew a stitch!)

A few episodes later, I was done.  And the wind is light.  And it's not raining.  So outside I traipsed with my clothespins and camera and got a photo! 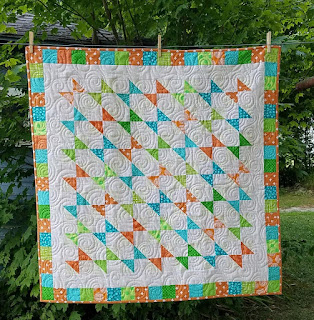 It's just 36x36", so small, but a good donation quilt for a baby.  And while someone may find a pattern that resembles it, I just made it up as I went along. 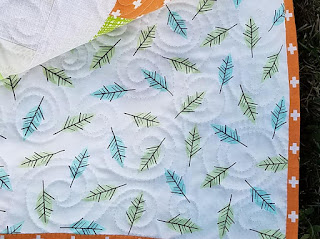 Pretty perfect with the colors, right?  (Well, no orange, but the other two...)

So that is quilt #5 finished this week.  I have two more days and have picked out the quilt for tomorrow.  Now I just have to figure out what motif to use.  The original has straight lines 1/4" in from each seam.  I can do better than that.  So tonight I will think.  As I deconstruct Patchwork City.  After seeing photos of the whole quilt, I realized that I failed to make sure things were lined up in the absence of cornerstones.  And it's going to drive me nuts.  And I put all that work in, so I'm going to fix it.

I'm sure the cats won't mind me sitting on the couch, right?  They've been pretty okay with it all week when I've been doing binding, though it's not exactly snuggle-under-the-quilt weather.  (Probably better - binding is harder with help...though I've had some...)

I've also been making a block a day for the 100 blocks challenge.  Just two to share today since I'm blogging sooner than usual! 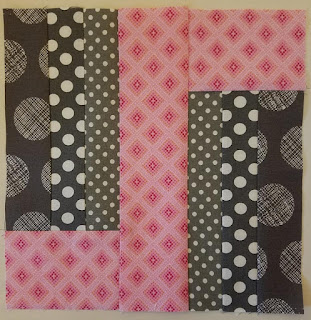 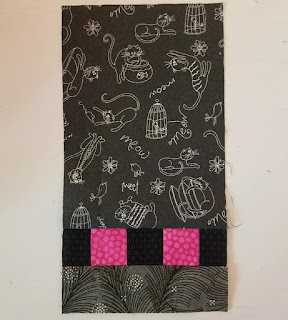 Off to figure out which seams need to come out and deconstruct a quilt.  Technically, this might be procrastinating having to quilt it, but whatever.

I'm SO glad you didn't sew yourself to your quilt - LOL! Your butterfly quilt REALLY cut it close - good thing you are your own longarmer - but even so - that was a very clever work-around and it turned out cute. I still love those black and pink blocks - they are so pretty - and "deconstructing" sounds so much better than "unsewing" - I need to remember that. Goofball Gabby and Emma with the "eyeroll" look - too funny - ;))

I think that quilt just might be my favorite of all the ones I've seen you do.

Come on; you know the proper word for deconstructing is "Ripping"! Go ahead admit it; I did some of it today! The butterfly quilt is very pretty and will make a special baby quilt for some little one. Your new blocks are very nice too. Wish I had as much energy as you! ---"Love"

The border for the butterflies was perfect and such good thinking! I'm with you on needing the TV show to be something I've seen before - my go to is Great British Baking Show, I just have to pay attention at the judging. Thanks for the double cat picture! Between Gabby's antics and Emma's attitude it's fantastic. I had a cat that would sit on the other side of my sewing machine and stare at me through the harp space.