I know I have a bunch of quilts I've made that predate blogging (or at least predate this blog - the old one is long gone - long story short), so I'm going to try to work on sharing those and jump on the TBT bandwagon.  Along with those I've made since I started blogging, but didn't have it together enough to write the post.

This quilt was given to my hubby's oldest (longest?) friend and his new wife as a wedding gift.  Randy and my hubby met at work.  They both still work there.  Both the guys met their wives at work, neither Jennifer nor I still work there.

But after a long, rather difficult period of dating and engagement, the couple sailed to Hawaii and got married on the main island by the ship captain (as planned).  We watched the couple struggle early in their relationship, but looking back, I think a lot was just the two of them growing up and growing into each other.  They're still together, two kids strong, and happy.  So I guess all they went through was for the good.

I don't remember discussing the quilt with Jennifer, but I have an old scrapbook that tells me she requested green to match their bedroom.  While I know she's the type to repaint her house about every year, and I'm pretty sure the couple of houses they've owned since the origin of the quilt haven't all had green bedrooms, it's a pretty safe, neutral-ish kind of color for a quilt.

Jennifer and Randy love to do outdoor stuff.  I see photos of them now with their kids camping and fishing - all of them in hip waders (and the kids are elementary school age...I think!) - having a blast.  So I decided on a maple leaf pattern for the quilt.  I didn't even need a pattern, just math! 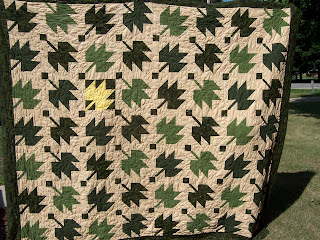 This was LONG before my longarm, but I don't remember who quilted it.  I also have no idea how large it is, but I think their bed at the time was a queen-size.  I do know some of the fabrics still linger in my stash!

After they returned from their trip, I gave them this quilt in October of 2007.  I think it was probably a few months late, but I wasn't quite the speedy quilter I've become today.

Jennifer loved it.  Randy is fairly quiet, so he probably just nodded in acknowledgement that he'd been given something.  But she asked my why that one block was yellow.  Had I made a mistake?  I thought I was being creative and fun, but I think she's a little more OCD than me, so it probably was driving her nuts!  (I can see that, and if I hadn't intended it being there, I'd probably ask, too!)

Since this quilt, I have given two quilts to their daughter, Makayla (one of them is posted here) and one to their son, Denis, posted about here.  I'll have to add Makayla's baby quilt to the TBT list...

And now it's time to go embroider some arms on snowmen...

Happy quilting,
Katie
Posted by Katie at 9:12 AM

I like the idea of TBT for quilts... I probably won't do it, but I'll enjoy reading yours ( and anyone else's). I did a large maple leaf quilt ( the leaves were large, the quilt wasn't) when I belonged to a group of crafters who met up once a year for several years... twice in Niagara Falls Canada, once in another town near lake Ontario, three times in southeastern Pa. and once here in Charlotte. We did gift exchanges.. where we would make something and we would draw numbers or names to see who would receive each gift. A gal from Canada 'won' the maple leaf quilt that I did... I know I have a pic of it SOMEWHERE, but it was so long ago that it's on a disc - not a cd; I should look to see if I can find it.
Anyway, please keep doing TBTs... it's fun. :)

Good idea to show some quilts from the past. BTW, what does TBT mean? I don't know if I have any quilt not shown on my blog,