So I last left you with a photo of the layout for the UFO for the month. It's kind of a grey day out there today, but it's not snowing.  It's not raining.  And we're not underwater like so much of the surrounding area, due to melting snow and rain.  Happens every spring, but this year it's worse than average.  (I'm so thankful to the farmer who built my house over 100 years ago who chose higher ground!)

So anyways, I got an outside photo!  It's not even THAT cold out today, but that's probably just because my body has adjusted to winter.  Finally.  You know, like 3 months too late.

It's sideways, but my clothesline is only so tall.  And really, would you want it to be tall enough for a quilt, but then you couldn't reach it?  Nah.

This went together better than I expected.  I had picked up everything carefully enough from the design floor that, with a few references to the pattern diagram, was able to get it all together easily.  Even all the directional fabrics are going the same direction.  At least I think they are...

I have an idea how to quilt this, but I'm going to hold off for now.  I don't have a back yet, though that's not really an issue.  (I mean, a trip to the quilt shop?  Not exactly world-ending!)  What I'm really waiting for is a month when the Rainbow Scrap Challenge calls a color I'm not going to be doing.  That month I hope to play catch-up with the quilts waiting for their turn on the longarm.  (Hey, if I'm spending the better part of 2 weekends a month on those silly blocks, I can probably spend at least two days on the longarm, right?  So maybe 2 quilts quilted?)

But I'm also going to plug away at Philip's quilt.  This one has a deadline.

This week I took myself up to the sewing room most evenings and tried to make at least a few blocks.  An hour could produce 7-10 blocks, depending on how distracted I got with other stuff.  But once I got going, they did go fast, even if mass-production wasn't possible.

My efforts were not in vain - this morning I completed the last 5 of 56 total blocks for the quilt!  The bin of parts is empty!

Downstairs with the stack of blocks for a layout... 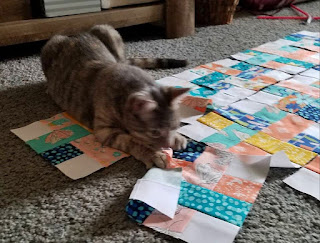 This is how we do things at my house.  If it wasn't Gabby/Spazarella, it would be one of the other cats.  Some of them, in their life experiences, have learned to be more sneaky.  Gabby fears nothing.  Well, okay, she's afraid of humans when she doesn't want something from them, but she WAS feral when we brought her home in early September.  Now she's just crazy.  And cute.  Don't forget cute.  (In case you hadn't noticed it in the photo, right?)

With a little perseverance, a little shuffling and rotating, I have a layout! 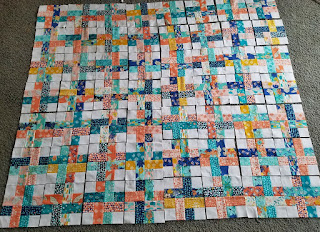 One must work quickly at this point.  There is a constant danger of "helping."  So all the rows are labelled, picked up carefully, and have been returned to the sewing room.  But really, this is so scrappy, it wasn't too hard to get stuff arranged.  Mostly just making sure same/similar fabrics weren't touching and the yellow/golds weren't all in one place.

Now comes the chore of sashings, cornerstones and long seams.  I also don't have a border fabric.  I think I planned originally to see how it came together and decide on a border fabric then.  So I guess I'll be purchasing some fabric in the near future.  (Though the wedding isn't until June...so I can probably put that off some...but if a non-color month comes up, this will probably be first on the longarm list...decisions, decisions...)

The biggest thing I've learned/re-learned with this project?  I don't like precuts.  The edges were all ruffly on these strips.  Even after a good steamy pressing.  (No starch, please.)  When you roll stuff up and then mash the middles together with a rubber band, they do that.  But it was the only way to easily get all those fabrics, so I made it work.  And it's probably worse in my head than in reality.

I'm eager to find out the UFO number for next month.  The color?  Well, I'm still not sold on those blocks, but am going to keep going and hope the finished quilt isn't an ugly disaster.

Great quilt top done. It is hard to get a good photo outside on a winter day. We get wind and sunshine if it is warmer. Or crazy cold and sunshine.

Both patterns are pretty, but I doubt I'd ever get the first one figured out. i do really like the last one! You are staying busy! Me too; just haven't got to quilt yet! Maybe soon. ---"Love"

Both are so colorful and the designs are great. One top done and the other almost there, these are wonderful quilts! Your kitties are always so cute helping!

Both patterns are beautiful. I had to take a photo inside the house, since it was snowing outside. I never thought to use my clothes line, but I will now!

Love both of your quilts. Great job on moving them forward.

Plus Kitties looks amazing! Apparently we are getting the big freeze here this year. You never know, it might even snow in Sydney! I think it's rather nice to have kitty helpers and Phillip's quilt pack a real punch of colour.