mini challenge and other stuff

I left you last with the mini challenge quilt needing a LOT more quilting.  At least that's how I saw it... 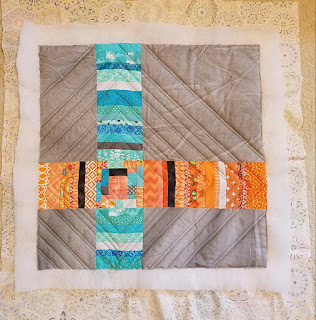 I knew I wanted to do different motifs between many of the wider lines, but wanted to do something extra special in the wide open corner in the upper right.  I quickly found some inspiration in my Instagram feed from freebirdquiltingdesigns and winged it from there.

Scary quilting, but if this is going to be properly done as a challenge, I'd better up my game, right? 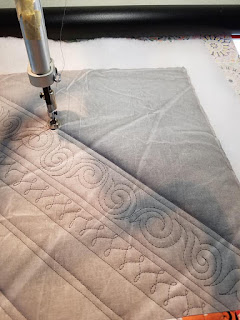 A few sections done in fairly simple, familiar, motifs and then it was the "big corner"...a few deep breaths and some "you can do this" talk to myself and I went for it! 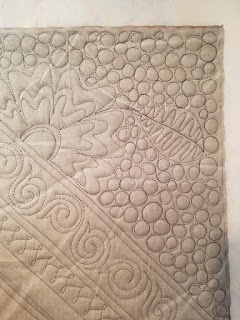 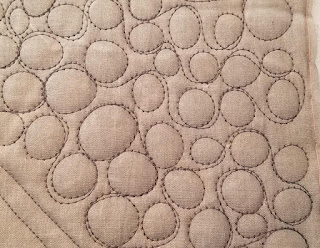 Now don't you go telling me they're not a thing.  They ARE NOW.

Once that was done (and I am pretty proud of that flower - my first time - and that leaf that I just winged in there at the last second), it was on to the remainder of the quilt.  I worked my way towards the center, and like the work on my domestic machine, that meant buried threads instead of sewing off the edge.  But it also meant fewer motifs per section (faster) and I didn't have to figure out where to pause stitching to roll the quilt a few inches one way or another to finish without completely stopping and tying off threads! 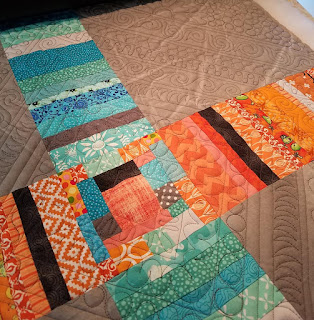 And before I knew it, I was done!

I wanted to try to do a faced binding with this, but at the very edge, on one side, the orange got a little puckery.  Which meant I had to hide that with real binding.  So faced binding will be a challenge for another day.

But I did figure out how to match the binding to the top!

What did I put on the back? 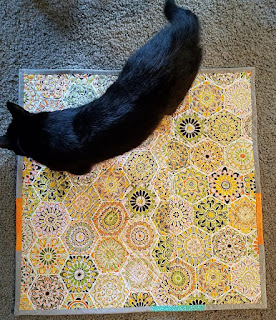 Just the busiest scrap I could find.  And no, I didn't even try to match up the pattern where I pieced it.  The pieces I have are left over from the back of another quilt and getting small.  Finding two pieces that would actually match up and not losing my eyesight trying to do so...well...I'd rather be able to see.  And it's the back. 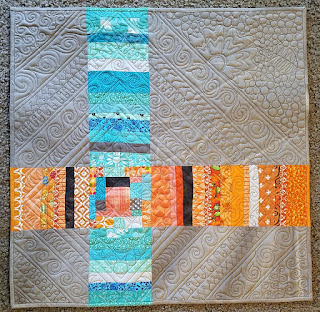 I have yet to send in the photo for entry.  I was going to do that before I wrote this, but got stuck when the instructions said to provide a sentence or two about the quilt.  I don't think "hey, I tried new things" would be a good idea.  Also, explaining my new quilt motif might tip them off to look more closely at my work.  (Not a good idea since it's far from perfect!)  And "pick me! pick me!" might seem a little juvenile.

I have until 5pm Tuesday.

(But I would like to get it done today.)

Yesterday I had the day off and the quilt guild had their sew-in at the library, so I got to go!  Only two other members attended, but we had fun.  We went to the local outdoor barbecue "food truck" (they do have an actual building, but it's an old gas station, so basically a small room with a window where you pay and they have refrigerators - all the cooking stuff is outside!) and I got some chicken and black bean chimis... 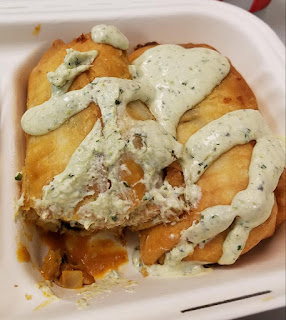 Yummy!  I love this place.  They're only open Friday and Saturdays during the summer.  Unless they're not.  (Like Memorial Day weekend they'll be closed.)  I love that my friends will eat at these adventurous places with me.  My hubby is Mr. PickyPants, so convincing him to try something new is much harder.  Me?  I'll try anything once!

While at sew-in, I didn't get a lot done...well, not a lot of sewing, that is!  But I managed to get a small batch of tiny stars made.  I've been slacking on these a lot lately, so it felt good to get a batch made. 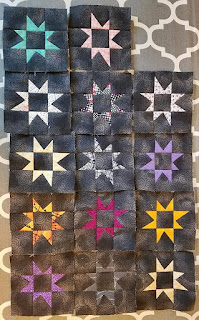 And today, I went to a book store looking for a book to include with the baby quilt.  My friend's sister is throwing the shower and asked that we all include a favorite book from our childhood instead of a card.  I decided a collection of fairy tales would be fun and hopefully unique (not that I didn't enjoy a good Dr. Seuss story or a Shel Silverstein poem, too), and I found one that I'm excited to give.  (The first one I picked up had terrifying illustrations!)

Then my husband let me wander into the fiction section unsupervised... 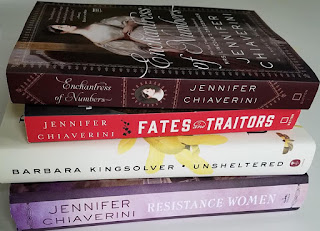 ...probably not his best idea.

I still have not made time to work with my longarm and the variegated thread I bought for my Pantone challenge quilt.  Tomorrow?

But the hubby is off work the next two weeks (he gets a LOT of vacation time and takes most of it during the summer so he can fish...if the weather isn't good for fishing, he leans on me to entertain him)...so we'll see how things go.  But I AM going to finish it and meet the challenge deadline!

Your challenge quilt looks great! You could name it - "Can You Do This? --- I Did!" . Present the others with another challenge of your own! Hope you get some long arm time, but I really don't know how you'll have time to read all those books! ---"Love"

Your challenge quilt looks great... good luck with it! As for the lunch yesterday - as yummy as mine was, I've decided it's just not worth going again. It just didn't agree with my tummy :(. Good luck getting any quilting done this week - hope the weather improves over what we're having right now... well, at least the siren shut up. I know it's a necessary warning, but it can still be sooooo annoying when it's just a warning of the possibility.

Your quilting is wonderful, it really lights up your little quilt! Glad your longarm didn't act up when you needed it. I like your backing fabric, it is pretty and hides a few wobbles. The binding looks good, too. You did a great job matching it up. It is a very pretty quilt! Those tiny stars are still adorable, can't wait to see how you put them all together. Hope hubby has good fishing weather so you can have lots of quilting time!

I like the messy pebbles and Jennifer Chiaverini as well! Thank you for sharing!

I love your messy pebbles. They seem to echo or dance in place :-)
The bright stars gleam beautifully against the dark background.

Your challenge quilt is fabulous, and messy pebbles are a definitely a thing :) I'm impressed with how you matched the binding to the top. What's the secret?