There are 42 blocks in the Very Vintage Christmas book and sampler quilt.  I can't believe that I have 30 of them done already!  When I started the quilt-along, I thought five per week would too many.  It is a lot, but so far, I've been doing okay keeping up.  12 more go to, which I assume means three more weeks and then we'll see how long the blocks hang out before I decide to sew them together...

Blocks this week swung back towards more traditional piecing, which was nice.  But I struggled with matching points (or not losing them) more than I thought I should.  Perhaps I got a bit cocky after all the fussy blocks in past weeks?

Anyways, here they are: 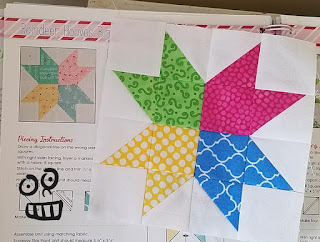 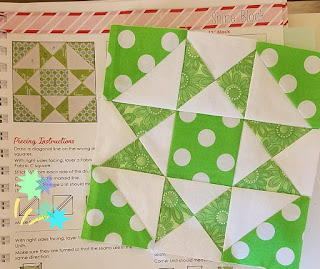 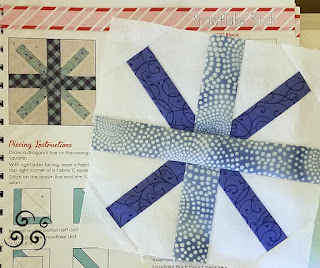 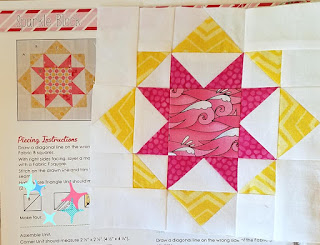 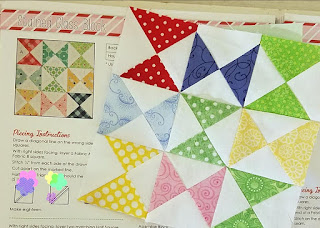 I about lost it on that last one.  It should NOT have been that hard.

But they're finished and that has me happy.

That also leaves me with a few days to spare.  I will probably talk myself into prepping some "seeds" for my Bird Seeds quilt after I finish typing here.  I did well on them for a stretch this summer, but they've fallen off the radar again.  The prep, though it isn't that difficult, is just enough to turn me off doing them.  Wanting the quilt, though, will eventually win that battle.  Eventually.

This week I purchased some fabric for my niece's quilt that I mentioned in the last post.  I went in with plans to do bright, jewel-toned fabric.  I couldn't find a red or a purple or even a good blue that I really liked.  So I brought home what feels like Easter... 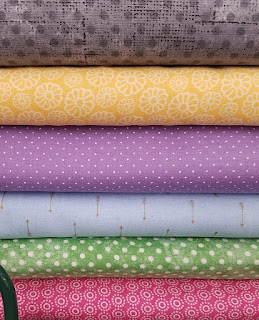 In my original drawing, I used four colors.  There was some corner-touching of colors going on, so I thought I'd add in a fifth color to help that issue (and make the layout maybe easier?).  And then I threw the grey in there, too, just in case.  (I have a grey problem and a dot problem, so if I don't use this in her quilt, I'll use it somewhere else...or just stare lovingly at it for a while...)

But now I'm torn.  I feel like maybe that light blue in the middle is too light.  Maybe it should go and the grey should stay?  Or should another color go?  Keep the grey?  What are your thoughts?

While I was shopping, I also picked up some adorable, tiny buttons for the Christmas quilt.  It needs such embellishments and I might have gone a little crazy...

...there is also a package hiding in there that has stars and hearts.  I may not need them all, but seriously, how could you not buy those tiny flowers?  They're like 1/4" across!  My button box just got a whole lot cuter.  (Previously it mostly held buttons I'd rescued from shirts that were headed to the trash bin.)

In other sewing news, I pulled out a bag of "lost" corners left over from making my sheeps.  Due to block construction, I had only three of each colorway, so pinwheels weren't a good option.  At least not matchy ones.  I thought about making less-matchy ones, but then thought I'd get creative.  I planned to use these as leader-enders since my cute pink pinwheels ran out.

And I made the Ugliest Leader-Ender Project Ever. 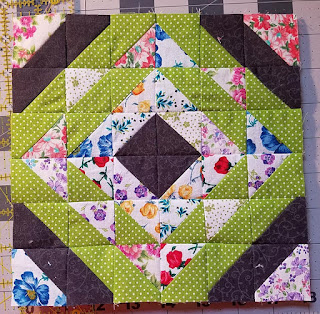 And yes, I see the error.  I'm debating now whether to fix it, throw it out, or what.  It was not the first error, but that other one was found and corrected early.  This one will require much more trouble.

It's about 8 ugly inches square.

How can fabrics that made such a wonderful, amazing, beautiful, loved quilt come together to make THIS?

So that's it for sewing news this week.  But we can't have a post without cats, right?

This week I purchased a new window seat for the cats.  They have one in the bedroom upstairs that is a coveted place for both Lexie and Gabby (my two grey babies).  So I thought, in the wintertime absence of the air conditioner in this window, a new seat downstairs might be nice.  You know, to keep tabs on the squirrels and such. 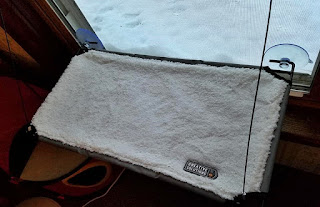 And the cats are afraid of it.

Of course they are. 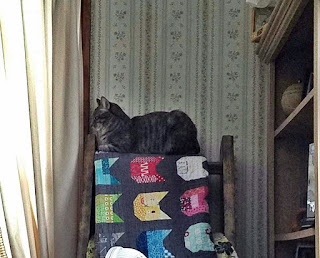 ...of course Gabby prefers the quilt ladder.  Then again, she rarely stays in one place for long, so shortly after this, she was knocking things off the adjacent bookshelf and climbing on top of it to peer down through the window below - the same window that has the new cat seat in it.  Obviously.

Off now to decide what the remainder of the afternoon will hold.  The hubby will be home soon, but other than asking me to make dinner, he's pretty easy going.

It's not ugly... just 'different'. I've thought about those window shelves for our cats, too, but sometimes just looking at a window will make it crack, so it's probably not a good idea.

As always, the Vintage Christmas blocks are adorable! The new fabrics are so pretty. The do look like Easter. You can not have too many DOTS! Those little buttons are so cute, they will be fun to use. Your "ugly" project isn't so bad, the fabrics are cute. You could always make it into a hot pad. Cute kitty photos. Once they get use to the new shelf on the window, they'll like it. Looks like you are having fun with your fabrics!

Your blocks look really pretty! So are your new fabrics! If I had to cut one of the colors, it would be the gray. All the others look like Spring, and yes, Easter. ---"Love"

Busy, busy!! Love your Easter colors My thoughts - keep the grey and the light blue (you "need" a light one) - and toss either the green or the pink But it's your quilt - do what YOU want - ;))

All your vintage blocks lovely and you are happy. That is all that matters, right? Ugly (if you say so) make perfect mug rugs. Thank goodness for easygoing husbands. Looks like the cat recognized the cats in the quilt and gravitated to it.

Your Vintage Christmas blocks are delightful. I especially like the last two in that set. I wouldn't call your leader-ender block ugly. Not at all. Maybe you could fix it and save it to use with any other extra blocks you might have. I love your photo of your kitty on the ladder. Gabby looks like she is studiously ignoring you. She is such a beautiful tiger-grey!

Hi Katie,
I just started following you. I adore your Very Christmas blocks. I went on a rabbit trail to look at your sheep. I really like sheep. My two older brothers raised purebred Hamsphire sheep for 4-H projects. When the younger of the two went off to college, it fell to me to feed the ones that were in the chicken house near our house. I also seemed to be the one who would find one on his/her back and run to turn the sheep over before it died. The rams were not always pleasant and like to butt me. I had a rather large baseball bat that we had used to play wiffle ball. I used it to let them know that it was not appropriate to butt me and we got along fairly well. I noticed that your mother had made a Boy Scout quilt for your dad as he is involved with Boy Scouts now after retirement. My son is an Eagle Scout. He was going through a rough time at the time he earned his Eagle. He had done all the work and told us that he had turned in the paperwork. We called the scoutmaster and learned that was not correct. That was all that he was missing. So, we got the form and the three of us spent the weekend printing the information on the computer and cutting and literally pasting with glue/tape onto the form the information to complete the form. I don't remember ever missing any event of either of my children and when it came to his Eagle ceremony, I was in bed with a migraine headache. I had received so much medication that the doctor could give me no more. After my husband, son, and daughter had left for the ceremony, I tried to get out of bed and get dressed to go and I could not and I knew that I couldn't drive there anyhow. I sure hated to miss his ceremony. He's now glad that we helped him and he has his Eagle Scout. I'm glad that I found your blog from someone else I follow beginning to follow you.
Susan