It's the last challenge for Project Quilting Season 10.  It's been a wild ride where far too many things just seemed to fit.  Like they were meant to be.  Scary in a way, but this last challenge fought me harder than any other, so I suppose it was time...

This challenge is all about chocolate.

And just like all the others, this one can go in SO many directions.

Of course, I tried to look for a science nerd way to do something, but really found nothing.  A few other ideas came about with the help of Pinterest, but nothing really screamed at me.

Until I saw a quilt on Instagram.  That I promise you I will never find again even if I try.  But it was wonky log cabin-ish blocks.  Very modern.  But it reminded me of a box of chocolates.

And I was off!

I pulled red/orange/yellow/pink fabrics for the fillings of these decadent chocolates.  And wonkily surround them with a variety of browns to mimic the dark and milk chocolates you often see in a box.

But this is no ordinary box of chocolates.  This box of chocolates is the kind found in a house where "someone" samples them all...to make sure they aren't ending up with the gross coconut-filled variety! 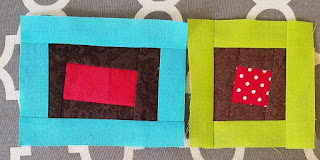 I decided to add a skinny border of bright colors to resemble the little paper cups these treats are found in when in the fancy boxes.

And note the centers are a little wonky because once you've opened that box, they never sit quite as evenly and prettily as they did the first time.  (Thankfully, that doesn't hurt their flavors!)  (Also, the sampler might not have been entirely focused on a perfectly centered bite and instead focused on not getting caught doing so!)

The first two were trials and, after a few adjustments to the plan and copious notes (because apparently I can't remember to read the part that says "finished" and still trimmed them wrong - too big wrong, but still wrong), I was able to mass-produce the remaining chocolates for this rather small box... 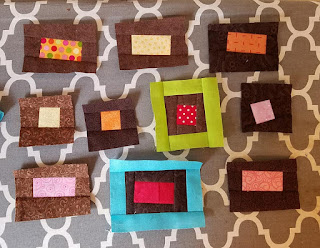 This photo was mostly taken for reference so once the "cups" had been sewn on, I would know where they went back.  Because apparently I needed a lot of orange fillings?  (And I still didn't scatter the different chocolate varieties well...)

The cups step was also not without problems.  That blue there?  From my strings and I thought I had plenty.  I was wrong.  And I had no more.  So...into the stash for a similar blue and ripping that blue off the block a SECOND time (because the first time there was too much chocolate).  Also ripping it off parts of the other blocks for a first time.  UGH!

I layered and quilted in the ditch around the centers and the chocolates and it looked like I had done nothing.  (Maybe more batting should have been employed?  But it was far too late to change that!)  Guess that means my ditch-quilting is good, though, right?

How about a zig-zag stitch to mimic the accordion folds of the cups? 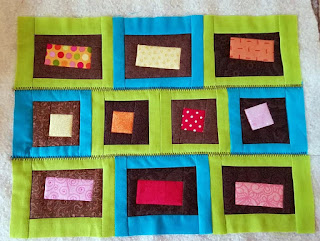 This is as far as I got Monday night.  I wasn't liking it much.  In general, I'm not a fan of fancy stitches on quilts.  (Unless it's a crazy quilt, then fancy it up to your heart's content!)  And this was truly the first time in the year-plus that I've had my current machine that I had done anything but a straight stitch with it!  And probably years beyond that since I'd done anything but a straight stitch on ANY machine.

So I stopped here, knowing I could rip it out.  And also knowing that it looked marginally better in person.

I worked Tuesday and thought about this some.  I was ready to rip it all out when I got home, in favor of some echo quilting in matching threads in the cup parts.

But something made me decide to try stitching between the candies/cups.  Maybe my friend urging me on via text?  Maybe a desire to just see if it would look better with more?

This step was also not without trouble.  My machine kept skipping stitches, so I'd have a zig and a zag and a zig and a...what?...straight stitch?  Thankfully, again, this piece is not large, and ripping out that stitch is quite fast.

Finally, it was done! 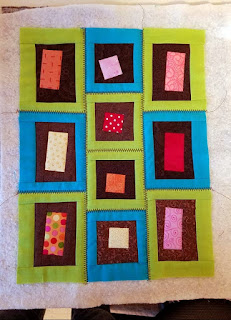 And it doesn't look too bad.  I think the extra stitching did make a difference.

I considered going around the outside edge, but knowing binding would be applied next, I wasn't willing to see if I could make that fit right.  (Okay, okay, I chickened out a little, too!)

But I had found some awesome kinda-striped fabric that looked like it could be a fancy chocolate box, so it was chosen for binding.

I sewed down the binding this morning and then attempted to get a good photograph.  It's rainy and dreary here, but it seems this quilt defies good photography anyways - if you look at the photos above, the colors seem to keep changing despite sunny skies or whatever.  So it is what it is. 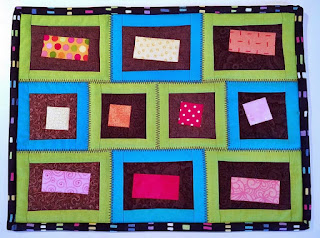 So I ate a bunch of chocolate.

So a little bigger than actual size on the chocolates, but on the whole, a small quilt.

On to the next project...baby quilt #1.  I found out the other day she's having a boy.  This is her second child, the first also a boy, and she got the preppy alligator quilt for him.  I've found a quilt I rather like for this second child...and I think I'll be able to stash-dive to complete it!

There is also another completed little quilt sitting here, but as it is a challenge and I don't want to tip my hand too soon, it will have to wait a few more weeks.  But I'm far more excited about this one than my box of chocolates!

Looks yummy to me! Wish I had a bite right now! In fact, I could probably eat the whole box in a few minutes!---"Love"

A box of chocolates - what a great idea! Far fewer calories than the real thing - and just as YUMMY looking - ;))

I think your box of chocolates came out great! Oh, and I just looked at the link for the baby quilt... STARS!! I love it! In case you forgot and you didn't stop to think about it - there were no cat stories or photos today; surely, they can't ALL be behavin'. LOL

It is so cute, I love the ideas you come up with! These challenges have been fun to watch. I, too, would end up eating a lot of chocolate if I had a chance, goes perfectly with the quilt! I loved the alligator quilt when you did it, now a chance to make stars. You can't go wrong with stars. Can't wait to see your next challenge quilt. Since you are excited about it, it will be great!

Haha!! Yes! That would be me, checking each one so I didn't get slammed with coconut flavor in my mouth. (only, now that I'm full grown, I cut them open instead of taking a nibble - more to fully escape that dreaded coconut than to be polite, if I'm 100% honest! Bahaha!!)

Love the box of chocolates... As I was reading I wondered if you might put them in a heart shape box...

Wow! You really thought of everything in the chocolate box. Way to make it modern, too!!

What a fun little quilt. I like all the detail about your decision-making throughout the process.

love this! great project! I'll admit that I too ate a lot of chocolate this week!