Waaaaay back on May 1st I showed you this fabric: 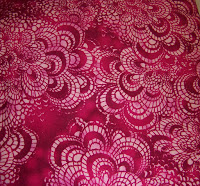 Though I had gone to the store with the intention of buying a black back for my May UFO, once I had seen this fabric, I wasn't going home without it.

And I pieced it into one large piece shortly thereafter.  And ordered pink thread even.

I knew how I wanted to quilt it.

I looked at it most days as I walked past my longarm - it was hanging on one of the bars, waiting.

I moved it to quilt the 27th birthday quilt.

Wednesday evening, May 31st, I decided to quilt it.  While the hubby and I were out to dinner.

We got home around 7:30pm.  After oiling, loading and watching a video on the quilt motif I wanted to do, I was ready to start quilting.  At 8:30pm.

At 9:45, I had made three full passes.  Two more would be needed, but I had to be to work at 6am Thursday, so I called it quits.

Thursday I flew out of work, knowing I wanted this quilted before my guild meeting that evening.  The first Thursday of the month is a UFO reveal (it has been for a long time, but this year they're doing a formal UFO challenge) and I wanted to share.

At 5pm Thursday, June 1st, this came off the longarm.

It's not bound.  I don't even have fabric for binding yet.  But we'll get there.

Oh, you want to see a photo? 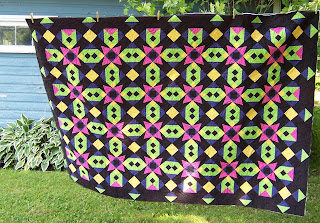 I took about 23 photos, and even got a few where the quilt was hanging flat, but this one had the best color and does show off my hostas that I completely ignore every year, but keep coming back beautifully!

I also got to meet a neighbor and his dog.  She likes to wander and I guess he hadn't been paying enough attention and she ended up in my yard.  He's a nice guy and the dog isn't large or scary - and now I know who to call if she comes to visit again.

What I didn't take a photo of is the quilting.  Hmmm...the quilt is sitting nearly within reach, I just have to get up... 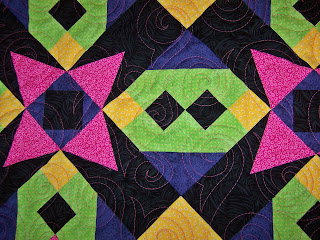 This is my first go at the swirl hook and some are far better than others, but there you go.  My quilting.  It went fast, but took about 4 bobbins!

And for those of you who don't remember, the story of this quilt...

Way back in 2013, Quiltmaker magazine published this pattern.  It was done in similar colors, but with a white background.  They had their Scrap Squad going at the time and one of the gals did this quilt in batiks with a black background and set it on point.  I was smitten!  It's actually one of the first things in pinned on Pinterest!

In June of 2013, I bought fabrics.  (Thanks blog for recording that!)  Gradually, I worked on this.  I remember a quilt retreat where I made all the pointy pink triangles - paper pieced - as well as working on a few other parts of the block construction.

And then later I put it together not-on-point and couldn't figure out what was wrong.  I didn't have the photo with me, so just sewed away.  I decided to put on a blue border and that would fix it.  It did not.  I remember a full day spent sitting under a tree on Drummond Island literally tearing this quilt apart.  Row by row, block by block.  But hey, I was outside!

I remember a guild sewing weekend where I layed it all out on the floor - I'd left some rows together to avoid re-sewing where I could - and figured out what needed to be sewn, what else needed to be ripped and constructed the extra alternate blocks I needed but didn't calculate for because, again, I wasn't looking at the right instructions.

This quilt has had a rough road and by the time I had to quilt it for the May UFO, I wasn't sure if I liked it any more.  But like happens so often when I actually get to the quilting part (and get past that first pass where I'm white-knuckling the handles because I'm SURE something is going to go horribly wrong!), I fall back in love with the quilt.

It's about 70x90", but I haven't taken an official, final measurement.  If it's large enough, it may go to the niece with the new twin bed, instead of the Twisted Blossoms quilt I had planned.  But we'll see.  It might also look good on my couch...

Also finished this month - actually finished, not just nearly finished like another one or two - is one dolly quilt: 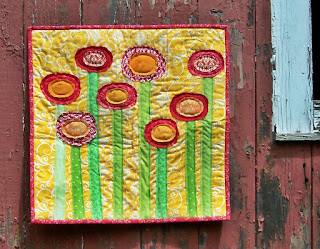 I took this out and pinned it up on my barn.  It's about 17x17" and is my own design, inspired by something I saw on Pinterest.

But I loved the contrast of the modern quilt on my old paint-peeling barn that I ran back inside and grabbed another quilt and some extra pins: 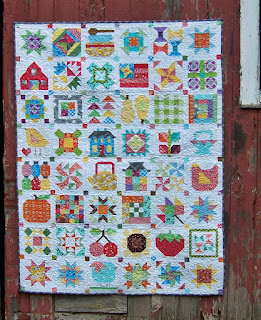 I AM going to hang this quilt in my bedroom.  The hubby knows quilts are going up on the walls (also considering my paint chip challenge and my Xylem ASQ challenge that went nowhere) - in addition to returning a few of the pieces that were there originally.  (And a few aren't going back up...)

So there you have my UFO for May.  Not quite finished, but much closer than before.  And more likely to be actually finished than before it was quilted.

Now we're on #7 for the month of June.  That's my Science Geek hexie quilt.  I have the backing already.  I know how I'm going to quilt it.  I even have the orange thread!  Maybe I'll start on this before the last day of June?

And yellow had been chosen for the rainbow scrap challenge color.  I don't have a ton of color, but it's such a bright, happy color, I know I'll enjoy making my cats.

I'm way behind on my tiny wonky stars and have no inspiration just yet for the June dolly quilt, but the hubby has to work this weekend, so once I'm done here on the computer and run a quick errand, I'll be able to sew a bunch.  I still have my ridiculous list of projects, but I'm getting there.  I'm not going to let it overwhelm me - it's going to INSPIRE me!

Happy quilting!
Katie
Posted by Katie at 9:19 AM

I love your May UFO... I think I have that issue here somewhere - maybe I'll add it to my 'to do' list (MAYBE). :) I have a couple of doll quilts planned but haven't gotten to them yet :(

That backing fabric is beautiful and your quilt is stunning! I love quilts with dark backgrounds, it really makes the colors stand out. You did a great job, even though it was rough going to get it to this point. Binding should lead to a quick finish. The dolly quilt is adorable, very happy little quilt! Both quilts look wonderful hung on your old barn, I bet we see more quilts photographed there. Hope you have a great day sewing!

I'm sure you are glad to have your big quilt finished almost. Your quilting on it is really pretty. The dolly quilt is cute too. That last quilt amazes me; there is so much work there, and it went together beautifully. ---"Love"

Your quilted swirl hooks look great from here and it's stunning quilt. The colours just leap of the screen. That barn has real character and is a terrific backdrop for quilts. You make terrific quilts Katie and your enthusiasm for quilt making is inspiring.

Yes, the quilt is stunning! The black makes the bright colors show up perfectly! I have used the swirl hook quilt design in a few quilts and once I get the hang of it, it's pretty easy. Each time I do it, I have to review it in the book. Now you have a barn quilt! How neat!! I would like to do a tour of a nearby county that has quite a few of them - painted ones, of course.