After my last post, I did make time each morning before heading in to work (one day at 2pm, the other at noon), to get into my sewing room.  I was determined to get the rainbow blocks completed for this month so I could sew with my friends on Saturday guilt-free.

What else did I make? 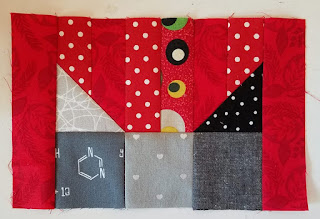 #65
skylight
(41 pieces, mostly template-cut, this one took more than two hours to cut and sew!)

So there you have it!  All the reds are done. 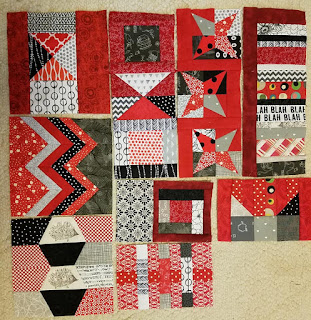 I have just the oranges left - 9 blocks - and then I can start putting the whole quilt together.

A few of you are asking about this pattern. I haven't mentioned it in a while, so it's from the book Patchwork City by Elizabeth Hartman.  I am doing the quilt in the rainbow, bright colorway.  The blocks are all oddball and modern, often template pieced, but fun.  Mostly.  And we'll call this a skillbuilder...

Once these were done, I was free to chase my Christmas Squirrel.

Earlier this year (or maybe it was late last year?), I decided to make a quilt for my hubby's aunt.  (It can be seen here - scroll down a ways!)  I bought fabrics without any actual pattern planned, so I just bought 2 yards (I think) of four prints and about 4 yards of a "background" and brought them home.  (Also I bought the backing.)

I didn't use nearly as much as I thought I might, so now what?

I'm not particularly fond of the fabrics (neither is my longarm), but then I found the 12 Days of Christmas quilt along and blog hop.

So yesterday I packed up my stuff, including my newly purchased Tri-Recs rulers, for the project, to sew with friends.

I don't have enough of the fabrics to use just one red and just one green.

So let's do some math and see if I can use both - careful placement so it looks good.

Oh, I think that will work.

That will not work.

Have a little mini-temper tantrum (most of it inside my head) and go do something else.

The guild has made a bunch of quilt tops and then the gal organizing it, well, I don't know.  So they're tops.  So a few members decided to tie some of them.  They're for charity and I feel bad I'm not longarming any of them, but honestly?  No one asked.  The whole project went from gung-ho, talk about it every meeting, send out e-mails to *poof* gone.  It worked out well, though, because I helped tie the quilt they were working on that day.  And I was the tallest one there, with a good back to boot, so I did the laying over the table to get the very center ties done.

And by the time that was done, I was able to refocus my efforts.  (I am still angry I couldn't do what I wanted, but knowing I bought Christmas fabric at Christmas time, I also knew I wasn't going to easily get any more!)

I decided to just use those squares I'd already cut and cut a few more and make what I hope will be a 64" x 64" four-patch quilt for charity.  It probably won't go to the auction or sale at the church like the original plan had intended, but it will go somewhere and keep someone warm.  Just where is to be determined.  (Any suggestions?!) 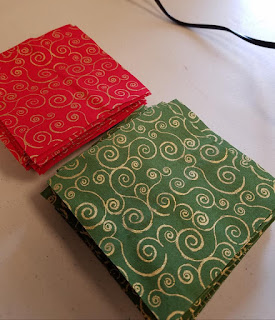 My pieces...I did have to cut a few more green, as my math was (yet again) wrong, but I at least had enough there.  (I still have a little left of each of these - enough for about 18 more squares each if I need it!)

And then I got busy sewing.  4-patches go quickly and so long as I was paying attention to what direction I was sewing things, I should be able to do this without much design floor use...

By the time everyone was packing up to go, I had a bunch of smaller sections together!  (I also had a pretty fun time with the few quilting friends to made it to the sew-in.) 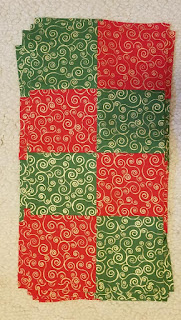 I haven't counted these to be sure I have enough to make the quilt as big as I expect (math was failing me terribly yesterday and I just didn't want to find out yet another place it had happened!), but I'm sure whatever I end up with will be large enough.

(But it does look kinda busy in this photo...uh oh!)

I have chores mostly done for today and the hubby won't be home from work (it's his weekend on the rotation) for a few more hours, so I'm going to go work on these and maybe I'll have a top by the end of the day?

But first, I'd like to share a photo with you.  Of Gabby.  Who is trying very hard to earn the middle name "No" like her big sister, Emma.

She plays our piano (not just walking across it, but sits on the bench and pokes at keys), but I haven't caught her at it long enough to get a photo or video, but today, when I was tidying up the kitchen, I turned around to find her doing this: 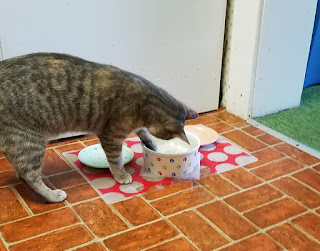 I had just washed the placemats the food plates and water bowls go on and refilled the freshly washed water bowl.  In the past few days, I'd come into the kitchen to find a puddle around the water bowl.  I just assumed either scaredy cat Skitter or rowdy cat Gabby had been tearing through the doorway you see there on the right and knocked into it.

Gabby is "drinking."  She fishes around in there with one paw or another, makes a huge mess, but does lick the water off her paws every so often.  In the meantime, she's making a big puddle on the floor.  (I have a video, but am not sure how to get it off my phone and onto my blog and I want to sew, so that's a project for another day!)

You are lucky you are so doggone cute or you'd be an outside cat by now.  (Not really.)

It's like she knows what is naughty and pushes the limits.

I thought Emma-No was bad.

The bar has been raised.

And now it's time to go mop up another puddle (probably) and then sew!

Those red dots aren't straight - LOL - like anyone is going to notice - except the quilt police - and then BOB would like to see the block that THEY made with the red dots all straight. In the meantime - I like your Christmas Squirrel - and wonder how Gabby-No eats her food if that's how she drinks her water - ;))

Oh, I'll be asking you to quilt one of those tops for me/us, but after we talked about it this weekend, I know to ask you this fall when the weather will hopefully be cooler. I don't know why you couldn't donate that Christmas quilt to the church's bazaar... if it doesn't sell, which I doubt, then it could be donated to another organization - some people like red & green all year round and others won't care what color it is as long as it gives them some warmth. If you want batting for it, just let me know - we probably don't have anything that you'd want to use for backing, but you know we have the batting :).

Your squirrel may not have grown quite the way you expected, but I'm sure it will be appreciated. The fabrics are pretty. I'm looking forward to seeing your Patchwork City "skill builder" put together once the orange blocks are done. Is August orange month? Gabby is a cutie. No fun for you to mop up after, but cute to watch from here :)

Have fun with that Christmas Squirrel!!

New projects are always way to enticing. Have fun!