Christmas quilt along squirrel and a new squirrel

In my last post, I shared with you some of the Christmas quilt saga.

Today, I present to you MY version of the 12 Days of Christmas Blog Hop quilt...pretty different, no? 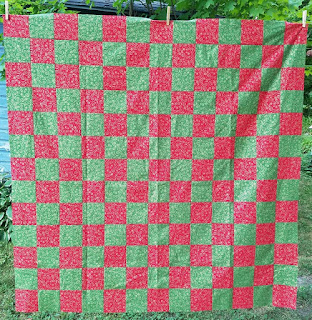 As I said in my last post, this quilt started out with truly good intentions.  I had a stash of Christmas fabrics and thought that, by combining the two reds and the two greens, I would have enough to make the quilt along quilt.  I really like the quilt.  I even bought the rulers.  I wanted to make it.  (I still might...)

It turns out I did not.

Maybe I did, but math was not going well the day I started it.

(It probably didn't help I was sewing with friends and trying to pay attention to conversations and join in, but we're just going to pretend that wasn't a distraction, okay?)

So, after a little frustration and diverting my attention for a bit, I decided to just sew this up.

And I got busy at home in the days since.

So it turns out that yet AGAIN my math was wrong.

What I HAD was enough to make an oddly shaped 8 by not quite 6 quilt.  Or something.

Thankfully, I had enough fabric to cut about 18 more of each color squares and could make it 12 squares by 14 squares.  (By this point, I'd given up on the 4-patch idea.)

Well, why not?  I mean, what else could go wrong?

So I decided the quilt should have red in all the corners and cut the one last red square.

And it went together just fine.

So apparently 13 is not an unlucky number for me.

Or maybe I'd just used up all the bad things fate had to offer me on this quilt and it was forced to let me have this one.

And I'll quilt and donate it for a Christmas thing later in the year.

On to the next squirrel.

I will admit, the squirrel started out with the Flags for Sue project.

I really was going to pull out some of my darker blues and truer reds and make a few blocks.

And then I remembered the Star Spangled Pineapple quilt.

And it was all over. 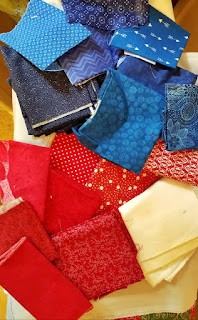 ...and even pulled the 2 yards of grey I got at the quilt show garage sale weekend before last!  (Is it okay if the fabric is aged in someone else's stash!?)

I decided I wanted the quilt a little larger, but my grey was a limiting factor, so I decided not to do pinwheel cornerstones, which meant I could do skinnier sashing and make my grey last longer.

A little math, but this time I wasn't distracted. 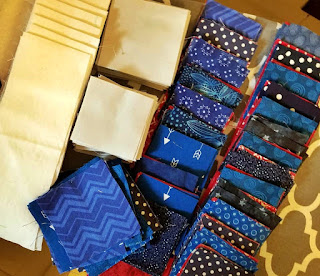 Due to a paying attention error, I cut the blue squares the wrong size to make half square triangles two at a time.  I had enough to recut the squares needed to make the pointy parts of the pineapple top, but decided to use the full squares (correctly sized) for the center of the top.


Well, how about this in-progress shot of the tops? 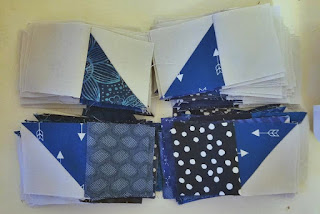 But there was some squirrel poop created here... 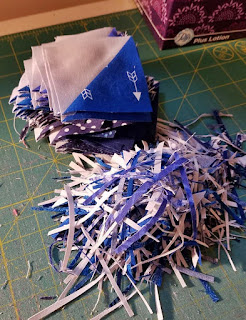 ...but this in the trash.  There will be no squirrel poop giveaway this round!

Last night, after work and a few chores, I sewed a bunch more.  I didn't want to go to bed, but knew I needed to get up fairly early today to get a few more chores done before I head to work at noon.

This is where I had things last night... 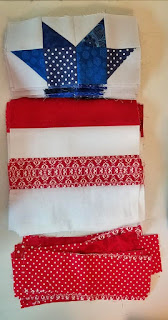 ...I kept telling myself, just one more set of seams and I'll be at a good stopping point.  And then I decided that just ONE MORE would make it better.

This is truly a good stopping point, but it was after 10pm when I finished!

There's still a fair amount of sewing to go and I'm making 24 pineapples that will make a good-sized throw quilt.  (Yes, double the original pattern, but with 2" sashing, it won't be double in size.  IF my math is right...)

So far, my math has not failed me other than to miscalculate the number of grey squares I'll need to round off the corners with the lost corner technique.  But that's easy to fix.  I have about 2/3 yard left and the inner sashings are all cut.  Borders will be determined by how much I can get out of what I have.  Or maybe I won't do them.

So that's it for today.

This squirrel is coming together fast, but I'm having fun.

PS Maybe Sue will get some flags later this week?

PPS I also have this squirrel - my mom is going to teach me to make an apron from this on Friday.  It's for a friend for her birthday...I'll tell the rest of the story another day... 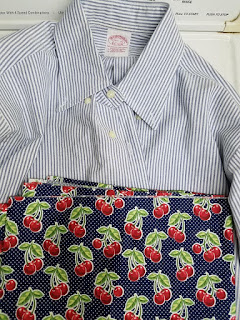 Interesting - a star spangled pineapple quilt! I'm sure I will love it as I love all patriotic quilts (but had never heard of R/W/B pineapples). Can't wait to see it! I have seen aprons made out of men's shirts before and they are very cute, so I will look forward to seeing that as well.

Good job getting the Christmas top done, you can do some fun quilting on a quilt like that! I have been fighting the urge of the "squirrel" since the blog hop started as I have a lot of Christmas stash to use up, nice to know I am not alone. :)

I've seen a pic of the R/W/B pineapples and they are adorable!!

Your Christmas Squirrel turned out just fine!! I'm glad you added the extra red squares in the corners - I think tops look better if the four corners match. Your Star Spangled Pineapples are cute - patriotic and Hawaiian - what's not to like? Looking forward to your apron - ;))

Star spangled pineapples will be a very fun quilt! Sounds like you're having fun making it too. I'll be back to see the apron. I can't quite picture it :)

I like your Christmas squirrel! Nice save of a bad math day....

Hope my 4-patch math (or lack of it!) turns out as well as your Christmas quilt; I've been making 4-patches today, and have never even figured how many I'll need. I'm thinking a R/W/B pineapple quilt will be pretty snazzy! ---"Love"

Great way to use what you had for the Christmas quilt. It sure looks festive