super squirrel and some red blocks

When making the quilt with my Tula Pink Tabby Road fabric, I cut carefully...both to try to keep from chopping kitty heads off and to save the selvedges.  I am not a selvedge quilter, but these were special.

I finished the top and had not only the selvedge strips, but a few skinny strings also.  Larger pieces (there are some) were folded up and put away, but these strips were just left out.  I can't tell you why.  I guess I had higher expectations of myself...

Friday, before the quilt show, I pulled out the selvedges and realized I also had those strips.  I layed out all the selvedges on my ironing board as inspiration and thought some on what I wanted to make.  I have a few ideas saved on a board in Pinterest, but nothing had jumped out at me.  But after seeing them all out and seeing the size, I was inspired to make a bag.  And I had enough to make a fairly large bag if I did things right. 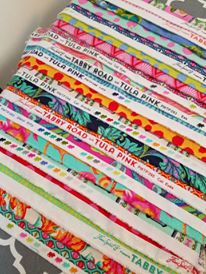 So at the show, I was looking for something that would work for part of the bag.  I didn't find anything.  I did find some fat quarters on Sunday, though, so this squirrel gained momentum.

Monday, before I had to be to work at 2pm, I started sewing... 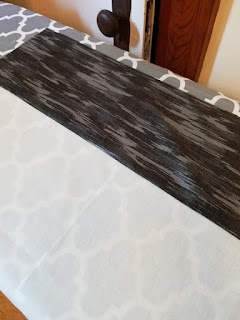 The grey (it looks a bit like camo from a distance, but not as much up close...or folded up in a fat quarter, but it was $1, and I like it) will become the bottom of the bag.  The white is a thin muslin that will be the foundation for selvedge piecing... 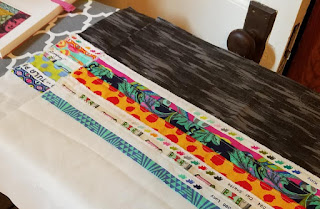 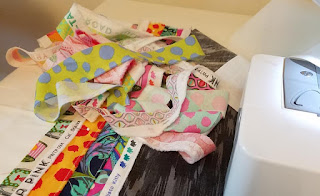 I continued to work on it last night after I got home from work (an opening shift) and managed to get not only the outside part constructed, but also the inside!

And then my brain refused to allow me to figure out how to sew the two pieces together.  I've made bags before where you sew them correctly and use a binding to finish the top, but I didn't want that for this one.  I wanted topstitching.

And then I started thinking more about straps.  Originally I had planned to use the strings (not selvedges) to make straps.  And sew them on outside, afterward.  Then I chickened out and decided I'd try to use the other fat quarter of the grey until I realized it wasn't going to be long enough.

So I went to bed.

This morning, I had the day off work!  I did a few chores and headed back up to the sewing room.

First up: Find a tutorial how to sew that bag together correctly.

Next up: String piecing for straps.  (Ugh.  Also not a favorite construction method.)

I decided to also work on my rainbow scrap challenge blocks, using the two projects as leader-ender sewing for each other.

That took A LOT longer than I thought it would.

(Of course, the straps were each about 30" and there were two of them and then the strings I had were, at most, 2" wide...mostly smaller.  But I was going to use it ALL!) 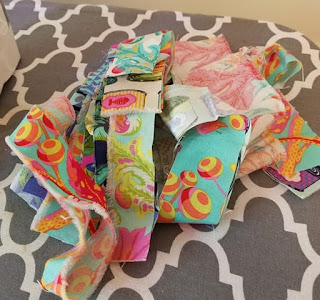 I cut strips for foundations and started sewing... 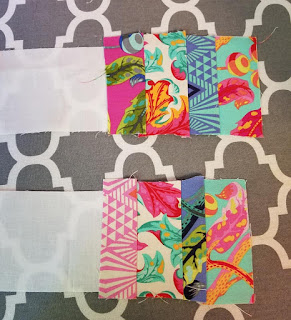 Making progress.  I'm not sure if I like these and I'm worried that all the seams are going to make the straps less sturdy, but I'm Doing. This.

They're about 30" here and got trimmed shortly after this. 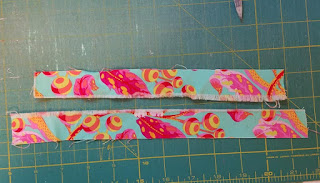 This is what I had left over.  I cut nothing extra!

Then the fun part of sewing and turning the straps.  I didn't finish the ends, so that made it a little easier, and sewed a skinny selvedge piece into each strip to make turning easier.  And then the fun process of pressing them nice and flat and burning fingers. 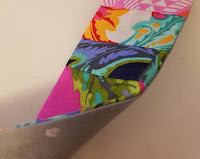 It's pretty thick on those edges.  Trial one for topstitching = F.A.I.L.

Rip it out. Put in a NEW denim needle (fist trial was a used needle, but I didn't think it was that used...).  Rethread machine.  And loosen the walking foot, set foot down on thin cardboard and re-tighten screw to have a little more room built in there.  Thankfully, it worked much better and other than having a little trouble climbing the mountainous seams, my little machine did okay.   (And it doesn't have to be perfect, but that first time...rats nests of thread, zero tension on the back followed by super tension...ugh!)

And now, pin everything together properly (at least I hope properly) and sew the inside to the outside.  Deep breath...I don't want to rip any more! 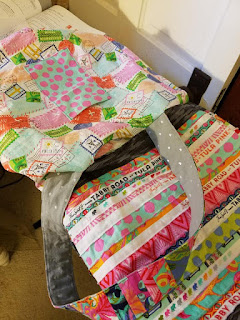 You can see the inside really well here (because apparently I neglected to take a photo of the inside - it's fabric left over from another quilt back, plus a few scraps of Tula fabric for random inside pockets).

I inserted a piece of plastic canvas, cut to fit the bottom, for added stability, and topstitched around the top of the bag - stitching the turning hole closed in the process. 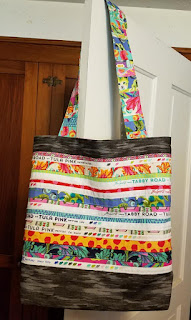 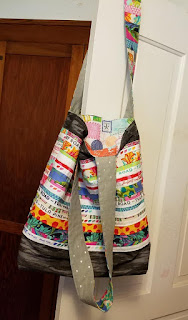 And there you have it.

Of course you do! 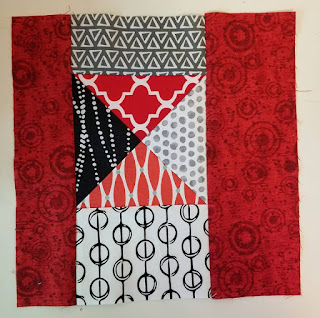 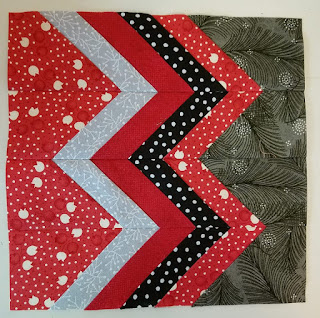 #59
favorite sweater
(due to operator error in construction, the chevrons are going the opposite way as in the pattern) 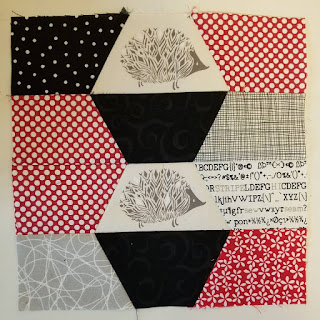 #60
sushi
(in hindsight, hedgehogs might not have been a good choice...) 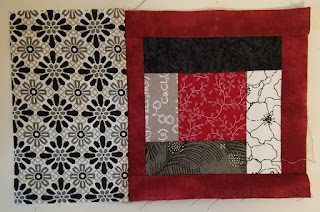 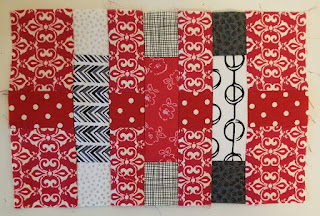 Four more red blocks to go, then 9 orange and I'm done with blocks!  I will truly be G.L.A.D. to have this one done, but I know I'm going to like it.

Tomorrow and Friday I work, but I close, so I have the morning home.  I do have a few chores to get done (vacuuming and bathroom cleaning got neglected today for the squirrel), but my guild sew-in is this weekend, so I'll be there Saturday.  I might be sewing a new squirrel there, though...we'll have to see how the rainbow blocks and such go this week...

And that's it for now.

It seems like a lot, but I spent most of the day in my sewing room today, so it was a GOOD day!

Your Super Squirrel turned out GREAT!! I'm so glad it WORKED!! And NO - I am not chasing this one - at least not today - LOL. Love your Red Blocks - and your hedgehog sushi - too cute!! - ;))

I didn't think about repositioning the walking foot because you can't do that on my domestic machines. I'm glad it worked out for you - what a fun bag!

I love the bag!!! I have been saving selvedges for years and have a ton of them. So far I haven't done much with them, except a seat cover, a table runner and I have sewn a lot together for maybe 2 more table runners - if the first one sells. I really want to make a bag or 2 out of them as well. Your red blocks look great and I am excited that you are almost finished with them and will be putting them together soon. I can't wait to see what it looks like!! I'm not really a fan of her designs, but I do like some of them - and sometimes it takes a while for things to grow on you (me). Ha! I'm on a trip right now, but will be home soon and will post some pictures.

What a neat bag! Love the hedge hog in the red blocks. A day sewing is always a good day.

Love, love, LOVE the Super Squirrel Bag!!! SEW glad that you were able to get to some RED for the RSC, too.

Your bag looks fantastic and I like that contrast grey fabric. You were keen (or mad?) to make the straps that way but the finished effect looks great. I've missed your Block progress and must back track to see what you've made (BTW-I think the hedgehog is cute).

Well done! That bag looks amazing, and so do your red blocks.

I like how the bag turned out; enjoy using it!