Due to an unplanned oops-I-forgot-the-shirt moment while sewing with my sister-in-law and mom this past Friday, the pineapple squirrel made a large leap forward...

(I hung the shirt up after washing, thinking to myself "don't forget that tomorrow"...and then I did.)

After unpacking my sewing supplies and looking in the box for the shirt, wondering how I crammed everything for two projects in that small box, it dawned on me that I had NOT in fact placed the shirt in the box.  I hung it up to limit wrinkles.

Move on to Plan B.  (I had also included Plan C supplies, just in case, but those were still in the car...at least at the location where I planned to sew...)

In my last post, I shared with you the beginning of the Star Spangled Pineapple Squirrel journey...I expected this post would be the Apron-from-Shirt journey.

You get the second half of a squirrel.

I had managed, before Friday morning, to take these half pineapples... 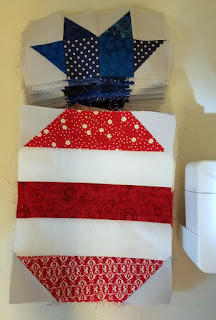 (with their slightly modified tops, due to an error in paying attention)

So I pulled these out, along with some of the mis-cut-but-being-used-for-cornerstones-now blue squares and began to sew rows of pineapples and sashing strips together.

I had a small bit of trouble with figuring, since the blocks aren't square.  I had started six rows of pineapples, not four.  You see, it was to be six pineapples across and four down, which seems completely backwards to my brain (even now), but trust me, it's right.

Thankfully, I caught it early and was able to recover easily.  No unsewing took place!

I didn't lay them out on the design floor - remember this is the one that has a cat, but the cat doesn't visit the design floor (though she did visit me from her hiding spot in the wall, accessible by an opening in the bathroom, while I was using said bathroom, but only for a quick sniff and run) - I just decided I'd try not to get the same prints next to each other if I could.  Turned out that wasn't too hard.  (And if it was, well, I wasn't unsewing.)

So, alas, no in-progress photos.

But, by mid-afternoon I had the top together! 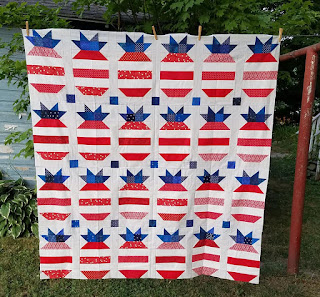 And so, unsure if it needed borders or not (and not sure I liked the cornerstones), my brother and I headed to a nearby sporting goods store to pick up some fishing lures for my husband.  (That was an adventure...I kinda knew what he wanted...)

And then it was time to head home.  With a quick stop at my in-laws to retrieve my hubby, who had dropped off his truck to have a new catalytic converter put on it.  My father-in-law is a mechanic, you see, so he was helping us out.  Of course, all that I earn the next two weeks will go to pay for said part and labor, but the truck is running much better, so I guess it's all good?

Anyways, I thought about the quilt a little over the next few days.  Pondered if I had enough grey left for borders.  And pondered if it NEEDED borders.

Conference with a friend or two and it was decided I did need borders.

Today, after a round of chores (including waxing the kitchen floor on hands and knees (it's a small kitchen) and washing windows...super fun morning...), I headed up to the sewing room and measured.  I have JUST enough for a border the same width as the sashing.  YAY! 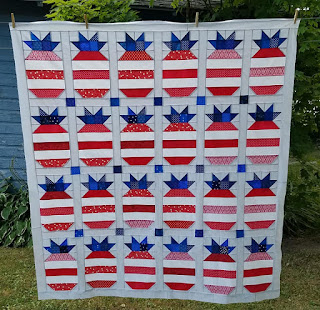 I like it better with the border, so my little bit of hesitation is gone.

I also like the cornerstones better now that it has the outer border.  Though I'm pretty sure I'd like it as much (maybe more) without them.  But I'm not unsewing.

I didn't set it just like the original pattern, but my changes were driven by the amount of mystery grey (have you ever tried to match up a solid color fabric you bought at a guild garage sale with another one anywhere?  I'm not even gonna try!) I had to work with and that I wanted a bigger quilt.  I made twice as many pineapples, but with skinnier sashings, didn't come up with a quilt that was twice as large.  Goal met.

This one is for me!

PS The Apron-From-Shirt project is on hold indefinitely.  Vacation cleaning (aka mom-is-cat-sitting cleaning) is taking priority for the remaining week.
Posted by Katie at 2:17 PM

Congratulations on finishing the top! I like it better with the borders, too - ;))

Love this top! Congratulations on the finish!

Ah, the daily frustrations we endure, right? Your pineapple quilt turned out really pretty. I rather like the cornerstones, but it would have been just fine without them also. The border is a good finish. It most likely will save more frustration from having all those seam on the outside edges. I did the same thing today to save myself some trouble later. ---"Love"

Ditto Love! I like how it turned out. Patriotic pineapples are very cute, BTW! You are lucky to have a FIL mechanic! We got rid of our truck in November because when DH took it to be checked out before a long trip (to KS & FL) they advised us that the transmission needed work and it had been worked on at least 5 times before, so we voted to trade it in and now we have a small Buick Encore that we love. Of course, now we need to get rid of the 5th wheel, which we will do soon. No more "camping" for us.

A pineapple squirrel - love it! Also love your descriptions of , well your life LOL but thinking one grey is like another, or turquoise (in my case) is like another... Thank you for linking up this squirrel with DrEAMi!

Oh my gosh that is SO great!!! What a great quilt!

Just settling in to catch up. I'm so far behind on my reading! This pineapple quilt is a great place to start. Very, very fun!