So I had great plans to write this post yesterday and then the internet went out.

It came back a few hours later, but by then, I was busy with twenty other tasks and it was just too late.  So we'll do it today!

I made a list a while back of all the quilts (and there are a lot) that I blogged about pre-Blogger.  On the blog that's gone.  So gradually I'll share them...

This round, I'm going to share a housewarming gift I made for a college friend.  We met at summer school between my junior and senior year and had a lot of fun.  She's the kind of person you can't not have fun with.  She's always in a good mood.  She's always up for an adventure, no matter how small.  And she appreciates all the little things in life, things like quilts and sharing your already-hot charcoal grill when she's a hungry college kid!

So I decided, when she bought a condo many years ago, to make her a quilt.  She loves frogs.  And I found a pattern that was perfect.  Sadly I don't remember the name of the pattern and don't even have a copy of it.  You see, I made this for a quilt shop as a store sample (it hung there a few months before I snagged it home!), so I was given the pattern and fabrics and struggled through it.

(I learned a very good lesson - quilting on a schedule that tight is NOT fun - and I won't make that mistake again!)

The process was fun and I learned some along the way - like BIG applique pieces are hard to keep from smooshing where they won't belong.  And that back fabric Won't. Go. Away.  It's one of two in my stash that seem to multiply while I sleep.  It's not that I don't like it, it's just a bit much... 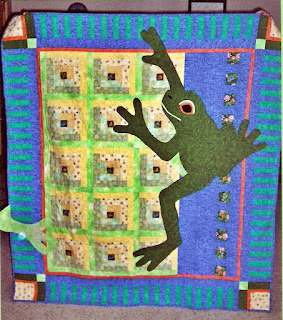 The colors aren't quite true here.  I have a printed copy of the photo that I scanned (because I can't find the original, digital one) and though I tried to adjust the colors, it just didn't go well.  The blue is a true, bright blue and the green is also a more true kelly green.  The frog is about the right color, though.

Do you see that arm poking around the side there?  From the back? 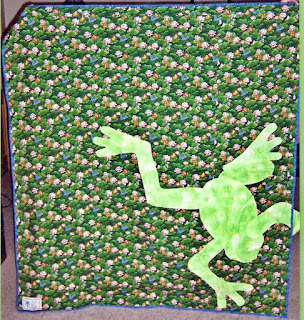 Look who is hanging out on the back!

(The colors here are pretty good...)

I have a note in my scrapbook that I gave this to Tasha in the summer of 2005.  Whew!  That was a long time ago!  We're still friends and she's had three kids, who have all gotten quilts!  Gabriel's quilt (2nd child) can be seen here, and Anna's quilt (3rd child) can be seen here.  I haven't blogged about Claire's quilt (1st child), but that is probably on the list...if not, it will be now!

I've also been to her wedding and a few fun parties, but with both of us having busy lives, we don't see each other very often.  Hmmm...perhaps it's time I give her a call?

This week my sewing room hasn't seen much action.  But I did sew some Flags for Sue...

...just three, but I used up a smallish chunk of white, and took a good chunk out of the red.  And that blue?  That's the other fabric in my stash that just won't go away.  I don't much like it, but it is a nice darker blue for these blocks.

I also spent most of Wednesday making a disaster of my kitchen... 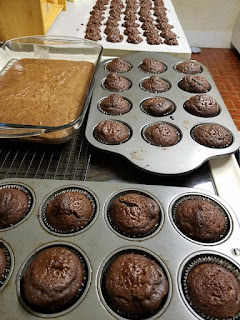 It started out with the cupcakes.  The hubby's work was doing a fundraiser cupcake war and he asked me to participate.  The cupcakes look a little lumpy here (and I think I know why), but once they were filled with a peanut butter filling and iced with a chocolate ganache, they looked pretty good! 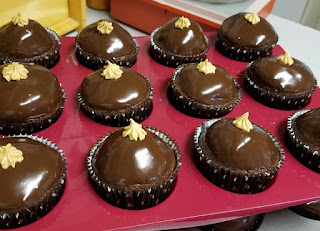 (hubby says they look like boobs...leave it to a boy to see boobs in a cupcake...)

They didn't win, but it was okay.  Participation was key here.  And he heard good things about them.

While the oven was hot, I decided to make a batch of brownies.  And why not make some no-bakes, too?  The kitchen is already a disaster...

And with that, a few more chores are calling my name before I have to head to work.

Why haven't I seen/heard about this frog quilt before?!!? It would be a great idea to have on hand/in the back of my mind if I run out of ideas for youngest daughter lol. LOVE the idea of the frog on the back!!
Before you leave on your trip, make sure that you either lock your 'squirrel' up or sic him on your mom - or better yet, take it with you - whatever you do, I don't want it down here!

Have fun.. :) I plan on spending some daylight time out on our new deck - having a mini sta-cation.

Hi Katie: That frog quilt is awesome and that frog arm sneaking around from the back is even more awesome. I'm glad you still had pictures of the quilt and could share them with us.

I normally do not like frogs, but those two are so cute! I don't remember seeing them before so I'm really glad you showed them today. You know I like the flags I'm sure. The other two links showed a couple of cute quilts too; I'm sure the mom appreciated all of them. Hope you got your kitchen cleaned up from all that cooking! ---"Love"

The frog quilt is outstanding!

One of my quilty friends goes by "Frog Quilter" - I'll send her over to see your quilt - and I love the cupcake boobs - too funny!! - ;))

The frog quilt is adorable, love the arm reaching around from the back! Those cupcakes sound wonderful, do you share your recipes?

What a terrific quilt! I just LOVE that arm poking around to the front...from the back! It's all kinds of merriment! Thanks for linking up...man those cupcakes look to DIE for...now I want to bake but it's way too hot to heat up the kitchen!

Gotta love that frog reaching out from that back :) I hope you gave your friend a call. I know just what it's like to stop and realize that with life's busyness I haven't heard from/reached out to a friend in a while. One old friend reached out this summer and it was wonderful to reconnect.