a top and a squirrel

This weekend was my guild's sewing day at the local library, but I decided to stay home.  I though I'd probably get more done if I didn't have to pack everything up twice...and I always lose steam when I get home - if I stay home, I'll just keep sewing, right?

Because I'd finished all my "assignments" for the challenges I'm participating in, I was free to play.  And by play, I mean work on turning the Christmas fabrics into a quilt top.

When I left you last, I'd sewn a little and cut a lot, but things weren't progressing as fast as my brain thought they should be.  But never fear, I kept plugging away...streaming music helped... 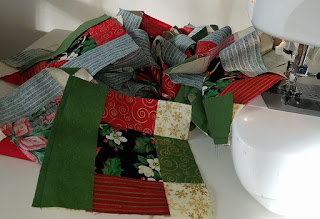 About this point, things seemed to start moving faster, but pinning the corners did slow me down.  Worth the effort, for sure.

Soon after this, Lexie decided she needed to be present.  Here she is showing me that I do not need an extension table for my sewing machine, she'll hold up the fabric for me, so long as she can sit on my lap and I pet her between each block! 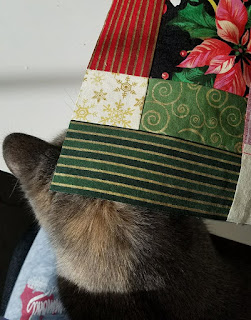 This actually lasted until I was done sewing and had to get up to press the blocks!  She's a patient little one, but she's also the one that if you pet her, you must now pet her for E.V.E.R.  She'll chase your hands to the point where you have to sit on them to hide them and she'll still poke at your arms, hoping to get the hands back out!

Once I got the blocks done, I did a quick test layout on the design floor to make sure I wanted the colors to match each other where the blocks met and not alternate.  This was not done without feline supervision, but I managed to get a photo without a cat butt in it. 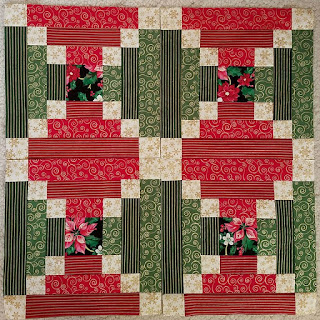 Why yes, yes I do want them to match.  (No photo of the other way, but it was not as pretty.)

Then came the dreaded long seams.  If I'd been sewing at the library, this is about where I'd be going home and would have stalled out.  But because the hubby was being nice and fed me lunch and dinner (all I had to do was take a quick break...even if it was Taco Bell for lunch and leftovers for dinner!), I kept the momentum and by bedtime I had this: 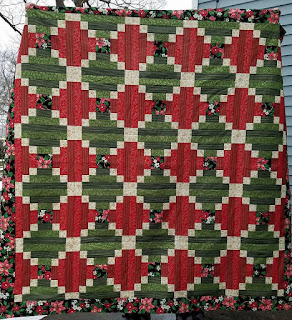 The hubby was grumbling about me making him go outside in January to hold up a quilt, but the light in the house isn't great and I wanted to get the true colors.

I'll get it quilted eventually, but after I got the top done, I kept going and pieced the back AND made the binding!  I think this quilt is calling for an all-over swirl pattern, which will go pretty fast, but I just have to make time to actually do the quilting.  I still have about 10 months to procrastinate, though!

With all this done Saturday, and no major commitments Sunday, I had another free day.  My blue scraps were calling to me, wanting a little more attention, so I thought I'd maybe make a dolly quilt or something small and simple.  Something I could finish in just a day.  So I opened my pinterest board of dolly quilt ideas.  Nothing there sparked interest, so I thought I'd try my rainbow scrap challenge board, thinking I'd find something there that could be pared down or even work by itself.

Well that was a bad idea.  I found this.

And no matter how hard I tried, this would not go away.

So I did a little drawing and a little math and figured out how to make this without any pattern.  (I mean really, it's stars and geese...this is not rocket science!)  To make it large enough to use, so much larger than the original.

And I pulled out my blue fabrics again.  (They were all put away neatly (okay, maybe not so neatly) and my cutting table looked forlorn tidy.)  Then I realized how much fabric each star was going to take and started second-guessing my squirrel.  So I made one block (after cutting fabrics), thinking to myself "I'll just turn this into a dolly quilt instead and this squirrel will go away if I make just one."

The squirrel did not go away. 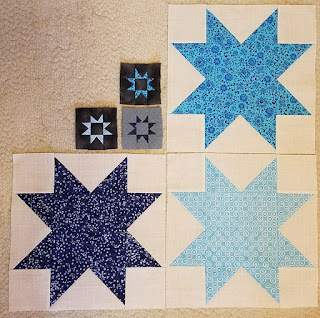 Bottom right is the first one.  The other two just kept coming.  I decided to use the same background for at least half of them.  I had two off-whites that I thought would play well together and planned to figure out how to make the geese fit in and maybe look like the darker version of my inspiration later.  Or the squirrel would help me figure this out.  (Yeah, right.)

And I made the tiny stars as leader-enders.  Which made the whole process take longer, but those tiny squares, all 1080 of them, are not getting made any faster sitting on my cutting table in neat little baggies of squares.

(I keep saying things are neat.  This might lead you to believe that my sewing room is not utter chaos.  It is utter chaos. The cats do their part in helping keep it that way, but they are not the only ones at fault.  Probably that squirrel.)

I found that some of my original fabric choices did not have enough for the big center.  (These are 12" blocks.)  So I had to edit the drawing board a little, but I was trying to choose fabrics that I really love and would like to as big hunks in a quilt for me, but also ones that wouldn't work as well as the background (sky?) for the geese blocks.  I also ended up using the same background throughout. 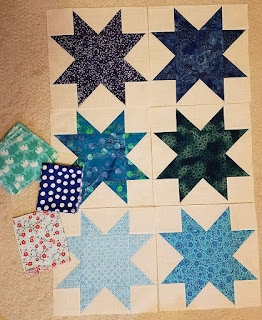 At this point, I needed to be sure my last fabric choices were going to play well.  The original has all the blues in there, and I wanted that, too.  I got to cut into some fabric I won from a giveaway over at The Object of Design (thanks Molly!) and was so excited to find out that there was just enough of the cherry blossom fabric for a center square.

By 8:30 Sunday night, I had all nine of the needed stars done! 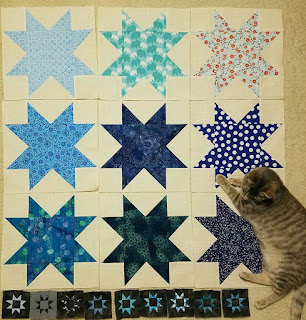 As you can see, the light is getting poorer and poorer and kitten Gabby is getting bigger and bigger (she's probably 3/4 grown now and looks to be getting a little fat kitten belly!), but she posed politely for the photo.  (Honestly, probably half the photos I have of her are blurry because she doesn't sit still long, but apparently she's learning how to cat better after watching her siblings lounge on everything I tried to do this weekend and took this photo op seriously.)

Anyways, the squirrel let me go to bed, but not without complaint.

You see, today at work, the usually scheduled test had no samples to be run.  That has never happened on a Monday.  So I COULD have decided to go in a bit later, allowing me time to either stay up later sewing or get up early in the morning and sew.  But I decided to do the more responsible thing and shift the testing schedule so a test that we had samples to run got run a day early...you know, best for the customer stuff...  But the squirrel tried hard to convince me to stay home.  I patiently explained to the squirrel that to be able to afford all this sewing, I must work.  That quieted her down a bit.

But she still hollered at me some at work.

I ignored her and fixed a printer for folks in the other half of my lab about 32,000 times.  No, seriously, there's something really wrong with this dot-matrix printer from 1998.  Probably that it's from 1998.  Or older.  (I also ran my tests.)

And she's hollering now at me to get back up into my sewing room and figure out how to tie these all together and what colors to make the geese and pick out fabrics.

Because there may also have been an online fabric purchase...for a quilt with a harder deadline...that may need attention as soon as possible when it gets here...

I wonder if the hubby is enjoying my more-or-less absence or if he's missing me?  Squirrel does not care.  (See?  Mean little squirrel!)

PS Since hearing of the Rainbow Scrap Challenge about a year and a half ago, I thought it would be super awesome to make an appropriately-colored quilt each month, but promptly talked myself out of that ridiculous idea.  Because I work.  Ah, squirrels.
Posted by Katie at 6:38 PM

Thank goodness that squirrel isn't here; I'd have to cough on it and 'share' my germs. Curious to see just what you're going to do with those BIG star blocks.

I am really liking the Christmas quilt, that border fabric ties everything together. It is great! ! ! That naughty squirrel has kept you going like the energizer bunny but those blue stars are all so pretty. Hope you can get control and quiet him down! Enjoy your sewing time, you have a very nice hubby to help out with meals.

I too love your Christmas quilt; I sat and stared at it several minutes, and I think I got it all figured out---maybe. Your blue stars are all very pretty too; that's my favorite star to make. I think maybe I need to stop watching the squirrels in my backyard and get the squirrels in my sewing room stirred up! They've been hiding too long, don't you think? ---"Love"

Love your Christmas quilt and all of your blue blocks! And I love chasing my own little "Squirrels". Sometimes they have me running around in circles or up a tree for a couple of days - like this past week - but I really shouldn't complain - it's good exercise - ;))

Oh Katie, I do enjoy your posts! Fantastic effort on the Christmas quilt and as for the squirrel. I have whole family of them competing in my sewing room. Your stars are gorgeous. Love me some stars. Would like to have seen a cat butt but happy to have glimpsed the ever helpful Lexie and Miss Gabbie.