another quilt with cats on it

Not real cats.  Well, okay, the real cats have inspected it, but I mean cats made of fabric.

I teased you with the fabric pull last week...

Last you saw, I had pieces cut for all the cats.  I sewed a bunch...and then ripped a bunch because I'd sewn the tails on backwards...and then sewed more.

I spent Wednesday last week sewing with my mom and sister-in-law and was excited when all the cats were properly together.  I had to trek upstairs to use the design floor at my sister-in-law's house, but no problem.  I'd been out cleaning out my hostas the day before and was sore - the moving around did me good!  (But my brother teased me about being old...he's all of 15 months younger!) 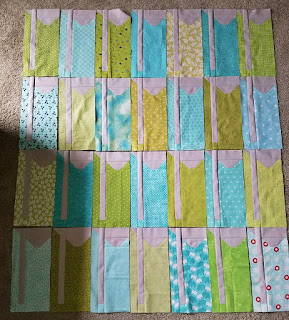 With alternating colors, this wasn't too hard, but there was one fabric I had in both green and blue and a couple were a little wilder than others, so I wanted them spread out well.  This only took a few minutes and their cat, Nala, is very wary of strangers, so she didn't come help.

Back to sewing and by the end of the afternoon, I had all the cats sewn into a top!

But it was too small with just the cats.  And the original pattern does call for a border, but I had just a tiny bit of the grey left.  (And buying more...well, the short version is that's a needle in a haystack!)  So I started thinking what to do.

So I searched Pinterest for a simple mouse pattern/idea.  I found a lot of cute, involved, larger paper pieced mice, but this quilt is so blocky and simple, that wasn't going to fit.

And then I came across one that would work!  It's simple and I didn't need a pattern.  (And if I'd had my head screwed on straight, I would have saved the link instead of just taking a screenshot with my phone...but I'd been wading through pages and pages and pages of Mickey Mouse for what seemed like ever, so I'll blame it on that...)

I did some drawing and some math and got all the fabrics back out (twice) to cut pieces for top and bottom pieced borders. 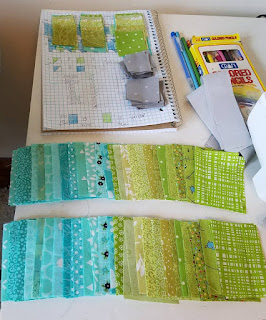 And I sewed a lot yesterday - it took a good part of the day, but at the end of the day, I had a top!  (And another area outside cleared of leaves and seedling trees!) 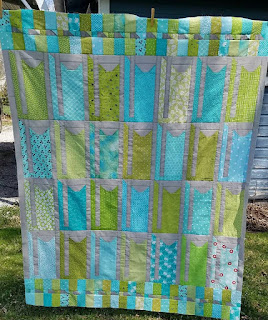 It was a beautiful, sunny, warm day yesterday (I went out to work in the yard at 7:30am and by 8:00, I was sweating enough to remove my sweatshirt!)  The wind wasn't too strong and I was able to get a good photo!

Currently I think it's 50"x66".  The original pattern can be found here.

I don't think I'm going to add side borders.  It seems wide enough when I hold it up.  It's not going to be a cover-the-whole-bed size, but it's a good cool-summer-day-nap size.

I'm not sure I like the piano keys being different above and below the mice (you'll have to click on the photo to probably see them well), but I'm not changing it now.  The mice do need to have tails and eyes embroidered.  The cats also need noses and whiskers.  So I'll be working on that soon.  Maybe.

And one last photo of the quilt before I move on to the other quilty topics... 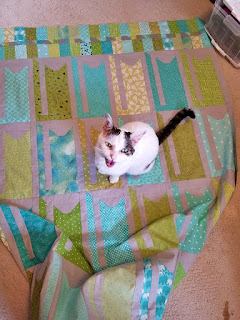 Emma does not approve.  (She was pretty determined I was going to feed her N.O.W.)

In other quilty news, the new UFO has been announced.  #12.  The one I've been dreading most.  It's finishing my Merry, Merry Snowmen quilt.  I bought the pattern ages ago at a quilt show.  No, wait, my sister-in-law (the one I sewed with this week) bought it for me at the quilt show for my birthday or Christmas or something.  And I started it, all excited.  I got six of the nine blocks mostly done (a few need embroidered arms and such) and then petered out completely.

So earlier this week, I pulled out the bin it lives in and took stock.  What needed what.

Well, that just made things faster! 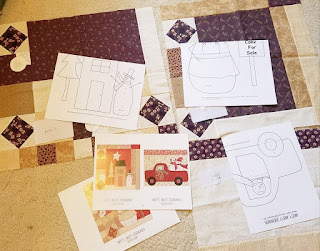 The colors aren't great here, but I left this in the middle of my sewing room floor to force me to do SOMETHING with this sooner rather than later.  I figured if it was there, I'd feel too guilty to just pick it up and put it back than if I tidied up right away.

A few hours later (chores and cooking and whatnot...), I went back with the plan to choose fabrics for the next block (just one!) and get them cut and pinned.  Well.  I did all three.  Again, figuring if I knew my pins were tied up in something it would be better motivation to sew and reclaim them.  Plus, everything was out and the iron was hot... 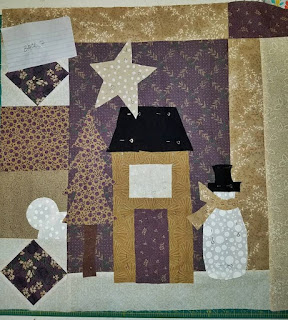 (the colors are truer here,but I find purple hard to photograph)

And see that snowman peeking out of a corner?  I'd even hand appliqued those guys for all three remaining blocks!

None of the three blocks left have a ton of pieces, but one has a truck with wheels, so those will take a bit more prep, but I even cut cardboard circles to use as gathering templates!  I don't remember doing all of this, but boy was I on a roll!

Now I just have to convince myself to sit down and sew them...

But...the hubby got a call Friday afternoon.  His work is sending him to another plant, out of state, all next week.  So I can spread out my sewing supplies, fire up the Netflix and sew!  Of course, Emma will make sure she gets to eat regularly (if she had it her way, it would be a new can of food about every 30 minutes, but she does get four meals a day, plus free choice crunchies), which means I'll probably eat regularly, too.  So while I don't like being home alone at night, this frees up a good chunk of each afternoon, so maybe I'll get it done...maybe if I leave laying out on the couch I'll guilt myself into sewing more?

It won't be all fun and games, though, because this time of year the yard needs work.  And I've been slacking for a while, so the yard needs LOTS of work.  I've done a chunk, but there's lots more to do.  I'm breaking it up into areas and setting a goal each day, otherwise I think it might get so overwhelming I'd just give up and stay inside and pretend I don't see it.  Again.  It is nice to see the progress, though.  Encouraging.

Also the Rainbow Scrap Challenge color was announced - pink - so now that the cats and their associated fabrics are put away again (for the, um, fourth? time), I can pull the pinks and talk myself into making a few more Patchwork City blocks.  I'm not sure if I need to make six or nine this month, but I have a notebook and just have to remember to look next time I'm in my sewing room.

The sewing room is looking tidier a little, too.  As I'm finishing projects, things get put away.  And in digging out the snowmen quilt, I found a bin for a project I THOUGHT I was going to make.  Like 4 years ago.  I made one block and am not too excited about it.  I think I remember the (free) pattern having issues, too.  So I returned the fabrics to my stash, stowed the patterns safely in case I decide I want them later, and that helped too!  I'm hoping that at the end of the year, my sewing room will not look like the bins-of-fabric fairy threw up...

And with that, it's off to spend a little time with the hubby before he flies out tomorrow morning.  (Ugh, I have to get up early - airport duty!)

If you ever run out of cat quilts, I've got a book full of them that you can borrow lol. I like the idea of the mice in the borders ( kind of like indians circling the covered wagons lol)... can't wait to see them finished. I like that UFO you're working on, too. I've pondered over whether to get it and do it myself, but have managed to talk myself out of it - maybe someday when I get caught up - yeah, right! That will probably be the day they move me into the old ladies' home.

The word usually is that if you have cats, you won't have mice, but I really think the mice are a perfect combination for your quilt. Looks like you did a lot of very small piecing in those borders! You have more patience than I have, but I do like the effect. Seems everyone is dragging out unfinished projects rather than starting something new. I guess I'm catching the bug too. I'm considering dragging out one that needs to be finished, but I'm dreading it! Hope you make the most of your time alone; you'll probably get several finished if you stay focused like you usually do. Have fun! ---"Love"