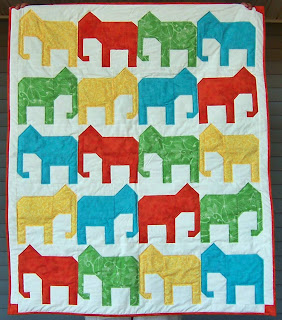 This quilt was made for my hubby's best friend and wife - for their new baby Dennis.
Born Friday, August 19th, 2011.
He's a cutie and looks just like his big sister did when she was born.
Mom loves elephants, so when I found this pattern, I knew what I was doing.  I just had to wait to find out if it would be a boy or a girl.
I heard it was a boy, so I knew pinks and purples were out, but found the backing fabric and knew it was perfect, so the colors came from there.  Turns out it wouldn't have mattered boy or girl because this fabric had me sold as soon as I saw it! 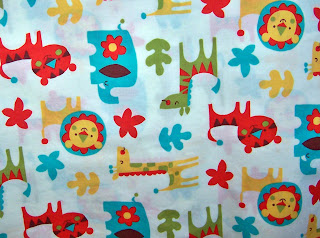 But to tell the truth, when I was looking for a focus fabric, I was thinking more along the lines of something I could use for background - behind the elephants.  This was too big, so it's on the back instead, which is just fine with me.  (I'm sure you all know how plans change once you're in the store looking at fabric.)
I gave the quilt to mom at the wedding (when I could be inconspicuous - I don't want to steal their show!) and she laughed because they've decorated Dennis's room with these colors and jungle animals!  Seems we were on the same wavelength.  And the blanket they bought for in the crib is too small...so guess what?  Yep, he'll be sleeping under this!  (Well, as much as babies sleep under blankets...)
Big sister tried to appropriate the quilt as soon as mom had it in her hands (she'll be 3 soon), but I told her she already had two, so she'd better stick with those and let her brother have one!
And now for a few quilty updates.  I've been working a little every day and have a chunk to show! 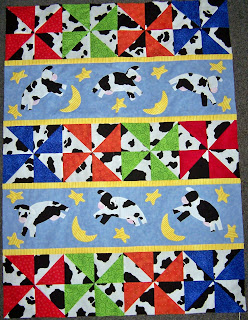 I've had a little trouble with those pinwheels.  The book directions were not compatible with my scrappy method and I ended up doing bad math and making them too large, which meant trimming, which didn't go so well.  (Lost a point or two.)  But that's better than too small, right?  (Because I didn't have any more red or enough cow print!)
And then sewing that skinny yellow strip, I neglected the points for an even strip (a 1" strip is much more obvious if you sew a little wonky to get that one point just right...) and did pretty well.  I didn't study it too closely, but I think there's only one point that looks terrible and I'm not ripping it out for that one.  It was probably one of the points I whacked off in the trimming anyways.
It just needs yellow all around and then green borders around that and the top will be done!  I can't believe it - it just all of a sudden came together.  I'd been trying to get into my sewing room for those pinwheels for what felt like ever, so I'm glad to have it this far.  But next will be the "uh oh...how should I quilt this?" dilemma! 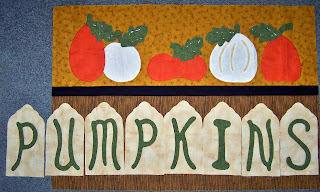 I work on this a little every afternoon.  At noon I stop studying and eat lunch, but the hubby got me started watching his soap opera, so I watch that too and sew and listen.
But I think I have a problem with those letters...I cut the tags as directed and the original does have them overlapping a little and there will be seam allowance tucked under, but I'm not convinced they'll all fit.
And I think something needs to go over the middle pumpkin.  The original had acorns up there (and leaves), but I think the acorns looked misshapen and goofy, so no acorns.  Any ideas?  Or leave it as it is?
The Whig Rose - same as you saw it last time.  The pumpkins need to be done sooner (it's a fall wall-hanging!), so they get the attention.
The job hunt: nothing.  I think as soon as I finish this exam, I'm going to apply at Wal-Mart.  It may not be the best job out there, but it's a job.  :)
Happy quilting,
Katie
Posted by Katie at 6:32 PM

The elephants are adorable and the backing fabric is soooooo perfect! I can see why the little girl tried to confiscate it for herself. Those little cows are so cute, too. The pinwheels really add some punch and color. I love the cow print with the bright colors! I have been thinking about doing the pumpkins wall hanging from the magazine, too. I know the tags with the letters overlap but it looks like it will be a tight squeeze to get them on there. Can't wait to see how it works. If you want acorns, go to the bunnyhilldesigns.com web page for free patterns. You might find something in the Henrietta Whiskers designs that will dress it up. There are some sute acorns there that you might want to try. You may have to resize them but it could give you some ideas, maybe. . .

The job search must be frustrating right now, even with a top notch education the applicant field is so crowded. You will find something, it is just how long will it take. Keep trying and if you can land a temporary job at Walmart, that will help pay the bills for a while. Best of luck to you! ! !

That animal backing is perfect! So are the pinwheels in my opinion, and those cows are too cute! When you sew you letters together, you will lose 4", won't you? That should make them fit. If necessary, you could shave just a smidgen off each letter, and for sure they will fit! That's going to be a really fun piece! Good luck on your job hunt! ---"Love"

What fabulous luck to make a quilt that fits so perfectly into baby's decor! You were certainly on the right vibe there. The cow quilt is adorable! It's so good that you are making lots of progress on your projects. Ann :-)

The elephants are just so cute! Love the backing fabric. Great baby gift.
The cows and pinwheels are adorable. Your colors really make the whole quilt more exciting.
The pumpkins are cute. I have a lot of fall wallhangings already, I must resist starting another one.
Hang in there on the job hunt. (Walmart is not a bad idea while you keep looking...does your store still have fabric? ;) ).
Happy stitching

OK, everything I was gonna say has been said, LOL. Love everything! How about adding little spiders to the pumpkins instead of acorns? In the same boat with the job hunt.

Love those elephants! I like the little red squares at the corners of the quilt. I wouldn't have thought of that, but they finish things very nicely. Funny how such a small thing can make a difference.

Your cows have come together very nicely. As far as points go, I'm struggling with a few right now. For my sanity, I've decided that perfect points are overrated :) (not that I don't do a happy dance when they do come out just so!)

Cute pumpkins. How about a black cat peeking up from behind the letters and overlapping a little with that middle pumpkin?

Good luck with the job hunt. In the meantime you're getting a lot of quilting done...care to send a little of that quilting ebrgy this way? I've been slow as molasses.

Me, too! (or five or six or whatever number I am. ;)) I agree with everyone else. The elephant quilt and the cows are just TOO CUTE!! The pumpkins - you could add another leaf or two to the top of the middle one - they would match and fill the space. And if the letters don't fit - just add a chunk/strip to the left side of the background - then pretend that you did it on purpose! ;)) Who's going to know the difference?
^..^

The elephant quilt is outstanding! I love the cows jumping over the moons too. I wish I had time to make a pumpkin quilt this fall. I've been wanting one. Maybe I can squeeze it in. I love yours. Can't wait to see how the letters go together! P.S. I'm home!!!!

The elephant quilt is so cute! Great job on it! Good luck with the job search.