After weeks of pondering (*ahem*procrastinating*) my APQ swap quilt, helping run a quilt show and a lot of other weekend commitments, I've fallen off the rainbow scrap challenge AND UFO wagon.

But not too far off!

And I'm climbing back on today!

The UFO challenge is quilted.  And binding sewn on.  I still have to do the hand-sewn side and label it (this one is FOR SURE!!! getting a label).  So MUCH closer than it has been for the past, um, 7 years.  And the hardest part is done.  Quilting it gave me a bigger challenge than any of my other quilts have.  (Quilts for others, not so much, but the problems I encountered with this one are exactly why I don't want to quilt for others.)

I'll save the whole saga of the UFO challenge for its own post when it's finished.  I have high hopes to work on it a bunch later today and tomorrow.  We'll see...

The red cats for the rainbow scrap challenge were nearly done.  They would have been done two weeks ago if I hadn't cut a few pieces wrong and created a need for cat surgery.  Minor, but would you think that made me do it sooner?  Nope.

Today was the day. 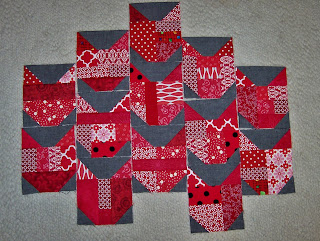 13 red cats.  Though unless you know they're cats, you might not see them.  I've had to explain to guild members about 10,000 times that they ARE cats.  So don't worry if you don't see them.  I do and that's all that matters.

Since I had/found a lot of red strips in my bin-o-crazy and stash, I decided to be a good girl and work on a few string blocks.  I mean, I had red thread in the machine, so why not, right? 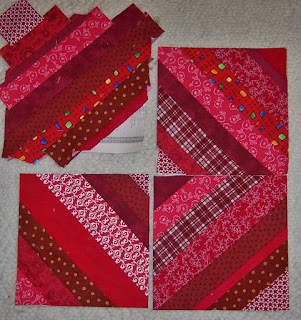 One was started before today.  Three more were started and three finished.  I'm out of non-matchy strips to finish that fourth block, but that's okay.  If I do the rainbow scrap challenge next year, I'm sure I'll have created a few more red scraps to use.

Don't ask me what I'm going to do with the string blocks.  I'm not much of a string block fan, though I've seen a few pretty layouts on Pinterest.  These will probably end up as a charity quilt, but we'll worry about that later, okay?

These took a lot longer than they might, as I was sharing my chair with Emma.  No photos, but she thought the WHOLE chair should be hers.  And got mad when I tried to sit on a corner and sat on her head instead.  (Okay, that only happened once and I did it on purpose and gently...)

Then I got to tackle the color of the month - RAINBOW!

After seeing this early today, I thought "how am I going to do that? those pieces in the cats are about 2" on average"...big prints, stuff that can't be categorized as anything else...yikes!

But I do some of my best thinking in the shower.  Please don't visualize that, just trust me, okay?  Just know I took a shower today.

I thought "why not do the cat face as one big piece instead of a bunch of little ones?"  The original is just one piece and the modified cats are the little bits.  Of course, the ears are 2" squares (minus a corner, of course), so maybe do those as coordinating fabrics? 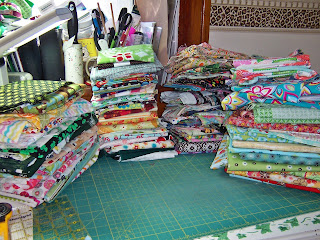 This is where an expletive flew out of my mouth.  (Preceded by an "OH!")

I have a lot of stuff in this category.  To be fair, some of that could go with color piles, but some of them are yard or more cuts and I kinda want to keep them out because they're special that way.  Or they have, like, sock monkeys on them or something.

Let's narrow the pile.  Choose only the ones I really like.  The ones I think will make good cats.  The ones with a history that will make me think happy thoughts when I see that cat. 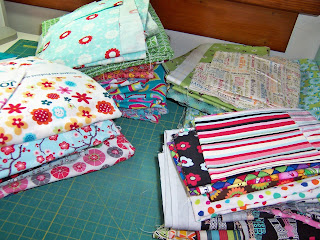 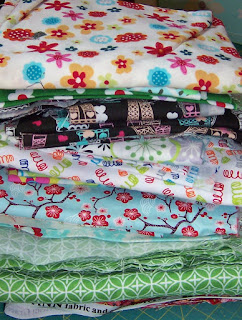 And we have a stack of winners.  (well, one got swapped, but I won't tell if you won't)

On to cutting the pieces.  Most of these are smaller scale, so 2" ears should be okay.  You might not get the whole design, but with a 4" x 4.5" piece as the face (minus chin corners, of course), I think it's okay.

About this time Green Day came onto my iPod.  ROCK ON!!! 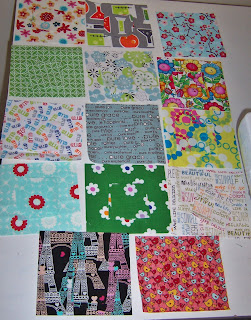 This seems like it took almost NO time.  But rocking out while you work makes everything go faster.  Even if you do have to stop every so often to break out some pathetically ridiculous dance moves because you can't just STAND there when that stuff is playing!)

The grey ear and chin pieces are also cut - I cut strips and subcut those every time I run out, but I cut in bulk, so I have quite a few left from the last cutting session.

Every one of these fabrics has a good memory.  All but one are leftovers from something else.  Most are backs from other quilts.  I think these represent ME so much more than any other fabric selections.  I allow myself to shine when I choose backing fabrics.  So much more so than when choosing fabrics for the top...you gotta make things matchy and consider the pattern and recipient and all that...so I go a little crazy with backs and give a little more of myself with the quilt that way.  (Like the one time I put a candy pink back on a quilt that was dark blue, dark green, country red and gold on the front...the gal I gave it to is a girly girl, okay?)

Maybe when the cats are done I'll introduce each one?  (Better go sew 'em, then!!!)

Oh, and UFO #1 was chosen for April.  That's Vintage Farm Girl.  Another UGH, but another I want done, so off to the shower for thinking-time!  Just kidding, I'm gonna go sew cats.  Or make dinner?  Nah, I'll sew cats.

ROFL!! What an AWESOME post!! If all those Cat parts were leftovers, I think we would get along famously. I like to put FUN backs on my quilts, too!

I was working on my March UFO... until I went to sew an appliqued border onto one side and it was TOO SHORT!! :( I found out in time to make sure the other three are the right size, but still pondering what to do with the first one... sigh.

Yea for getting the UFO so close to done! Progress is good. The string blocks are pretty, I'm not a huge fan of string blocks either, but sometimes there is the perfect place for them. I like all the fabrics you chose for the multi colored kitties. They will be cute. I especially like the colorful flowers with faces. I find I always have good ideas or solve problems in the shower. It is just a good place for thinking time. I'm looking forward to seeing Farm Girl again, I want to see how yours is going to look. Enjoy sewing those kitties!

Your posts are a hoot Katie! Great idea to make the cat faces out of multi - they are going to look terrific. Maybe they can be you psychedelic cats? I have to admire your UFO progress. Wish I had your drive and energy (maybe I just need to go take a shower). I've been saving strings to make a string quilt. I rather like the spider web version. Of course the chair belongs to Emma - especially if you need it too.

Okay, I admit I had to look a couple of times to see the cats. You have a nice selection of fabrics to choose from. You have so much energy! It's no wonder you get so much done. I do love your red string blocks; I see Christmas, or maybe Valentines Day. Have fun with you "kitties"! ---"Love"

Looking forward to seeing your rainbow cat blocks. You don't like string blocks? How funny, I love them, have made loads of them for various charity quilts and several whole quilts myself. Horses for courses, eh?

Great red cat blocks. I love all the different fabrics you pulled. The pale blue with the red cherry blossom is Wow so pretty. String blocks are great for charity quits. My mom makes many and love the process of making them.