This weekend, my guild had our annual quilt show.  It was a success.  We don't have official numbers yet, but it's at least near to the record-breaker two years ago.  I was in charge of advertising, so I'm getting lots of pats on the back, but I enabled members - all of them - to have flyers to e-mail, post online and post in person, so we all deserve the credit!

We have tables set up for members to sew and answer questions during the show (which I participated in), but first let's take a walk around the show!

The photos sorted themselves by how I renamed them, so no particular order here - some I took better photos of because they were super awesome, some were equally awesome, but I was running out of battery! 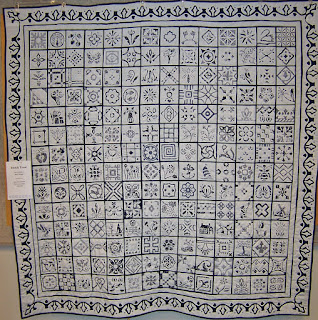 Dutch Treat by Betty.  This took her about a year and is all hand reverse appliqued.  She's giving it away.  I think she's nuts to have made it, but even more so to give it away!  Each block is maybe 6". 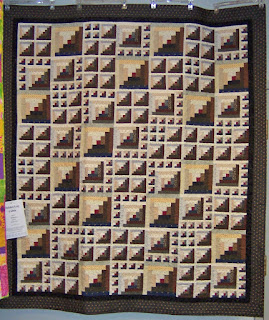 Bill's Log Cabins.  It probably has another name, but these pieces are tiny.  I think those larger log cabins measure 6", but to Bill, that's ginormous.  There's a tiny house hidden in there - can you find it?  Bill does amazing, though tiny, work.  Always. 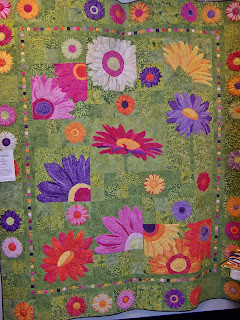 This amazing applique (machine) from Carol S. is something totally unexpected from her.  Usually she works with more muted, girly colors.  The bright, bold colors match her personality and she says it's going on her bed after the show. 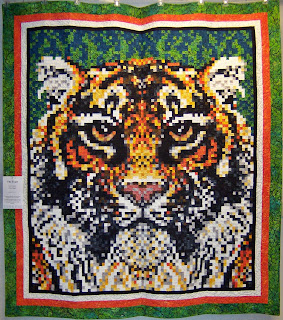 This is Cathy S's tiger quilt  She's crazy.  It has about 5000 squares in there.  But it's amazing.  And you can't see the quilting, but it enhances the design.  But it's one you have to stand back from or you lose the idea.  She said quilting it was a nightmare because you're so close you lose where you are in the quilt and therefore what motif you should be quilting!  I think those squares finished 1" each.  There's a zebra later on... 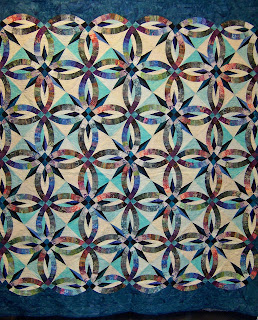 Christine's wedding ring-ish quilt.  She started cutting this one out at our show a year ago.  We call her our Energizer Bunny.  She comes to sewing retreats and sits quietly in the corner and sews like crazy.  She's paying attention to what's going on - we see her giggle a little every so often - but she's focused.  She's also our current president and she's doing a great job! 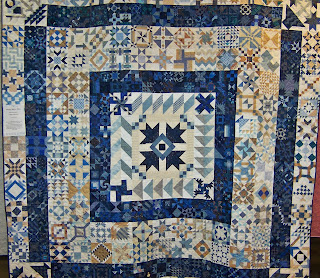 Colette's 365 quilt.  Last year an Australian designer had a quilt that had a block every day.  Colette not only kept up, but had this quilt finished in time for our late-February deadline for quilt entries.  She's about as opposite as you can get from Christine in personality (she and I are the "naughty corner" regularly at meetings), but she gets a lot done, too!  A L.O.T.! 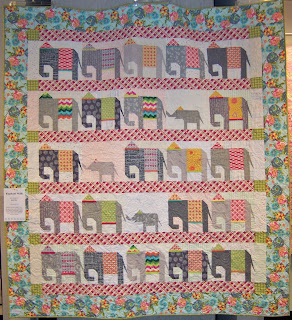 My elephants.  Without shadows.  :) 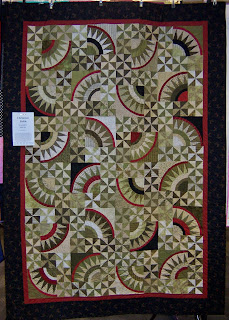 My Christmas Pickle.  I had this hanging and then realized I hadn't sprayed out the blue lines I'd marked for quilting guidelines!  Before guests arrived Saturday, I hit it with the spray bottle! 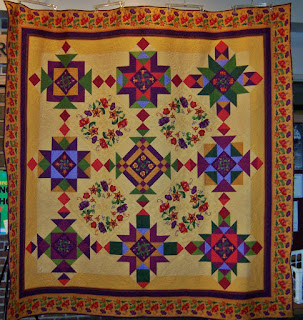 Every other year our guild makes a quilt for the Friends of the Library to raffle.  This is our quilt for this two-year period.  It was made from fabrics found in the stash of a member who passed away a few years ago by her daughter, who now lives in another state.  We kicked off ticket sales this weekend and that was a huge success! 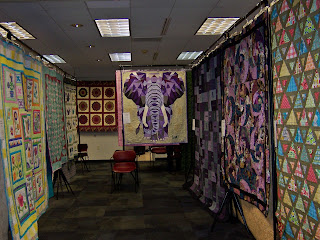 On to the wider angle shots.  That elephant at the end was made by the second man to join our guild, Larry.  He's the hubby of Energizer Bunny Christine and I think he keeps up with her.  She's referred to him as her "Quilt Fairy," as he took to her longarm quickly and has quilted many of her tops for her!  He's a great, new, addition to our guild. 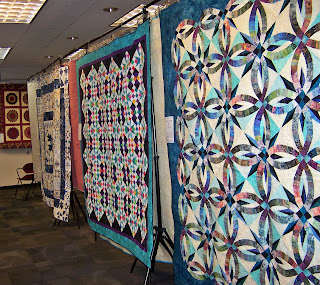 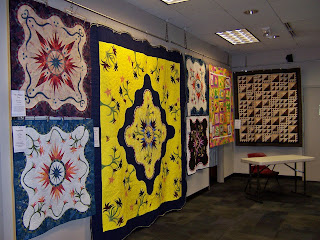 These five Pepperdish quilts (a Judy Neimeyer pattern) were completed by members who took a class a few years ago from a certified instructor.  The large one on the center was done by Christine - she got the center done and decided she wanted it larger.  It's going to be a gift for a friend.  Lucky friend! 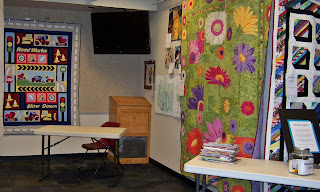 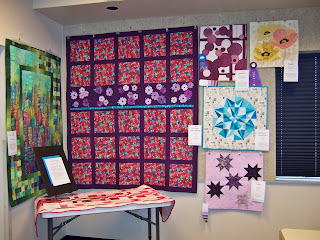 Photo one of the Paint Chip Challenge entrants.  That one on top right won Viewer's Choice within our guild for the challenge entries. 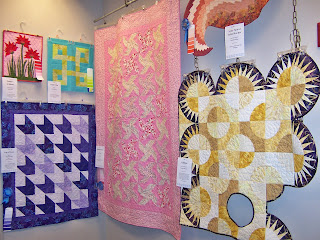 Photo two of Paint Chip Challenge entries.  They're not all here, but you can see the variety of ideas we all had! 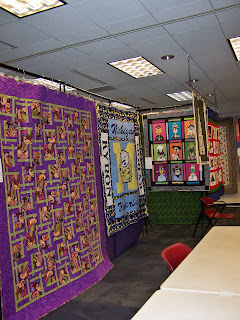 And yet another long shot.  You'd think this room was much larger than it is!  I was sitting at a table so that this was pretty much my view all weekend! 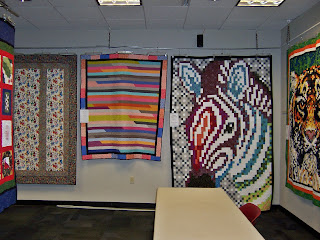 Another long shot - with the zebra.  Sadly, he's a little cut off the table and I didn't realize it until I got home and downloaded my photos.  The show has been down for a few hours now, so not much chance to get another any time soon.  That zebra was done by Colette (of the 365 quilt fame) and though her pieces are a bit larger than the tiger, it's equally amazing to see from a distance! 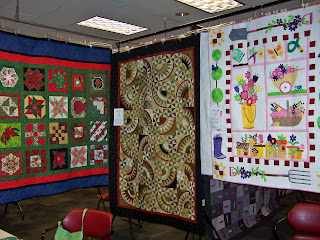 And the last longer shot.  We giggled at the garden quilt next to the pickle quilt.  Carol R's garden grows the cucumbers and I pickled them!  The last quilt on the left is a quilt made from blocks given to a previous president.  She wanted traditional Christmas colors and ended up with enough to make a double-sided quilt.  Unfortunately, I only captured one side, but you can see the variety she received (and the various ways folks interpreted traditional!).  She loves it!

What did I do while I was there?  Besides chat with friends and guests and giggle a lot?

First, I quilted the three remaining dolly quilts.  A few members had neglected to bring anything to work on and they offered to sew bindings, so I hurried up and got them ready!  I don't have photos yet, but two are completely done and a third is about halfway done.  I think many of the ladies who brought nothing didn't intend to stay long, but found us having so much fun, they decided to stay a while and I was glad for the help.

Then, on Wednesday night, I had figured out the layout for my Candy Bracelets blocks, numbered the rows and carefully picked them up.  It was fairly easy to just sew them together at that point - it didn't take much space (and I had little, as I was sharing a set of three tables with about 7 people!) - so by the time I went home Saturday evening, I had a top - minus borders! 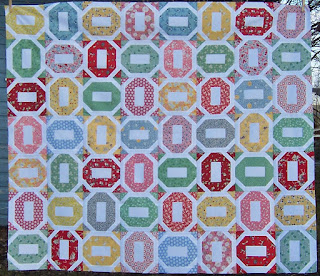 I have to decide how to border it (go with the pattern, or change it up) and I'm not sure where this quilt will end up, but it made a small dent in another of those sets of pre-cuts I bought without a plan.  I really like it!

Since I finished this Saturday just before I left, I had little left for Sunday and came home and cut out 13 red cats to work on Sunday.  Other than a few mishaps with my "filing" system (each set of cats parts was layed out between pages in a book and folks kept picking it up because apparently my table was a touch-and-see table at the show?), I got all 13 cats sewn... 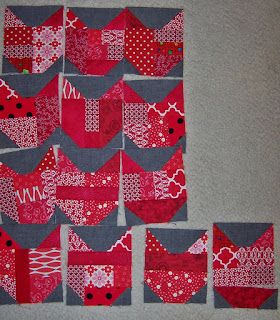 The two on the bottom right need a little surgery.  One has a too-small piece, one has a too-large piece.  I didn't have anything extra with me, but by the time I finished these, I had about 15 minutes to clean up before the show was over, so it worked out okay.  I probably would have gotten them done sooner, but Colette's hubby was there and NOT helping the overall silliness at our table...I laughed so hard I couldn't breathe and was crying at least a few times, but it was great fun.  I just hope we didn't scare too many visitors!

Tear-down was crazy and hectic as always.  By the time it was over I was ready to be DONE, so thankfully it was done!  Much of the stuff is already stored in my garage and attic for next year, quilts have gone home with their owners and even the floor was thoroughly vacuumed by our infamous Bill!  You probably wouldn't know there were nearly 70 quilts hanging in that little room in our little library all weekend unless someone told you and that's just fine with me...probably the folks at the library as well - they don't want to clean up our messes!

I have tomorrow off work also - a recovery day - so I can get the things taken care of that I usually fit into the weekend.  I will probably fix the cats so that monthly job is done and then sit down and seriously figure out how to quilt my APQ swap quilt.  The next two weekends have at least one birthday event each weekend, and this month is flying by, but I'm determined to meet my UFO Challenge goals, too!

Amazing quilts, congrats to everyone! Is the little house in the fifth row, second block from the left? Great quilt! Your quilts look wonderful, too. Love those elephants and Christmas Pickle is just amazing! Isn't your martini glass quilt on the wall there, too? I'm really liking Candy Bracelets, too, the colors and fabrics are so pretty. Sounds like you had a lot of fun with your friends. Take it easy tomorrow, fix those cats and have a nice quiet day!

Sounds like everyone had a lot of fun, but I know all of you are worn out! Shows do that to you! Lots of fantastic quilts there; I'd hate to be a judge there! Your Christmas Pickle quilt is one of, if not, my favorite! With all the sewing you did while there, I don't know how you had time to take pictures, but thanks much for sharing! ---"Love"

Congratulations on your guild's successful quilt show! Thank you for the quilt tour as well. What amazing quilts! I don't know how you managed to get all that sewing done with so many distractions (good ones) - you are amazing.

All of the quilts are just amazing. I am so impressed with the work that went into the quilts and then into organizing the quilt show. I love your Christmas Pickle quilt, too!

Wow! Congratulations on a successful show. There's a lot of talent in your guild! The variety of styles is fun to see. Love your Candy Bracelets quilt.

That does look like a nice show. :) Love your pickle dish - I've always wanted to make one.

What a great show! I loved so many of the quilts - too many to list. It's neat that you have a "work" table so people can watch you doing what quilters do. I repeat - I wish I could have gone.