Last night around 7pm, my boss texted me - no power at work.  We'd had two days of 50+ mile an hour winds (yesterday was worse), but by that time, the storm had calmed some and I thought we were in the clear.

We have power at home - total power, not just generator-provided - but only a few outlets working at work.  (No idea how THAT happens!)  And no internet, no phones - basically enough to make you frustrated that you can't actually do your job fully.

So I'm not required to be there, though I've offered.

What's a quilter to do with a WHOLE, unplanned free day?

First, because I'm going to a one-day quilt retreat on Saturday and cutting and pressing space will be limited, I've been working on cutting fabrics for a few projects.  Earlier this week, I cut squares for my Candy Bracelets quilt. 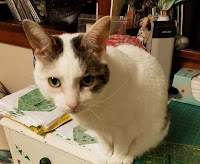 Emma "helped" - you can kinda see what I was doing in the corner there, but otherwise I didn't take photos.  I was too busy defending my cutting table and trying not to amputate her tail!

So today, after laying in bed doing math while trying to fall back asleep after my alarm went off at 4:30 and I confirmed that we still did not have power at work and there was no reason to go in, I realized this would not keep me busy the whole day.  (Well, duh!) 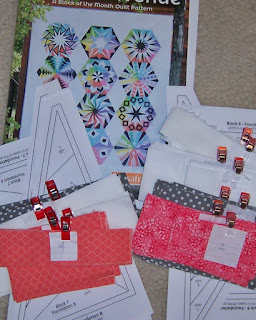 These take a chunk of time, but are good at retreats, as they are fairly assembly-line friendly.  (And that fabric on the right looks way pinker than it is in real life!)

When pulling reds for this month's rainbow scrap challenge, I found a strip set of red and white leftover from a quilt.  And then, as my cutting table gets cleaned off (little by little projects that have been stashed there are being finished!), I found hiding another strip set of pink and white.  Same size strips - how lucky is that???  With a few more pieces, I was able to piece this dolly quilt: 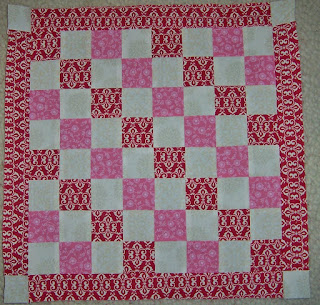 I'm excited to have another little quilt made from found bits in my stash (like the green triangles last month), but now I have FOUR dolly quilt tops!  Uh oh!

Well, let's baste those!  The boss has been texting and has confirmed that there is partial power, but not enough to run tests, and help with other (non-Katie) tasks is coming, so I'm still off the hook.  (But still offering!)

I dug through my stash to find suitable backs (I love those trimmings from larger quilt backs!) and binding fabrics.  In addition to spray basting the quilts (no photos, sorry!), I made binding for all four! 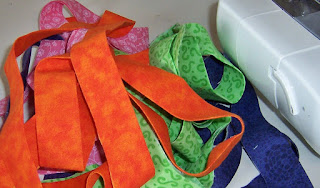 How's that for productive?

Also this week, I may or may not have cut six more blocks for the block exchange box I have this month.  I found out it will take 64 of those units I showed.  If we all make her just one?  Pathetic.  Before I decided to cut, I found out the box-owner will not be at the retreat Saturday, so if I cut those, I'll have another project to work on Saturday.

And I chopped up and resewed the back fabrics for the APQ swap quilt. 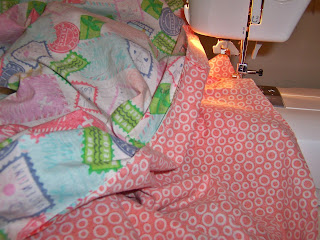 Last night, after I heard there was no power, I thought maybe I'd try to quilt this today.  I don't have an idea of how, but if I got out the batting to relax, I'd be on the way.  And then I forgot to get the batting out.  Oh well - it looks like I didn't exactly waste my day and this wasn't slated to be done yet anyways.

Right now I'm making lunch (the delicacy known as frozen pizza...) and after lunch I'll probably go back to the sewing room.  I may quilt the dolly quilts.  Or I may make a block for a guild member who moved away in, oh, September of last year...they handed out a piece of backing fabric and a pattern to anyone interested in making her a going-away block.  That got buried on the cutting table too, and resurfaced just a few weeks ago.  I hope she hasn't put the quilt together?

In non-quilty news, our property did get a little damage from the high winds...

We live in an old (100+ years) farm house.  We have a rickety old garage.  It had an even shakier carport on the side of it.  Last night, the east edge (far left corner in the photo) tin roof was flapping some and part of the support directly under that part had snapped off.  We were a little worried, but I figured it would be okay and we went out to dinner.  It's been there THIS long, right?  We returned home from dinner a few hours later and found this: 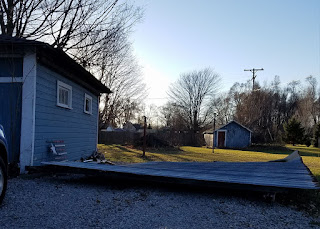 Thankfully, this is all the damage.  We still have power (though we cut power to the garage just in case it followed the carport down overnight), none of our vehicles were damaged and even our huge trees (not really seen here) didn't shed too many branches.  We fared a LOT better than so many and we're so thankful.  I'm sure we'll have a grand time with the insurance company, but we have insurance.

Now it's time to go eat my pizza, give Emma some snacks (so she doesn't try to help me eat my pizza in the fashion of putting her face between me and the pizza) and see what else I can accomplish.  Unless the boss texts and says she wants my help.  (Working with no power is kinda like camping, right?  Fun for a little while...)

Happy quilting,
Katie
Posted by Katie at 11:53 AM

Oh, man - that's the carport? Flat as a pancake on the ground? :( Looks like you got a lot of great prep work finished already today!

Yea! A bonus sewing day, what could be better! Sorry about the carport though. Hope the insurance isn't too big a hassle with the claim. You have gotten so much accomplished. The back of the swap quilt is a big one all by itself, The fabrics are so pretty. Lots of cutting going on. The dolly quilt is very cute. Binding prepped. It's been a busy day!

Relieved to learn that you were mostly spared from the wind storms. The footage they show here on tv is heartbreaking. I can't imagine how you deal with you home being demolished. Emma is such a sweetie to help you with all your quilt jobs and eating pizza. You've certainly made good use of your unplanned day. Have fun at the retreat!

Glad you didn't have more storm damage than you did, and that no one was hurt. It could have been much worse! Looks likk you are maintaining your sanity through it all. You're getting lots done seems to me. Have fun at the retreat; you're goig in well prepared! ---"Love"