the projects from Thursday...

After I posted on Thursday, I was still getting the go-ahead to stay home, so after I ate lunch, I went back to the sewing room for more play time!

First I made a block for a gal in our guild who moved away last fall.  We'd been given a square of background fabric and instructions and were to provide the other fabrics in colors of our choice.  (I should have taken a photo...silly Katie!)  It was due in June of last year.  I knew I had it way back then, but time got away from me.  And since then, I've kinda known I had it, but it was kinda buried, too.  Buried enough that I could kinda ignore it.

Thursday afternoon, it wasn't so buried any more.  (So much for my efforts at finishing things...look where it gets me!)  So I decided I'd make the block and send it off to the gal and surprise her.  It's in the mailbox now, so don't anyone tell her yet, okay?  I hope it's not too late to make it into the quilt - the others in my guild thought probably not and got a good giggle at my late finish.

I also quilted the first of the three dolly quilts I made in February.  Today I sat down and finished hand-sewing down the binding. 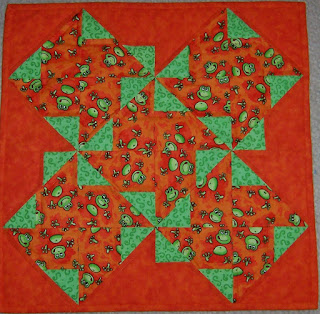 The quilting and binding part may take longer to finish than what I have each month and I'm okay with that.  The top construction is really what I'm aiming for each month.  I may pay for that come October, but since there are three others spray basted with bindings ready to go, it's just a matter of deciding to quilt them.  They don't take long, as I quilt them simply.

Saturday was the one-day quilt retreat/fundraiser.  What a blast!

Next, I pulled out the Candy Bracelets blocks.  All I had left was to sew the last set of lost-square triangles onto the corners of about half of the blocks.  In my prep on Thursday, I'd cut the squares, so other than drawing the diagonal line as a sewing guide, I was ready to roll.  But it seems every time I get rolling on this project, something comes up.  I was hoping Saturday wouldn't prove another false start. 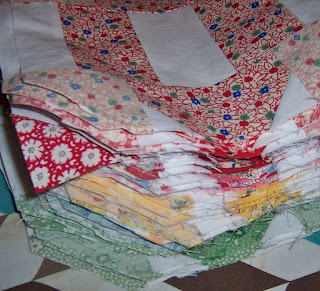 It didn't!  I finished sewing on all the corners about the time everyone was packing up to go.  I decided it was a good stopping place for me, too.  I couldn't be happier!

Tonight while watching some Netflix, I trimmed all of the lost corners and now they're ready to press.  (Emma kept looking in the bucket of trimmings like it was something she needed to be a part of...that cat...)

You can see in the photo there is one block that has been pressed open.  The finished blocks look like this: 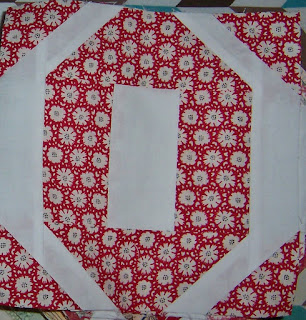 ...and they alternate directions.  Once they're sewn together that white on either side will be skinnier and it should be the same width all the way around the center "O" shape.  At least I sure hope so!

Next up is to lay these all out and decide where each should go.  I think this might be a good project to work on (sewing rows and then into a top) at my guild's quilt show next weekend.  In addition to quilts hanging, we have a few workstations where we sew.  It generates a lot of conversation from visitors, but I need something that doesn't require lots of cutting or pressing, as things that are hot, sharp and/or require cords should probably be limited!  (I wanted to take my red rainbow scrap challenge cats, but it's probably better I don't!)

I'm a little frustrated with myself on this project, though.  In trimming those lost corners, I realized I used the same green twice.  It's in the stack twice.  I looked at all the fabrics.  I washed them.  I pressed them.  I refolded them.  I cut the block pieces for them.  I sewed the blocks.  I pressed the blocks.  I cut the lost corner pieces.  I sewed the lost corner pieces.  Never during that process did I realize I'd used the same green twice.  It doesn't really matter, and there were quite a few fabrics between each of them in the stack to distract me, but I feel quite foolish for not noticing!

Tomorrow is back to work for me.  I went in Friday after sunup and managed to get my equipment hooked up to the outlets that had power (we had partial power and it was strange which outlets and lights worked and which didn't...it seemed there was no rhyme or reason, but I had quite a few functional outlets in my area (though no lights - I took the clamp light from my bed to work with me!) so that was nice) and figured out we just had to plug the phone and internet stuff into a functional outlet to get that working.  I plugged in some space heaters and started the one test that really needed to be run.  It takes 35 minutes.  At 33 minutes the power went completely out!  Thankfully, my computer and the machine that was reading the test are both plugged into a 5-minute battery backup, so it finished.  I had to do some quick thinking to get the results to save on the desktop (because no internet again, so no network!), but I consider myself very lucky.  Otherwise, we'd have been calling customers on personal cell phones and apologizing and offering free testing!

The power came back on around noon - the complete shutdown was due to repairs taking place nearby, which meant full power was coming!  About this time, we'd done about all we could with no power and had decided to go to lunch as a group.  Despite the power returning, we went anyways.  It was a nice time to bond as a group and gave the building time to warm up.  It was a late evening taking care of a lot of odds and ends when we returned, but unless something went wrong after I left, Monday should be closer to normal for our troubles.

The next two work weeks will be shorter for me - I have Friday this week off to help set up the quilt show and the following Monday to recover (it's Saturday and Sunday).  It sounds great, but I know I'll be busy both days.  I'll try to remember my camera so you can enjoy the quilt show with me, but I promise nothing!

A marvellous newsy post. You always have lots of interesting projects on the go and it's fun to read about their progress. Don't worry about the double up on the green. I doubt anyone but you will notice. Good luck with the quilt show, I'm suer it will be a success.

That's a very long time for the power issues at your work! Hey - the duplicate green bracelet block could be like a 'Where's Waldo' thing - a secret bonus if someone looking at the quilt figures it out. :D

Hope all the power problems are settled by now. That first red/green quilt is fantastic! I don't remember ever seeing pinwheels being made that way! I love it! Lots of work in the second stack of blocks too. Slow down, girl; don't wear yourself out! ---"Love"

The candy bracelet will be pretty and I'm sure you will be the only one who notices that one of the greens is in there twice! I can't imagine having the power out that long at a work place. Makes it impossible to get anything done. But nice that you had some days off! I would love to come to your quilt show. I do plan to go to one on Saturday that isn't too far from home. It's been a while since I've been to one, so I feel the need to go. LOL!

First of all, you are so darn busy that it is hard to keep up! Can I say that I love the Candy Bracelet blocks. I think I have a whole bag of similar fabrics, somewhere. I should make a list of want-to-make projects. My knees should be good to go in a few weeks. I hope you have seen the end of the crazy, windy, no power weather. Our winter has been wild, too. Just waiting for spring now, and for a chance to get my hands in some dirt.

I love that frog fabric, it is adorable and made such a cute little quilt! I'm glad you had some bonus sewing time, but I'm sure the power outage put you behind at work. Candy Bracelets is looking good, lots of blocks in that stack. I don't think anyone but you will notice the two greens, just stick them at opposite ends of the quilt. Will be watching to see what you get done this weekend.