Another month has begun, so another month of challenge assignments has me scrambling and scratching my head, but also excited!

The UFO number for the month is #5 - that's my APQ Blog Buddies Swap Quilt! 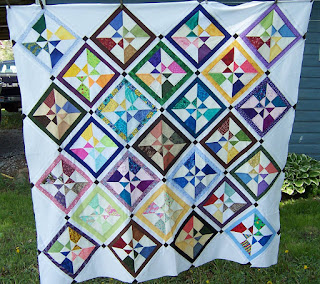 I've added a skinny black border and then a wider, funky floral print border a while ago.  (Sorry, too dark at this point for additional photos.)  Probably not long after I took this photo.  But into the Closet of Shame it went at that point.  I was one of the first to get this together as a top from my swap-mates, but a few of them have put me to shame with having finished their tops entirely since then.

It's about time this one got quilted and finished and I can show it off, so onto the list it went.  It's another that I cringed a little when I saw its number come up, but I want it done, so now I just have to figure out HOW!

Today the hubby and I trekked to see my parents.  They'd purchased a new dining room table and chairs and we have a truck...  While the boys loaded the new set and set it up in the house and hauled the old set to Goodwill, my mom and I stayed well out of the way - fabric shopping!

I chose these fabrics for the back of my swap quilt: 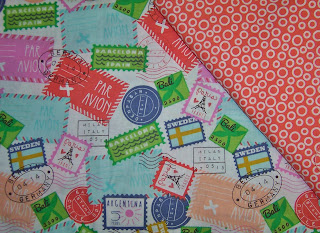 The quilt measures 80"x80", so I needed about 6.25 yards for the back to be big enough to make it easy to longarm.  The stamps fabric - end of the bolt - was only 5 yards.  That's okay for MOST of the quilt, but I knew I needed a bit more.  And you all know by now I have a dot problem, so when I found the peach that matched AND had dots...well, that was the end of the looking.  (Despite my mom's efforts to keep making suggestions!)

There were so many fabrics to choose from, but I love this one because it reminds me of travel and these blocks travelled from all over the world to my mailbox to make this quilt, so I think it's perfect!

But I also found this: 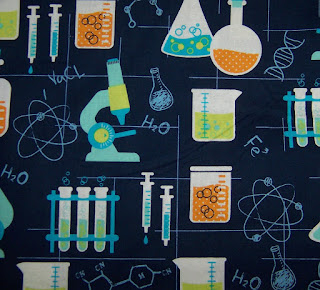 I bought the end of this bolt, too, about 7 yards, assuming it will be enough for my science geek quilt.  While the front is lime green and orange and grey - and this is a bit darker - I couldn't pass it up!  So I'll be ready when that number is called - all the fabrics have already been through the wash!  (I think I've set a record for number of loads of laundry washed here this weekend - I think after these two I'm up to seven!)

And then there's the Rainbow Scrap Challenge color - RED!

I don't love red, but it's a staple color, so I have a fair amount.  I first pulled my stash pile of reds.  And then I decided that the VERY messy box of strips that were too wide to toss out, but too narrow to leave in the stash NEEDED to be sorted.  It was a mash-up of flannel scraps, leftover block parts and strips.  What was I thinking?

So I sat down on my newly vacuumed floor (thankyouverymuch to myself for cleaning the house Friday night while the hubby went to see a silly movie with our nephew!) and sorted those strips:

None of the piles are huge (though pink seems to be towering over the others?), but they're sorted.  Not pressed and tidy, but sorted.  (And I decided that the flannel strips - not large enough to back a dolly quilt - should be tossed.  GASP!  Yep, I threw away fabric!)

These were all mashed into a single shoebox.  I decided they needed to be in their own shoe boxes until their color comes up.  Off to gather all the shoe boxes I'd been hoarding for a few years... 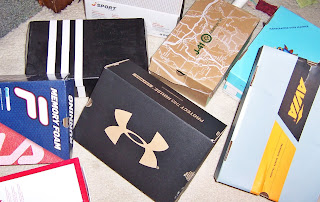 Don't judge me.  These are truly a collection from a few years of collecting.  And they're not ALL from MY shoes.  But what I do buy, I often actually wear out due to my job! 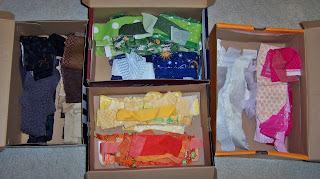 And the final destination of the leftover strips will look like this: 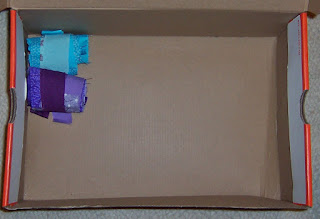 This is after I've made string blocks and cats.  And decided which pieces are just too small and purged.  (I donate scraps of cotton fabrics to Charitable Union through my guild and they sell them - we're not sure where they go, but some have theorized paper-making?)  These will hang out and be the start of new string blocks since I'm trying to not use the same fabric twice in those blocks.

And where's the red you ask? 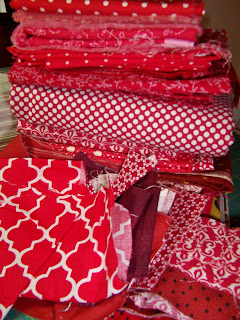 Now I'm ready to sew some cats.  And maybe another of those dreaded curved blocks (in red) for the block challenge.  She said she needs 64 of those units that I made...four of those units makes a block.  I don't think she's going to have enough for a quilt even if we all make four - there's only about 10 of us participating, but I guess I can maybe make one or two more...maybe...

Next Saturday I have a one-day quilt retreat, so I think this coming week will be more about preparing for that (deciding what I want to take!) than sewing, but we'll see.  This month has a lot going on each weekend...the following weekend is my quilt guild's annual quilt show and the weekend after that we celebrate a nephew turning 3.  But I'll get some quilting in and try to blog about it, too!  I gotta make those challenge deadlines!

I wish I only had to quilt a top this month... noooo, I have to finish the top first. Haven't looked at it lately so don't know how much is left to piece - hopefully not a lot. I like that swap quilt and REALLY like the backing you chose for it :).

Don't feel any guilt about the swap quilt. Took me ages to finish mine. You've chosen terrific fabric for the backing. Fancy finding science themed fabric. I'm sure if you went looking for it you'd never find it. I have more shoe boxes than that and have to admit all the shoes are mine! Colour sorting your scraps and being ruthless about what can't be used is a worthwhile exercise. You have plenty of reds to work with for RSC. It's fun seeing what everyone makes with their scraps. Lots and lots of inspiration. Good luck with that curved block.

Perfect fabric for your swap quilt backing! And the science geek backing couldn't be better. Look at you, thinking ahead! I dug into the scrap bin to pull out my reds last night. I also have a few bins of fabrics cut into specific size squares and rectangles, from those two years I thought I could stay ahead of the scraps and actually use them that way. Sad fact: I haven't made anything with any of those cut down scraps, and I'm back to just tossing assorted sizes and shapes willy nilly into a (bigger) bin. However, RSC is making me at least rummage through the boxes once a month and take an infinitesimal bite out of the contents!

Your APQ swap quilt top is so pretty! That was a great block pattern, and everyone's quilts have been, or will be, so very nice. You remember I begged off, but made my own with all you APQ bloggers' names on my spool pattern quilt. I need to get that out and display it again. Good on you for getting those scraps color sorted! I need to do the same thing! ---"Love"

I'm so glad you are going to get your APQ swap quilt finished! I really love mine and have it hanging over our couch right now. It was a great block to make. The backing fabric is perfect! I have tons of scraps and have a chest with 9 drawers that I have sorted colors in 6 of the drawers. I bought it at a garage sale for $5i.00 and have an ironing station on top of it. Of course I also use the space to pile fabric and projects on, so I have to clear it off if I need to iron something big, like a top or backing, which I will do today - a patriotic donation quilt for a veteran. The middle three drawers are a conglomeration of larger pieces of fabric - some of which I but out of a scrap chest at the LQS. Some of those pieces are a decent size and I also have a cagillian 4-patches that were planned for donation quilts a few years ago and I still have them. Have fun on your weekend sewing day!

Can't wait to see how you quilt your swap quilt. I like the fabrics for the back, very pretty. It is fun seeing them come together. Mine is one of my favorite quilts. The science themed fabric is a real find and perfect for you. I love red, you have found lots of it. Have fun playing with it making red kitties. I like your way of organizing your scraps, too. Mine are in plastic baggies, sorted by color and stored in my machine travel case. I need to go through them and cut some of them into usable sizes. Hope you have lots of time to play with all that beautiful fabric.