turn off your stitch regulator (and i met Angela Walters)

Part 1:  I was 19.  A sophomore in college.  My high school friend, Sarah, called me.  "Sit down" she said.  I sat.  She was pregnant.  Long story short, this was not good news, but she was keeping the baby.  I'm sure she was terrified.  I just wanted to give her a hug.

My mom had been quilting a few years by then, so I decided that we were going to make my friend a quilt.  To tell her that I supported her decision.  This was my first.  This is where this all started.

We made a snail's trail quilt.  Not a two-color one.  But an approximately 100-color one.  (okay, maybe I exaggerate a bit...)  My mom sewed, I unsewed and pressed and matched things up wrong on the design floor that I handed to her and she sewed wrong so I unsewed them again.  It was done before Kaelyn was born.  (whew!)

Our lives led us in different directions and we've lost touch more than once.  She married the baby's daddy and had two more kids with him.  Those kids got quilts, too.  Easier quilts.  She divorced, stood in as mistress of ceremonies at my wedding and then remarried a few years later.

But you know what?  Sarah herself never got a quilt.

Part 2:  Ever since my grandmother passed away, my mom and her siblings have hosted family reunions.  Without parents to host holiday stuff, the kids weren't getting together regularly, so each year a different sibling hosts.  This year it was my Uncle Mike's turn.  Uncle Mike lives in Kansas City, Missouri.  He planned the reunion for last weekend.

My mom has two living sisters.  Both are quilters (it's all my mom's fault), both have longarms.  Aunt Laura looked at a map and went "hey, Angela Walters has her studio and store really near there!" so she contacted her and scheduled us a longarm class.  With Angela Walters.  Yes, that happened.

Then the hubby's work said NOPE you can't have that time off.  So I asked a friend who longarms to do the road trip and class and reunion with me.  She said yes!

We drove to Kansas City.  That's the furthest I've ever driven (I've been further, but as a passenger only), but we had a blast.  We stopped at a welcome center in Hanibal, Missouri (home of Mark Twain and an awesome quilt shop - The Hickory Stick) and the super super super nice folks there told us about a quilt trail.  Also known as a shop hop...across highway 36.  Well...that's how you get to the Missouri Star Quilt Company, so we're going that way anyways!

So the trip took a bit longer than expected (no biggie, we had time) and we saw some very back roads (thanks GPS!) and met some very, very friendly shop owners and found a few really awesome shops.  We also did make it to the Missouri Star Quilt Company - go if you have the chance - but it was overload for my brain!  (But, hey, I've been there!)

Anyways, we made it to the reunion safely.

Saturday morning we headed out for what should have been a 40-minute drive for our class.  Well...GPS did it again...we saw parts of Missouri I'm not sure the locals know about, but with 4 others in the car (and at least two phones turned on to guide us), we made it.  We laughed a lot and were only about 10 minutes late.

She has machines set up for classes to use (duh), and she encouraged us to keep the stitch regulator off just to see.  I was scared, but what good is a class if you don't stretch yourself?  Well...it's not so hard after all!  Go turn yours off if you have it on.  You'll be amazed.  For real.  You can do it.  You'll be better than you think.  I promise.

But I think what got me the most was seeing her work.  Up close, in person and in the books I purchased where motifs are highlighted.  She's not perfect.  She doesn't claim to be.  And it made me realize that I don't have to be perfect either.  Roll with what happens.  Incorporate the mistakes into the design.  It's all okay!

Did I mention Angela is awesome?  We laughed a lot (of course, that happens a lot wherever I go...I threatened to ride a bolt of fabric down some fairly steep stairs at the MO Star because we didn't enjoy hoofing it UP the stairs...they laughed and said they wanted photos if I did it!...they didn't mention the elevator, though...we found that ourselves...hmmm...) and had a ton of fun.  All of us.

The hubby beat me home (his normal shift gets him home around 2:30) and was glued to the television.  Watching the pre-show for the Mohammed Ali memorial.  He wouldn't even grunt at me.  I know this was a big thing, but we have a DVR and it's a BEAUTIFUL FRIDAY!

So while washing dishes and trying to be productive while waiting for the hubby to take me to the promised dinner at a new taco joint (which was delicious, by the way), this quilt started screaming at me from it's hiding spot in the closet. 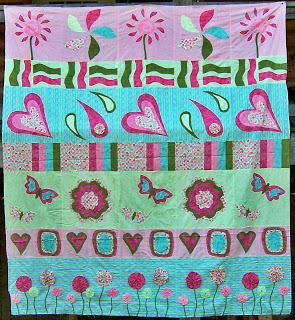 I don't know when I bought the kit from JoAnn's, but it's called "Simply Sweet".  I loved it, bought it, sewed it and then went "Now what?"  It's been hiding out for probably 5 or more years now.

At 4pm on Friday I knew.  This quilt was for Sarah.

And I guess the hubby's delay was for a reason - I had to realize this quilt needed to be finished (the photo above is the top), measure it and look it over so while we were in a bigger city, I could pick up backing and batting.  It's about 80"x90".

Saturday morning I was up at 7am, piecing the back (bleh - I think that's my least favorite part) and getting started.  By lunchtime I had it half quilted.  By bedtime, I had it all quilted and the machine part of binding sewn on.  I even went to a 4-hour dance recital in there (the nieces did a great job!)...

Today I hand-sewed down the binding.  It just needs a label.

Sarah's birthday is tomorrow.  This is not intended as a birthday present.  It's the hug I never gave her all those years ago. 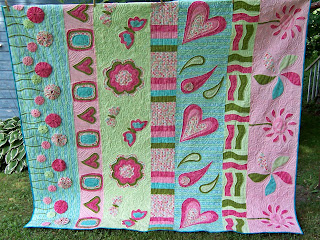 the finished top
yes, it's sideways - it's still too long for my clothesline
(click on it to see the quilting!) 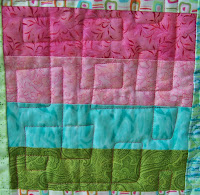 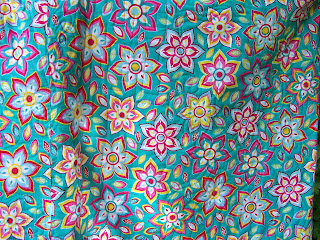 and the back...because a quilt isn't complete from me without a crazy back!
(the flowers are just a bit bigger than my fist)

Part 4:  This whole thing was quilted with NO stitch regulator.  The longest stitch is probably less than 1/4" long and those were the straight stretches where things were easy and I forgot to stay steady.  (They didn't last long - I caught myself.)  My inner points are pointy and the stitches coming out of them are more even than they ever will be with a stitch regulator that's trying to keep up with me stopping and starting.  I relaxed.  I wasn't trying to baby the stitch regulator so it COULD keep up with me.  I was in control of the steadiness and it was easier.  I really did relax.  I now understand how a person could quilt something to death.  You just want to keep going!

I will never (probably) turn my stitch regulator back on.  I don't need to.  I'm good enough without it.  So are you!  And I'm 100% confident saying this to ALL of you.  I tried a machine I was completely unfamiliar with in a city hundreds of miles from home under the watchful eye of a world-famous longarmer and did just fine.  You all know your machines.  If I can do this successfully in such an unfamiliar place, you can do it at home with your machine!  Try it.  Maybe you'll hate it, but I bet you won't.  And at least you can say you've tried it.

PS Angela is awesome!
Posted by Katie at 7:59 PM

Lucky you! What a fun trip! For sure, you will never forget it, and Sarah will love her beautiful quilt made by a life-long friend! You did a great job on it. I'm glad you shared your tip, but unfortunately, (or maybe I should say fortunately), I've never had a stitch regulator. Now I won't ever think I really need one. ---"Love"

Sarah's Hug is a beautiful quilt! I enjoyed reading about Sarah and her family, and loved your reunion, road trip and learning to let go story. You have a way with words as well as fabric. Maybe it is time for me to let go of my stitch-in-the-ditch and straight line quilting obsession.

Great story. Great quilt. Great quilting. I still struggle with my long arm. I will turn off the regulator and just be free.

Smile. You did a great thing today. Not just for a friend, for yourself and all us hesitate ones out here.

You are definitely getting the hang of your longarm! The quilting on this quilt is fabulous. And Angela sounds awesome :)

YAY Katie! You had a GREAT break from work- got to take a road trip, go to MSQC AND meet/take a class with Angela Walters!!! That should take care of this year's bucket list LOL. I LOVE Sarah's quilt; so cute and cozy looking; hope to see it in person Thurs. night :)

What a fun post. I love Sarah's quilt and the amazing free motion quilting! Without a stitch regulator. I really would have enjoyed seeing you ride a bolt of fabric down the stairs. :)

The quilt is awesome!!! I have one of Angela Walter's books and use it for inspiration a lot! That was a great opportunity for you. I would love to have a lesson with her.

You are so sweet! I had a blast with you all, so proud of you and the great story!