I don't have a lot of photos to show.  I haven't done much.  Quilting or otherwise.

...last post was just after my guild's quilt show in late March and I had Michael's quilt top finished...

Michael's quilt is finished.  I sewed the label on today and his open house is mid-June.  It's too windy to take a photo today (of course it is!), but I quilted it with spiderwebs.  Seemed fitting since there's Spiderman in the focus fabric!

I have also completed another top, but it's hush-hush for now.  I hope to share soon!  (I should be quilting it today, but I decided a nap was a better choice - this is not helping my problem!)

I still have not cut into the fabrics for the Bonnie Hunter mystery quilt from last November, but it's on my radar.  I have a week off in mid-July plus a long weekend quilt retreat, so perhaps then?

My guild has issued a Paint Chip Challenge.  I took the info and paint chip and have a great idea for quilt, but it seems the pattern, available back in 2013 has gone POOF on the internet.  I have e-mailed the designer and have my fingers crossed.

The deal: use at least four of these seven colors.  The fabrics I choose must have these colors as predominant colors.  I can add one FABRIC.

(at least they're good colors!)

It's due in October, so I've got time, but at the rate I've been going lately, I'll have it not-done by NEXT October!

And sadly, I think that about catches you up on quilty stuff!

What I have been doing:

- baking cheesecakes (the boys at work have found out I can do this and remind me when their birthdays are...some seem to want to have lots of birthdays each year...the hubby is not amused, but I made him one two weeks ago and it's still in the fridge - WHOLE...I won't eat it because it's no-bake (not a cheesecake in my opinion)..bleh!) 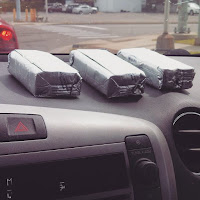 (...and this is what happens when you realize AT WORK that one of those guys has a birthday tomorrow and you haven't bought the cream cheese...good thing for a 30 minute drive home plus errands and a warm day...no, not bricks of drugs...bricks of cream cheese!)

- there was a birthday cake in there for my turning-4 niece, too...just cake-cake 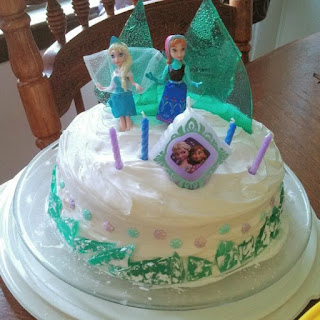 (it stole the show at the party) 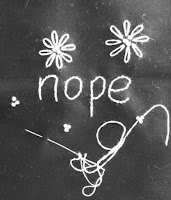 ...another said "bite me" and was given to a coworker who had her last day yesterday...fits her, but if you say it to her, she just might try...

- Kevin joined the quilt guild after his two free visits 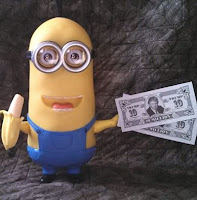 (yes, that $$ has Trump on it - we have a board game called Trump that's YEARS old and this came out of that box...I don't care if you support him or not, this is funny)

So I think that's caught you up.  I'm going to try to take more photos and be better about blogging, but I keep promising and then don't do it, so I guess you'll get what you get!

Now it's time for me to go catch up on all the blogging you've done and I haven't been reading...

It's so good to see you are going to be blogging again, my Friend! Reads like you've been pretty busy with life and some quilting; looking forward to seeing pictures soon. I looked back a long way through my e-mails and blogs, and was reminded that we've been "bloggin' buddies" for many years, along with several others from our old APQ group. Hope we can keep that little group going for many more years. I've missed you and several of the others. Hope you make time to blog more often; I need to do the same! ---"Love"

:D Looks like breaks from blogging is in the air this season. Been absent here, too, for a few months. I'm doing a little catching up and re-engaging with quilty sociability. Hope your summer is going well! Did you hear back about that pattern you're looking for?