At my guild meeting week before last, a group project was announced - a Row-by-Row quilt.  I've participated in one of these in the past (a long time ago) and had a lot of fun, and I'm always up for a new project (particularly one that isn't terribly demanding), so count me IN!

The following weekend was our guild's sewing weekend and I chatted with a few friends about my ideas.  One in particular was less than appropriate, but had a few friends giggling.  Unfortunately, it would probably have left others terribly offended, so it was quickly abandoned.  I left still scratching my head over what I would do, but determined to have an idea soon because I had only two weeks to complete my row before "the box" needed to be passed.  (We lost a week due to weather cancellation...)

Sunday evening, ideas were still churning and by Monday afternoon, I'd figured it out.  Modern-wonky blocks.  In solid colors.  I've done a little with wonky, and fear a little that this will over-challenge some members, but I hope most of those who participate and get my "box" will learn something...and isn't that the point?  I just hope they don't hate me by the time it's over - at least not for this!

Monday I purchased fabrics at my LQS.  Solids there were CHEAPER than JoAnn's.  Better quality AND she's got everything in the store 30% off through the end of the month to make room for new inventory.  (I helped even more by purchasing the last of a bolt!)

Monday evening, since the hubby was down with a stomach bug, I had freedom to sew.  So Pinterest and I worked together and found me a tutorial for making a wonky churn dash... 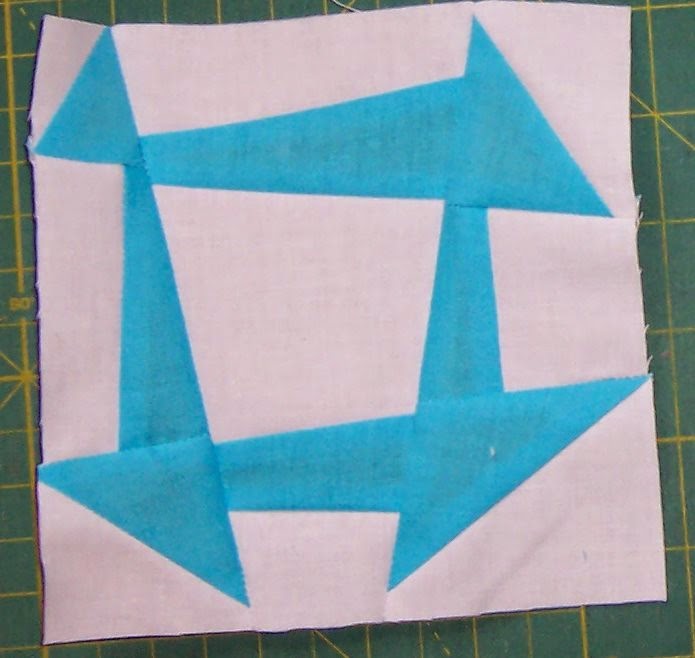 This went okay.  Just okay.  But the pattern didn't specify how big the block was to end up.  And I kinda need a uniform size.  And it's 5 5/8" unfinished.  Not exactly a "normal" size.

A little more searching and reading in the next few days turned up another tutorial (google "wonky block tutorial" and you'll find a lot of options) that was more fussy, but also told me what size the block ended up - 6" finished.

I tried just one to be sure...

Yes, this looks more like the right size.  Though I do like the overly wonkiness of the first a little better, compromises need to be made.

These little buggers are a bit wasteful, but I bought a lot of fabric and I'm learning, so it's all good.  (And there's a guy who recycles our fabric scraps in making paper, so I'll just say I'm helping an environmental cause, okay?) 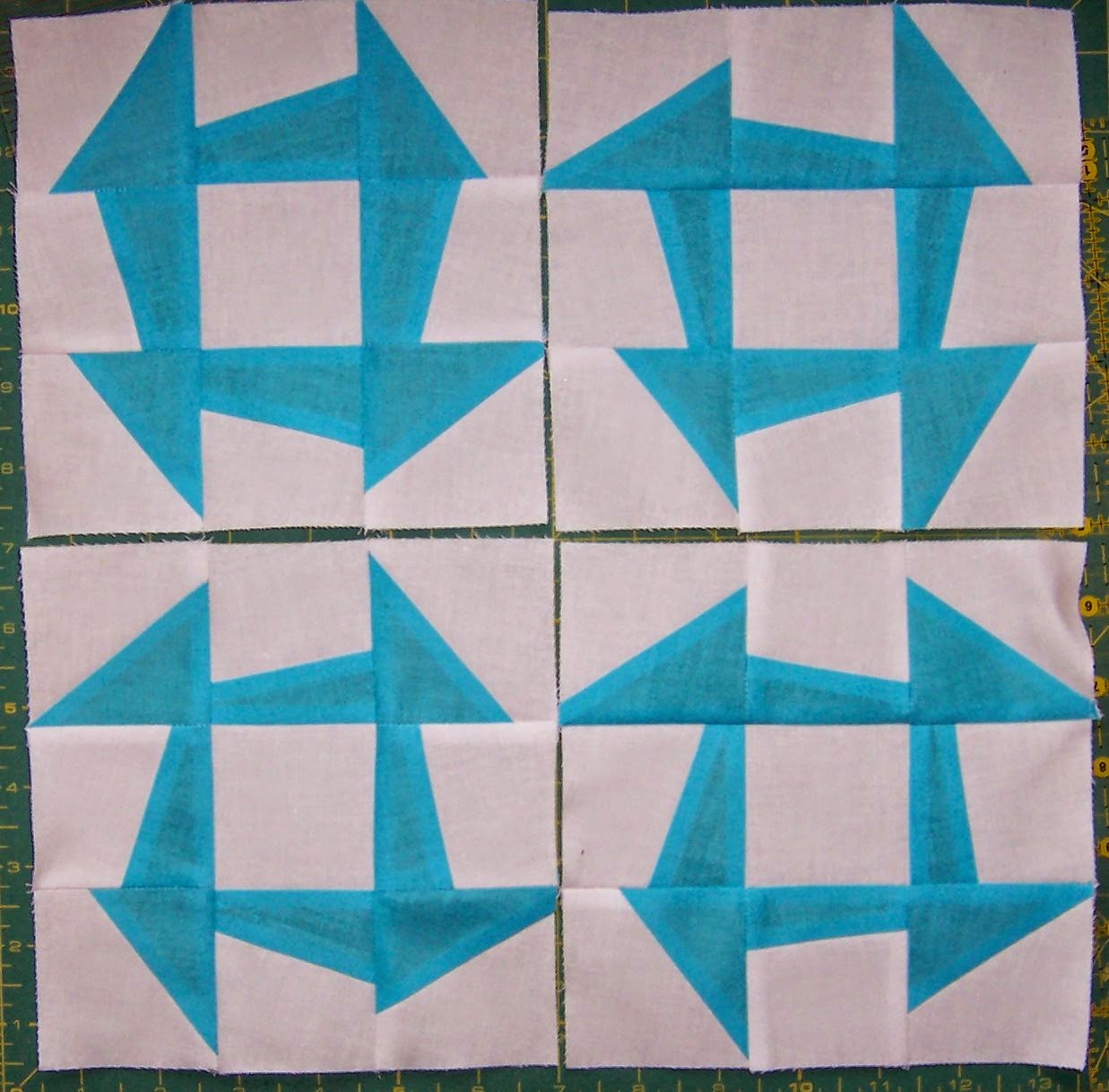 And there's my row.  They look a little more uniform than I hoped, but they're definitely wonky and that's more important.

Lemonade from a lemon for this - this is my first block repurposed.  I plan to have the other 5 quilters who make a row for me add their info on the bottom half.

I also purchased a little journal to include that has the important info about what I want as well as a few entries regarding my trials to complete my row.  I even included a few websites for inspiration and instruction because I'm pretty sure wonky blocks are not in the repertoire of most quilters!  At least not intentionally wonky blocks...

And as I was editing these photos, I was looking for photos of what I finished at my sewing weekend last weekend and realized I only took a photo of one quilt top and it's on my phone.  That will take about 3 days for me to get it successfully off there, so I'll just have to wait for a sunny day (this is not one of those, unfortunately) and take photos outside.

So what did I accomplish?  The hedgehog quilt is a top.  AND the baby quilt that started it all is also a top!  (That quilt was much simpler and took only about 8 hours to complete - but when you can sit in a room with friends and a sewing machine for most of two whole days, it doesn't seem to take long at all.)

I should have been quilting those this weekend, but this row and a few other obligations and whatnots kept me from having enough time.  Maybe next weekend, but she's not due till March, so I've got plenty of time to procrastinate!

PS  I won't see my row-by-row stuff again until the end of June (or was it July?), and I'm not sure if it would be okay to share the rows I complete here just in case I spill the beans.  So I guess once it's all over, I'll post about them all.  (But know I'll be itching to share as I complete them!)
Posted by Katie at 1:14 PM

I must admit your wonky row of blocks is really cute, and I love the colors, but I must also say I guess I'm just more into traditional blocks for the most part. I guess that defines me as really "old", right? Yes, that (or something else) definitely made me old! It will be fun to see the finished project in a few months. ---"Love"

Saw this wonky block the other day and thought of you straight away! Weird. I've done a wonky star block but it messes with my head (I like the ordered way of doing things). Yours look great and I love the colours. Looking forward to the reveal later this year.

That sounds like fun! Kind of like something that guilds do but you start in the middle and go around - I can't think of what that is called! I thought of you today when I was at a quilt show in Silverton, OR. I will post some pictures in a day or two and you will see what it was. "-)

Love your blocks. I have done one row by row and loved it.

I should try something like your wonky blocks. I've been so "square" for so long...need something different:) Thanks for the inspiration:)
Happy Quilting!!

Love your colors and the wonky blocks. I have a hard time doing wonky. It is something I am working on.
I can hardly wait to see more of the rows.

The wonky row of blocks are really cute! It will be fun to see what everyone else adds. I just got home after being gone for three weeks and looked back through your posts. I love the hedgehog quilt, it is so cute. You have been very busy!