After being so sick before the holidays, I had hopes that I was DONE for the year.

So that slowed me down some.  Partly because I was sitting on my couch, wrapped in quilts (did I mention it was single-digit temperatures with double-digit below zero temp wind-chills most of last week? - my poor furnace!), worried I was going to get sicker.  I know that didn't help anything, but after that last round...

But since I had already cut parts for the remaining 11 hedgehogs, I was ready to roll when I started nose-breathing again.

Saturday I decided to get down to business.  The hubby was watching football, so I had the day to myself...mostly...  By this point I knew the pattern well enough that mass-production, coupled with having the pieces already cut, was possible.  So I sewed and sewed and sewed and sewed.  These little gals seem to take forever to get parts together and then all of a sudden - BAM - you've got a hedgehog.  Well, multiply that by 11 and you see how my day went! 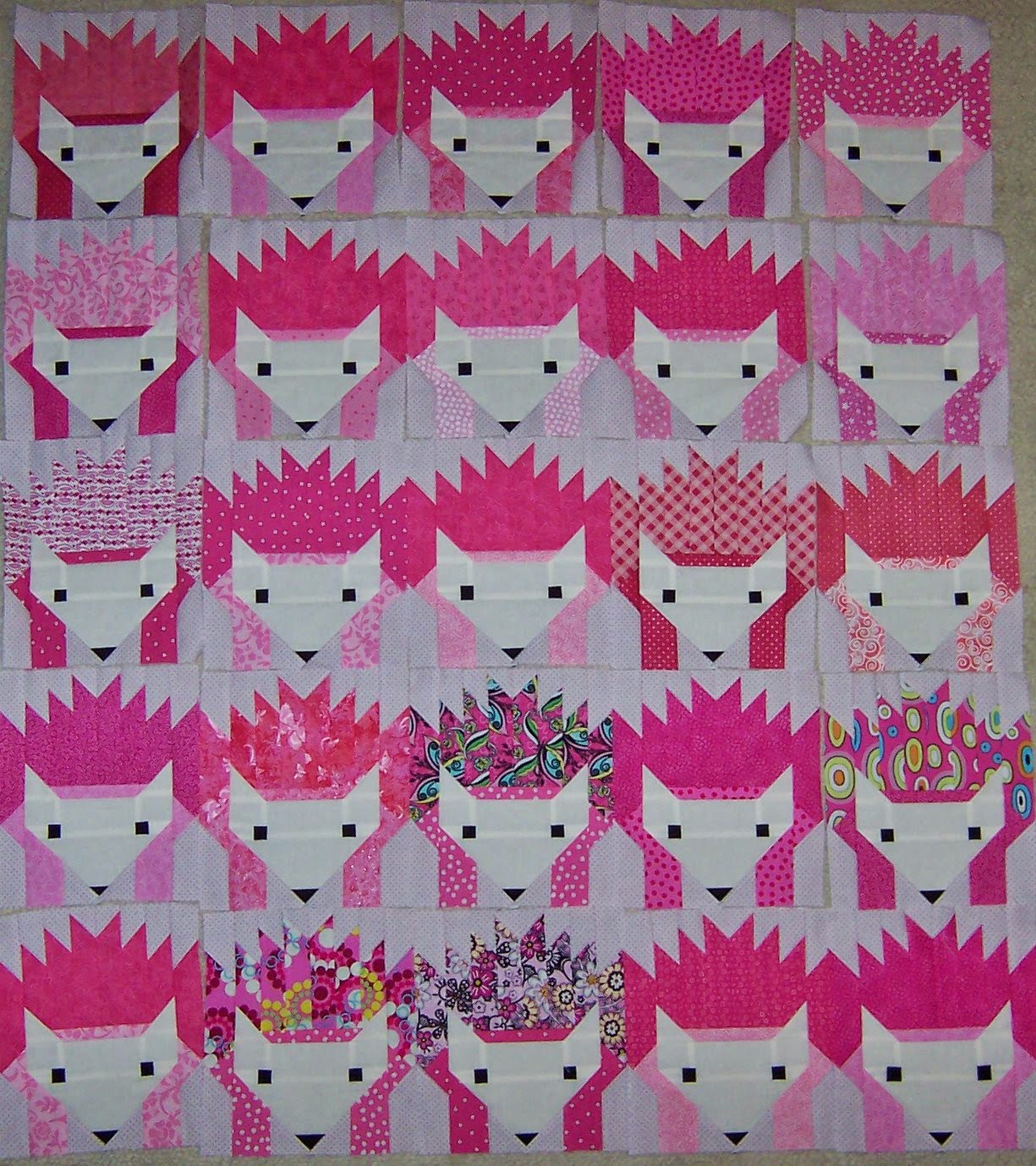 I did not rip a single seam in producing the last 11 of these gals.  There was one mis-cut that was 1/4" too long, so I'm considering myself really lucky.

They will still need to be sashed and bordered, but my quilt guild sewing weekend is next weekend and I plan to figure out the final layout (minus cat-help) and get that taken care of there.  With all that goes on there, it's easier to have mindless sewing to do and then I can chat.

So now it's on to the next project.  The baby quilt!  I opted to work on the big sister quilt first, knowing it was more complicated and more likely to end up in the UFO pile and using the need to get the baby quilt made also as motivation to get the hedgehogs done.  I really want to give both, and this strategy worked.  (But the hedgehogs being so darn cute didn't hurt any!) 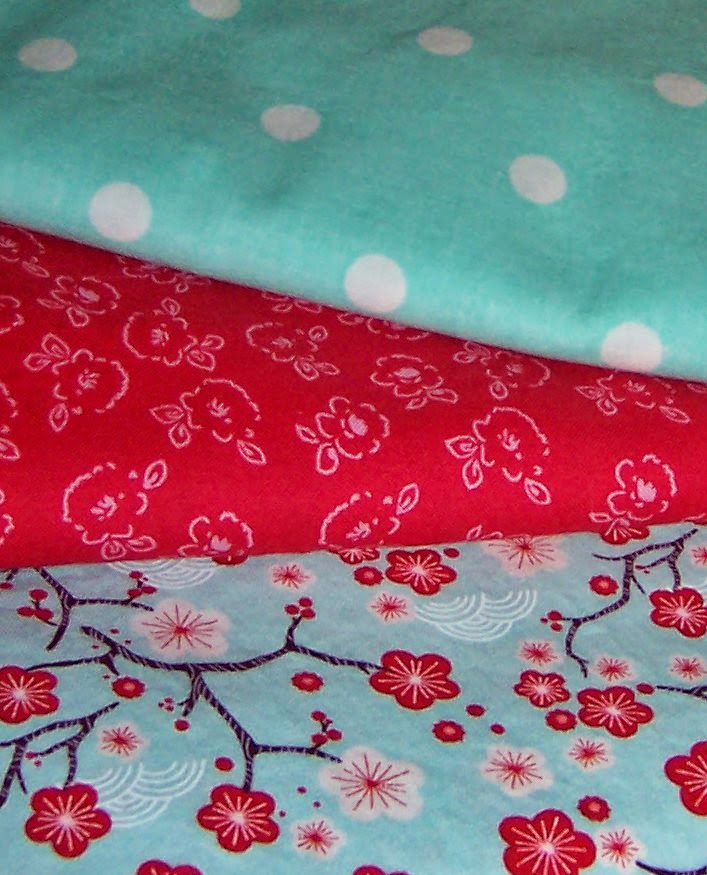 I love these colors together.  Originally, I wanted to do just red and white, but couldn't find a quilt I really fell in love with that screamed at me it was the quilt to make for my friend.  So I expanded to add aqua because I love the colors together.  And then I found Chasing Windmills and knew what I was going to make!

The fabric at the bottom of the photo will be the back of the quilt.  I had decided on a different blue in the store, but when I found the back fabric, I went back and got the polka dot fabric instead.  I liked it better anyways...but you all probably know by now I have a dot problem.

Lastly, lots of folks are doing year-end roundups of all the quilts and projects they've finished this year, but I have a different one. I've seen others do it and thought it would be fun.  I've set a basket in my sewing room and whenever I finish a spool of thread, I throw the empty in there.

13 spools!  That large one started out on my longarm, but I didn't like it much, so it ended up on my little machine.  That was a LOT of off-white thread to sew through.  Some of them I sewed every stitch of thread in 2014, some I sewed about 10 feet and emptied, but I technically finished in 2014, so into the basket it went.  What a lot of thread!  I didn't think I sewed that much, but I guess I did!

Now what do I do with them?  Usually, I throw them out as I empty them and feel no shame, but having them all there together it feels like I should do something crafty with them...  And I want to empty my basket so I can start again in 2015!

(And those fabrics in the background are the start of the 2015 AQS Ultimate Guild Challenge quilt I plan to have done in March!)

I still have the one 2014 finish to share that was a Christmas gift...I promise to share that soon...  I have photos, but this post is getting long.

The dreaded lurgee strikes again! I'm all for swallowing whatever works to wipe it out or at least knock it on the head. Glad to read that you are feeling much better. Working on those hedgehogs would certainly cheer me up! I love the colours of the baby quilt and think I have that aqua dot fabric in the cupboard. Beautiful backing fabric. I wonder what you will make of those spools?

I would have never thought of saving empty thread spools, but that is an interesting idea. If I don't quilt more in 2015 than I did in 2014, I wouldn't have a very big pile! I love the new pattern you've chosen; can't wait to see it finished! (I'm sure that won't be to far in the future.) The hedgehogs are cute! Glad you are on the mend physically too. ---"Love"

I am glad that you seem to have averted a full blown sick, Airborne or not. :) The hedgehogs just keep getting cuter as you make more. And the colors for the baby quilt are so pretty. I have been wanting to make a red and aqua quilt, but I have no plan at the moment.
Stay warm and well and happy stitching.

That's a lot of sewing on the hedgehog quilt! It will be adorable! And I love the fabrics and pattern for the windmill quilt. As to the empty spools, I collect mine and last year before we moved I covered the spools with Christmas fabric and made a garland - which I couldn't find this year. I put beads between the spools, but need to change them for bigger beads so they don't get stuck in the hole. I thought it was pretty cute. Maybe it will turn up for next Christmas!

Glad you didn't succumb to the sickness again....took me almost 2 months to get over a cold and ear infection. (I think it was stress.)
Love the Chasing Windmills pattern you have chosen.
The hedgehogs are adorable;)
Happy Quilting!!

I'm sorry you got sick over the holidays. Glad you rallied to get the hedgehogs done though. They are just too cute. Chasing Windmills will be a perfect baby quilt. I look forward to seeing pics !