One last day of vacation for me today!  We were allowed two floating holidays in addition to two actual holidays around Christmas, and I opted to take mine late.  It's been a nice, long, quilty weekend for me, so we won't talk about what's going to happen tomorrow morning at 6am, okay?

Last July, while I was on vacation, my quilt guild had their annual summer picnic.  At the picnic, our president announced a challenge.  She had three bags.  One contained crayons, one contained nouns written on paper and a third contained numbers written on papers.  If you wished to participate, you drew one from each bag and were to create a 20-inch quilt block using what you drew.  Other colors and whatnot are okay to add, but what you drew must be on there.  I wasn't there, but they kindly drew for me:

Then one morning, in the shower, where my best ideas always seem to hit, I got it.  Why not create in the negative?  So black is white and white is black.  And sepia is the old-timey photo color anyways, so that worked in nicely.

I sketched a little pattern with notes and then put it away.  Still unsure of myself and my idea.

Thursday, I decided I needed to go for it.  These are due the middle of the month and will be displayed in the local library for the month leading up to our quilt show - a promotion of sorts - and patrons will be asked to vote on their favorite.  While I'm not worried about winning, I do want to put up a good showing to get the community interested in these crazy women who sit around in a circle and complain about their husbands all the time - or so the stereotype goes.

So I went and bought fabric.  I was going to dye my own and get a lot of shades, but, well, that was in August...

Saturday I taped papers together to get the right size square and drafted my idea larger, then traced onto Wonder Under (excuses, excuses), though the "photos" are sewn together by machine, as is the gentle curve between water and sand.  I wish I'd bought more than 1/4 yard of most colors (and less of my sepia), but I made it work.

By the time I went to bed Saturday night, it was done! 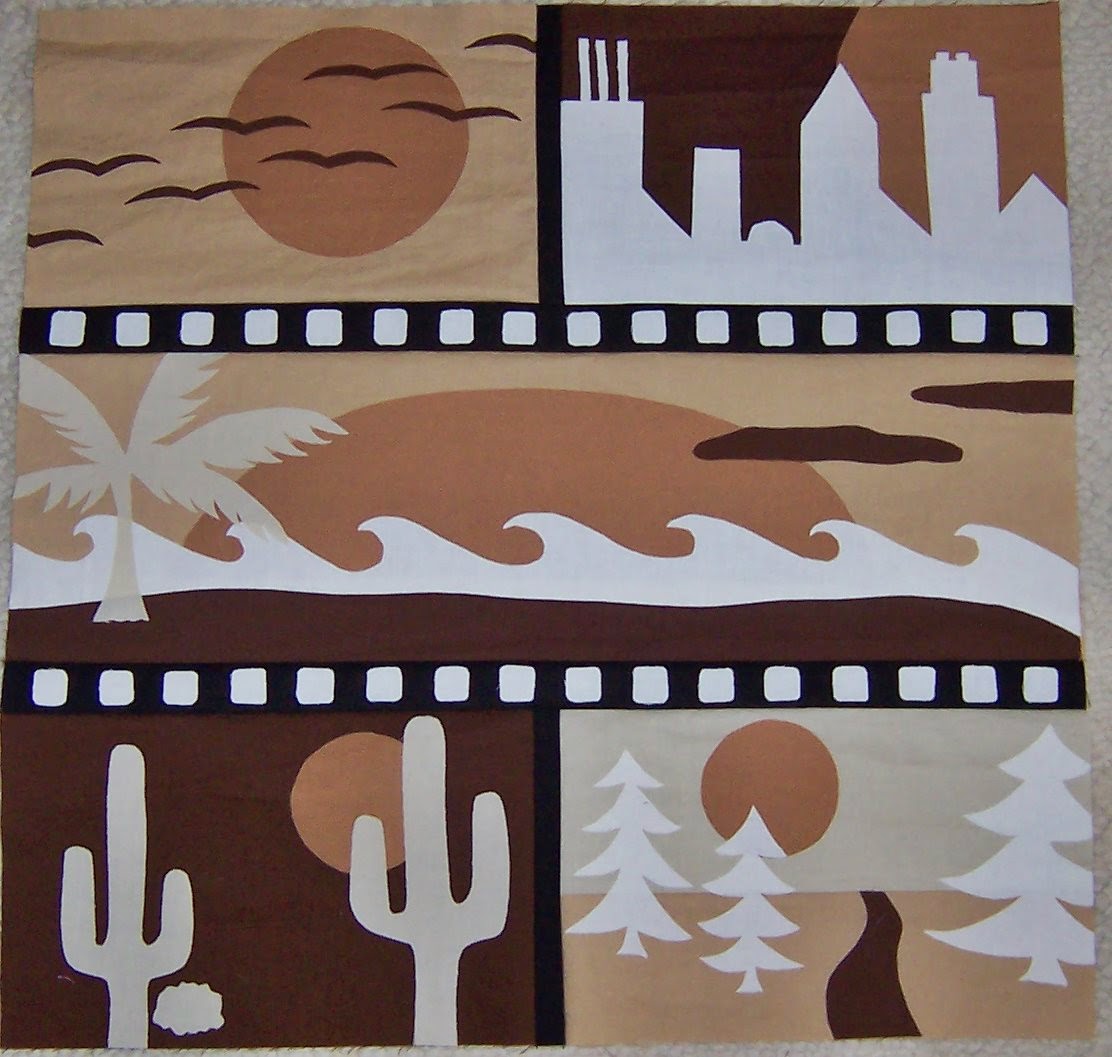 Don't get too picky, as some of the reversals got the better of me, but you get the idea.  And those suns are definitely brown.  (And the tumbleweed, once the seam allowance is taken out, will not look like it's a hover-weed.)

When I shared this with guild members on facebook (private group), I got a little harassing about being a super quilter and how I got this done in two days.  After pointing out that we've had our info for more than 5 months and that I work full-time, they left me alone.

This was my original idea, but Saturday morning, for about an hour or so, I thought about using the Aztec creation myth where five "suns" (or gods) took turns creating the world, the fifth being the world we know today.  Each sun had a persona and there was a neat graphic I found all over the internet that I thought about attempting to recreate.  Then I realized how hard that was going to be and went back to my original idea.  But it's always good to know you have options!

But that's not all I've done this long weekend!  The hedgehogs? 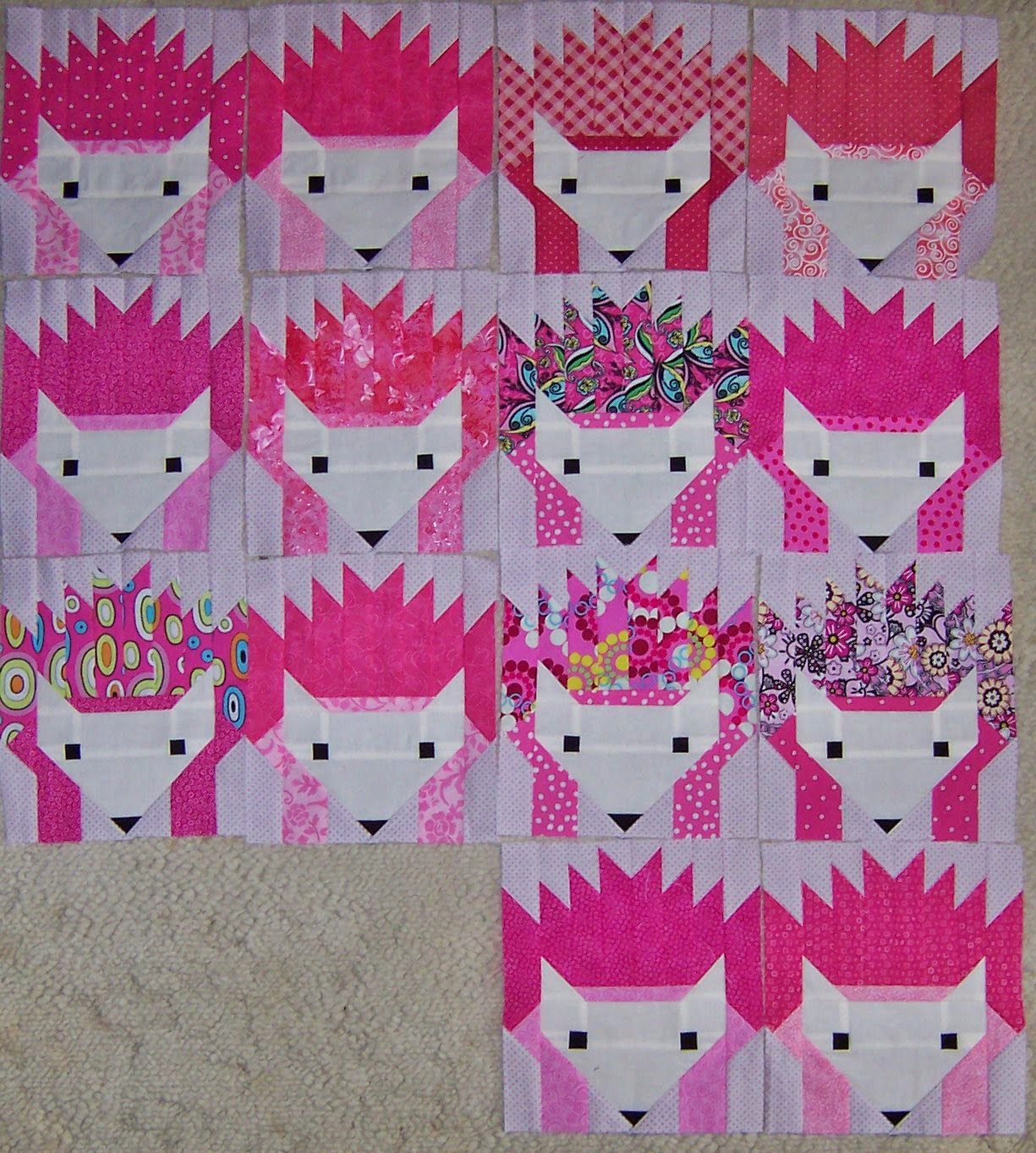 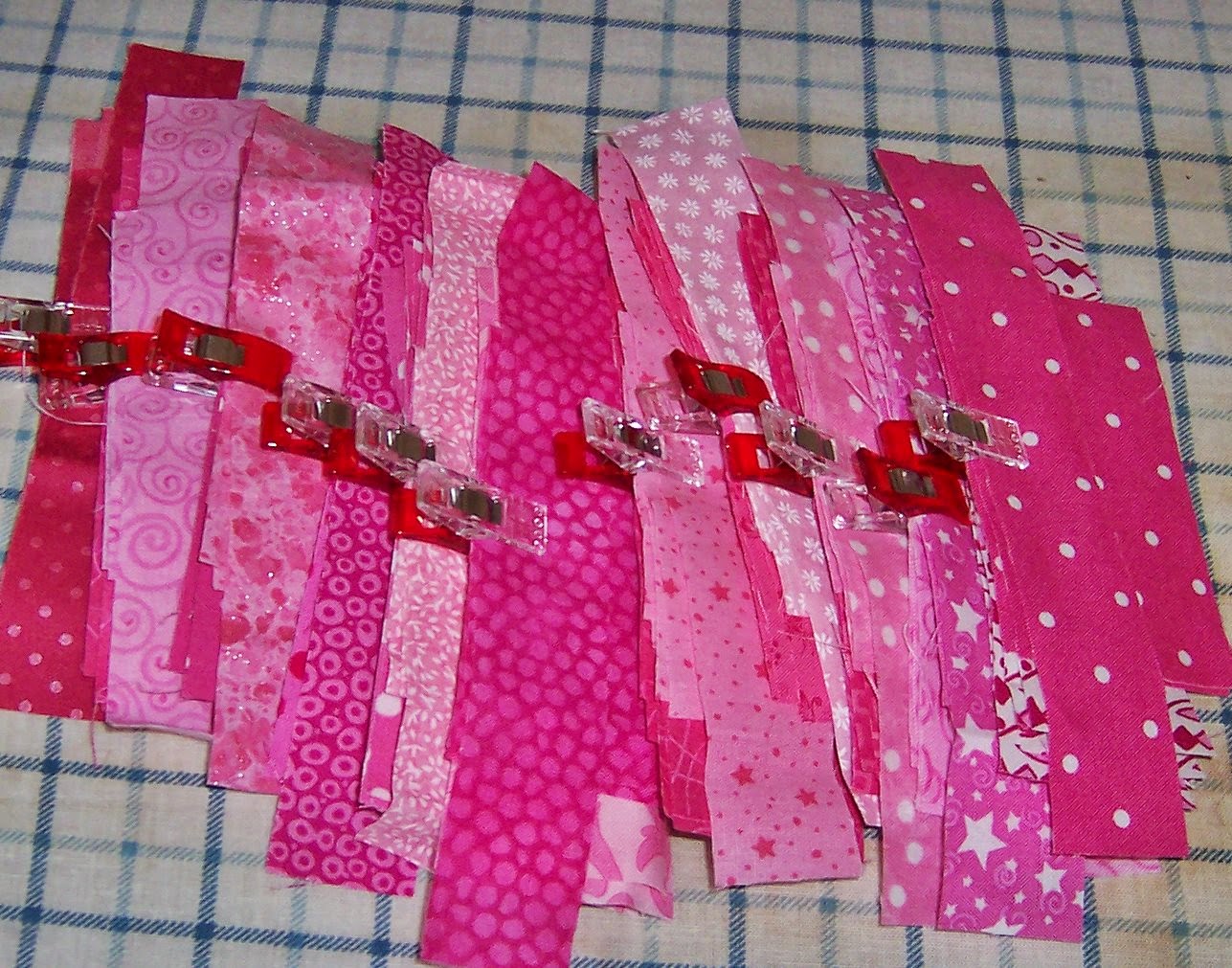 I've used only pinks that I had already.  I dug through all sorts of places, even my bin of binding leftovers, as I can get all the pieces I need out of a binding-width strip (something the pattern doesn't mention and I didn't think about until after I'd made a few) and generally tried to get as much variety as I could.  No two will be the same.

I expect this pre-cutting will decrease my sewing time even more...I love them, but 25 is a lot when you consider all the pieces involved!  (And I'm getting an itch to start something new...uh oh!)

I also bought a back for this quilt while getting my browns.  (I had to do something pretty because who likes to buy four shades of brown?  Solid brown?) 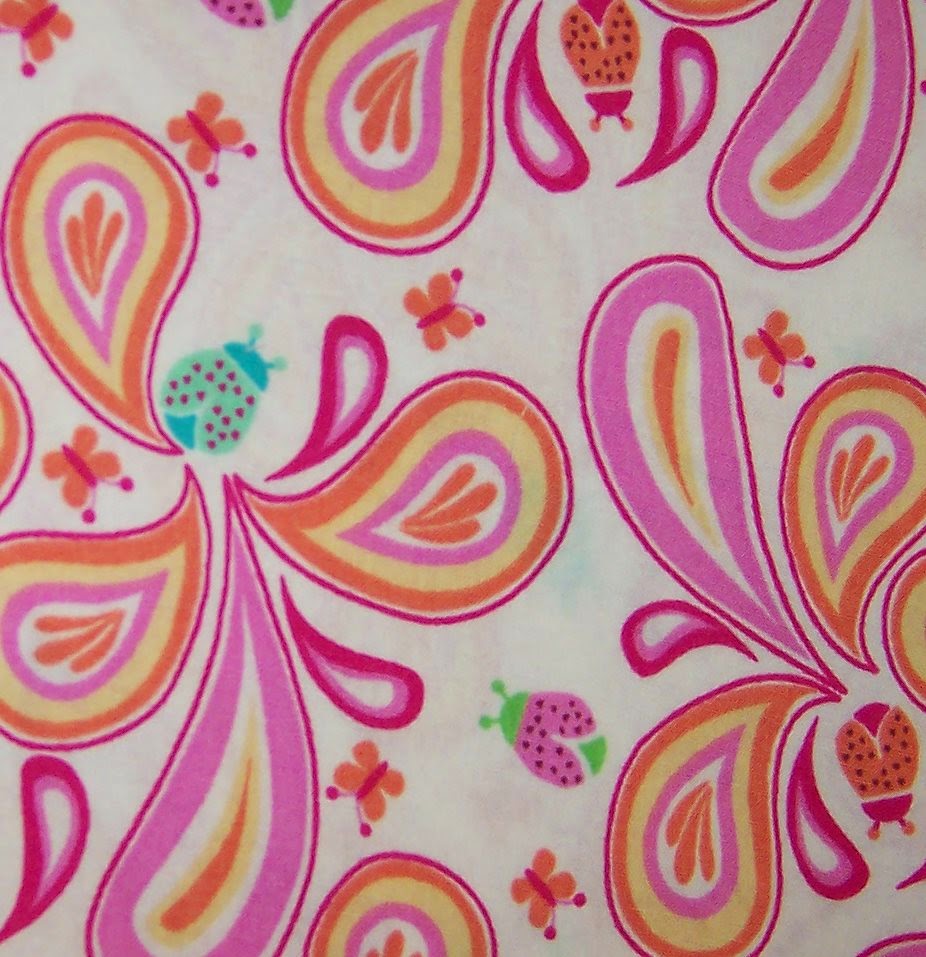 I was hoping for something with hedgehogs, but with 400 owl prints, there was no room for any other sorts of animals except a few fox, cat and dog prints.  Probably next year there will be 400 hedgehog prints when I'm looking for koala bears...

And finally, I purchased fabric (again, was going to dye, but decided to just roll with pre-colored) for the AQS Ultimate Guild Challenge my guild is attempting again this year.  Unlike last year where I decided 2 weeks out to do it, I'm planning a bit more ahead this year.  I already have a plan for my letter "X" (because if I got brown in the other challenge, why would I get an easy letter?) and it should be relatively simple to construct.  But I plan to quilt the bejeezus out of it, so that scares me a little!  Soon...

Those hedgehogs are adorable! I love those blocks. The brown quilt is really nice, too. Love the negative color results. It is not very colorful, but it is striking. Enjoy your last day of vacation!

First of all, your guild members are correct. You are a super quilter! I just love your challenge quilt. Browns are not boring at all when you design a quilt. The hedgehogs continue to be adorable.

I hope the kitties are all well and healthy.

Oh Katie - I love your posts! This one had me giggling left, right and centre. You did an amazing job on the challenge quilt. Perhaps the pressure of having to get it done focussed your design ideas. It looks terrific. Very clever. Loving those pink, punk hedgehogs!!! Super backing fabric too. Of course hedgehogs will be on everything about a month after you finish this one. That X quilt/block turns out to be anything but simple once you have had time to work your magic.

The "brown" one is VERY creative - I LOVE it! And the "hedgehogs" is simply adorable - the backing fabric is a great choice - ;))

Your imagination for the challenge quilt is beyond my comprehension, and the fact that your quilting skills are able to act on that imagination is absolutely incredible! The hedgehogs are adorable too! Your brain must be swirling with quilting all the time! You are quite a gal! ---"Love"

I probably would have given up when I got sepia. LOL You did an amazing job with the content and color of your quilt. You are super quilter.
The hedgehogs are just the cutest and what a great backing.
Way the start the year!

Being a person that hates challenges, I just can't understand how you think up the things that you do!! Yes, you are a super quilter! I would never be able to find that many pinks in my stash, even the binding leftovers or strip drawers. Of course, most of my stash is CW reproductions, which does contain some pinks, but probably not as bright as yours! I'm glad you had a good quilty holiday.