I've really been trying to be a better blogger about my quilting, but first I need to get better about quilting.  Today was a very good quilty day, so maybe I've broken the cycle of not doing much quilting outside of what I absolutely need to get done?

A post or two ago, I shared about finding a dinosaur panel at a quilt show and deciding to make quilts for two of my nephews, brothers.  The older boy loves dinosaurs and I knew he would love it.  And knowing how brothers can be, I knew I needed to make two!

My original plans were to have dino tracks and dino teeth.  The tracks did just fine, as you saw a short while ago: 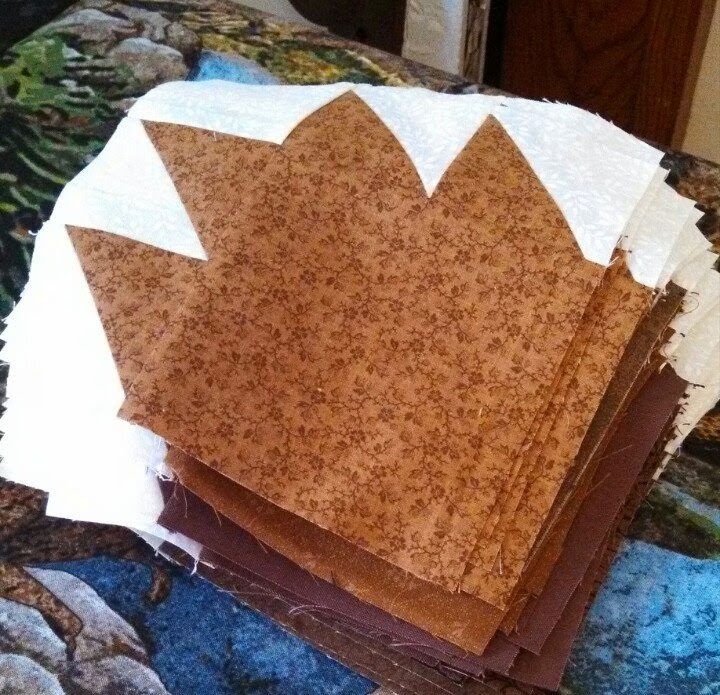 I made a few too many, but had plans for these.  Then a friend was working on a dino quilt for charity and I shared the leftovers with her instead.  They'll get used sooner this way, I'm sure.

And my plan was to make a binding flange of prairie points to be dino "teeth".  Well...the instructions I found online weren't correct and by the time I'd made the first strip of trial teeth, they would have poked out about 1/2 inch from the binding.  I got what I paid for...

So scratch the dino teeth.  The boys aren't going to know the difference and it saved me a bunch of time, so it's all good.

So here's the final product: 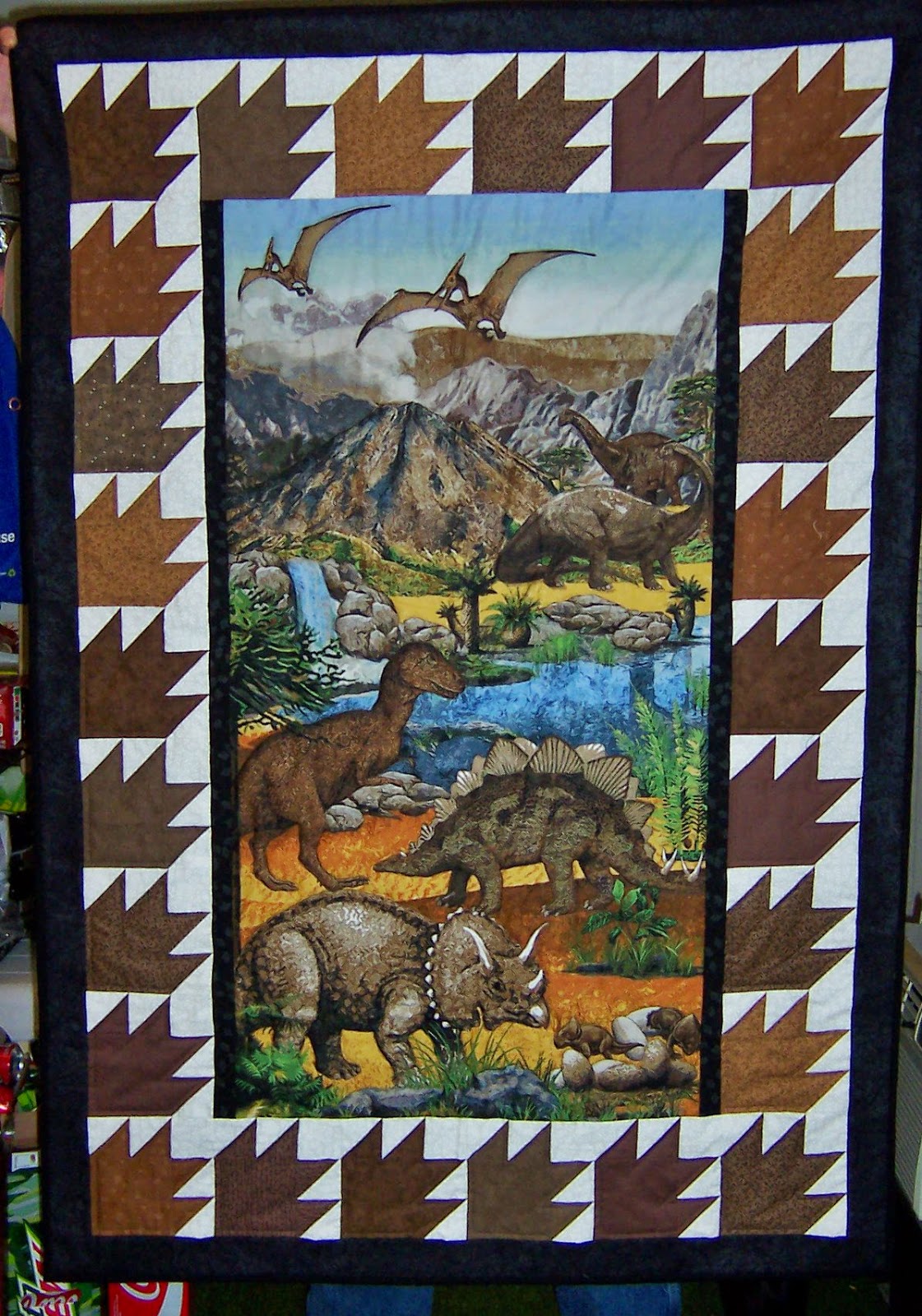 The quilts are essentially identical.  I used what I had for the tracks, so they do differ a little between quilts and the black borders are different around the outside, again using what I had.  The panel is a Stonehenge kids panel, which I didn't realize until I got home and started trimming selvages!

The backs are two different dinosaur fabrics, in an effort to make it super easy for the boys to tell the quilts apart.  They finished about 42x58", perfect snuggle quilts for 3- and 5-year-old boys.  I quilted 1/4" in from the tracks and free-motion outlined the dinosaurs so the quilt will be snuggly instead of stand up on its own with the quilting motifs.

I got to sit next to the older brother at Christmas and help him open gifts (more like hold them on my lap while he slapped me in the face in a frenzy of ripping paper) and he said "a blanket?"  I told him to look closer and see what was on it.  He did and then it was "A DINO BLANKET!!!!!!" and he shoved his face in it and snuggled it.  I guess he liked it?

The younger brother was across the room and it was a little chaotic (5 of the 8 kids there were 3 or younger), so I didn't see his reaction, but my sister-in-law sent a photo the next day of the younger boy snuggled up with it, watching television, so I guess they were a hit for both boys.

My hubby kept insisting we had to get the boys an additional, small, toy-gift.  I kept putting him off.  Finally I asked him if he thought the boys would remember who gave them trucks and dinosaurs and whatnot in a few weeks and it dawned on him that the one gift those boys will remember where it came from forever is a quilt.  That was the end of the insistence that we buy toys.  I felt we'd spent enough on the materials for the quilts, never mind my time, but my hubby, like so many others, doesn't place much value on homemade items and forgets that materials do cost money.  So I had to find a way to get him to agree with me about no more gifts...success!

There was a third quilt given for a Christmas gift, but I'll save that for another post.

I think some of my motivation to get quilting today came from being really sick the week leading up to Christmas.  I got the respiratory flu (like a cold, but with a fever) about two weeks before Christmas.  So I took some cold medicine to treat the symptoms and slept a lot.  The symptoms ran their course (and I slept A LOT!), but I also had an upset stomach.  After 6 days of eating almost nothing due to nausea, I finally went to the doctor.  Turns out that one of the active ingredients in the cough syrup I was taking is known to cause stomach upset!  I've taken it many, many times before and never had trouble, but I was already not eating a lot and it just got to me.  The doc gave me some anti-nausea pills (I love science!) and after a few doses, I had finally broken the cycle.  And I haven't taken any of the cough syrup since, though I do still have a lingering cough.

But, a lot of the time I spent lying in bed feeling miserable (between many naps), I was frustrated that I couldn't be sewing!  I ended up taking three days off work (which probably should have been more like 6) and that was even more frustrating that I didn't have the energy to watch television, let alone sew.  I have four projects I want to start!  And I still wasn't feeling better for my quilt group sewing weekend.  Talk about making a gal feel even worse!

So yesterday, feeling much better, I did a lot of chores around the house - stuff the hubby just doesn't see (though I really can't figure out how he can't see it...) - and got myself into a good position to play today.  And once the few chores for today were done, I dug into my first new project!

Yep, pieces labelled up to "S"!

I saw this super cute hedgehog pattern on Pinterest a while back, but didn't have plans for it...yet.  Then a coworker (now former coworker) told me his wife was pregnant.  I found out not too long ago that they're having a girl.  In March.  So since we're still in touch and because he's a great guy and his wife is so sweet, I decided they needed a baby quilt.  But there's an older daughter.  She's 10.  And is more excited than anyone about having a baby sister (her words), but I imagine that once the baby sister actually arrives and demands ALL of dad and step-mom's time, that excitement is going to wear off quickly.  So big sister needs a quilt, right?  Enter Hazel Hedgehog.  In pinks, of course.

I made a test block today to make sure the pattern made sense.  With so many pieces, and planning to make the pinks a little scrappy, I didn't want to start cutting masses of pieces if something was wrong. 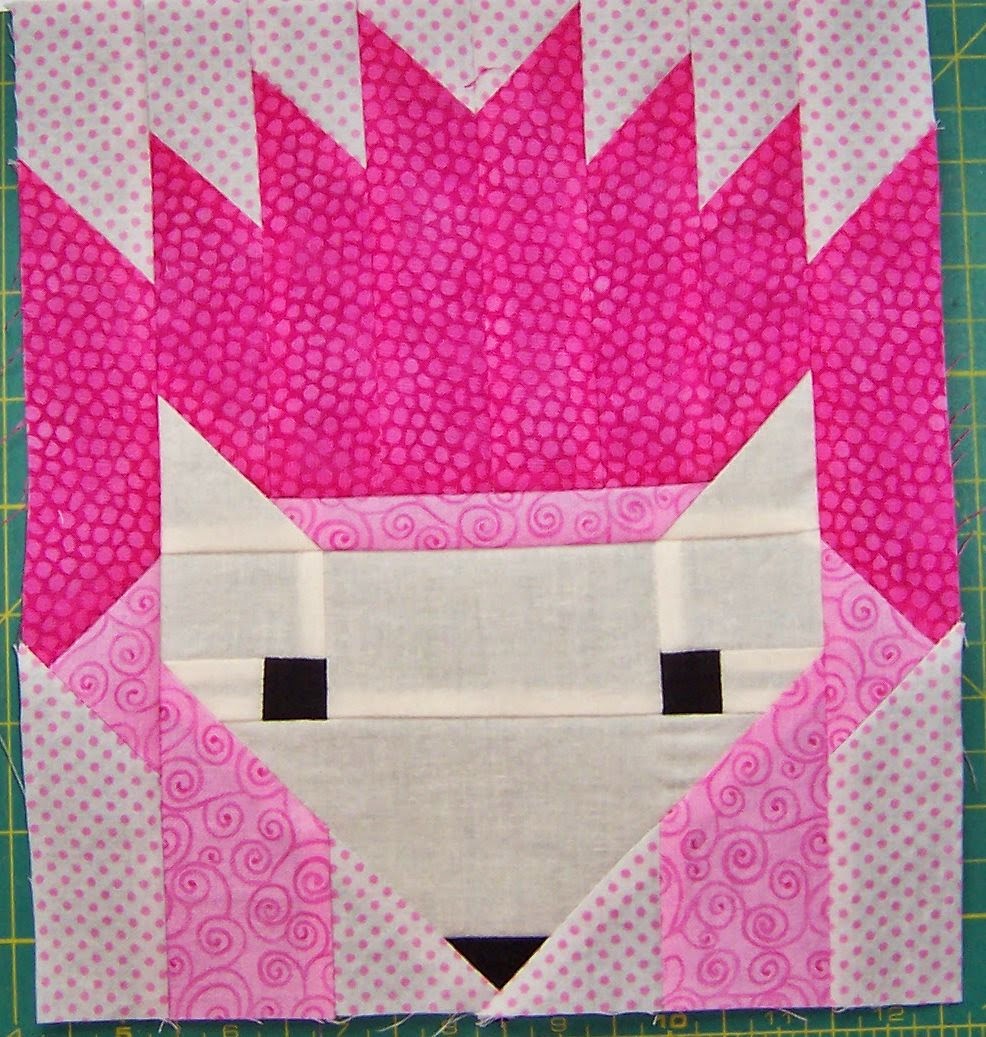 Other than the 37 or so pieces, not bad.  It took a few hours, but some of that included pressing and refolding fabrics I'd purchased for the face and background, but had only gotten as far as prewashing.

I'm debating making some of the hedgehogs in purples, turquoise and lime greens, but we'll see how my stash of pinks holds up.  I have to make 25 total, so only 24 more to go!

Once this was complete, I started cutting face and background pieces for all the blocks.  And then started sewing what I could of these so I have a head-start when I start with the scrappy parts.

Blurry photo, but that's the eyes and most of the face.  There's a "lost corner" technique to get the feet and background in there, but this represents 8 pieces already sewn together, so good progress!

The other quilts I plan to make:

Ambitious?  Yep.
(Would you expect any less from me?)

In addition to all of this fun, I have taken on the Membership Chair position in my quilt guild.  I will continue to do the newsletter as well, but neither job is very demanding and I'm excited to be involved with welcoming new members.

I hope you all had a happy Thanksgiving, a Merry Christmas and will have a wonderful New Year!  I'm looking forward to a few days off to start the new year, and I hope to burn through dozens of bobbins in my sewing machine during that time!

Love love love the hedgehog! She'd be cute in purples, aquas and lime too. I'm glad the dino quilts were appreciated, and that the hubby finally "got it" :) And may I say you seem to be finding your quilty enthusiasm again! (Time to go find mine, I've been turning in circles thinking I should be sewing but not really being inspired by anythin...)

Happy New Year, Katie. I've known all along you are a super-quilter!

Katie, I'm so sorry to hear you have been sick, that is no fun this time of year. I love the dino quilt, the dino tracks make it fun. I have the same brown fabric in my stash, too! The hedge hog quilt block is adorable, I can't wait to see the whole quilt! Enjoy the rest of your days off and feel better soon. Don't overdo though, don't want you to have a relapse! Happy New Year!

Gosh Katie, you had a pretty rough run with that flu. Glad that you are on the mend and feeling much better. Your Dino quilts will be loved for years to come and used a lot more than toys. My word that hedgehog blog is complex but you are just the girl for the job. The blocks are real cute! Nor surprisingly, you have a set yourself quite a list of quilts to make and we will enjoy seeing each one as they progress. I'm grateful that you are sewing enough for both of us! Guess I should be sharing the load a bit more, huh?

You have a wonderful way with picking quilts to make for the people in your life! The hedgehog quilt will be adorable. I couldn't believe that block had 37 pieces - until I counted them! Maybe it's better not to count. Have fun sewing!

"Ambitious" is hardly the word I'd use to describe your planned projects. "Impossible" is the word I'd have to use, but I should know by now that all your planning is how you accomplish so much quilting. The Dino quilts will be much used and loved by those little boys, and the hedgehog quilt will be adorable too, in spite of all those little pieces!
I hope you get to feeling better today; "yesterday" would be even better! It's no fun being sick during Christmas. ---"Love"

So happy to hear from you!! Sorry you have been sick. Not fun anytime but it seems especially bad around the holidays. Hope you are well on the way to 100%.
The dino quilts are so cute and sounds like they are loved already. The hedgehog is so cute! I do believe that you have found your quilting mojo if your list is anything to go by. ;)
Can't wait to see all your new projects. Happy New Year.