something new to try

My quilty life hasn't been much lately.

But last weekend I decided it was time to try something new.

I'm working on a project.
It's a secret.
Another one of those.  Sheesh!
But I can share that it requires 7" zippers.

My mom found a bunch at a crafty outlet for 10 cents each.
Score!
They were brown and yellow.
Bleh.

I wanted white, or red, or pink.

So I bought some Rit dye remover powder and mixed it up in a bucket in my bathroom tub.

(Sometimes I wonder who writes these instructions and what, exactly, they think we folks at home actually have...) 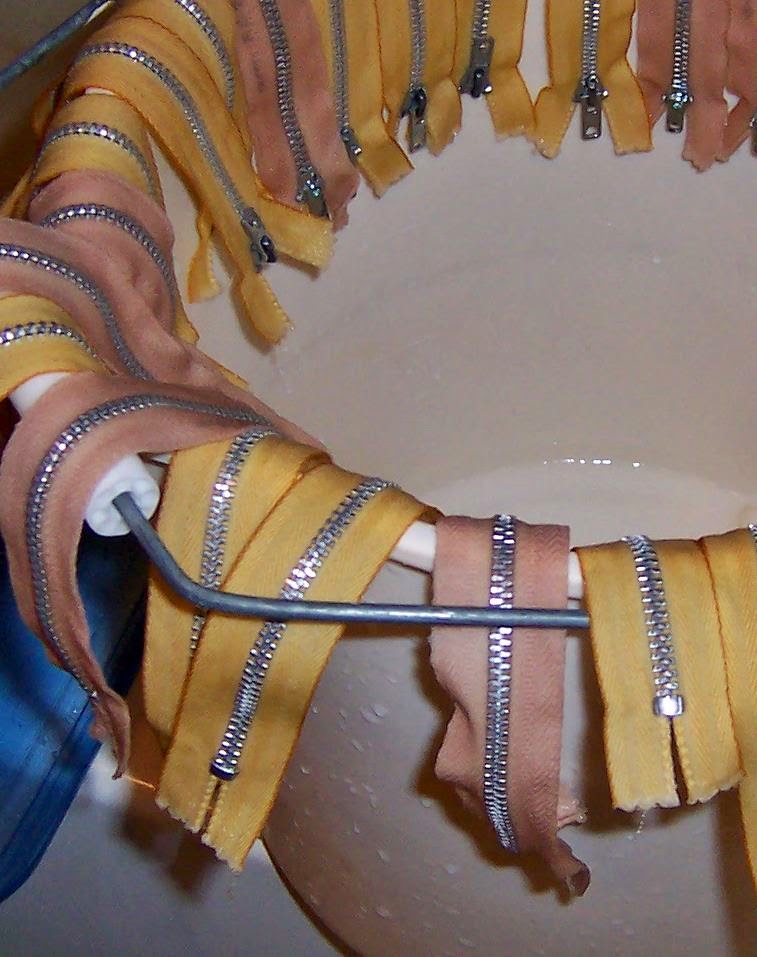 As you can see, the brown zippers are no longer brown.  The yellow zippers...well, their dye must have been a lot more sticky.

But those brown ones are light enough to re-dye!  And the yellow ones were probably already light enough before the remover step, but if you've got a bucket of dye remover mixed up, why not throw them in?

(Again, scratching my head over what these people at the Rit company think we home crafters possess...stir constantly for 30 minutes?  Right.  I have the patience of a gnat...) 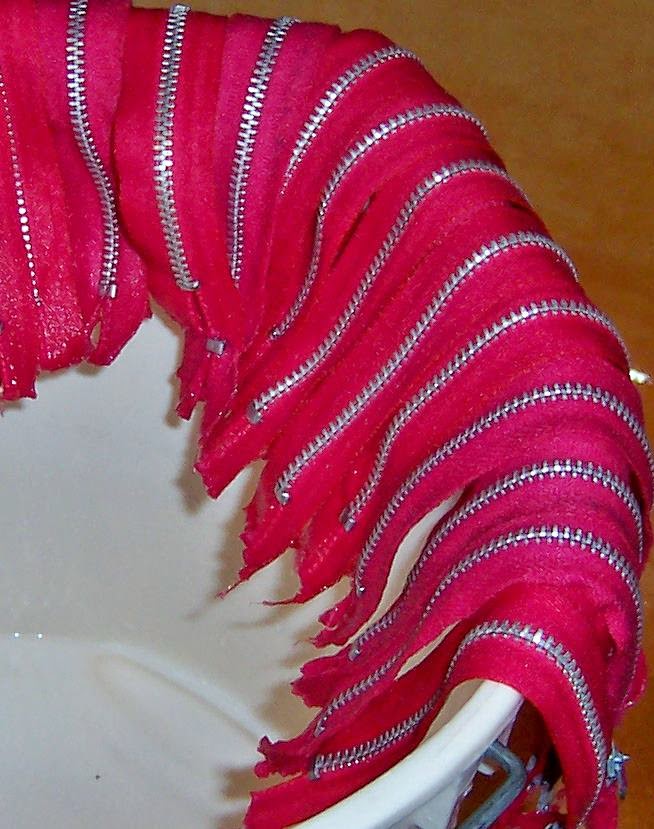 I went with my friend Dale's version of things...just dump some in and see what happens.
I guess those directions aren't really important.
(Thanks Dale!)

The hubby was having a fit, saying that it was all going to go horribly wrong.  I figured the worst that happened was I had to mix up more dye and do it again.  But after about 4,000 rinsings, the water finally ran clear and I threw these guys in the dryer for a final heat set.

(Next time I just won't let the hubby in on the project details.)

They have now been sewn into their project, but I can't share that just yet.

So I HAVE been doing SOMETHING.

(Other than the somethings like scrubbing out cat litterboxes (like dump, scrub with an SOS pad, spray with bleach solution, vacuum under where it sat and scrub walls behind where it sat) and super fun stuff like that...but who wants to hear about that?)

Here's to hoping the next few weeks will be more productive.

I think I like Dale's version of things. That color is gorgeous. And yes, I think just showing husbands the finished product works best :) Now I'll wait patiently until you can reveal the super secret project with the gorgeous zippers.

What a bargain the zippers were and you are brave to try the dyeing process but you have a great outcome. Those pink zippers are so pretty! I can't wait to see what you are making with them.

Utoh - kitty problems? Hate that! Can't wait to see what you did with all those zippers. :)

With all the expense of the Rit, water, and other stuff, might it have been h=en cheaper just to buy the zippers in the color you wanted??? *giggle* You have my curiosity up now. Hope you can show us the secret soon. ---"Love"

I have seen some projects involving zippers floating around on the internet - can't really remember what they were, but looked interesting! I have a lot of zippers (in storage right now) because we had a store near us that sold them very cheap - not as cheap as what you got though. I bought a kit a week ago at a booth when I was at the parade and it's for making beaded feather earrings. Yesterday I started on it and thought about taking a picture. Maybe I will blog about it. It's fun to try new things! You got me wondering!

I would never have though of undying and over dying those zippers. Now I am so curious about that project.
Hope you find some quilty time/mojo.