It's the usual story...I haven't been quilting much lately...but...
Last week, the hubby and I spent the week on Drummond Island.  As we've done the 3 previous years, he packs all his fishing stuff and I pack all my quilting stuff (all being a relative term for both of us) and he fishes with the guys for a week and I sew for a week.

Now we're home.  Laundry is done, suitcases and projects unpacked and the fridge is restocked, so it's time to share my adventures!

First up was a baby quilt that needed a little more work to get the top done.  I can't share yet because the baby shower is Thursday and I know the gal who will get it reads my blog.  I quilted it today and it still needs binding and a label, but I have 3.5 days, so what's the rush?!

Then I moved on to a project for myself...the Christmas Pickle.  This is where things were when I left last Saturday: 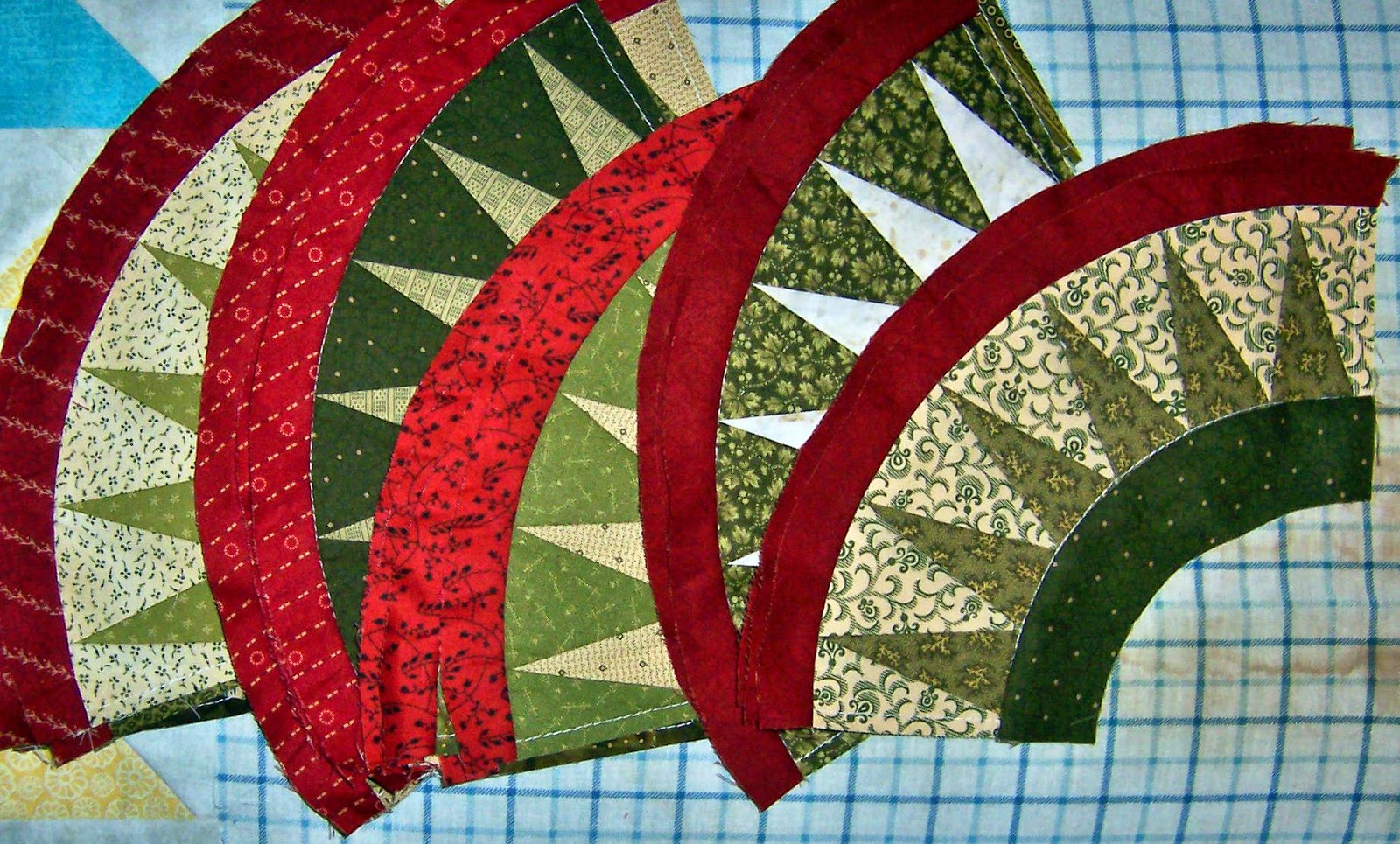 There were 3 more pieces to add to each of the arcs at this point.  I used a LOT of pins (at one point I counted 36 that I pulled out of the wider end after sewing a curve) and took my time, but by Thursday afternoon, I was able to snap this photo: 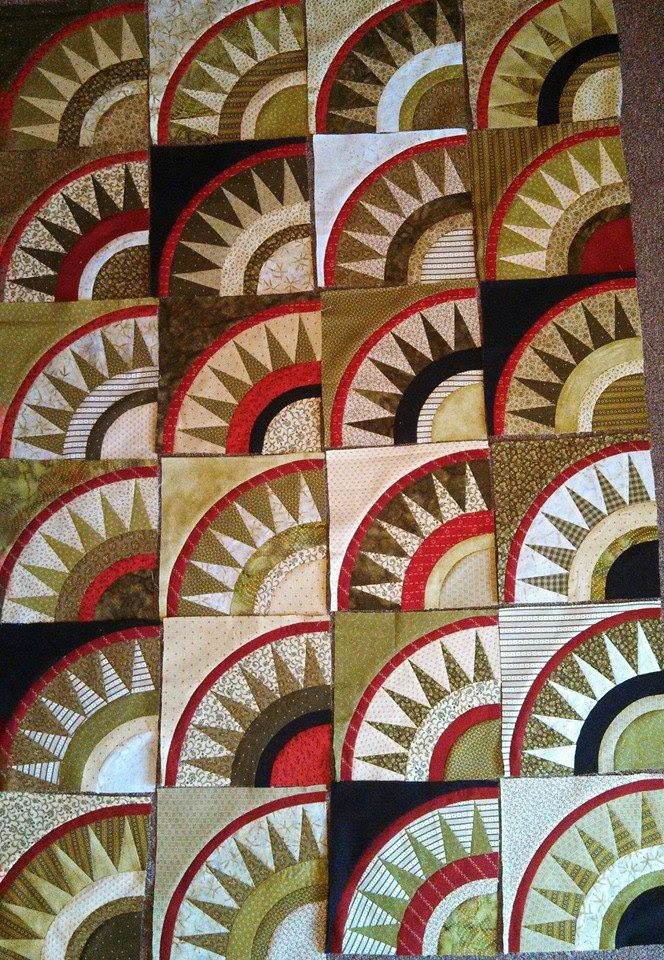 I still have to make 120 4" pinwheel blocks, but I have a grid method of marking and sewing, then cutting, that I believe I can make 20 half-square triangles without stopping sewing, which means I'll only have to make 24 of those grids.  (Only.)  I'll try to remember to get photos to share how I did it.  I've done it before, but it's been a long time.  (In other words, it's not a new technique!)

But having forgotten a rotary ruler, I was stuck here.  That's okay.  I had other projects!

Friday morning I dug into the Merry, Merry Snowmen project box, hoping I'd find pieces cut and pinned as I expected, but I hadn't opened the box before leaving (again, expecting I'd have a ruler to use my rotary cutter...), so I wasn't sure.  Luck was on my side, so I sewed down ALL the pieces on this baby: 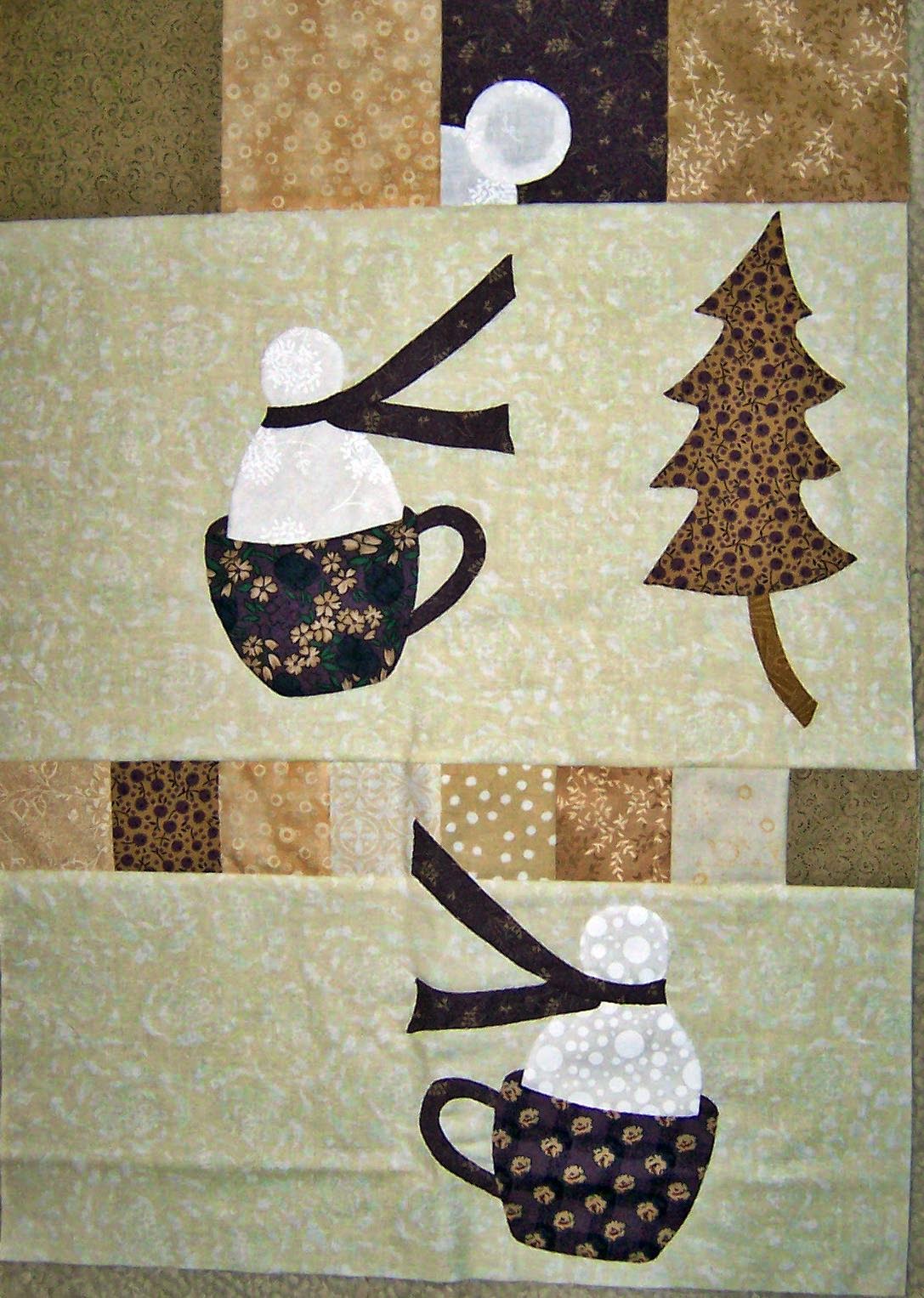 There are some details that need to be embroidered, but the harder part is done.  (And those teacups and scarves are purple, but my camera hates purple, so this is what you get.  Use your imagination, please.)  I don't remember what number block this is, only that I am terribly behind and that, if I had stuck to my original plan, I'd be sewing blocks together into a quilt this month.  But I'm behind.  As it is with all quilts I make for myself.

After lunch it had warmed up enough (highs were in the 70s this week - no complaints, but it was a little chilly at night - a vast improvement over the last 3 years where it was 85 at night and 99 during the day with not a breeze to speak of) to work outside...

Remember this quilt?  I worked on at my guild retreat a year ago. 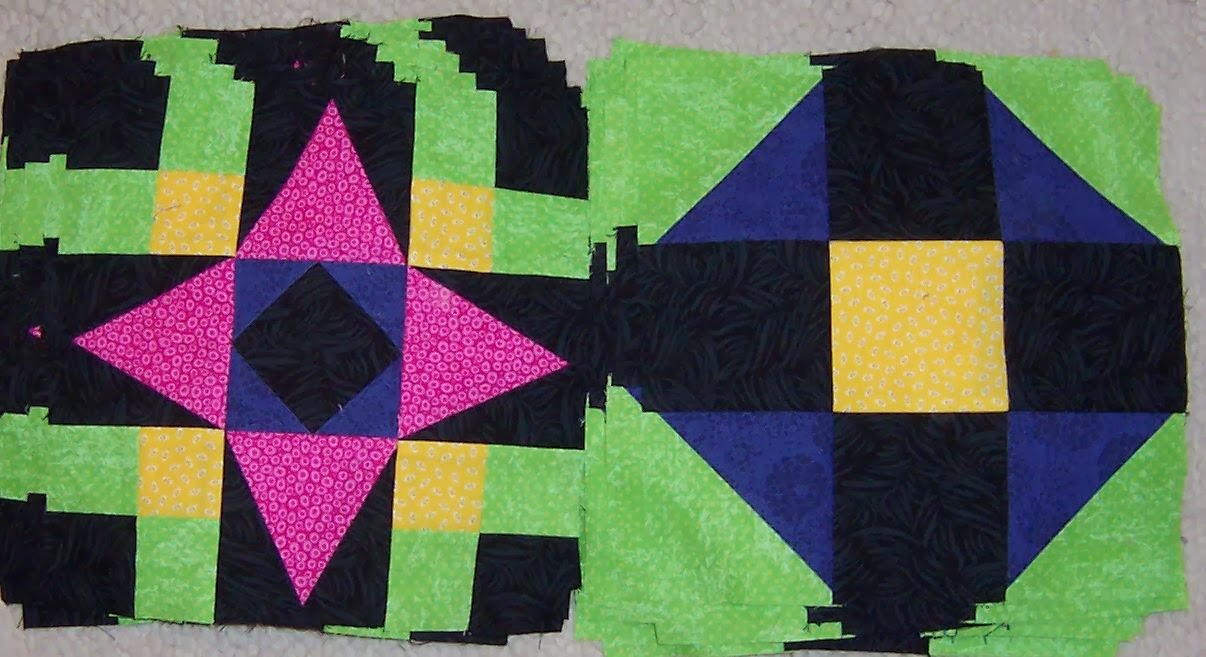 Well, I sewed all those blocks together.  And I was going to do what a member of the Quiltmaker Scrap Squad had done.  But I didn't have the photo, so I just assumed that she'd sewn the blocks together in straight rows like the original, you know, in the magazine I had in my hand.  And then I wondered what she'd done for borders.  OH CRUD!!!!!  She sewed the blocks on point.  And made fancy setting triangles.  I just sewed 63 blocks together.  So I thought I'd sew on a border and it would be okay.  WRONG.  (Sorry I forgot to take photos of all of this, but I was so mad, it's probably better I don't have proof to look at now.  Or ever.)

So I started ripping it out.  3 rows can stay together and I planned to deconstruct to the row level.  That's a lot of ripping out.

They're in rows now.  Plus one set of three rows.  It worked out nicely that I sat in a lawn chair for about 5 hours on Friday afternoon, in the beautiful shade, sitting by the lake, throwing those bits of thread in the grass for the birds to make nests out of.  Or, being 100% cotton thread, just be compost. 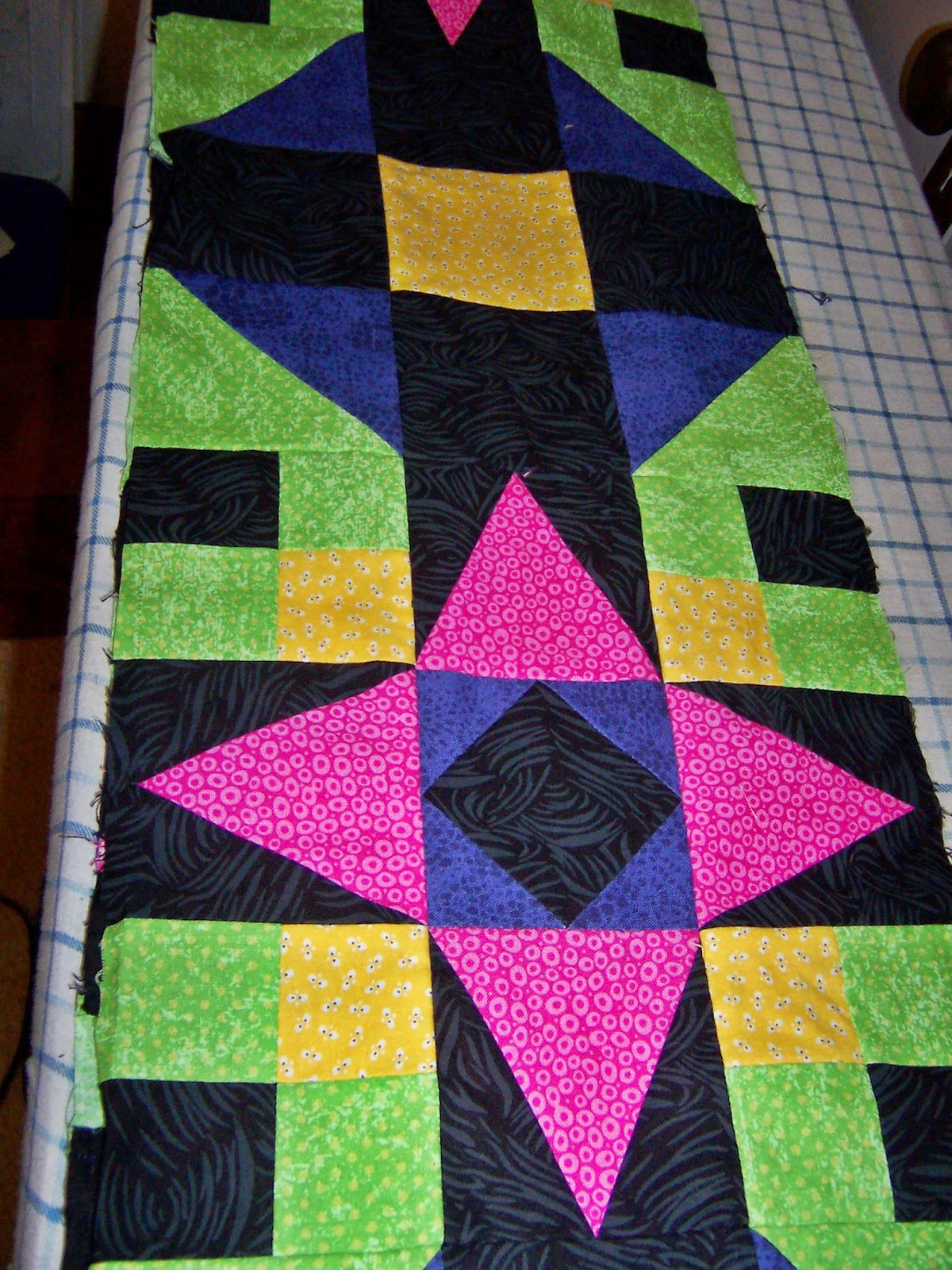 And now they're awaiting further deconstruction, as needed.  Plus construction of setting triangles and, I think, a few more blocks.  But the hardest part is done and I'm glad.  I know I'm going to love the quilt when it's together properly and probably never would have finished it if I hadn't taken it apart.

And guess what?  I'm going to LOOK AT THE PHOTO next time.  Before I start sewing like a fool, getting all excited that I'll have a quilt top together soon.

So that ended my week.  A good note, but my back is still a little sore!

While we were there, the daughter of the friends we go up to visit gave us a gift. 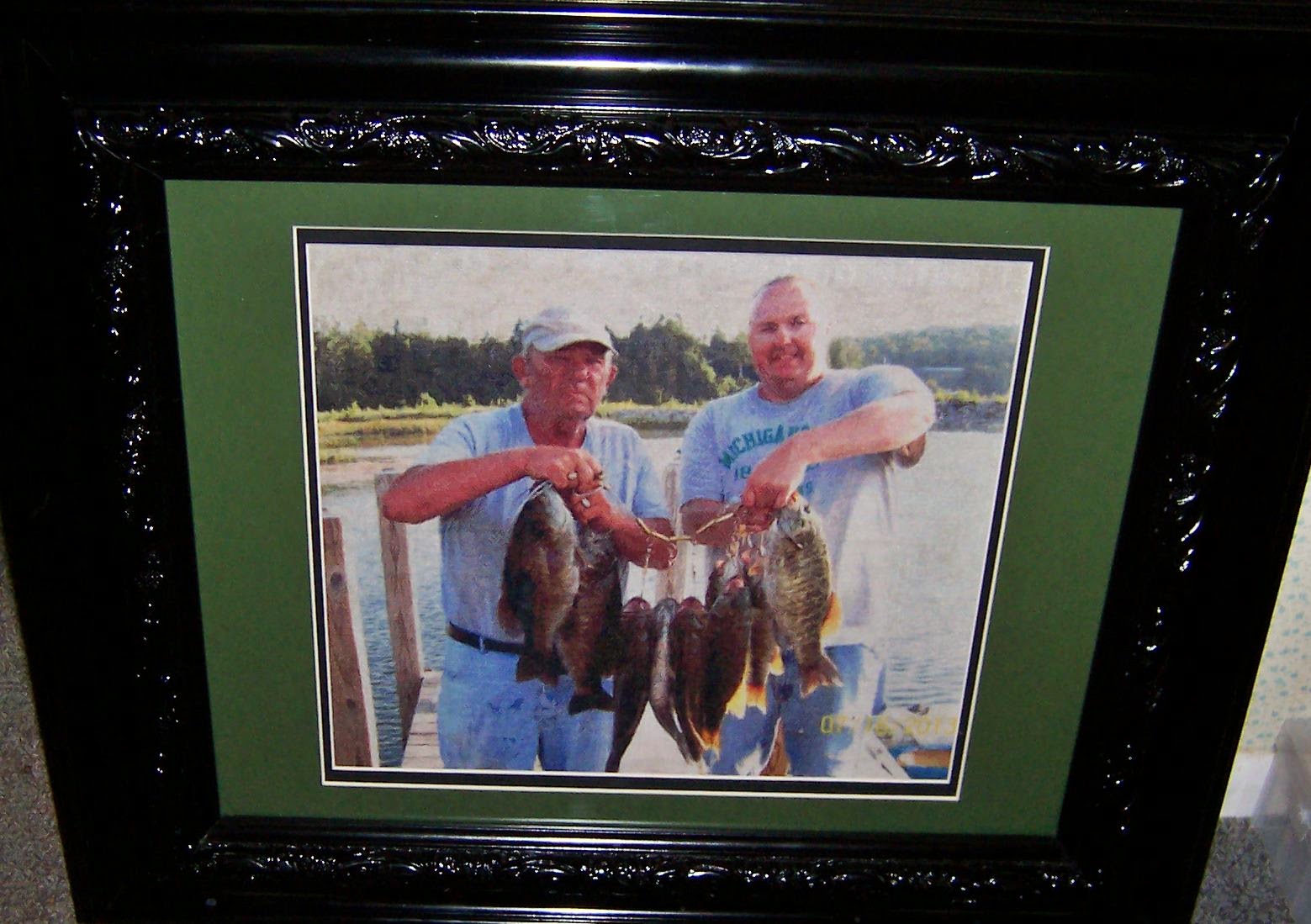 If you can't tell, that is CROSS STITCHED!  She has a program on her computer that will take a photo and turn it into a cross stitch pattern.  This photos was taken just a year ago.  EVERY SINGLE SQUARE is stitched.  She did this in ONE YEAR!  I couldn't do that in one lifetime, but she loves to do it.  I couldn't believe she gave this to us.  That much work is crazy, but I know that, like quilting, you'll never get out of it what it's truly worth, so giving handmade away to those who will appreciate it is satisfying.  And we do appreciate it.  The hubby plans to take it to work and hang it above his desk.

The funny part of this is that while the guys were standing there with their fish, both the friend and I were snapping photos.  The hubby and I had this same photo (taken by me) printed and framed to give to the couple we visit.  The other wife shared her photo (taken by her) with her daughter to make this amazing gift.  Of all the fish photos that have been taken over the years, it's crazy that we both chose the same one.

While I was gone, my quilt guild had their picnic.  I was sad to miss it, but it couldn't be helped.  There was one challenge, issued by a member, that was due and those in attendance voted.  (I never even got started on mine, but after choosing stained glass technique, even getting blue and sports for my other two rules couldn't save it...I am NOT a fan of that technique, no matter how many beautiful quilts you show me that use it.)  But I have seen photos of them - being the newsletter lady, I asked for members to send me photos and they did, so I didn't completely miss the party!

But there were TWO more challenges decided, too!  One was issued by our president and you drew a crayon (for a color), a number and a noun.  With those, you need to make a 20" block that will hang in our local library to both promote our upcoming quilt show (they're due in February - show is in March) and to allow library patrons to vote for their favorite.  Someone drew my crayon and such, but I have yet to find out what I got.  The second was a theme for the 2015 AQS guild challenge - we didn't make it this year, but we're going to try again next year.  The theme chosen was "numbers".  I have no other details on that yet, but I'm already thinking on how to turn this into another science geek quilt...pi?  Avogadro's number?  hmmm....

Coming up this next weekend is our guild retreat.  I can't wait!  I have 4 days of work to get through first, and I need to do a better job of deciding what projects I'll be taking with me than I did for vacation (this time I don't have the back of a pickup at my disposal), but it's only Sunday.  I have started a list of things I don't want to forget and things I want to get done before I leave because some days...  This year I plan to take my camera and do better about getting photos...being the newsletter lady comes with more responsibilities!

Now it's off to figure out what I'd intended for binding that baby quilt and get that made.  You know how when you're standing in the store it's all clear, but 4 months later you can't remember what you were thinking?  Yep, that's where I am.  I do still have a few days, but with the hubby busy playing video games (I think last week he might have gone into withdrawal!), I might as well take advantage of the freedom and keep going!

The Christmas pickle is so stunning. Love the Snowmen too. Sorry about not having everything you needed with you, but it looks like you made lots of progress.
That cross stitch is unbelievable. It is funny you both used the same picture.
Have a great retreat.

It sounds like you had a good and productive week, even though you had to use your seam ripper a lot! I am lost when I don't have one handy! The pickle quilt is going to be lucious!

Girl, you have been busy having way too much fun! All your projects are looking great, and that fish cross stitch is incredible! I can't imagine doing that, but I have a few pieces my sister did a few years ago. None that detailed though; that's just amazing! Your Christmas Pickles look really "sweet"! ---"Love"

That Christmas Pickle is going to be fabulous! Too bad about having to stop midstride due to the lack of a rotary cutter! You made good progress on the snowmen though. I'm sure all the ripping in the last quilt was a pain, but oh, I do love those blocks and those colors. Can't wait for more!
That cross stitched picture is amazing! I had no idea that was possible! Enjoy your guild retreat. I'm sure you'll be double checking the packing list...

Wow, you have been so busy! I love the pickle quilt and the snowmen and everything else. The cross stitch from the photo is amazing, too. Have fun! ! !

You have been so busy! I love the pickle quilt and the snowmen and everything else. That cross stitch from the photo is amazing! Glad you had a good vacation, enjoy!

Let's hope that you've realized by now that the theme for next year's AQS challenge is LETTERS not numbers :)