wisconsin and a pickle

I spent the majority of last week in Wisconsin for work.  Cross-training they said.  I'm a lab tech.  I spent most of one day with a guy who breeds dairy cows.  Though we work for the same company and it's good to see how other business units work, it was so far out of my comfort zone, I had no idea how this trip would go.  Needless to say, I was more than a little nervous.

It was a day drive each way, so I was really only training for two days.  The first I spent in a couple of labs that do similar or the same testing that my coworkers and I do.  So that day wasn't as scary.  (Driving hours across a state I'm unfamiliar with was.)  I learned a few things and shared a few things and met some really nice people.

Day two was in the field.  Most of it was with a guy breeding cows.  I'm not sharing photos because if you know how cows are bred (by humans), you probably don't want to see them.  But photos were taken.  Once the guy I was out with heard this, he made sure to take every opportunity to get photos.  And then sent them on to management.  (I guess the perk here is that they knew I participated, right?)

What I will show photos of is the food!

There's a "belly buster" walleye sandwich, a cheese curd cheeseburger (with the biggest cheese curds I've ever seen) and a mooseburger.  I did not go hungry.

Anyways, the time spent with the breeding guy turned out to be lots of fun.  We visited a LOT of farms and he moves FAST, but I kept up and made it through the day unharmed.  (And did not adopt any more farm cats.  But if it hadn't been such a long drive home...)  And he paid me a huge compliment in saying I caught on to some stuff faster than people who are hired to do his same job!

Late afternoon on day two was spent with a gal who looks at all sorts of information on the farm, from electronic records, and helps the farmer improve what he is doing.  It was not nearly as fun, as we were sitting in a hot, stuffy office, fighting with a computer that didn't want to work well, and I had little understanding of where the numbers and graphs came from.  But I guess that just means I have more learning to do!

Friday was spent driving home and that couldn't go fast enough.  (Why does it always seem to take longer to get home than to get there?)  But I'm home, safe, and glad to have slept in my own bed the past few nights.  And I took today (Monday) off to have a little extra time to relax before heading back to my real job.

And though I didn't think about it before asking for today off, this weekend was my quilt group's sewing Saturday (which is really Friday through Sunday if someone wants to keep the key that long).  So I felt more free to play most of the weekend and have today to catch up.

Saturday I was not very motivated.  I'd taken my Christmas Pickle project, which has not seen the light of day for probably a year. 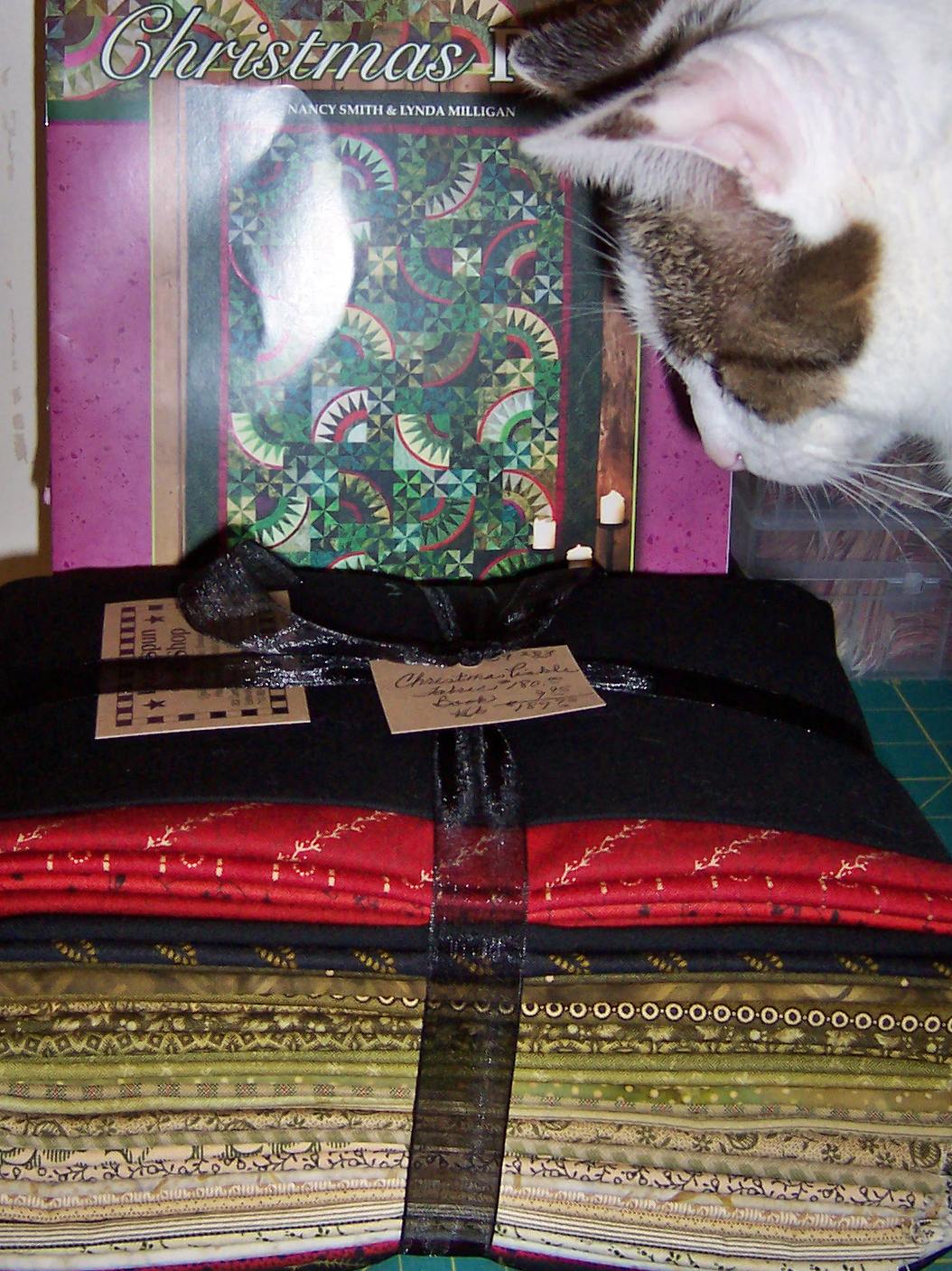 I want the quilt done, but those arcs were scary and they're hand-cut and I've not really done much curved piecing before.  But first I still had two more paper pieced parts of the arcs to go, so I made those.  And then consulted with the other gals, many of which have done this type of stuff before.  (I so love having Saturday quilt days with other experienced quilters!)  A plan was made and I was off.

That first arc wasn't so bad (in red).  The second one is much harder, but by then I'd done 24 of the larger ones, so had a better handle on pinning and positioning and fussing with things. 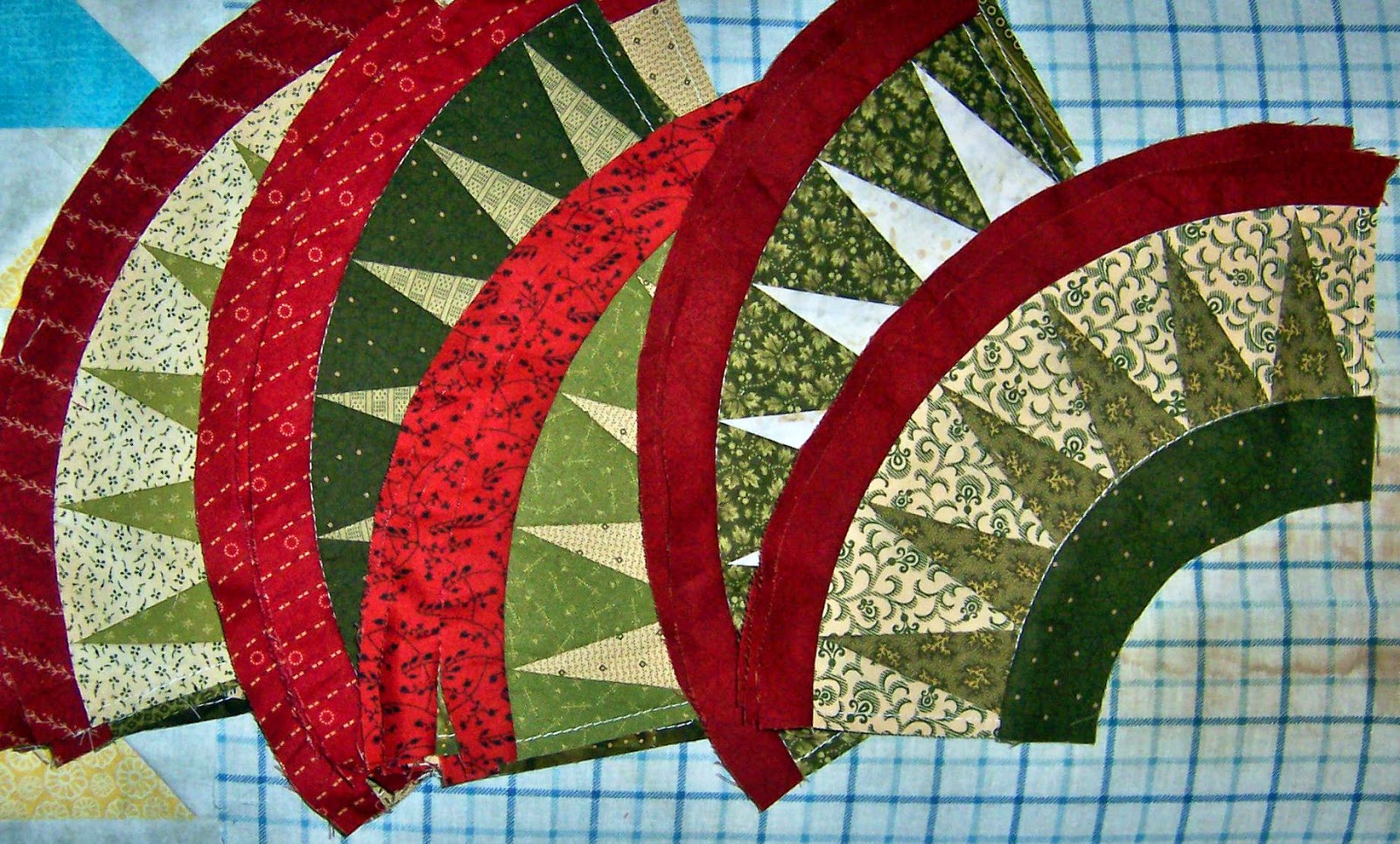 (Yeesh!  Those colors are off - those earlier photos are much truer...)

But this quilt was so gorgeous when I saw it made up, I want it finished.  And it's been nearly two years since I got this kit, so it's time to finish it.  I think I'll probably put a little more time in today - since I have to cut all the arcs by hand, I can do that while watching some movies, right?

Happy quilting!
Katie
Posted by Katie at 9:18 AM

I'm certain you experienced High Anxiety during your cross-training! Glad you survived it and got home safely. Your points and curved piecing looks great to me! Get on with it; I want to see the finished quilt! --"Love"

You had quite an adventure on your cross training. Being out and about sounds like fun. The stuffy office with charts and numbers...not somuch.
I love your Christmas Pickle. It is going to be a beauty.
Don't forget to get a little rest today.

At least you had a change of pace for a few days and that can be nice. I can't wait to see the pickle quilt, so you better finish it by Christmas! It looks wonderful so far.

I'm glad you had a safe and interesting trip. I love how your pickle dish quilt is turning out. More pictures as progress allows, please!

Never a dull day it seems. My family (aunts/uncles) used to have a dairy farm which I visited a few times as a wee lass. Very smelly, but fresh milk, homemade cookies (Anzac biscuits) and chicken soup are strong memories. Two years to finish a quilt is nothing. My personal best is four years. Your pickles look fine. Not sure I'd even attempt sich tricky piecing.

Cross training sounds stressful and the driving in unfamiliar territory can be scary but you survived and learned some new stuff, so it turned out great! The quilt looks amazing but I can see why it had to age a bit before you started it. It will be gorgeous!