After a long weekend at an awesome quilt retreat, I'm home again and can FINALLY share with you a baby quilt!

I've shared a few sneak peaks here and there of this quilt...I think...but I can't seem to find any of them...so I guess you'll just have to play along and only get to see the finished product.

My coworker announced quite a while ago that she was pregnant and had no plans to find out the sex of the baby before it was born.  She also said she was doing the nursery in grey and yellow.

That first she stuck to.  The second...well, it's a good thing I took a look at her baby registry before heading out to buy fabrics!  Not that a grey and yellow quilt would have been bad, but when I saw she had chosen a bedroom set that included blue, green and jungle animals, I had second thoughts.

I dug through my stash of patterns and found the perfect pattern.  Well, nearly perfect... 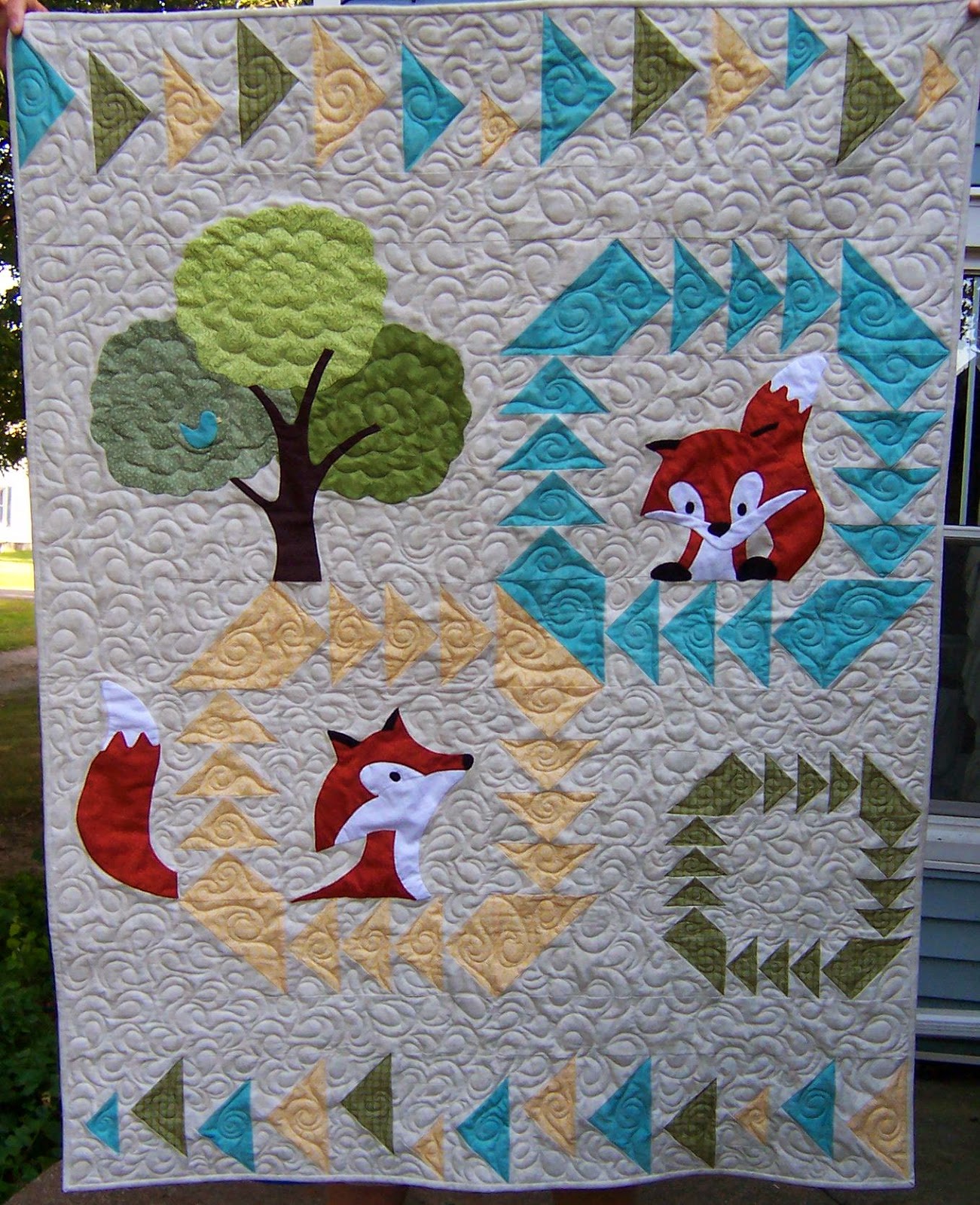 So foxes aren't exactly jungle animals, but we'll run with it.

Here's a close-up of the quilting: 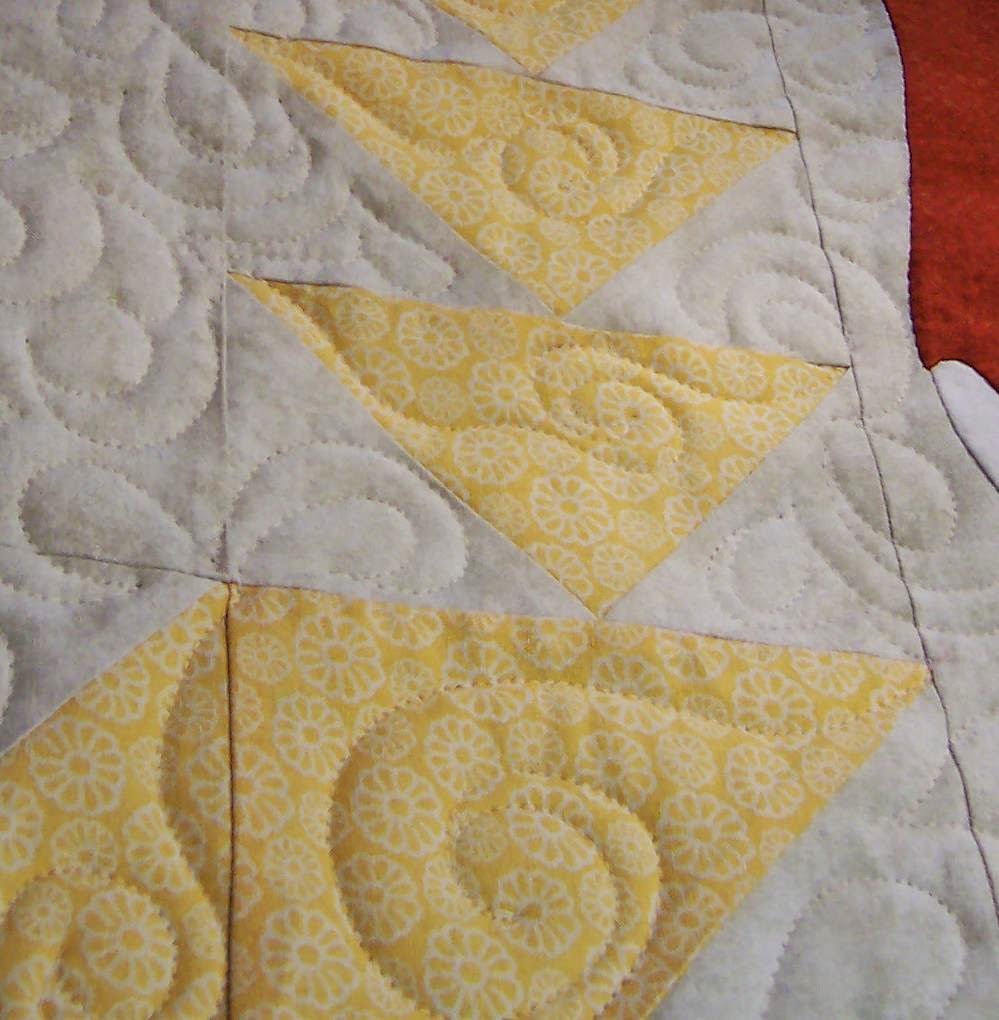 This is probably the most densely quilted quilt I've ever made, but this was what I wanted to do, and other than a few oops moments where I quilted myself into a corner, I enjoyed it.  (And the oopses weren't so bad - I know how to stop and start, but try not to do it too often.)

I got it done last Tuesday night and we were having a shower for her at work on Thursday.  And it's a good thing because at her doctor appointment Tuesday, it was decided that they'd induce her on Sunday!  She wasn't due for a few more weeks, but for health reasons, it was time.  I haven't heard yet, but I'm guessing by now she's holding her little boy or girl in her arms, falling even more in love and probably not thinking one bit about this quilt.

The quilt retreat that kept me from posting started Friday and ended today, Monday.  It was so much fun and like last year, I laughed until I cried too many times.  A lot of silly things happened, but in the middle of them, an idea to participate in float-form in a local parade evolved into something that could really happen for our guild!  (It started out that we'd somehow get electricity on the float and take our sewing machines and sew "wonky" blocks down the parade route, eating all the candy we should be throwing to the kids...)

There were many visits from the quilt fairy: 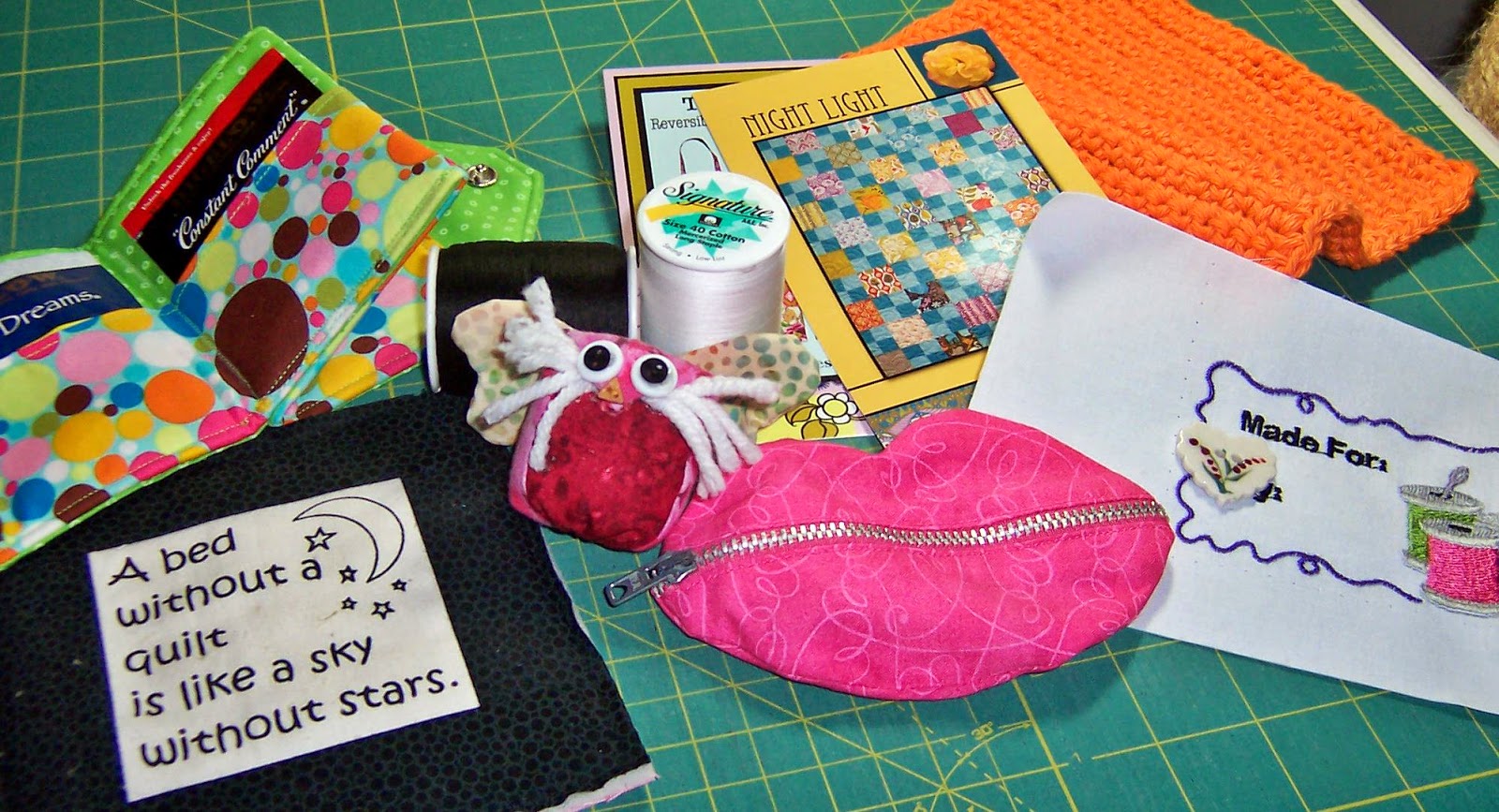 (remember those zippers I dyed?  they went into those lips, which contain lip gloss!  tutorial can be found here, at the A Beautiful Mess blog.) 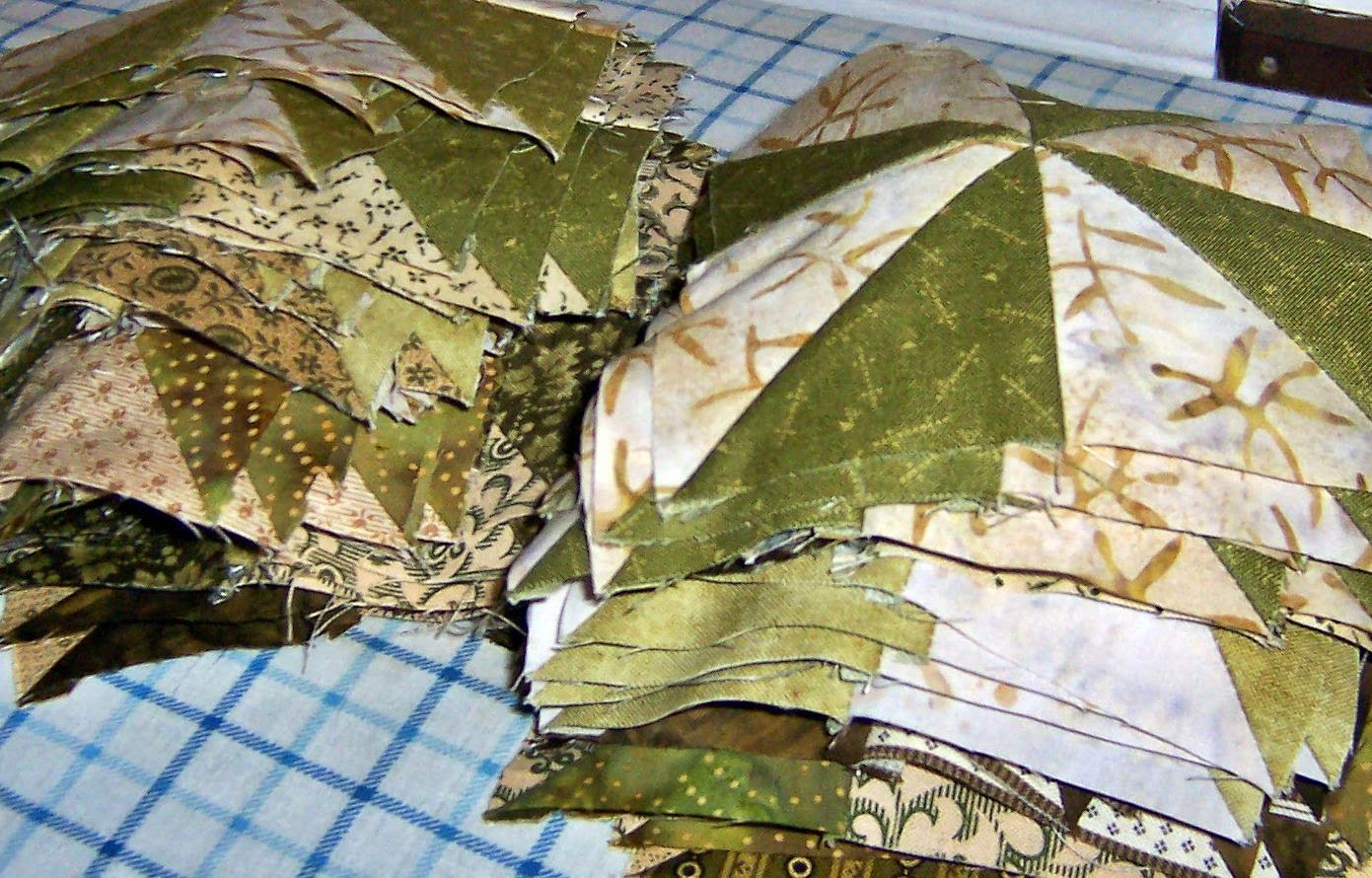 I promised to show how I make them, but didn't take many photos (I was too busy sewing!), but I will try to get something together soon to share!

Then on to a NEW project!  Remember way back in August when I shared a quilt kit I purchased at the AQS show in Grand Rapids?

Well, I FINALLY got to cut into it!  There is no one pregnant that I need to make a quilt for.  No one graduating.  No one getting married.  No one I need to make a quilt for!  So I decided instead of sewing those pinwheels onto the arc blocks, I would start something new.  (Those pinwheels and arcs are going to need to be layed out completely, then sewn together, and I didn't want to tackle that in the last half-day of a retreat.)

By the time we headed to lunch today, this is what I have:

ALL of the pieces are cut for the quilt!  I need to go through and rearrange things before I sew (another project that will require a bit of space to lay it out), but I am so excited.  I didn't really think about it at the time, but these are Cherrywood fabrics and apparently they are a big deal among some quilters.  I just thought they were pretty when I bought them, but I guess I did a good thing?  I can't wait to get sewing on these, but first real life has to get rolling again, but maybe this coming weekend I'll get some time.  (First I have to unpack the suitcase of quilting stuff I took and find all the stuff I'll need...)

I have a few more things to share, but I'd better get back to the things I need to be doing...

That by quilt is too cute! And great job with that quilting. I think you have the hang of your long arm :) I was not familiar with Cherrywood Fabrics. I'm really not up on what's trending in fabrics. I just look for something I like that will work with whatever project I have in mind. Clever you, stumbling onto a hot trend :) That purple is gorgeous, I can see why it caught your eye.

The baby quilt is adorable and your quilting is amazing! I like the lips bag - too cute! Those would make cute stocking stuffers. Can't wait to see your pickle quilt and what you will make with the grey and purple.

That baby quilt is just the cutest quilt. I love the pattern. so cute with the fox surrounded by geese. And the quilting is WOW.
That is a whole lotta pinwheels you got done. And I wonder what you are making with those pretty colors? Hmmm
Getting back to real like is hard sometimes.

I love the baby quilt, it is sooooo cute! So are the lips bag, that makes a sweet gift. Your next quilt will be stunning, I will be waiting to see progress on it. That's a lot of pinwheels, all the work will be worth it the pickle quilt will be wonderful, too.

Looks like you had a very productive time at the retreat; glad you had a good time! Baby will love that cute little quilt. I'll be watching for more on the "sweet" pickle quilt! ---"Love"