It's been nearly two years since I purchased the kit, but Christmas Pickle is a TOP!!!

Last Saturday evening I decided to lay out the blocks. 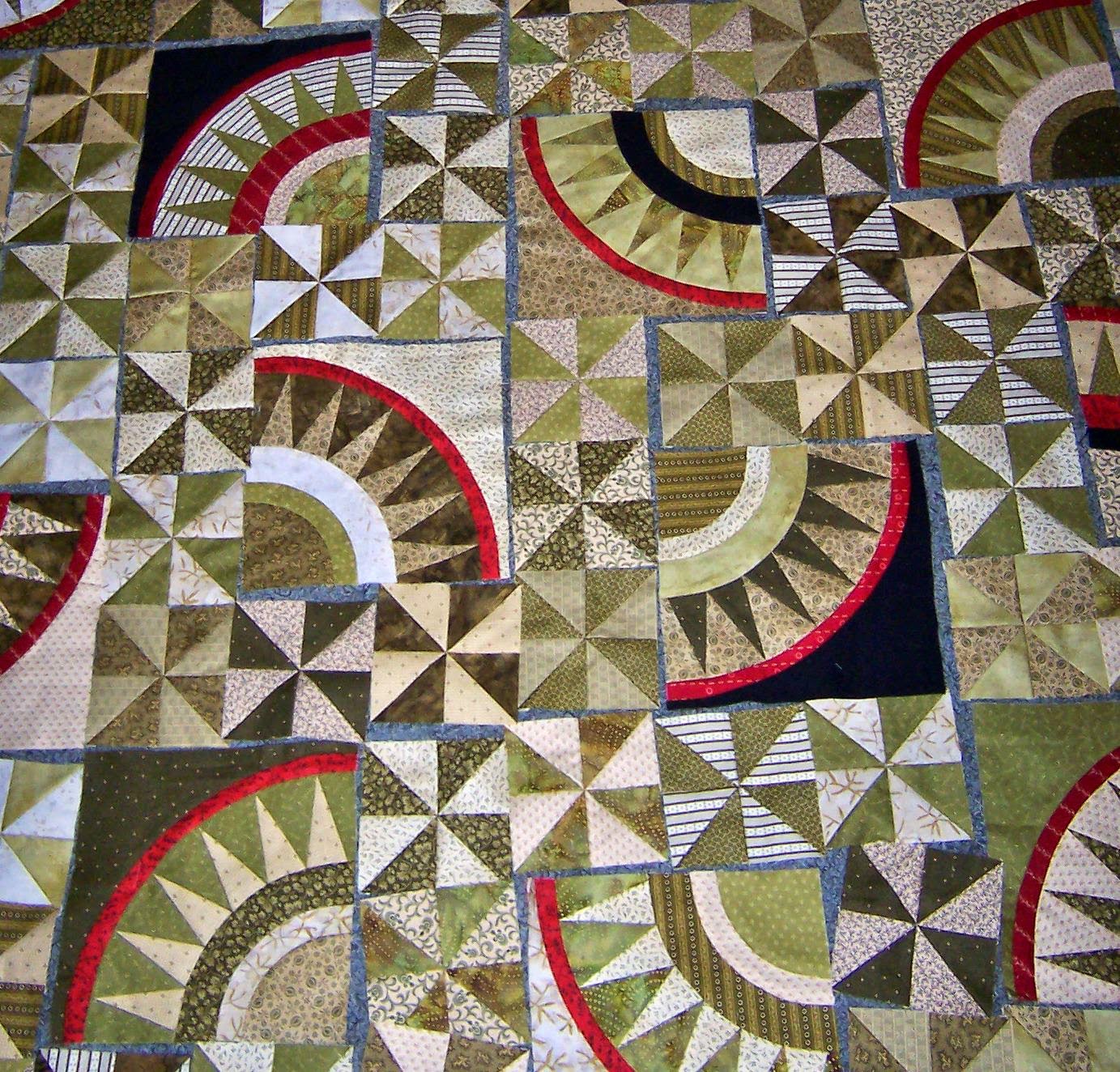 This task turned out to a little bit more effort than I initially imagined.  144 pinwheels, 24 arc blocks, nothing in traditional rows, no two arcs going in the same direction, lots of fabrics to try to make sure nobody is too matchy-matchy...it took a while, but thankfully the "helpers" were otherwise occupied.

Then I realized that I had placed everything in the middle of my living room floor.  Like most of the room had quilt pieces in it.  And that there was no way I was running up and down stairs to sew those things together and there was no easy way to get them up there and not mix things up.

This is what TV trays are for right?  (I ended up adding a second one to the left of my machine as piece got larger.)

But I got the top together that night.

And then it sat there, waiting for borders with me contemplating all the time and money I'd spent on this quilt that I wasn't sure I liked any more.  But once I get the red inner and black outer border on, I'll like it, I told myself.  That wasn't enough motivation to get them cut and sewn on, though.

And then yesterday, a couple of friends were at a nearby quilt shop and sent me a photo of some fabrics that, if the shop would still have been open by the time I got there, I would literally have dropped everything I was doing and gone to buy it.

Motivation to get this quilt done?  You bet!

So today I was up early and got started.  Trip to the quilt shop happened between borders 1 and 2, but that was close and I promised myself I'd get #2 on before I cut into the new fabrics. 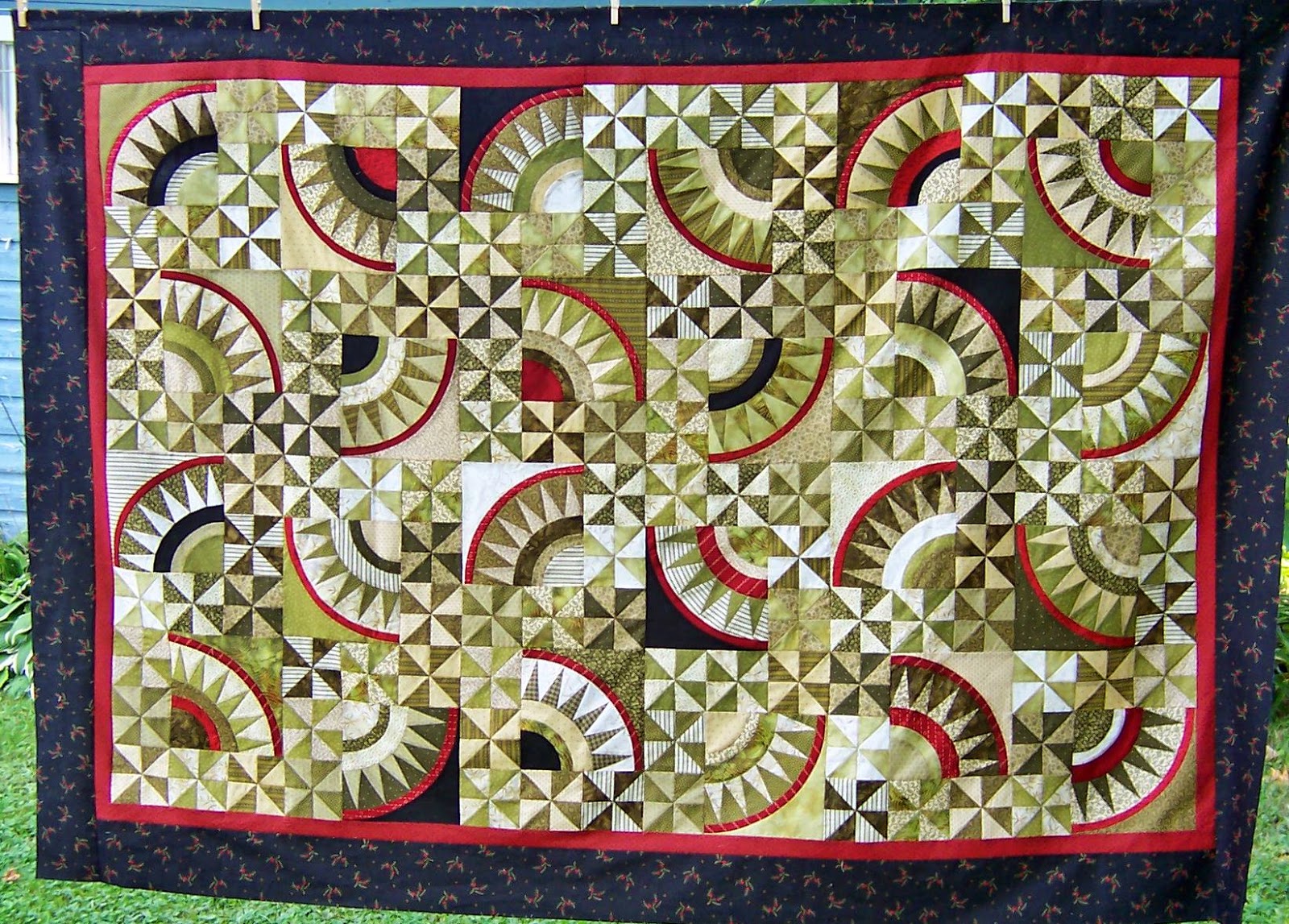 I'm still not entirely sure I like it.  The sample in the shop had more contrast between the greens and whites - there was more variety overall, too, but it's growing on me.  And I know once I get it quilted, I'll love it again.  I'm not sure how to quilt it yet, but I'll be thinking.  I don't have a back yet, but I'd like to have this on my couch come fall, so I have a semi-deadline...we'll see how that goes.

What did I buy? 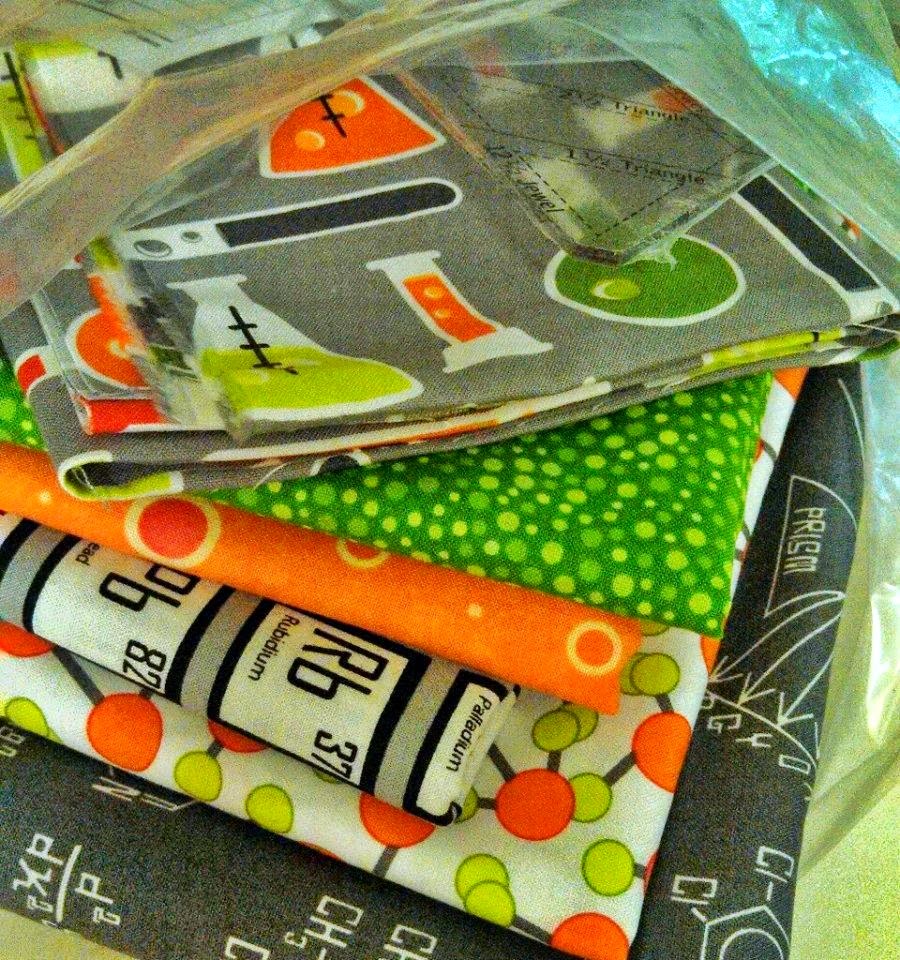 Science geek fabric!  I bought the last fat quarter of the flask fabric, the last yard of the chalkboard fabric, and then added in a few bubbly fabrics to help brighten things up and pull out the fun colors.  I think I need a couple more, but this was all they had at the quilt shop that I felt worked.  (Oh no, I'll have to go to another store...gasp!)

In that bag is also a Hex N More ruler.  Though up until now I've not had much interest in hexagons, I think this pattern lends itself VERY well to a hexagon (see those molecule drawings in there - hexagons are big in chemical structures!), so I'm going to figure this whole thing out.  If I can use templates to cut pieces and sew curves in the last project, this should be cake, right?

Now it's off to figure out just how big to make this quilt...6" hexagons add up how?  (And I have a sneaking suspicion this one may be another all-nighter to get it off my living room "design floor'...)

Wow, that is some impressive piecing! I'm sure Christmas Pickle will grow on you with quilting and binding. I love your new fabrics. Can't wait to see what you some up with for them!

In the event you still don't like your "sweet" Christmas Pickle quilt when you get it quilted, I'll be more than happy to display it for you here in my home! That is quite a piece of hard work, and I love it! You can have the new fabric instead; I wouldn't understand it anyway. I'm sure you will have fun with it! ---"Love"

Katie the pickle top is amazing. I do like the borers very much. I sure hop you love it again soon cause it is a beauty.
The science geek fabric is so cute. I know you will come up with a great design. I love hexies so anything hexie is fab! LOL
Look forward to seeing what you do with the fabric.
Have a good week.

Your Christmas Pickle is great. Even without a lot of contrast in the colors there is so much movement in there, it is wonderful! The science geek fabrics look like lots of fun, too. I can picture another fun quilt in the works!

That is just an amazing quilt top!!! It will be awesome when you get is finished. I'm sure you will come up with a good quilting design. The science geek fabric looks interesting, but I'm kind of with Love on that. It's just not my style. Although I wouldn't be against making something with it if I had a grandchild with those tendencies.